Kitsutsuki Tanteidokoro is one of those series I knew was going to nail the ending.  You could just tell.  While there have been ups and downs, once the show’s game plan became clear and it solidly found its stride, the trajectory has been steadily upward.  And it was obvious that it had something significant to say and a good idea of how to say it.  There was a vision to this series – a start, middle, and end – and that usually means a finale that fits like a glove and elevates the entire experience. 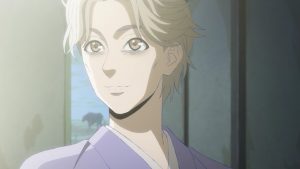 The mysteries were always the weakest part of Woodpecker Detective’s Office (as they usually are with mystery anime, if we’re honest), but even those got better over the course of the series.  And making Kayo (I never would have guessed she was 14 going on 15) the Macguffin for the final one was an interesting twist.  Still, it was the characters that made this series work as well as it did, especially Ishikawa Takuboku.  He started off as extremely unlikeable and to an extent I think that never changed, but his humanity really showed through in the final several episodes. 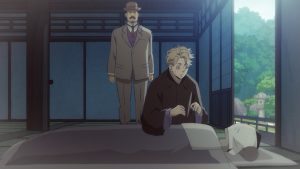 Difficult and challenging people make the best focal points for character drama, for obvious reasons.  Kyousuke, bless his kind heart, wouldn’t work without Takuboku.  He exists as a foil, an audience stand-in – and as an anchor.  His decency and loyalty keeps Kitsutsuki Tanteidokoro grounded, and when he finally snapped under the weight of Ishikawa’s perpetual selfishness it had a real impact because of who he is.  But Ishikawa’s gradual decline was the spine of this show – one of the most fascinating anime experiences I’ve had in a good while. 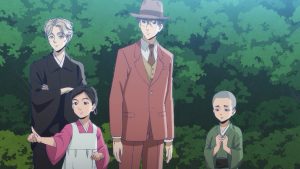 Ishikawa-san’s fate was a sad part of reality at the turn of the 20th Century.  Consumption (tuberculosis) claimed many in Japan and elsewhere, usually a slow and gradual decline with no cure.  In fact Ishikawa would go on to live for about three years after the events in this series were set, and the real Ishikawa was forever plagued by the belief that he could have contributed much more to the world as a novelist than a poet.  But he did set his tanka down in one volume, the “Sad Toys” that Kindaichi-san brings with him when he returns to their former home a decade or so after the events of the main series. 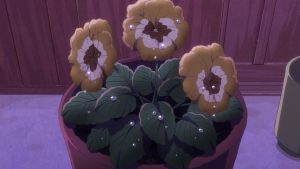 We’ll never know if the actual person had a spiritual journey anything like the fictional one did, but this Ishikawa’s journey was compelling and emotionally powerful.  The blessing and curse of consumption is that it gave most victims the time to seriously contemplate what was happening to them, and Ishikawa lived out a kind of seven stages of grief.  But what I see is that in the final moments we spent with him, he truly began to see the world through the eyes of other people.  Most obviously Kyousuke of course – the “sparkle” he strove to capture in his poetry – but others too, like Kayo. 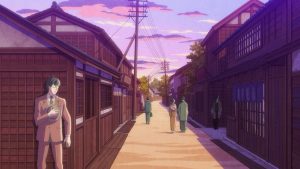 What a burden it surely was, to be as brilliant and perceptive as Ishikawa Takuboku was and have to stare death in the face as it bore down on him in slow motion.  It’s no wonder he drank and whored and turned to detective work to try and distract himself – anything to avoid being trapped in his own thoughts.  Did he experience a sort of peace in the end?  I think so – maybe “acceptance” is a too strong a word and a stage he never quite reached (though maybe he did), but he certainly felt genuine gratitude towards Kindaichi.  And he certainly seemed to accept who he was, weaknesses and all – though I’m not sure that was ever not the case. 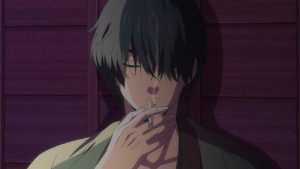 I think it takes a man with a great capacity for empathy to write the sort of poem for someone that he wrote for Kayo, so perfectly capturing this moment in her life.  And I don’t think the Ishikawa we first met would have been capable of it.  His fate changed him, and Kindaichi’s kindness did too.  The final few moments were sentimental without being maudlin.  We know what this was like for Kyousuke – how much he loved his friend, and the emptiness he felt when that friend was gone.  The power of that was allowed to shine through in quiet and dignified fashion, as Kyousuke – and we – said goodbye in our own way. 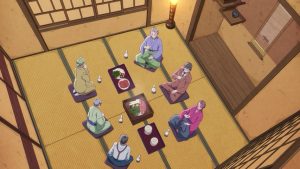 While there were certainly a few stumbles early on, Kitsutsuki Tanteidokoro wound up being exactly what I hoped it might, and even more.  This was a series that was not afraid to embrace the darkness of existence, smart and challenging and often very subtle.  It was also truly lovely, with some remarkably striking direction and art design (like the light shining through the stained glass windows in the church onto Ishikawa and Kayo).  It did fill the niche I had pegged for it, but it was something quite unique as well, with a perspective unlike any of the anime I compared it to.  Anime desperately needs series like Kitsutsuki, unprofitable as they almost always are – now more than ever diversity and intellectual ambition are qualities to be treasured wherever we find them.

Sinners of the System – All the Anime

Post Views: 72 By Andrew Osmond. PSYCHO-PASS envisions a world where Japan is a socially-ordered utopia, thanks to the Sibyl System – a surveillance giant that tabulates everybody’s “Crime Coefficient” data to make sure nobody is even planning on committing a crime. Its drama revolves around the nature of freedom and criminality in that future […]

Post Views: 277 Recently, the official website for the anime movie Eiga Crayon Shin-chan Gekitotsu! Rakuga Kingdom to Hobo Yonin no Yūsha, the 28th movie in Crayon Shin-chan’s movie series, has announced more “but not many” guests will be participating in the movie project. Ringo-chan alone will play all three characters: Ringo, Ichigo and Melon […]