Note: Since Kingdom is re-airing its first four episodes and the premiere has aired (almost exactly a year after it aired the first time), I thought it would be a good idea to top the episodic posts. New material begins with Episode 5 in the first week of May (there are a few new brief cuts in this episode).

First of all, I can’t believe it’s been six years since Kingdom 2 ended.  Time, man – appreciate it, because its passage just speeds up the older you get.  I also can’t believe I wrote 1470 (!) words on the S2 finale.  I remember admiring the writing tremendously, but I honestly don’t remember being that swept up in this series.  What I certainly do remember is how awful the production values were, though to be fair that did improve some in the second season.  I had thought we had a new studio this time in Signpost, but as it turns out they’re just a rebadged Pierrot Plus – so who knows what we’re in for on that front? 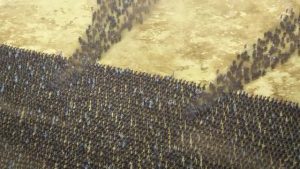 Because of the meager budget I wasn’t confident we were ever going to get this third season, despite the fact that Hara Yasuhisa’s manga is among the most popular (and acclaimed) of the past two decades.  But it did finally come around, and it picks up pretty much where the last episode left off.  That’s a problem because not only is six years a long time to remember stuff, Kingdom has among the most Byzantine and complicated plots in any anime.  It also has a bewildering array of characters – putting names to faces is murder.  And if all that weren’t enough, every damn one of them has two readings (Chinese and Japanese) of their names – and the subs and vocal track split on which one to use. 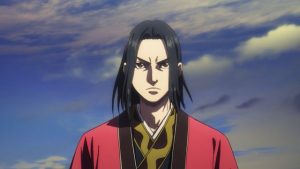 Put all that together, and to be honest I went into this premiere pretty confused.  I reread my piece on the S2 finale (that took a while), but I honestly couldn’t remember which character half those names belonged to and which kingdoms were which (apart from Qin).  Fortunately the state of affairs crystallized itself pretty clearly here – Qin is screwed.  And it’s Li Mu (I’ll stick with the Chinese readings, since I did that for the first two seasons) who’s behind it all.  As usual (I remember that much). 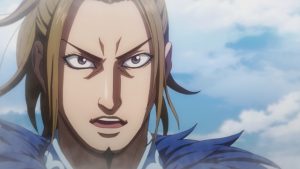 As best I can piece together what’s happening here, Li Mu has engineered a repeat of what happened 40 years earlier, when all the neighboring kingdoms ganged up on Qi – at that time the regional powerhouse, but now much reduced by that defeat.  This time around Qi is one of the cogs in Li Mu’s plan – an invasion starting with the kingdom of Chu in the south, followed by Wei to the east.  One by one Yan, Han and Qi (there’s no mention of Zhao’s army – Li Mu’s country – interestingly enough) follow suit.  The plan is to bypass most strongholds on the way, making for the heart of Qin at the greatest possible speed – the better to drive Qin’s leaders to a state of panic. 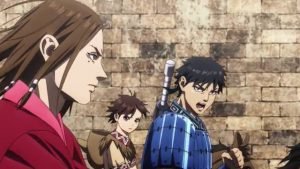 Understandably under the circumstances, that’s exactly what happens.  The court intrigue going on in Qin got a little fuzzy in my recollection, but that started to come back to me as I watched Changpinjun and Changwenjun jockeying for position.  But with the entire county about to be overrun, court politics is half-pushed to the side.  It’s up to Zheng to step up and try to bolster morale when despair is on the ascendancy, but faced with six invading armies (Zhao’s is presumably biding its time), it’ll take more than rousing speeches to save the day. 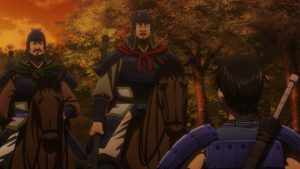 What of Xin?  The Feixin Force is being yanked around by bad intel and constantly changing circumstances, and for the moment following Wei’s huge invading army.  But against an opponent a hundred times their size there’s not much they can do, and I suspect it’s going to be on Diao’s shoulders to figure out what’s really happening based on limited information, and guide Xin and his men to where they can do the most good.  Changping’s plan seems to be to attack an undefended Qi – but while I certainly get that with their army marching on Qin the home front would be vulnerable, it’s hard to see how that helps against six armies marching on the capital. 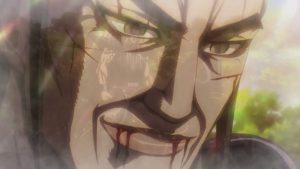 I got back into the swing of Kingdom faster than I expected, though it’s probably going to take a few episodes before I feel really up to speed.  I have missed this show because there’s just nothing like it in anime – this is a military epic in every sense of the word, and as always rousing entertainment.  What’s more the visuals, while still nothing special, certainly look to have improved again.  I’m not hoping for sakuga here, but Kingdom is such a good story that as long as the production values are at least not so bad as to be a distraction, that’s enough.