Kia Sportage Review: What is the rival of Honda CR-V and Mazda CX5?


In the high-ground 5-seater segment, this year, Kia has invested more in Sportage representatives. This model promises to cause many competitors to have headaches in finding sales.

Kia Sportage is Kia’s 5-seater high-rise model which is highly appreciated by users in the world for its exterior and interior design. In the new version, this model is brought by the manufacturer with significant improvements in exterior design, escaping the unfortunate minus points of the previous generation. Hopefully, this year’s Kia Sportage will gradually regain its position in the 5-seater crossover / SUV segment, becoming a serious competitor to models from the world’s leading automotive brands: Hyundai Tucson , Honda CR-V, Mazda CX-5 … 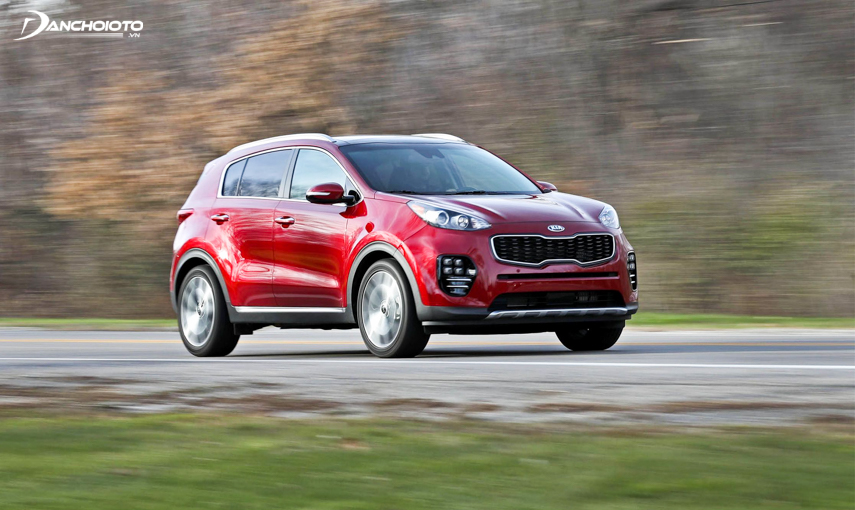 Review Kia Sportage on the exterior

In terms of exterior design, the car is not much different from previous versions. Kia Sportage still owns a sporty appearance and attractive style in exterior details, especially the front. The vehicle has an overall dimensions x width x height of 4,470 x 1,854 x 1,645 mm, wheelbase reaches 2,669 mm.

Regarding the design of the car, Kia Sportage possesses a quite sporty and aggressive style. Especially in the headlights and fog lights. The car uses a tiger-shaped grille featuring Kia doors. This set of grille is painted dark for the overall sporty front end. The bonnet of the car is strikingly sculpted with two embossed ribs extending from the grille to the windshield, providing a harmonious and rigid front end design. 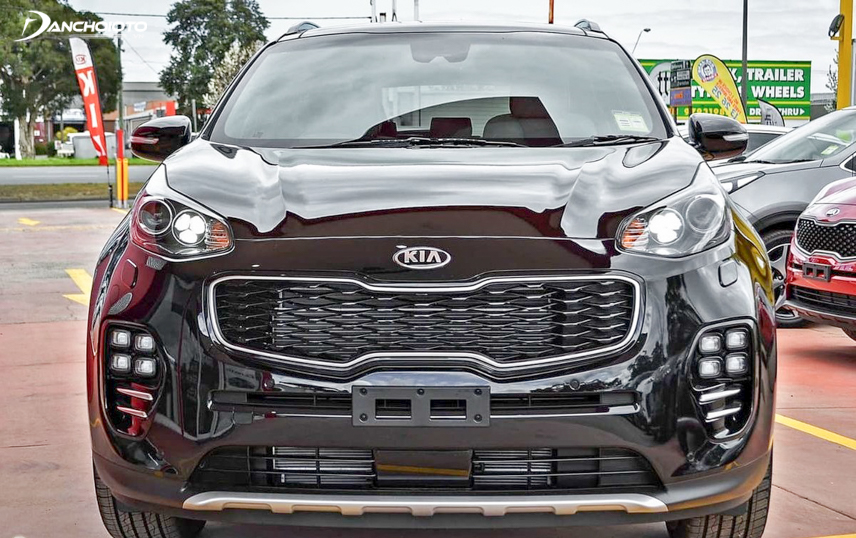 Sportage has been given by Kia engineers to a beautifully curved headlamp design. This HID headlight cluster is equipped with automatic turn-off feature of modern lamp wash. In addition, the LED strip of daytime positioning lights has also been more eye-catching by the redesigned company, which also comes with LED fog lamps with 4 single shadows hidden in sophisticated lamp holes. With this design, Kia Sportage proved to be superior to rivals thanks to its impressive and fancy feeling for users.

The wheel cavity is made higher, the window frame is refined more beautifully than the remarkable points of this model compared to the previous generation. On the body of the car, Kia uses extended folding elements for the purpose of giving the overall body a strong look. The car uses a 5-spoke aluminum alloy wheels with a beautiful design in an attractive tower shape with 3 sizes ranging from 17inch to 19inch. 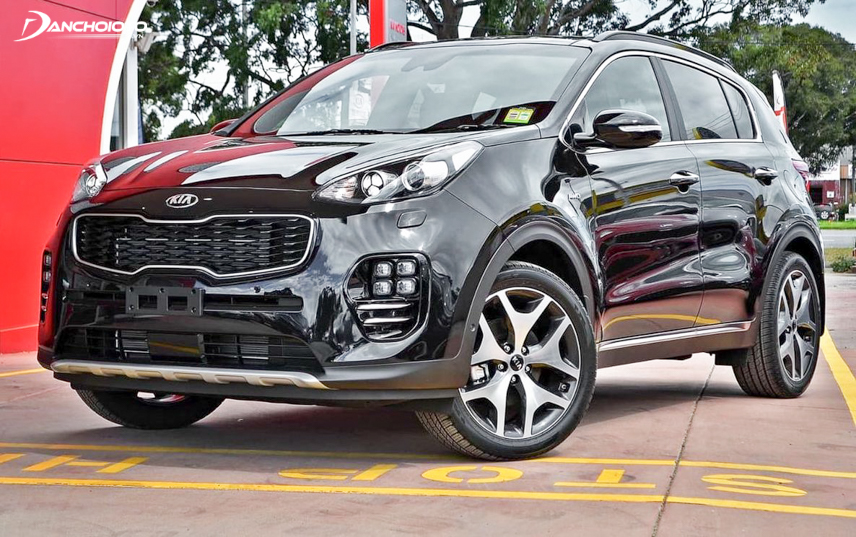 Wheels have a unique design

Kia Sportage uses rearview mirrors with adjustable function, electric folding with integrated turn signal light. On the EX and SX versions, Kia retrofits the car’s rearview mirrors to feature anti-freeze heating. This feature is especially appreciated by users, including Vietnamese users, thanks to the limited blind spot due to the complicated weather. Regarding Sportage’s door handle, this detail is painted in the same color as the body, the upper edge is luxurious silver plated.

Compared to the previous generation, Kia Sportage rear end is not so much different. This model still owns the bold, sporty tail. The rear uses a pair of LED technology tail lights with 3D design and is divided into 2 independent areas. In it, one is mounted on the door of the luggage compartment, partly located close to the rear bumper of the car. In general, this design helps Kia Sportage to be completely different from rivals, an adventurous design style but bringing many remarkable successes. 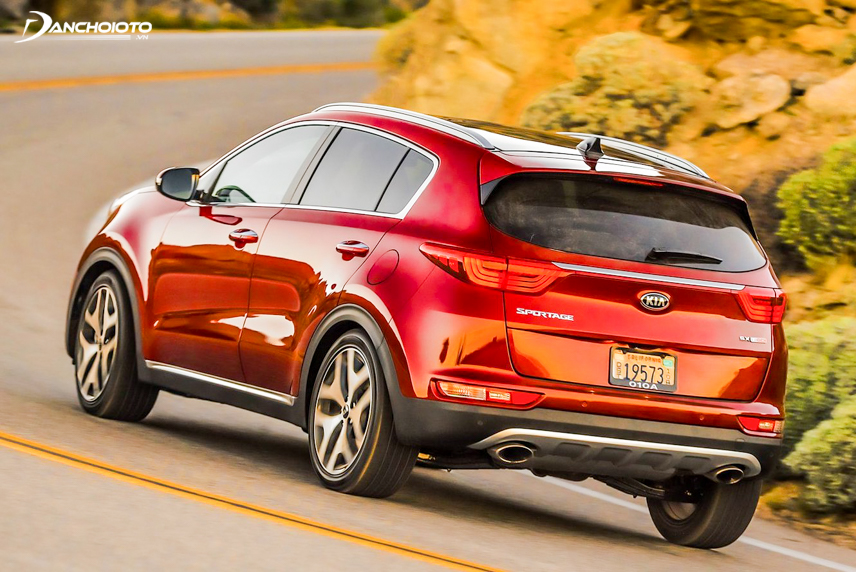 The rear end of Kia Sportage

Most Kia Sportage users consider this model to have a rather aggressive rear end, better than the Honda CR-V or Mazda CX5 from Japan. The car uses a silver-plated plastic bumper with large ribs to make the rear of the car more attractive. In addition, the 2 exhaust pipes are also redesigned more closely with recent designs, the rear glass is also equipped with rain wipers to increase visibility when driving in the rain.

The car is equipped with an additional brake light located on the windscreen for more effective warning, especially in fog, rain or moving at high speed. In addition, the position of the license plate, rear camera slot, rear door handle and car logo are also maintained.

Review Kia Sportage on the interior 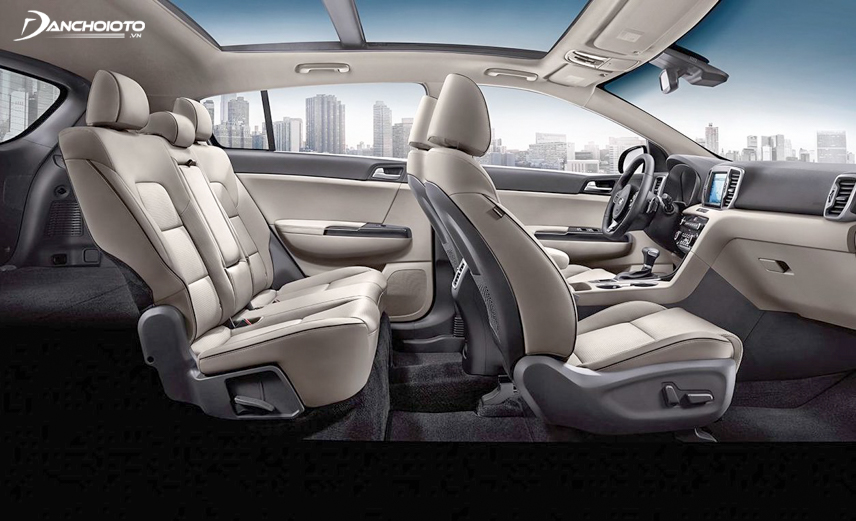 The space between the rows of seats is quite spacious, so passengers in the third row can sit longer in the car without getting tired as much as other models. Vehicles with front seats are electrically adjustable, sporty design embraces the back of the user. The third row space on Kia Sportage is quite ample for 3 users. However, one drawback of Kia Sportage that many users regret is that the luggage compartment is too small. If the entire rear seat is folded at a ratio of 60:40, the luggage compartment volume of the car is only 1,700 liters, while rival Honda CR-V can hold up to 2007 liters and Toyota RAV4 is 2,075 liters.

Regarding the steering wheel, Kia Sportage uses a steering wheel with a 3-spoke sport design. The steering wheel cluster of the car is covered with carbon leather and is quite luxurious and firm to handle. On the steering wheel of Sportage is also integrated many functional control keys such as volume up and down, hands-free conversation, switching channels of the infotainment system … In addition, in the high-end version is SX Turbo, the car It also features a panoramic sunroof and an interior lighting system that adds pretty bright LEDs in the evening. 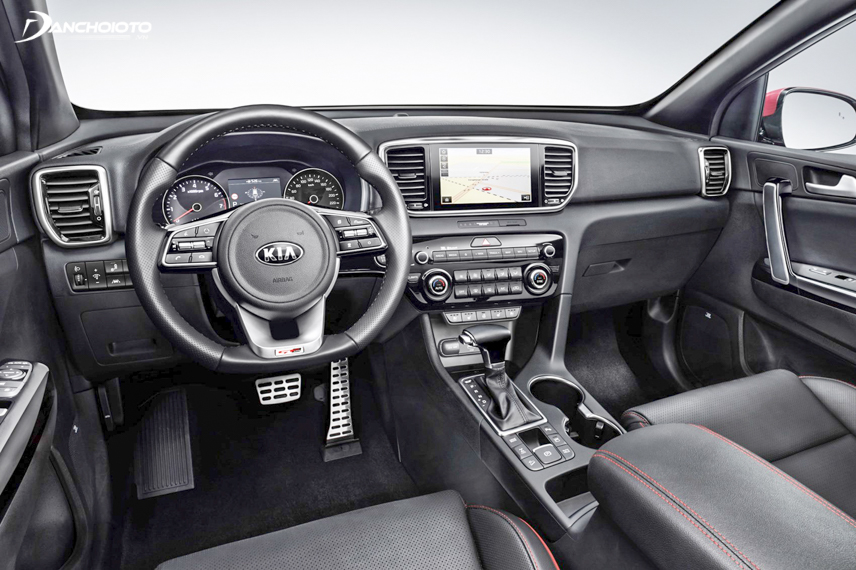 The Kia Sportage steering wheel has a sporty design

Assessing Kia Sportage in terms of equipment comfort, the model is equipped with quite a lot of modern amenities, especially in the entertainment system. The car has a 6-inch entertainment screen and a large-capacity 6-speaker sound system. This audio system can be connected via USB, Bluetooth or a new UVO entertainment system that can connect Apple CarPlay and Android Auto. A special feature of UVO tool is the ability to control features such as satellite navigation, voice commands, parking reminders according to regulations and diagnose the vehicle’s operating status … 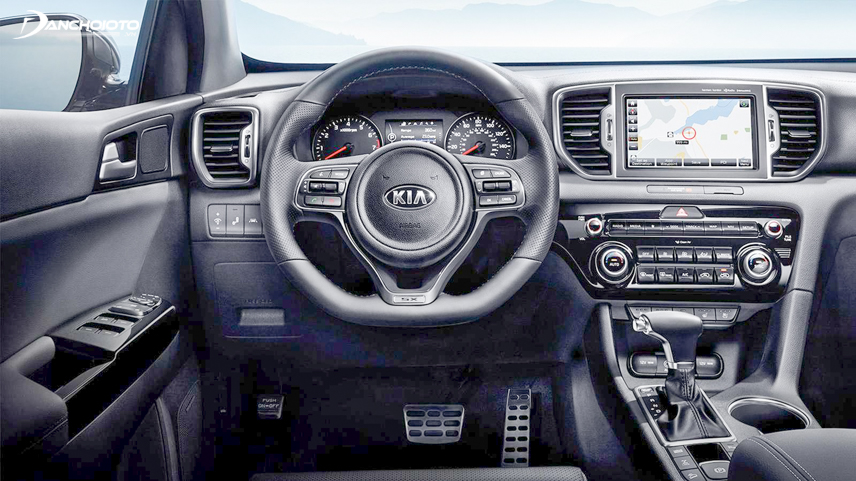 In addition, on the most advanced version is SX Turbo, the car is also equipped with 8 inch touch screen and 8-speaker system with Harman Kardon technology for excellent audio experience for users. Besides, the steering wheel will have more modern heating features and integrated sports gear switch.

Behind the steering wheel is a central display cluster with a beautiful and intuitive design with full parameters such as the number of revolutions and speed. The central area of ​​the instrument cluster is also equipped with a 4.2 inch TFT LCD screen that displays the full range of vehicle operating parameters. Kia Sportage is also equipped with an internal rearview mirror that is capable of anti-glare, panoramic camera, automatic air-conditioning system, leather seats and electric front seats.

Sensing Kia Sportage in terms of performance, this small-sized SUV gives extremely superior performance on various terrain conditions and speeds. The steering wheel of the car is quite sharp and accurate when driving at low speed. At the same time, the steering and climbing ability of Kia Sportage are also highly appreciated thanks to the reasonably adjusted torque. 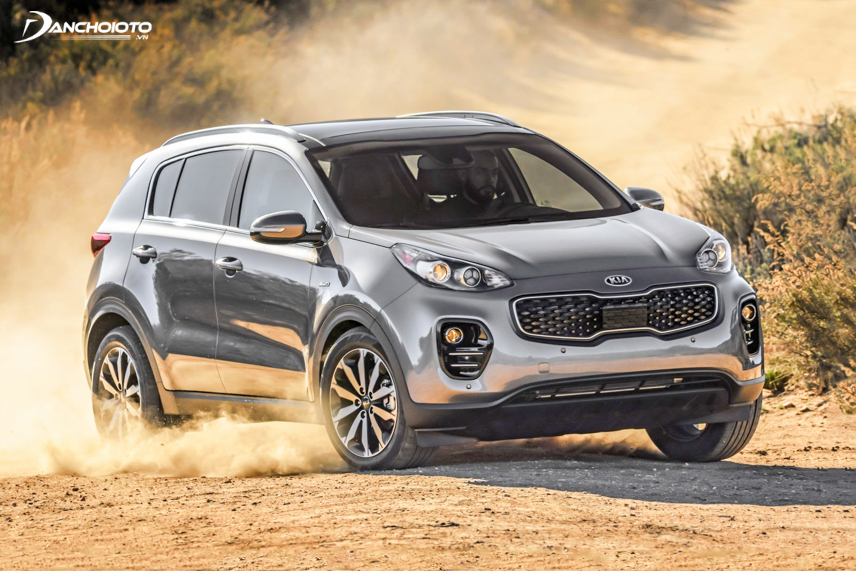 The vehicle has the ability to operate strongly on many terrains

Vehicles with brake and accelerator pedal feedback quite well in many different speed conditions. This capability makes it easier to control vehicles in crowded areas such as in the streets or in residential areas. Not only that, the stiffness of the suspension on the Kia Sportage also gives this model extremely strong off-road ability. Besides, the Korean model also has high fuel efficiency. According to the Kia Sportage specifications announced by the manufacturer, this model can run 1,000km when filling the fuel tank with a combined fuel consumption of about 6.5 liters / 100km. 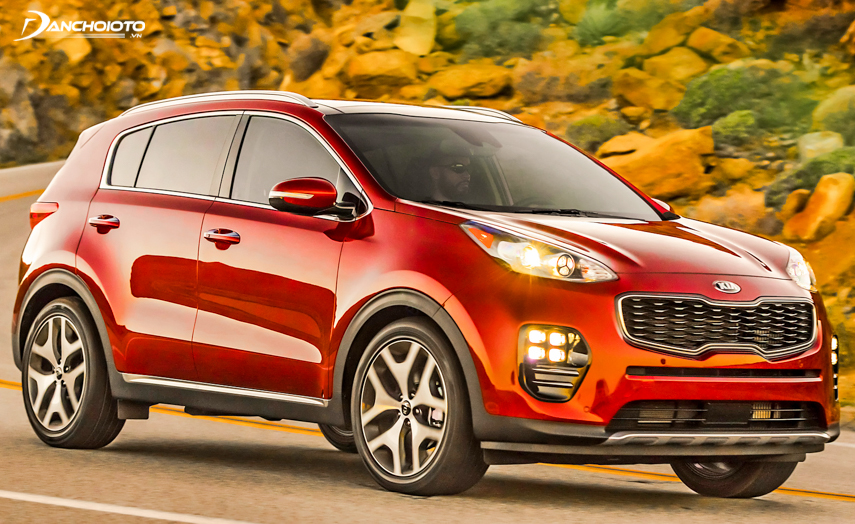 Kia Sportage is equipped with many safety functions

How much is the Kia Sportage?

Currently, Kia Sportage has not appeared in Vietnam market yet. However, in the Malaysian market, the price of the Kia Sportage diesel version of the GT CRDi Diesel is about VND 850 million. With the above price, Kia Sportage proved to be a quite prominent model when compared to the names in the small SUV segment in Vietnam. This model also owns a lot of modern equipment and beautiful design, which will certainly be a reasonable choice for many domestic users.