Software Windows Media Player provides users with many shortcuts to make the operation easier and more convenient. With just one shortcut you can play or pause songs, show or hide album information, or even copy currently selected files to a CD or other device.


As a music player and software watch MP4 movies and many other fairly professional formats, Windows Media Player gives users the best and simplest experience without having to install many software. See also: How to use Window Media Player 12

– Alt + A: Modify the created playlist
– Alt + C: Copy the currently selected files to a CD, or other device
– Alt + L: Stop copying files
– Delete: Delete the currently selected files
– Ctrl + 2 times + sign: Make the columns Title, Status, Length, Size automatically change the width to fit the content inside it.
– Ctrl + J: Remove the CD / DVD from the machine.
– F5: Update information in the frames of the window 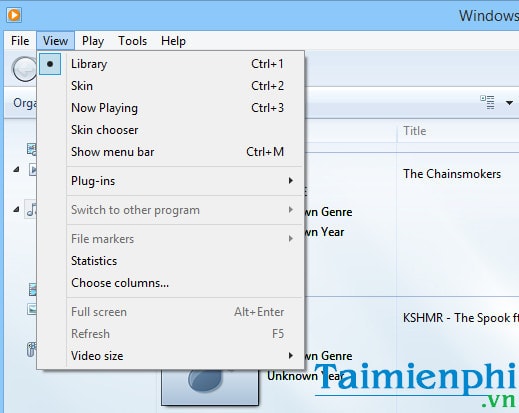 – Alt + P: Book of commands in the Play command menu.
– Ctrl + H: Play tracks, videos in the list randomly out of order
– Ctrl + T: Repeats the list when the last song in the list is over
– Ctrl + Shift + C: Turn on and off titles and subtitles tracks, videos
– Ctrl + E: Open or close the tray of CD / DVD drives

Microsoft announces their release for China