Those of you who’ve lived in Japan will get it.

Kemono Jihen just delivers, episode after episode.  We’re still in the prologue portion of the story, but you can already get an idea of how skillful Aimoto Shou is with both plot and character.  And since the anime has been about as faithful an adaptation as one could hope for, that translates wholly intact.  I feel sometimes that if Hunter X Hunter were split into two component parts, half of it would be Made in Abyss and the other half Kemono Jihen.  Putting those two together gives you an idea of just how stupendous H x H is – but then it is arguably the greatest action shounen ever written.  I’ll take either of those halves all day and twice on Sunday, thanks very much. 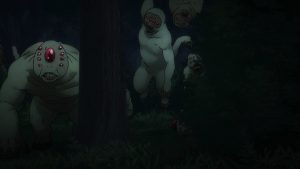 It would be too simple to say that MiA got the seinen genes and Kemono Jihen the shounen (though Hunter straddles that demographic border like few series have) because while Kemono is a classic shounen structurally, it’s one of the more seinen-themed shounen around.  There’s a kind of existential despair to the dark events in this series, and a cold detach to the way the narrative (and often the characters) deal with them.  What happens to Shiki here is brutal on so many levels, starting with the fact that the perpetrator is his uncle, but even as he snaps (in Nobimaru’s words) under the emotional weight of it, events just keep grinding along. 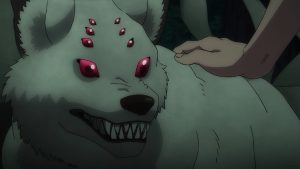 These “siblings” of Shiki’s are indeed terrible to behold, and all the more to listen to as they obliviously parrot the words of love Shiki’s mother Kumi (Hisakawa Aya) uttered in her suffering.  Does Shiki feel anything as Kabane coldly (no other word fits) dispatches them?  It’s hard to say, because his despair crowds out everything else.  Equally of interest is what Kabane feels during all this.  When Tademaru with unmitigated gall scolds him for killing them, Kabane responds that he “won’t kill them if they leave me alone”.  But they won’t of course – they’re acting to protect Tademaru. 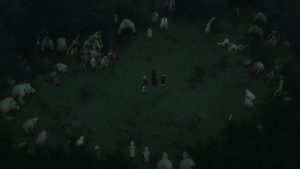 I think it’s almost impossible to watch a scene like this play out without thinking of Gon when you look at Kabane.  There’s an alien quality to both these angelic young boys – a purity than can be in turns endearing or terrifying.  Kabane’s sense of loyalty is fearsomely strong, and he’s not above being fueled by rage (as with Gon).  One gets the sense that not only would Kabane do anything for a friend in trouble, but that he could do anything.  When he’s fully engaged in kemono mode, what can stand against him?  Nobimaru perhaps – we haven’t seen anything like his full strength (the moment when he plays damsel in distress to Kabane is hilariously telling), but even that seems uncertain. 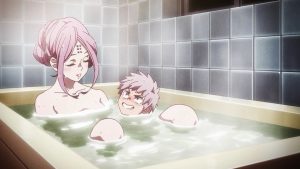 Meanwhile Inugami-san has been injured in the act of defending a near-hysterical Akira – bitten be one of Shiki’s venomous relations.  A young girl (Hondo Kaede) – who we briefly saw in the village, staring at Shiki – calls off the dogs and promises to lead Inugami to a place where his arm can be cured.  This turns out to be a natural spring with healing waters and it does indeed neutralize the venom.  But the girl (called Aya) wants something in return – for Inugami to keep Tademaru alive until Aya can find out the location of something very important to her. 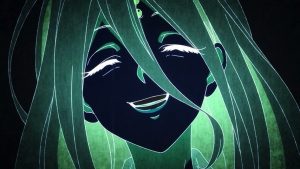 We’ve seen so much evolution from Shiki since he was introduced, but there was always more to him than his initial impression.  He’s capable of admitting his own weakness and owning his mistakes, and of expressing gratitude to Kabane for being strong when he was weak.  He’s also a big enough person not to want to kill his uncle out of rage, though he would certainly be justified in wanting to (and indeed Kabane is more than willing).  Tademaru tries to use his knowledge of what Aya is looking for to leverage his survival, but Inugami has been playing this game too long to be fooled – and he has Mihai (however grudgingly) in his corner.  Finding the cocoon Aya seeks is straightforward enough – but what Shiki finds when he does is not. 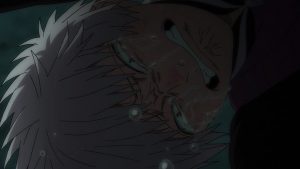 Nobimaru is a fabulously entertaining character to me, and fills many important roles in the story – as he certainly does at the close of this episode.  For Shiki what matters is not Tademaru but that his mother is alive, albeit unconscious.  But Inugami’s network has a contingency for that, a clinic in Tokyo that specializes in kemono cases, run by Ohana-obasan – clearly an old friend.  Shiki insists Aya come along for that, being his younger sister and all.  The “and all” part is not insignificant, since Aya is also the golden thread that was the aim of all of Tademaru’s nefarious deeds. 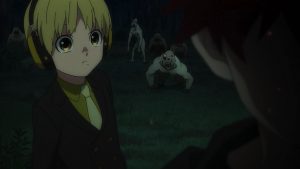 While this arc obviously acts primarily as Shiki’s origin story, it’s also illustrative when it comes to understanding the mythology of Kemono Jihen.  Kemono are indeed terrifyingly powerful beasts – but this is a world dominated by humans, and they’re also vulnerable to exploitation by humans who know of their powers.  As someone who patrols the border between these two worlds Inugami – and those close to him – must act as a last line of defense for both sides.  And that’s something Kabane in particular, given his origins, is uniquely positioned to do.