Kemono Jihen has been the Rock of Gibraltar of the season for me.  As an adaption it’s been religiously faithful to the manga, right down to the pacing (which doesn’t discourage me from thinking a second season hasn’t been ruled out).  It’s been consistently good week after week.  It doesn’t come as any sort of surprise to me as I knew how good the manga was, though there is as a sort of relief in seeing the anime get it just right.  I’ve always known what to expect from it, it’s never let me down, and never given me any reason to feel disappointed (unlike Horimiya, as good as that’s been). 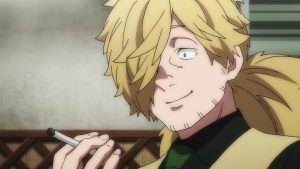 I’ve also enjoyed the process of seeing the world discover this series, which has gone over quite well both in Japan (where manga sales have gotten a big bump) and in English.  It seems to have a way of setting up expectations in people only to defy them, and that jibes with my experience with the manga.  There are times when Kemono Jihen resembles a very traditional old-school shounen, but it incorporates a lot of elements we rarely see in shounen (or any other demographic).  It’s very modern and very edgy while appearing very old-school, and I think that dichotomy is a major key to its appeal. 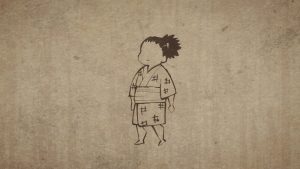 We’re now entering a stage where the gloves are really starting to come off, and it’s clear than the start of Shiki’s origin story has made quite an impact with new viewers.  All I can say is buckle up, Buttercup, because this ride is just getting started.  Kemono Jihen is pretty much fearless and respects no boundaries, much like that other shounen with cute kids as the central characters which starts rather innocently.  “The Tale of Nishikigumo” may seem like a cute folktale, but it’s the jumping-off point to something very dark and disturbing.

Shiki’s decision to finally let Inugami investigate his past takes the quartet on a road trip into the mountains, where they meet up with Shiki’s uncle Tademaru Akio (Ishida Akira).  He’s the younger brother of Shiki’s father, the human half of his lineage, and a folklorist by trade.  While Kabane and Akira shop for souvenirs and eat ice cream (Inugami ensures that Shiki has privacy for this part of the family chat) Tademaru-san fills his nephew in on the hard truth – his parents are dead, his father before he was even born and his mother when he was five. 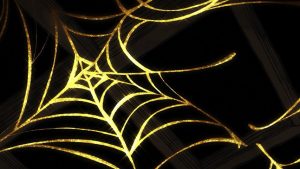 Kabane shows again something we’ve seen from him before – he has a keen emotional radar, even if he doesn’t know what to do with it yet.  He immediately senses that Shiki is overcompensating for his disappointment by acting cheerful, though Akira scolds him not to be so blunt about it.  The trio are joined in the bath by Nobimaru, who’s tailed them (pun intended) up from Tokyo.  They head into the forest to watch the fireflies, and Nobimaru – who humbly refers to himself as the “least of the least” where kitsune are concerned – casually tries to play on Kabane’s own desire to find his parents to drive a wedge between he and Shiki.  But Kabane is immune to that sort of enticement, without an ounce of envy or deception in him (as Nobirmaru wryly notes). 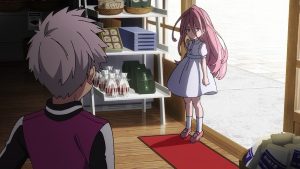 Nobimaru, as always, knows more than he’s letting on – about Tademaru, too, who was on Inari’s blacklist for trying to sell golden spider healing silk on the black market.  Shiki was very young when he lost his mother (he’s played as a child by Kumai Motoko, which means we have Goro and Daigo in the same episode) but the sight a familiar tree in the woods starts the memories flooding back – memories which lead him to a truth very different from the one his uncle was selling him.  He pledges to kill his uncle if what he remembers is true, fully expecting Kabane to try and stop him – but Kabane offers no resistance at all.  Loyally supporting Shiki is the only thing that makes logical sense to him. 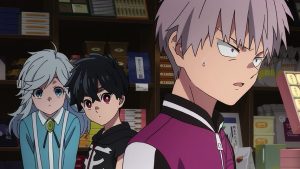 Inugami always has these boys’ backs, and so is the case here.  He’s known about the uncle all along, it seems, and now he makes sure Shiki knows the truth too.  And a terrible truth it is, exactly as the five year-old Shiki saw it.  What’s really interesting here is that Tademaru makes no effort to hide the facts from Inugami, because he clearly believes he’s done nothing wrong.  How Inugami reconciles himself with what Shiki intends to do know, as well as the identity of the strange watcher and the voice in the woods, is a matter for next week’s episode to sort out – but you can rest assured, the anime will tell that story exactly as Aimoto Shou intended it to be told.  And that’s an awfully nice thing not to have to worry about.