In contrast to Kai Byoui Ramune, this is a series I’ve championed that’s finding a decent audience.  Of course I’ve been on the Kemono Jihen bandwagon a lot longer, being a big fan of the manga, but going into the season it seemed similarly anonymous in the West.  It’s certainly doing well in Japan – the manga is now regularly placing in the top 10 in franchise sales and the streaming numbers seem to be quite strong.  Who the hell knows, but it sure seems like a possibility that this could get more than just one season.  I hope so, because there’s a lot of great story out there to adapt that we’ll never get to in 12 episodes. 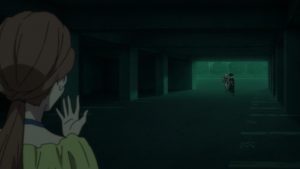 Speaking of which, if Ajia-do does intend to make this a one-and-done adaptation they sure aren’t showing it with their pacing.  We’ve covered 9.5 chapters (these are monthly, but still…) in 6 episodes, and pretty much everything has been adapted.  As a fan of the manga that makes me happy, because the writing can stand or fall on its own merits as people judge Kemono Jihen on its own terms.  The Horimiya anime is wonderful but the frenetic pacing is robbing it of some of its nuance, especially where the supporting cast is concerned.  That’s not the case here – this adaptation is both faithful and extremely effective. 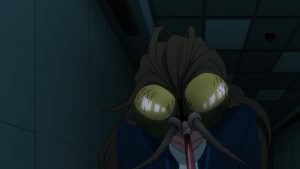 The situation inside Bugbite it tense as we rejoin the story.  Shiki is wrestling with his own demons as Mihai goads him on, and Kabane and Akira head towards his location.  Kabane takes down one of the younger mosquito sisters with no trouble at all, which Mihai uses as fodder in his emotional assault against Shiki.  The NEET vampire keeps pushing and pushing until Shiki snaps (and rather forcefully where the spy car and his hand are concerned).  One thing about mosquitos is that they do hunt by scent, especially for sweat – and Shiki has plenty of that to go around in his present condition. 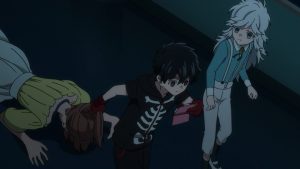 Shiki manages to trap the other mosquimouto like- well, a spider and a mosquito.  But the eldest, Reika, arrives just after Kabane and Akira, and she’s not exactly a sentimentalist based on how she deals with her sisters’ failure (this still freaks me out as a anopheliphobe).  Once more Mihai uses the power of words here, as Kabane struggles to channel the roiling power inside him after Shiki and Akira are taken out by the now powered-up Reika.  The thing with Mihai is, he’s doing this out of boredom, and these events have amused him up to this point.  But there’s not much point if the boys are killed here – that would make things really boring, and he’d have to deal with a really pissed-off Inugami to boot. 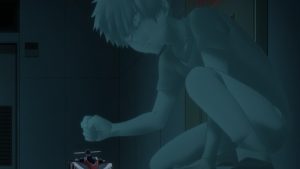 Mihai’s advice to Kabane – channel your kemono side and don’t be limited by your human side – does the trick, and Kabane unbound is more than a match for even a powered-up kanonba.  With the lifestone Kabane can use his kemono power without being a slave to it, at least in theory.  But before he’s forced to reluctantly finish Reika off, a now-freed Inugami (Mihai can read the room) calls him off and a new entry arrives on the scene.  Nobimaru (Shimono Hiro) is another kitsune in Inari’s employ, and he makes it clear that what’s been going on at Bugbite is not acceptable on her turf. 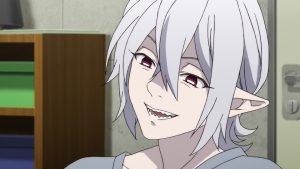 This little scene with Kabane and Nobimaru is full of subtext, and it’s pretty obvious immediately that Nobimaru is someone to be wary of.  Kabane is clearly uncomfortable with wiping out the kanonba altogether, but logically he can’t refute Nobimaru’s assertion that there’s no choice.  Nobimaru shows a keen interest in this new wild card on the scene, and offers him a piece of free advice – be careful, because Inari-sama is still laser-focused on the lifestone (even if she isn’t willing to declare was on the tanuki by taking it through force).  Inexperience and naive Kabane-kun asks the right question – why would Nobimaru share this information?  “I hate Inari-sama” the fox in shota’s clothing whispers to him – and Kabane can make of that what he will. 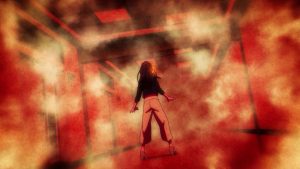 My favorite moment of the episode, though, comes back at the office later that night.  Kabane can’t sleep and can’t understand why, and he finally goes to listen to Akira and Shiki’s heartbeats to make sure they’re alive.  Kabane and Kemono Jihen have a lot in common in that it’s easy to miss everything that’s going on beneath the surface with both.  Kabane is an impassive boy but he’s someone who feels things very intensely and deeply, and a person of immense compassion to boot.  And beneath the seemingly traditional shounen structure to this series lurks a ton of nuance and real darkness, always ready to grab you by the throat when you’re least expecting it.