I remember being seriously creeped out by this arc when I read it in the manga.  But then, I hate mosquitoes – I know everyone hates them, but with most people (living outside the tropics anyway) it’s more of a casual thing, because they’re annoying.  They viscerally freak me out, and if I get one in the house I literally can’t rest until I find it and kill it.  If one’s in the train car I give up my seat and walk to the next car.  One night I struggled to find one in my bedroom for an hour and failing, closed the door and went and slept on a chair in the living room.  I hate mosquitoes. 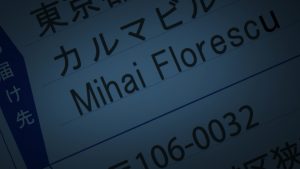 Before the sucking begins (and it was the only part of this episode that sucked) Kemono Jihen has lots more interesting stuff to dish out.  That starts with the next introduction of another great cast member, Mihai (Ono Daisuke, who sings the OP).  This series has a very deep bench – even if it only ever gets one cour (and I’m somewhat hopeful that won’t be the case) it’s still not done rolling them out.  Mihai is the one that lurks behind the door at the end of the hall that Inugami warned all the boys never to open.  But Kabane gets too close due to his full-bore commitment to cleaning, and the beast is loosed upon the office. 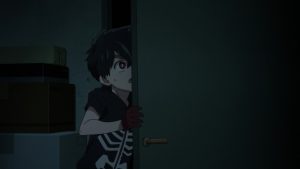 Mihai (a very common Romanian name) Florescu is a vampire, someone who Inugami took in because he was bored with his limitless existence and looking for distractions.  Like all vampires he has superhuman strength and intelligence, and he’s useful to the agency as a general IT whiz – especially as Inugami states that he’s hopeless in that area.  But he’s also a sort of hikikomori who stays in his room out of choice, not neuroses.  And in Kabane he sees a perfect-made slave in the making – obedient, naive, experienced as waitstaff, and diligent in any task he’s assigned. 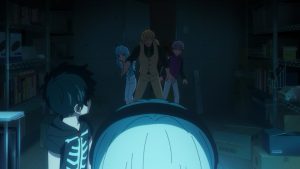 All efforts to extract Kabane from this new assignment prove fruitless, and he eventually offers the lads the chance to arm wrestle him for Kabane’s emancipation.  That’s hopeless of course – Akira at least is smart enough not to even try – but Kabane does manage to break Mihai’s wrist during his matchup.  While Kabane goes off on another of his chores, shopping for dinner, Mihai – unable to indulge in his MMORPG thanks to his wrist and restless – gets really frisky.  He accepts a dangerous job and, when Inugami proves resistant to the idea of letting the kids handle it, Mihai promptly locks him in his room.  I imagine the greatest opponent any immortal being of great intelligence would face is boredom, and that makes a man like Mihai exceptionally dangerous. 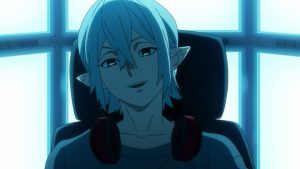 During that shopping trip Kabane has another encounter with Kon, who appears to be living rough in the park and falls out of a tree practically onto Kabane’s lap.  He dutifully zips his hoodie over his head but not even Kon is dense enough to fall for that again.  And she has bigger problems – Inari-sama appears to have thrown her over for another kitsune (stay tuned).  Kabane himself is troubled by how weak Mihai made him feel (he has no idea about the wrist) and his ability to protect his new family.  So he challenges Kon to a fight to test himself, which he wins rather handily – which sets Kon off on a bout of self-pity that even the superficially impassive Kabane is rattled by. 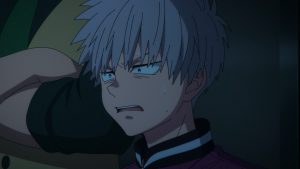 I love that Kabane wouldn’t just walk off and leave Kon in that state.  He’s incredibly sensitive and empathetic without the emotional experience to even realize that about himself.  He even invites Kon back to stay at Inugami’s, but she refuses on the grounds that a kitsune can’t cohabitate with a tanuki.  Kon has a better idea – Kabane can live with her at the park, eating squirrels and birds.  He demurs on the grounds that he has a task to fulfill (procurement of dinner) but promises to return after he’s completed that task. Dinner will have to wait, thanks to Mihai.  He’s not remotely interested in the job itself – he just wants to amuse himself by watching the boys try to handle an assignment that’s above their pay grade.  He tags along in the form of a hi-tech model car, and Shiki – anxious to try out some new arachnid camo techniques – is the point man with Akira and Kabane as backup.  The target – Bugbite Electronics.  It’s a notorious black company that had 16 suicides in one year, changed ownership and mysteriously dropped to zero.  Workplace reform?  Not hardly. 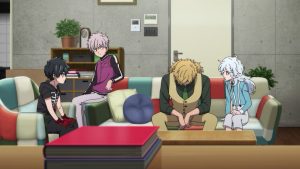 Did I mention I hate mosquitoes?  One thing about Kemono Jihen which I think is already clear is that it can go very dark – it has something in common with Hunter X Hunter in that the first few episodes (especially as they feature adorable kids) can fool you about what the show’s tone is.  We never do meet the CEO who’s supposedly responsible for the miracle turnaround at Bugbite, but Shiki’s stealth investigation soon enough reveals (to everyone, thanks to Mihai’s spy car) the truth behind the numbers.  Shiki seems quite unprepared emotionally to face this danger – and that makes him far more interesting to Mihai than when he seemed to just be an abnormally cautious and rational 14 year-old…