My relationship with hidden gem shows like Kai Byoui Ramune is rather complicated.  On the one hand it’s always nice to feel like part of a secret club, and when so few people discover (or appreciate, as the case may be) a great series that makes one feel kind of special.  In all honesty whatever I say about something like Horimiya (or Shingeki or Mushoku Tensei for that matter) doesn’t matter a whole lot – it’s spit in the ocean.  When I write about a show like Dr. Ramune or Ginga e Kickoff or Miira no Kaikata I know I’m pretty much going to be the only one talking about it in English, so to the few people interested my scribblings make a difference. 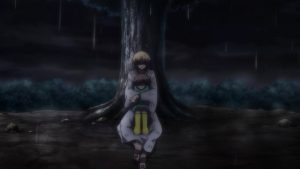 That said, it genuinely pains me when I think an anime is special and it largely doesn’t exist.  As I noted earlier this series is sort of popular in Japan, but for whatever reason (perhaps its quintessentially Japanese mindset) it doesn’t seem to cross over.  It’s always gratifying when the spoiler senses hit the mark, though.  Kai Byoui Ramune has continued to improve week upon week, and it started out pretty good.  This two-parter was certainly the most compelling of the episodic storylines so far, and it deepened everything the series started to explore in the first four episodes. 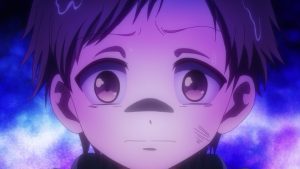 These kinds of adult folktales with their morality plays are endlessly fascinating to me, but this one was especially resonant.  It took the themes of the earlier ones in the series and distilled them down to their essence.  The stakes were higher, the emotions stronger, and everything rang through more clearly.  As Sensei tells Rio, the path to a cure is confronting the cause.  Everything else is just a palliative, and those often make the underlying condition worse.  But confronting the cause for Rio’s mother means confronting the fact that her son has probably been murdered and is never coming home. 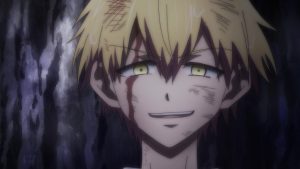 Ramune-sensei and Kuro-kun just get better and more interesting as characters every week, both individually and in terms of their relationship.  Kuro is smart, good under pressure, and mature for his age – but he’s still a child, and given to emotionally react like one.  Sensei is an eccentric and plays the doofus role to the hilt, but he’s actually a very compassionate and courageous man.  He’s so desperate to help his patients that he’s willing to take major risks to do so (the extent to which only becomes clear late in this episode), up to and including his own well-being. 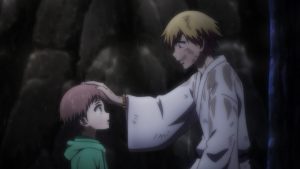 Things get pretty tense pretty quickly here.  As Rio speaks into his pearl, voice growing ever-weaker as he desperately tries to contact his mother, Kuro returns to the shrine (I guess he does have an actual home and – presumably – family) and immediately realizes something is amiss.  He has the instincts of a detective, this kid, and uses them to deduce what probably happened.  Meanwhile Ramune-sensei is clearly seriously hurt, but while he has the magical means to immediately get help, he hides that fact.  He sees this as an opportunity to cure Rio’s mother – a different one than the original high-risk plan, but an opportunity nonetheless – and runs with it. 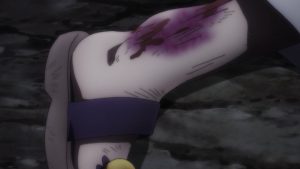 Having confirmed with his parents that Rio hasn’t come home, Kuro expertly figures out where he and the doctor are likely to be and heads off, leaving a trail of packing tape to follow.  When he finds Rio and Sensei Kuro is obviously concerned and, having first ensured that Rio is uninjured, tends to Sensei.  But he’s furious when he discovers the truth.  Ramune-sensei may have been doing all this for Rio, but by endangering his own life he’s disrespecting the relationship he has with Kuro-kun – who, it’s obvious after this interaction (if it wasn’t before), genuinely loves him. 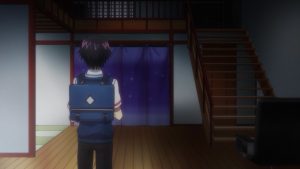 There are all sorts of really profound emotional elements to this denouement.  “It’s not a betrayal to look forward” is a genuinely insightful and powerful literary statement, and so difficult to accept in real life.  Dr. Ramune went to such lengths to try and help Rio and his family, planning all along not just for his mother to be cured but for Rio to get his voice back.  That, poetically, can only happen when he and his mother talk to each other.  He’s a formidable if reckless man, and whatever the backstory it’s clear that he and Kuro have a strong and meaningful bond (which demands further exploration).  The more Kai Byoui Ramune reveals of itself the more compelling it gets, and that’s a mark of a very good series indeed.