Especially now that Kemono Jihen has more or less been “discovered”, Kai Byoui Ramune is definitely the show anime viewers (though perhaps not so much in Japan) are sleeping on.  It’s a more awkward fit than Kemono, which is a bit quirky to begin with – this series is a shounen but one of those shounen that looks and sounds more like a seinen most of the time.  It’s published in Shounen Sirius, a haven for similarly quirky and seinen-y shounen that mostly fly under the radar (though it has produced the occasional hit, like Yozakura Quartet and Shoukoku no Altair).  It’s one of those series I look at and wonder “who’s the target audience?” – which inevitably includes me, and I know my tastes in anime generally signal commercial death. 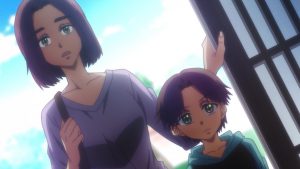 The thing about Dr. Ramune is that it’s a show that rewards patience and close attention.  It respects the intelligence of the audience, which in this case means it doesn’t explain every joke or shine a million-watt spotlight on everything that happens in the background that’s significant.  It also takes its time letting things develop, and has a bit of a nesting doll/onion quality in that it seems to reveal that there’s more and more to it as it progresses.  I thought I had a handle on this show after the premiere – and I liked it – but my take on it has evolved significantly (for the better) after every episode. 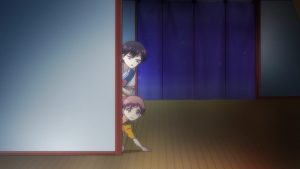 This is certainly the most riveting of the byoui cases so far, and as I suspected the principals made a sneaky cameo (which the protagonist Takaharu, noted to be exceptional, noticed while Bungou did not) last week.  It’s another one which supports my theory that it’s deception that causes the bulk of these mysterious diseases – self-deception especially.  Ramune-sensei calls it “stress” and while that’s no doubt literally true, it’s the deception that’s the root cause of the stress most of the time.  Stress may be the literal cause of the byoui, but is itself a symptom of a deeper existential malady. 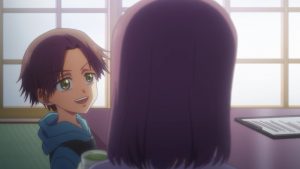 In this case it’s a matter of survivor’s guilt at the heart of the deception, and that’s a dark subject.  This series has shown it’s not afraid to tackle those and do so unsparingly, and so it is here.  The two boys we saw with their mother buying a nikuman last week and Rio and Yuu, younger and older brothers.  They show up at the shrine here, the mother complaining that her ears have turned into gyoza.  Some things she can hear and some she can’t, and that includes voices – and she’s often unable to hear Rio’s voice.  The gyoza intercept certain voices, but not all of them – and it’s only when the mother is able to hear those voices that the gyoza will fall away. 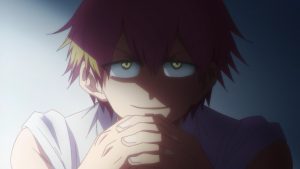 It’s not too difficult to guess what the root of the issue is here, but that’s not really the point.  Sensei does what he often does, tell the patient to consider the issue and try to find the cause – because no matter what he does, confronting rather than avoiding it is the real cure.  But he knows the truth, and he scolds Kuro that he does too and shouldn’t pretend otherwise.  Rio forces the issue though, exhausted with doctors telling his mother there’s nothing directly they can do.  Sensei offers the boy an option – the Pearl of Night Voices, a pair of conch shells with the ability to act as transmitters.  But only if the users are a male and female who love each other (thus the rather blunt question he asks Rio before prescribing them). 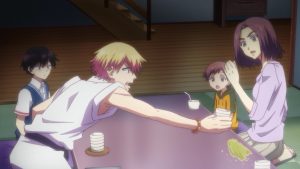 Once more Sensei gets a craving for the weekly delicacy (he tries to punk Kuro with hot sauce in his gyoza but fails utterly), as Rio ponders using the shells.  The cost it high – his own voice – but Rio seems willing to pay it.  The world we see this family inhabiting is pretty chilling – Yuu’s fate is made clear in no uncertain terms, and the family itself is hounded by the press and given no peace.  What happened was neither one’s fault, but both Rio and his mother blame themselves – Rio for saying stuff that children say all the time, and Mom for attending to a crying child at the expense of a quiet one.  And neither one has really accepted the truth, though Rio’s self-deception hasn’t manifested itself so disturbingly as his mother’s. 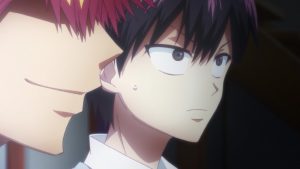 As ever, there’s a lot of subtle stuff going on here that doesn’t immediately demand your attention but is clearly significant.  For the first time we get a mention of Kuro having a home other than with Sensei (perhaps he is living as a traditional apprentice at the shrine), though whether the business he has there is critical or a pretext for what happens to Sensei isn’t yet clear.  Kuro’s absence (he later seems to sense danger, which again implies he’s spiritually gifted) leaves Sensei to accompany Rio, whose mother’s ears have taken a turn for the worse, and he shows a sense of responsibility here that seems a bit out of character (though not really).  Given the true nature of this byoui, one senses that the resolution to this case is going to be messier and more painful than what’s come before.