If there’s one show this season people are sleeping on, it’s Kai Byoui Ramune.  I know I have a vested interest since it was my sleeper pick in the preview, but I’ve thrown those under the bus many times when they didn’t cut it.  Dr. Ramune is not one of them.  It’s got a lot going on, in that nesting doll sort of way – it seems pretty straightforward, but the longer you watch the more it reveals.  There’s a lot of good stuff happening with this series, if you’re paying attention. 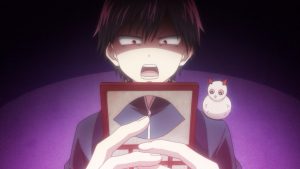 One of those good things is that the series is quite striking visually, in an agreeably old-school way.  While Platinum Vision is a relatively unknown studio there’s clearly a respectable budget here, and it shows.  While I assumed Ramune was about as niche as it gets, it may not be quite so anonymous here in Japan.  That budget is a clue, and it’s getting a tie-in cafe (chikuwa penis plate?) in Harajuku, something you don’t see too often with really obscure titles.  Maybe this series is more popular than I thought. 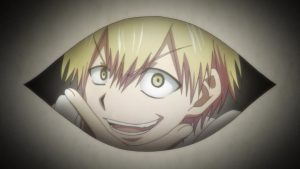 I’m enjoying the expanding universe of the show, where the core elements – the supporting cast, and the relationship between Ramune and Kuro – are layered in with the weekly storyline.  We briefly met Ayane (Ueda Kana) at the end of last week’s episode, when it was clear she was more than she seemed.  Turns out she’s 112 (she retains memories of her past life), and runs a magical item shop posing as an antique shop with her great-grandson Nico (Okamoto Nobuhiko).  Naturally this is a favorite haunt of Ramune-sensei, though Kuro has never visited before now (clue?).  Nico doesn’t score any points with Kuro by mistaking him for a grade-schooler, but there’s a reason for that… 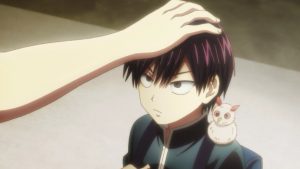 The MacGuffin in this episode is a cattail flower, a magical item which gives the wearer the power of invisibility.  The cost (yes, there’s a trend here, which invites questions about Ramune himself) is that using it gradually erases your presence whether you want it to or not.  That’s what’s happening to the burglar (Ono Daisuke) who shows up to sell a bunch of stolen antiques.  Obaa-san tries to buy the cattail off him, knowing its power, but the man refuses (fervently).  Dr. Ramune, being the softie that he is, is unwilling to leave the fellow to his sad fate even if he is a crook.

Eventually – thanks to Kuro’s calm deduction – he and Ramune-sensei find the man and confront him, and it’s clear he’s been consumed by the spirit of the item.  He still refuses to surrender the cattail, but Ayane shows up with Nico and challenges the spirit to a bet – the presences of all four humans against the item, and that of the man whose body wears it.  Those stakes seem uneven, as the calmly logical Kuro points out, but Granny is someone who never takes a bet she can’t win.  And luring the enemy into thinking the stakes favor them is all part of her strategy.  I guess you don’t live to be 112 without learning a few things. 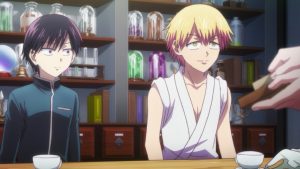 The hide-and-seek challenge in the park is quite interesting to watch play out.  Again, Ayane allows the spirit to think the odds are stacked in his favor, but she’s orchestrating everything like Ozawa Seiji.  Kuro goes first, and applying his usual rock-solid deduction surrenders his turn by narrowing the search area.  Ramune goes next and is pretty much a flailing mess of useless (I wonder if his poor stamina is foreshadowing).  Ayane is third and would have seemed the team’s best shot – the spirit certainly thinks so – but this is all part of her plan too.  She intentionally fails at a “master” strategy to get the host’s heart pumping with excitement, leaving the kill for Nico – who, as it turns out, is blind and possessed of super-sensitive non-visual senses. 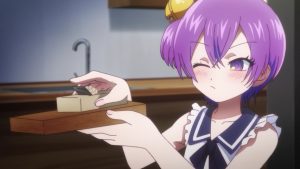 All of these item of the week stories have been solidly entertaining, but it’s the underlying stuff that’s really getting my attention with Kai Byoui Ramune.  As I noted last week this series seems to be a sort of modern “Folktales From Japan” for grown-ups, and I suspect the lives of the leads are going to be colored by the moral themes they explore.  As Ayane notes Kuro has “a lot of potential” and I sense he’s going to be a key driver for this side of the story.  He seemingly lives with Ramune-sensei, which invites all sorts of questions, and I won’t be surprised if he has serious latent spiritual power.  I’m keen to see how all this plays out in coming weeks.