In almost no sense is the Toilet-Bound Hanako-kun experience a mixed bag for me.  I love this series in manga form, and I love what Lerche and director Andou Masaomi’s team are doing with it.  But there is a measure of frustration in seeing some of the viewer reactions to the series.  I’m used to shows I love not being popular – that’s almost a given at this point.  But some of the complaints just make me want to pull my hair out – stuff like “There’s not enough animation!” or “Hanako is creepy!”.  There are real head-desk moments for me, but while I sometimes find myself taking up the latter role, I try to be a critic rather than an evangelist. 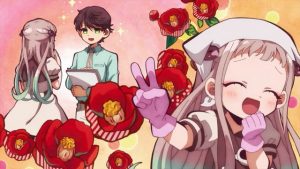 With that said, I do have to note that as far as the animation style and Hanako, I think that’s rather the point.  Maybe people are just so used to anime striving for the safe middle ground, both in terms of visual style and voice acting, that anything which intentionally flouts it is met with suspicion.  I think all one has to do is read a few chapters of Aida Iro’s manga to understand why Andou is going this route.  Her look is unique – a gothic storybook style which never remotely strives towards realism, but a sort of hybrid between reality and dreams.  The series is animated the way it is by choice, because it’s the best way to convey the same vibe as Aida’s drawings. 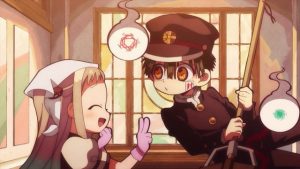 As for Hanako, this is simply who he is.  The first episode is very much a soft entry into Jibaku Shounen Hanako-kun, and while the real story begins to unspool this week it’s still a series which is very deliberate in revealing its many layers.  The appeal of Hanako-kun, for me, is that he retains a recognizable and sympathetic twinge of humanity but is clearly in no way, shape or form human.  He’s alien – a creature of mystery and legend, and he doesn’t play by the same rules humans do.  The fact that he’s able to foster relationships with humans like Nene (and not only her) is one of the most interesting elements of his character. 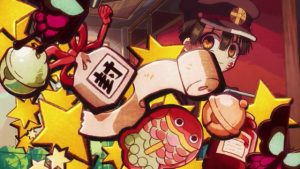 As to Nene, fostering relationships of a certain kind is something she’s obsessed with – but not especially good at.  Her latest crush, Fuji-kun, is merely using her to get out of after-school chores.  Hanako-kun is bemused – he’s keeping Nene very busy himself (if you lived in a bathroom, I imagine you’d be obsessive about keeping it clean too).  But fate intervenes and gives Nene a more interesting assignment.  The school is abuzz about a spirit called Yousei-san, known for stealing items and hiding them.  And, the story goes, if you see it, your life will be forfeit. 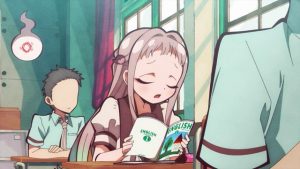 And so for the first time we learn one of the major ground rules of Jibaku Shounen Hanako-kun – youkai take on whatever form the rumors about them describe.  For Yousei-san than means it’s taking on the frightening form being discussed in the halls – but in fact, it’s actually a group of small youkai called mokke who’ve been living harmlessly alongside humans for centuries.  Hanako seems to take his responsibility as first among the the Seven School Mysteries seriously, which means he can’t ignore threatening youkai terrorizing his school.  But he’s also compassionate towards the mokke, who of course he’s unable to assist himself. 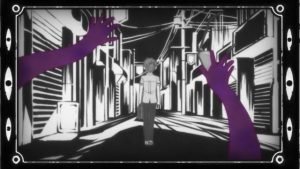 Hanako-kun may not be human now but he was once, and just how much of that he retains in his essential nature is impossible to say.  As to what sort of human he was, we get our first glimpse of that thanks to Minamoto Kou (Shouya Chiba).  He’s a third-year in the middle school division, and it was his older brother Teru who me met last week through Nene’s wish.  In Hanako-kun mythology the Minamoto Clan are powerful exorcists, and young Kou declares that he’s the scion ready to bear that mantle, starting with Hanako.  It doesn’t work out that way, but Hanako does find the encounter rather invigorating in more ways than one. 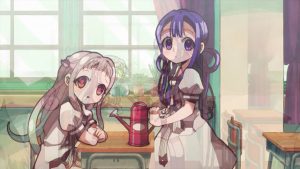 Hanako very frankly admits, in earshot of Nene, that he killed someone in life – and that his current “job” is the penance he must observe before God forgives his transgressions.  As to Kou Hanako is wryly tolerant, even encouraging in a way – to a point.  But the key moment here is Nene’s response to what she’s learned about him.  That is, seeming indifference.  “You’ll even make friends with murderers”, Hanako muses, and while he’s seemingly light-hearted about the matter it’s hard not to wonder if he was genuinely worried he’d lose both his janitor and the person who actually called him a friend. 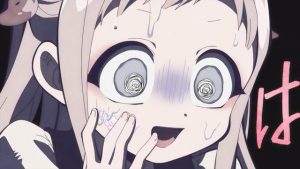 If I may slide into evangelist role briefly, I’ll reiterate here what I said last week – Jibaku Shounen Hanako-kun is not a series whose finished product you can predict after a few episodes.  Everything was definitely dialed up from the premiere this week in totally successful fashion, but we’ve barely scratched the uppermost extremity of the surface – this series is layers upon layers upon layers.  We’ll never get to all of them if the series ends up only running for 12 episodes, but that’s enough to paint a much clearer picture than the few brush strokes already applied.  It’s a great show already in my opinion, but it’s genuinely just getting started.