Isuzu Mu – X has appeared for a long time in Vietnam market. However, with the design is different from the tastes of the Vietnamese, there is no expected sales of the Japanese car company. But in mid-September 2018, the new version of Isuzu Mu – X was launched with a new, modern and eye-catching design and at an extremely attractive price in the situation of rare 7-seat cars but also increased prices. .

A few days before the launch of this Isuzu Mu – X model, I myself heard a neighbor came down with this SUV, I found it strange and asked him “why not choose another car and choose this model?”. The neighbor told me “the best new car in that segment, unbelievably beautiful” and showed me pictures. But I think he “lost” the image in the media about the car. And then myself was wrong when a few days later I was assigned to attend the test drive of this new model car.

Appearing quite early at the test drive, I saw almost enough versions from the new generation 1.9 turbo and 3.0 were available. Of course, with large SUVs or pickups, I always choose version 3.0 without Turbo for it’s purely powerful.

With my carefulness, whether it’s borrowed cars or private cars, especially new models, I always take a walk around the car to check if there is anything strange or unusual. With the new Mu – X, it takes quite a long time to observe the pair of Bi-LED Projector headlights. I have to say the new headlights on the car are very beautiful, impressive, not too colorful, not ostentatious but still have something very attractive that is far different from what the neighbor’s picture shows. 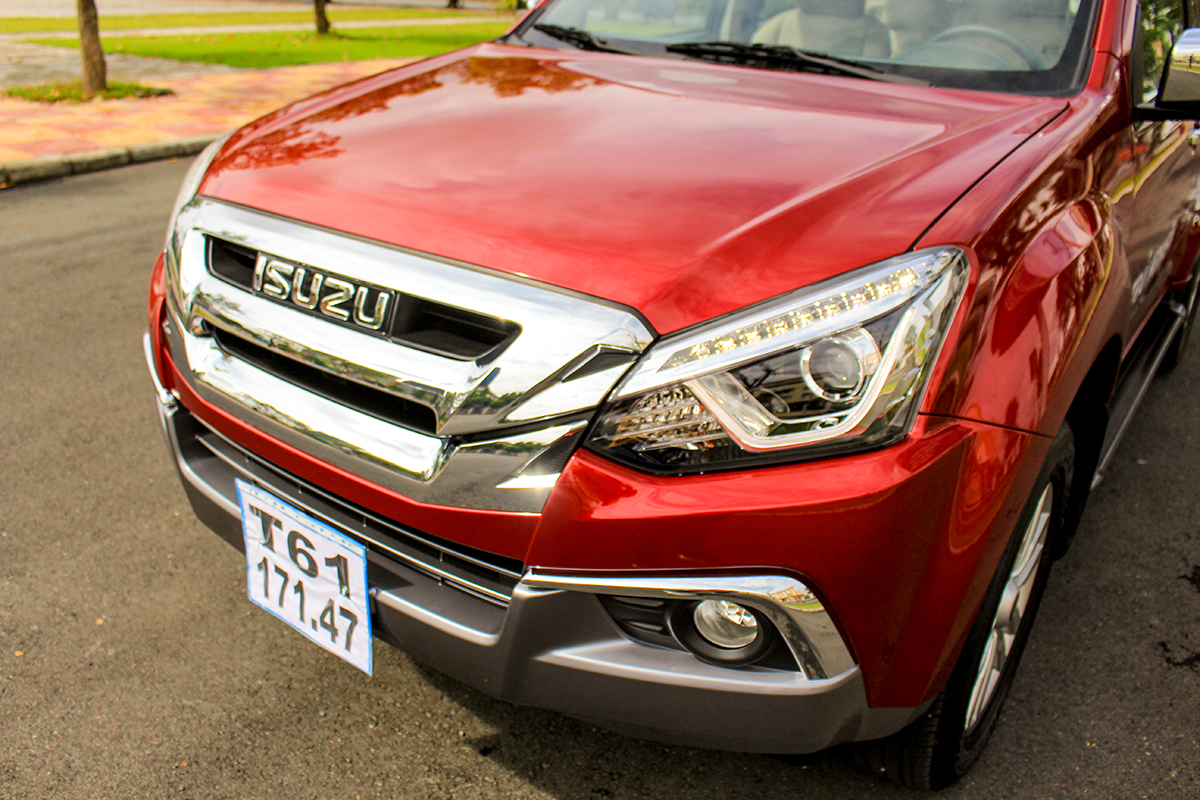 But perhaps Isuzu slightly abused chrome details when putting too much on the car’s bumpers to make the car overall soft, although the capo and the lower bumper are polished with sturdy ribs. 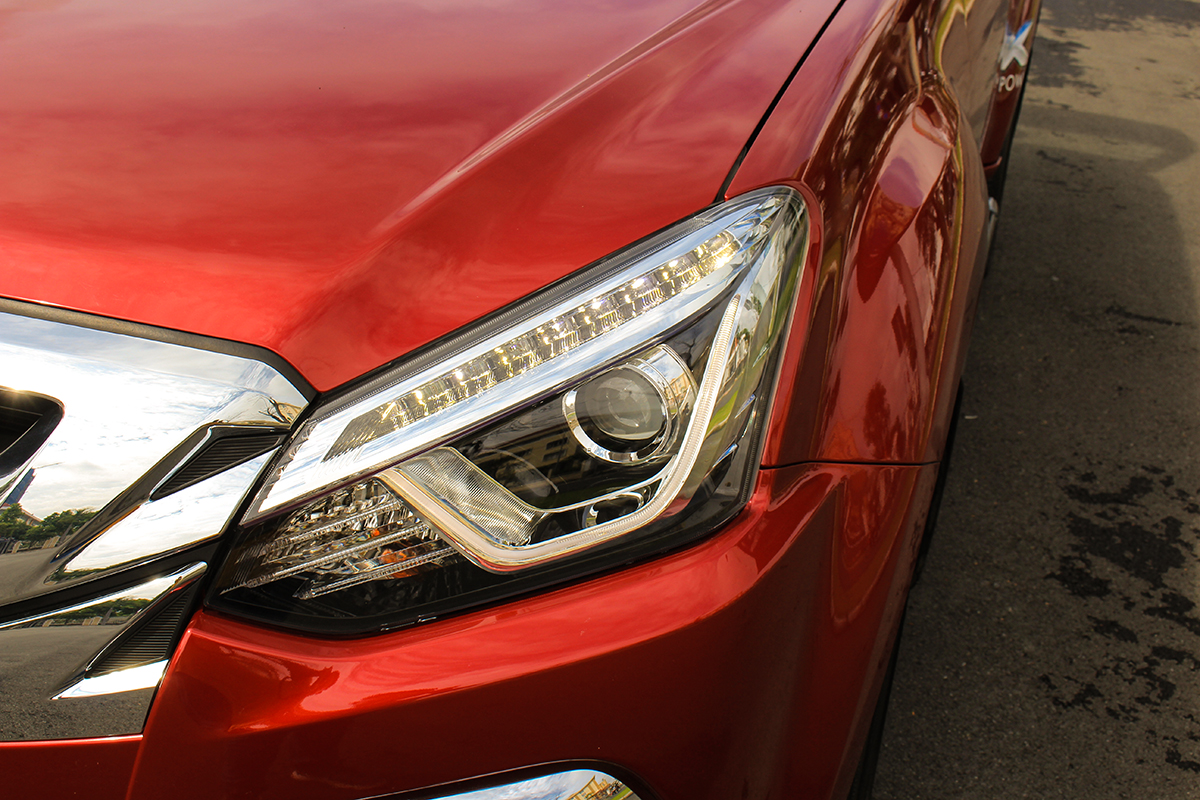 The side of the car is not much different from the old version. Still big chrome rear-view mirrors, the C cylinder hasn’t changed as much as it used to. The only pair of wheels that change from dual to multi-dual makes the visual feel more novel. Enclosed footstep helps drivers as well as passengers easier to get on. According to the manufacturer, the ground clearance of the Isuzu Mu – X is up to 230mm, an impressive figure that can be said to be the highest in the segment to help the driver safely climb the mountain pass without worrying about roar. 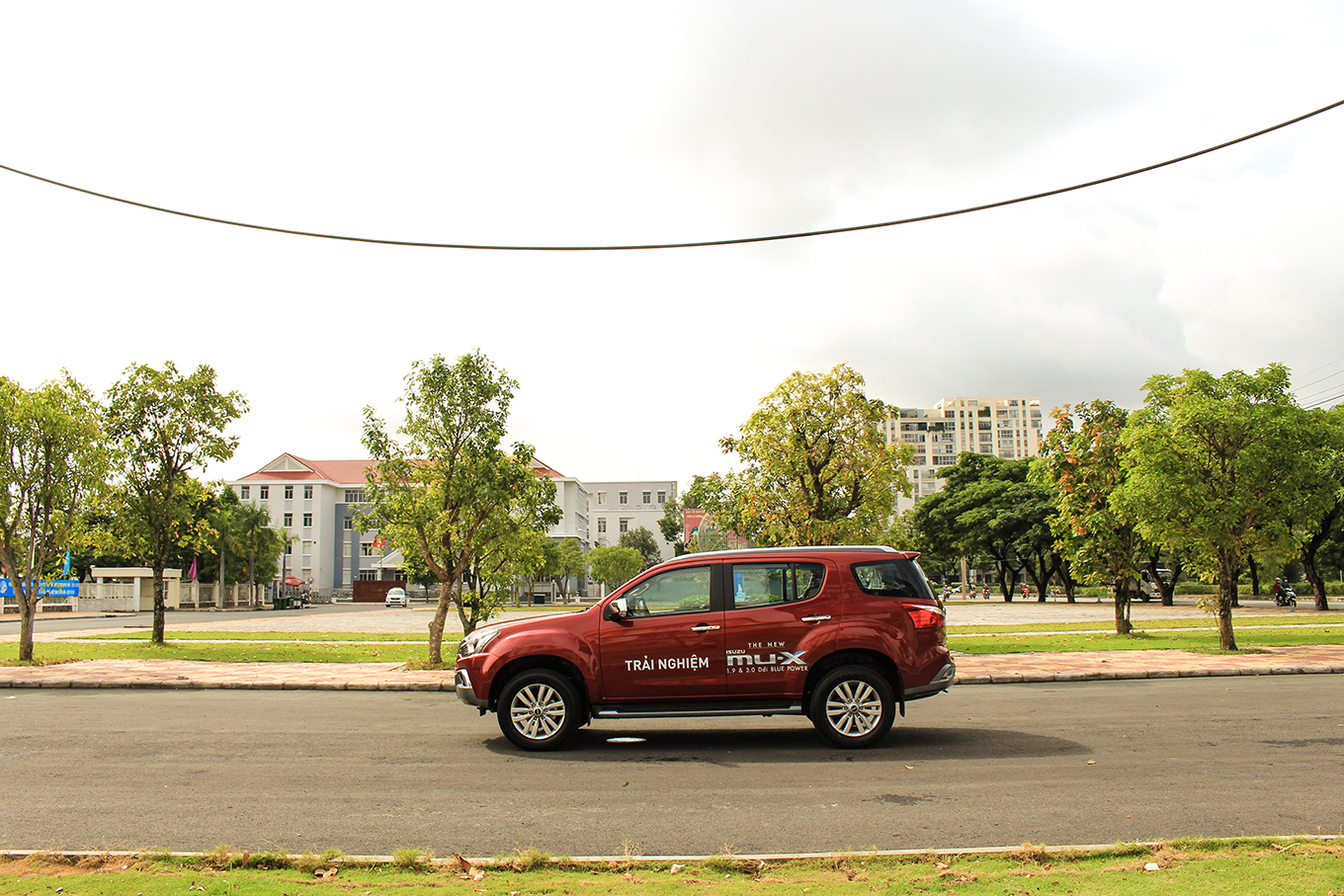 The rear of the Mu – X is designed to be simple and square and also has a large chrome bar that creates a horizontal accent and the rear taillights seem to be bigger than the previous one and the turn signal cluster combined with the reversing lamp. shaped quite sharply like a bird’s wings or hawkish eyes depending on the viewer that his own feelings. The test drive version of the article is a high-end version 3.0, so there will be more plastic panels underneath that increase the sportiness as well as the stiffness through the visual perspective. 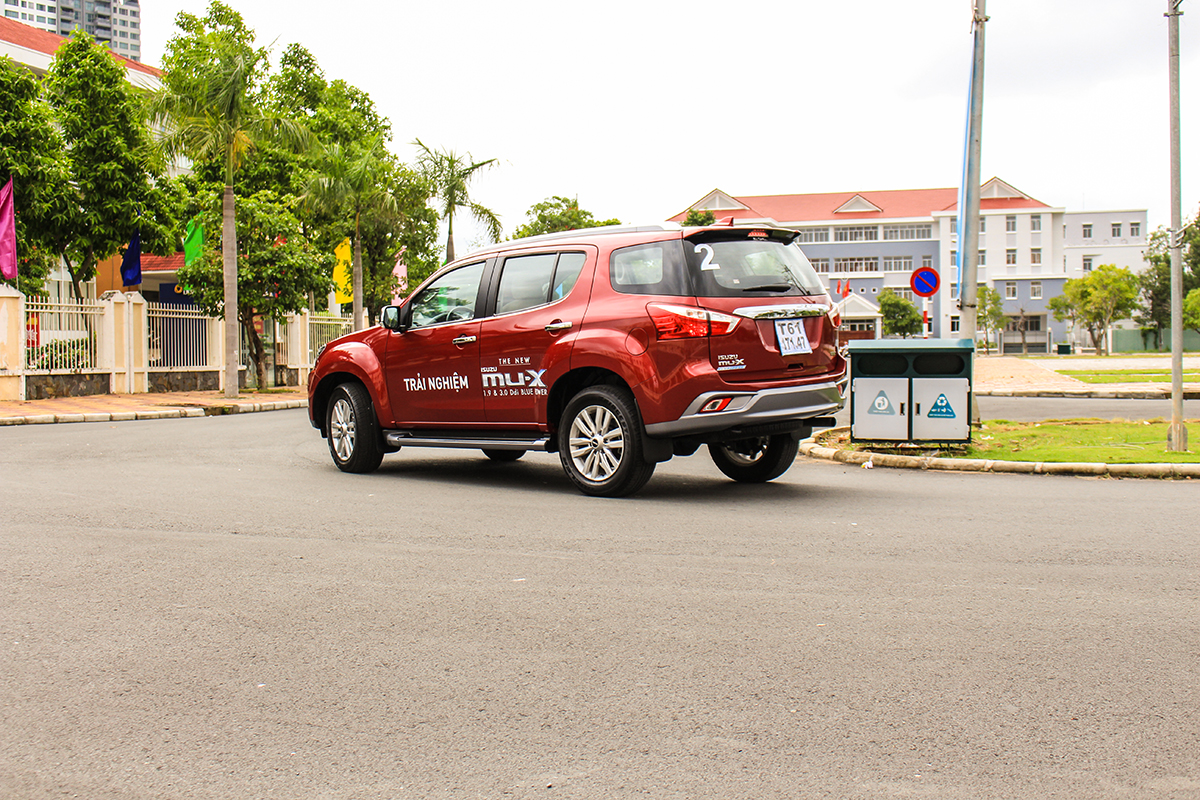 When entering the car, the first feeling is that it is more airy and luxurious, thanks to the light-colored leather seats with light-colored panels that combine harmoniously for a modern feel. And I also find it a bit strange that the Mu – X is a reasonably priced car but still has wood grain panels as a highlight for the vehicle space. 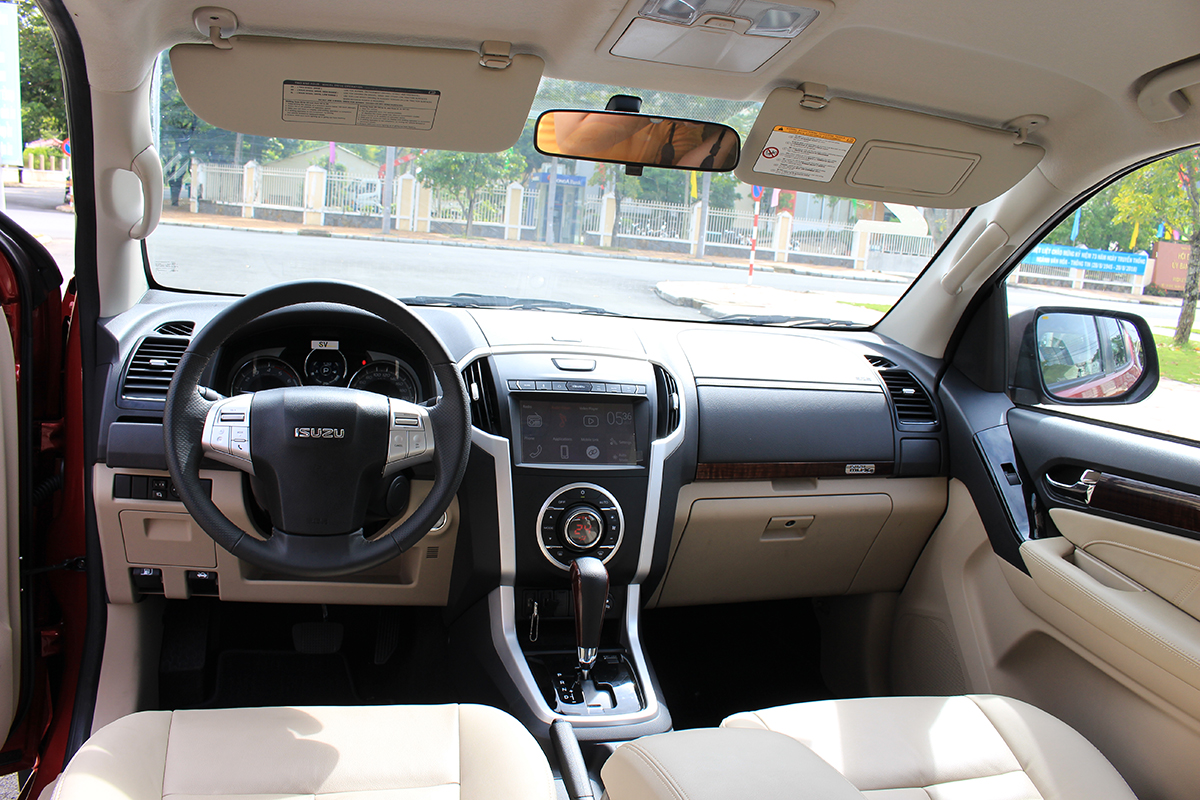 As you can see, the Isuzu Mu – X listens more to users, using more glossy plastic than the old one, which makes it more luxurious. If not mistakenly remembered in the old version, Mu – X uses the entertainment screen as a module to make it feel like a “ship” that looks very crude, this can be said to be a fatal weakness when Vietnamese people attach great importance to form. Fortunately, in the new release, the entertainment screen has been changed to make the entertainment space between cars “better”, more seamless and Apple Carplay. Left clusters adjusting knob air conditioning fan is no different than the old version but seems to be “retouched” to feel more shiny. 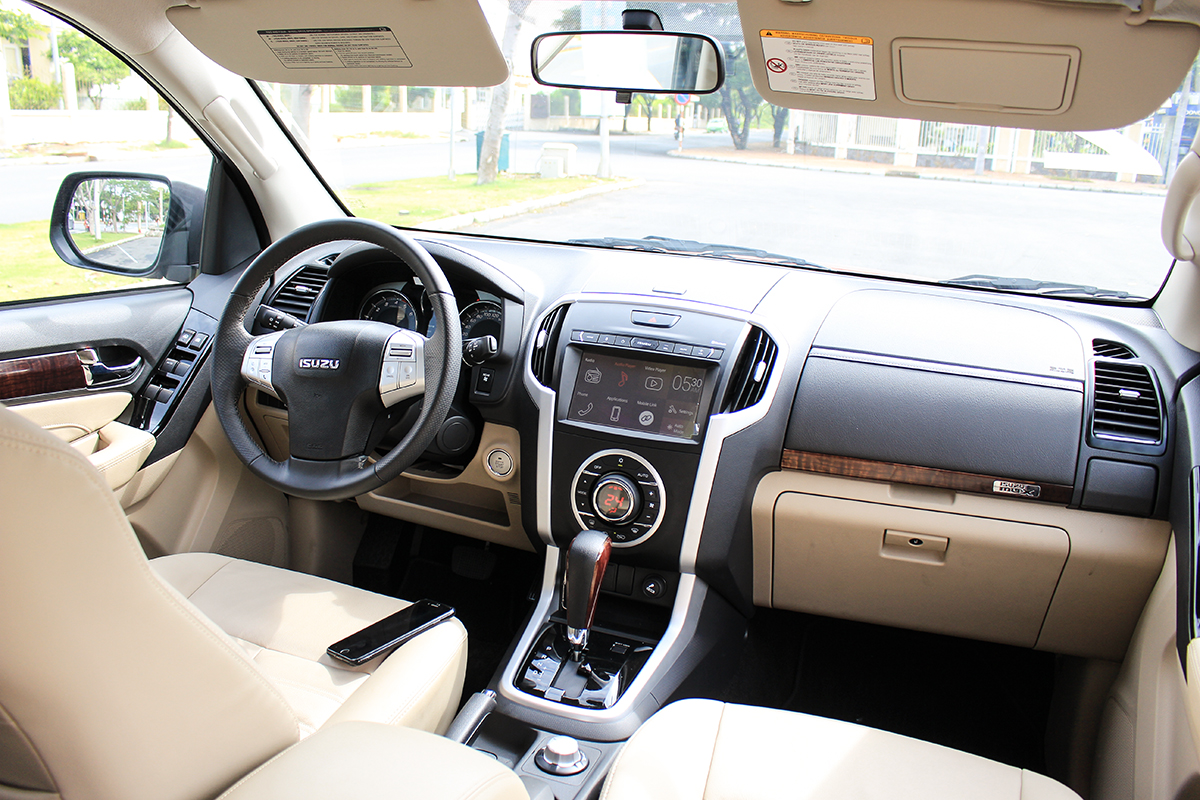 The clock cluster is still old design, but the company has hard chrome plating strange points for the cluster. Comes with a small TFT screen that displays the operating information with nice graphics and good visibility. However, compliment is praised, but myself and probably many others also want Mu – X to redesign the steering wheel because the car now looks very rough with “truck quality” rather than family cars. 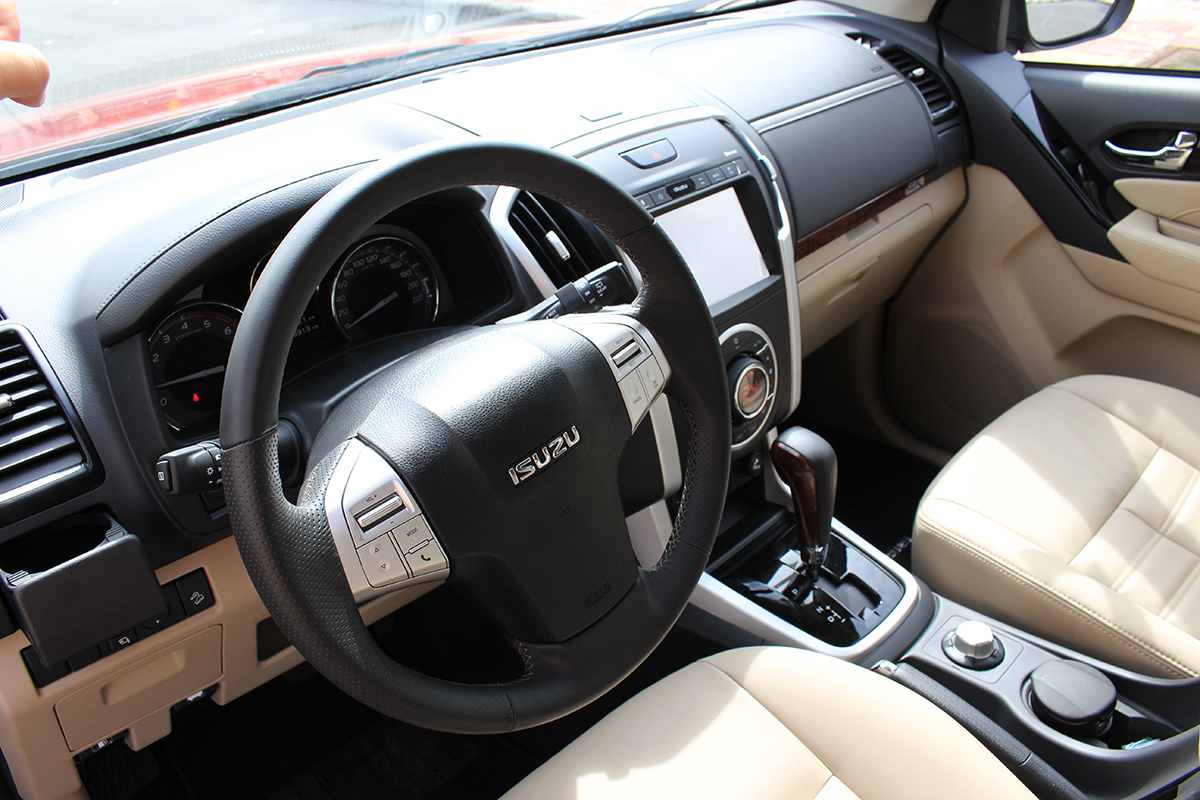 The seats on Mu – X use light skin color, the use of light materials gives the feeling of a wider, more luxurious car, but if not carefully cared for, the skin will be discolored and lose the elegance of the car. The car still uses the electric adjustable driver’s seat, the high adjustment seat, so the view is very wide and comfortable. 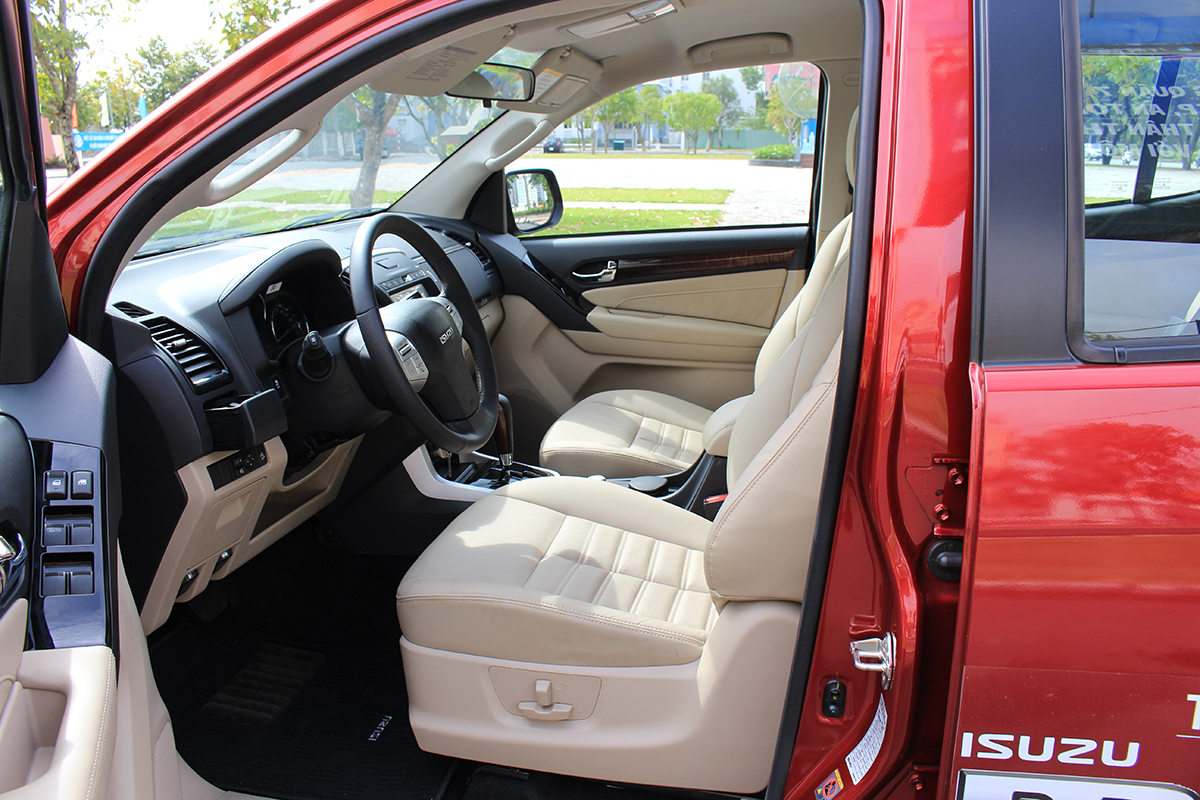 Wide rear seat space is something that need not be said on SUV models. And on Mu – X, the company has created a highlight with wooden cladding panels at the door. 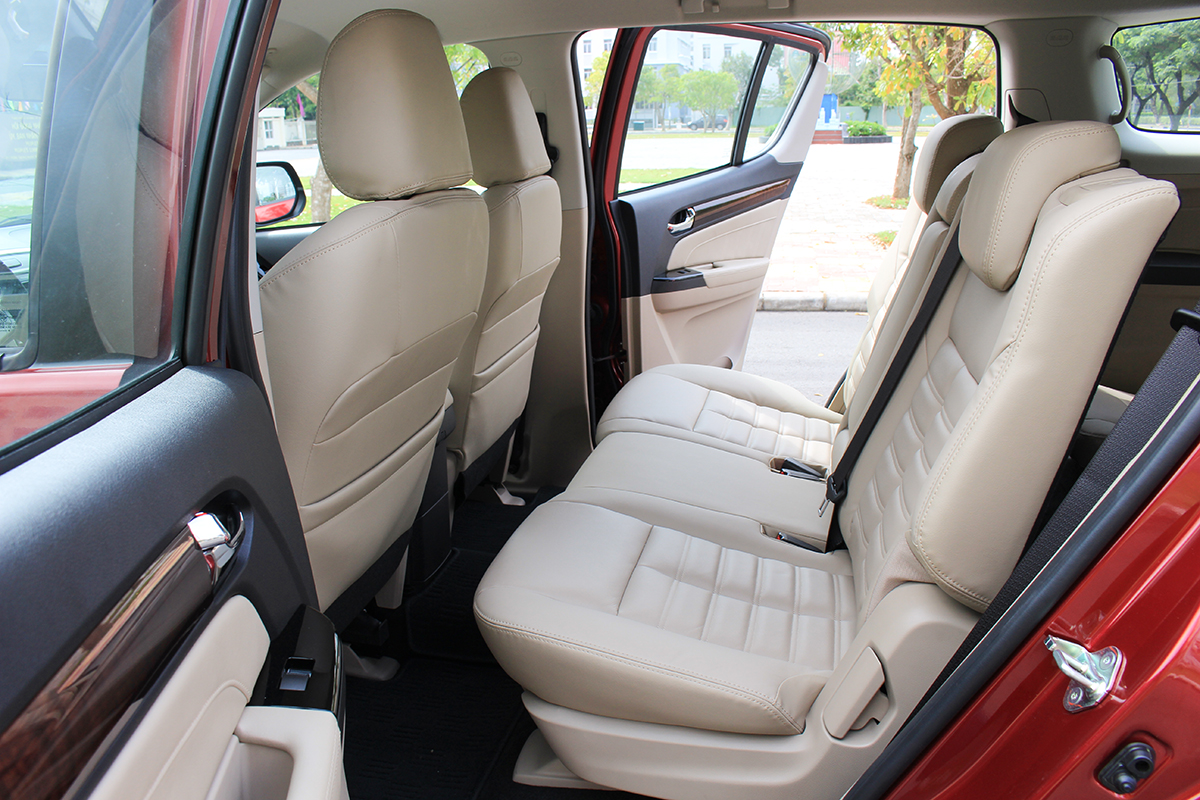 However, in row 2, it is impossible to slide up and down, only to change the fall of the seat. This is a big minus, because it can’t increase the space for the third row and probably only for small people. Sorry, but in most segments of the car have been changed the position of row 2. 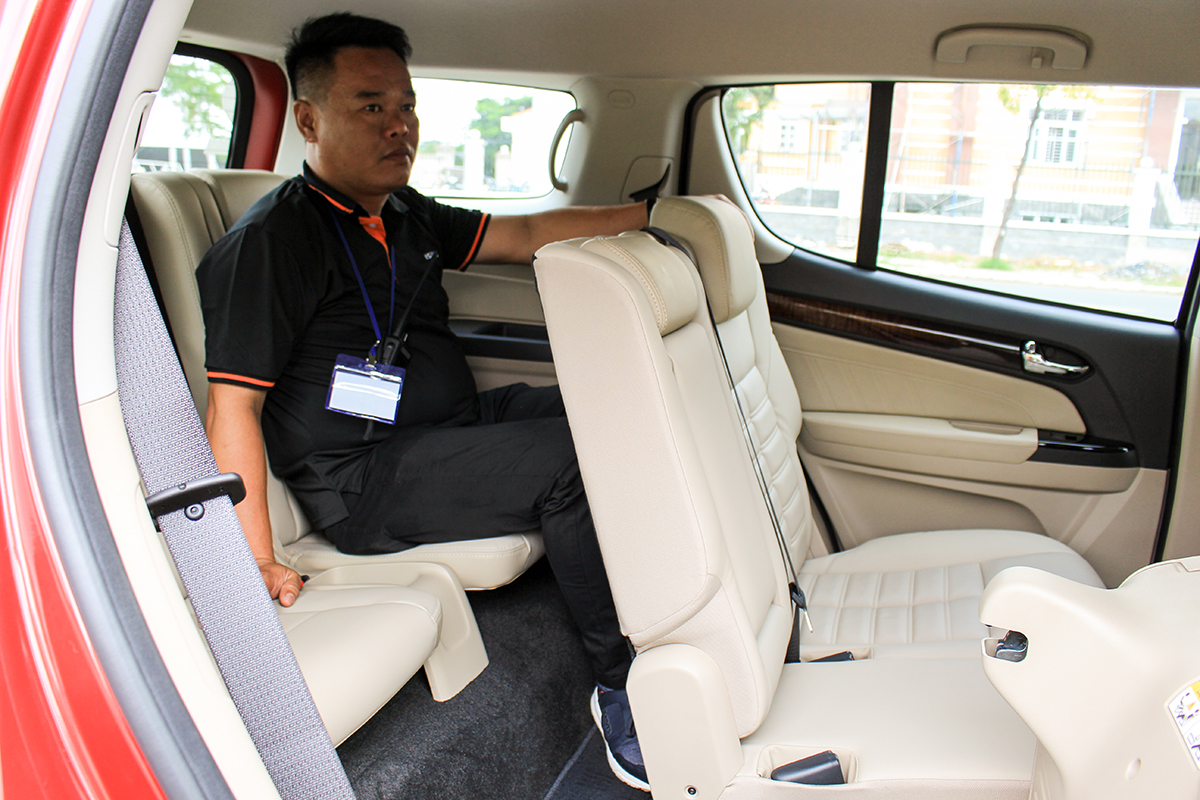 The rear storage space when setting up 3 rows of seats, I think is sufficient. Like other SUVs or Crossovers, if you want to increase the space, just lower the third row, even second row if needed. But on this Mu – X, we can not create a plane when lowering the seats, although it does not affect much, but it will be a bit uncomfortable to look at. 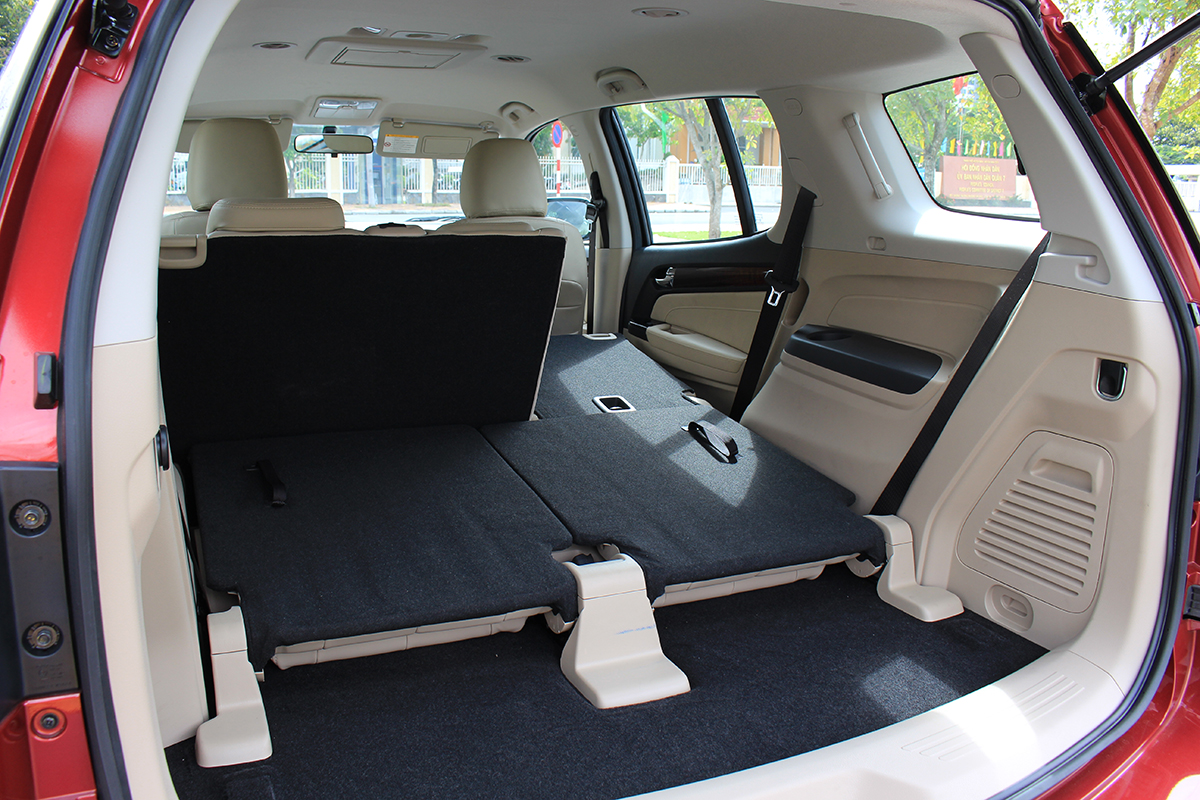 Because this is a test car, the writer himself did not have time to experience much. In general, the 3.0L engine on the Mu – X is not too strong, if you love the speed phase, Mu – X is not an option. As announced by NSX, Mu – X uses a new DDI BLUE POWER engine with a capacity of 175 HP and traction of up to 380 Nm, I think Mu – X has no trouble operating. 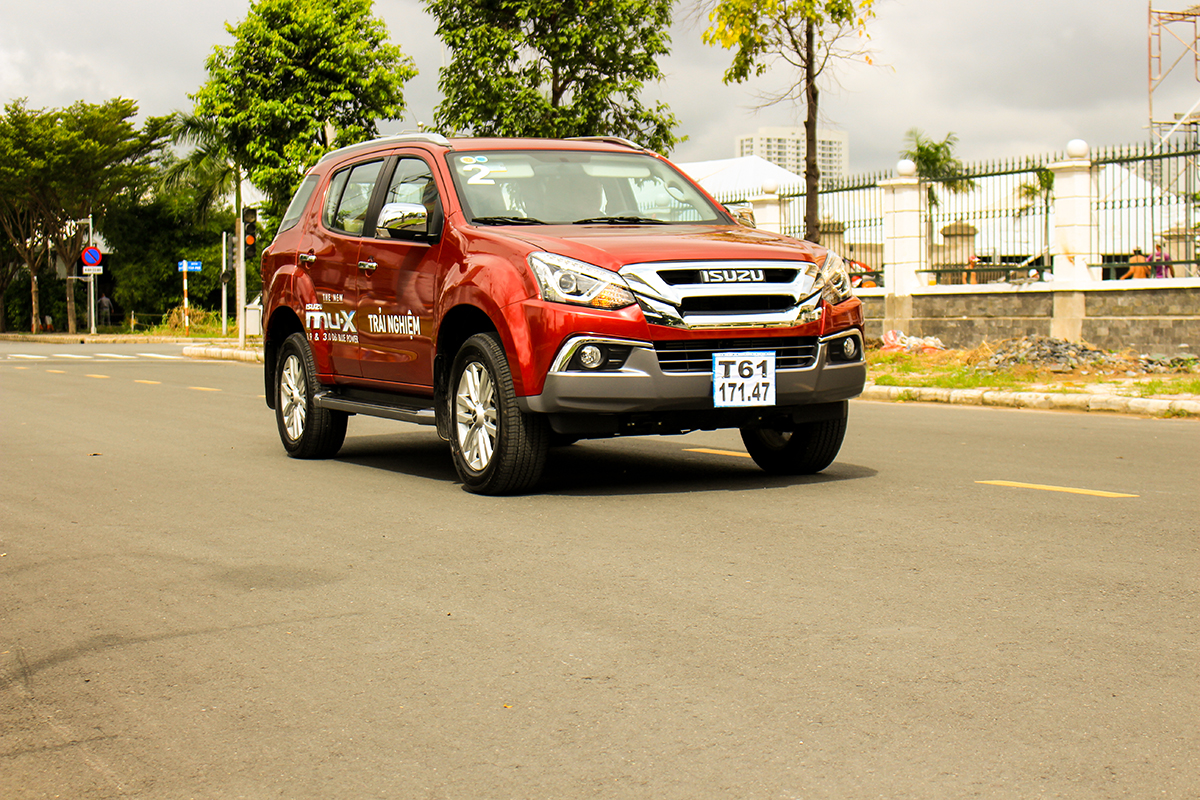 Due to the characteristic of the oil machine, it is impossible to avoid the noise from the engine. For those who love cars, the sound of this machine is nothing even a matter of excitement when accelerating. However, for those who are difficult, sometimes this is a big minus point. In terms of safety, the Mu – X is equipped with the necessary brakes such as ABS, EBD, BA, BOS intelligent braking system, electronic balance and support up and down the slope. 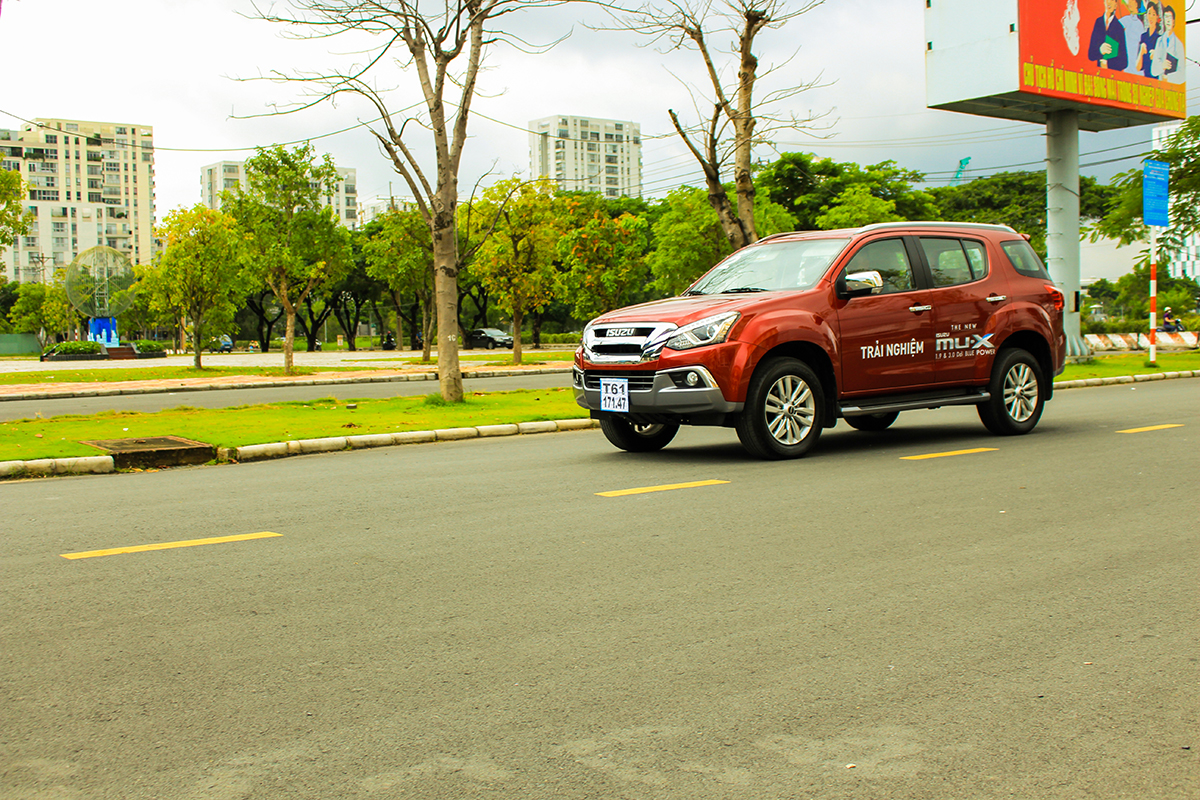 If you are passionate enough, with the desire to save money and high trade, Isuzu Mu – X is a good choice. 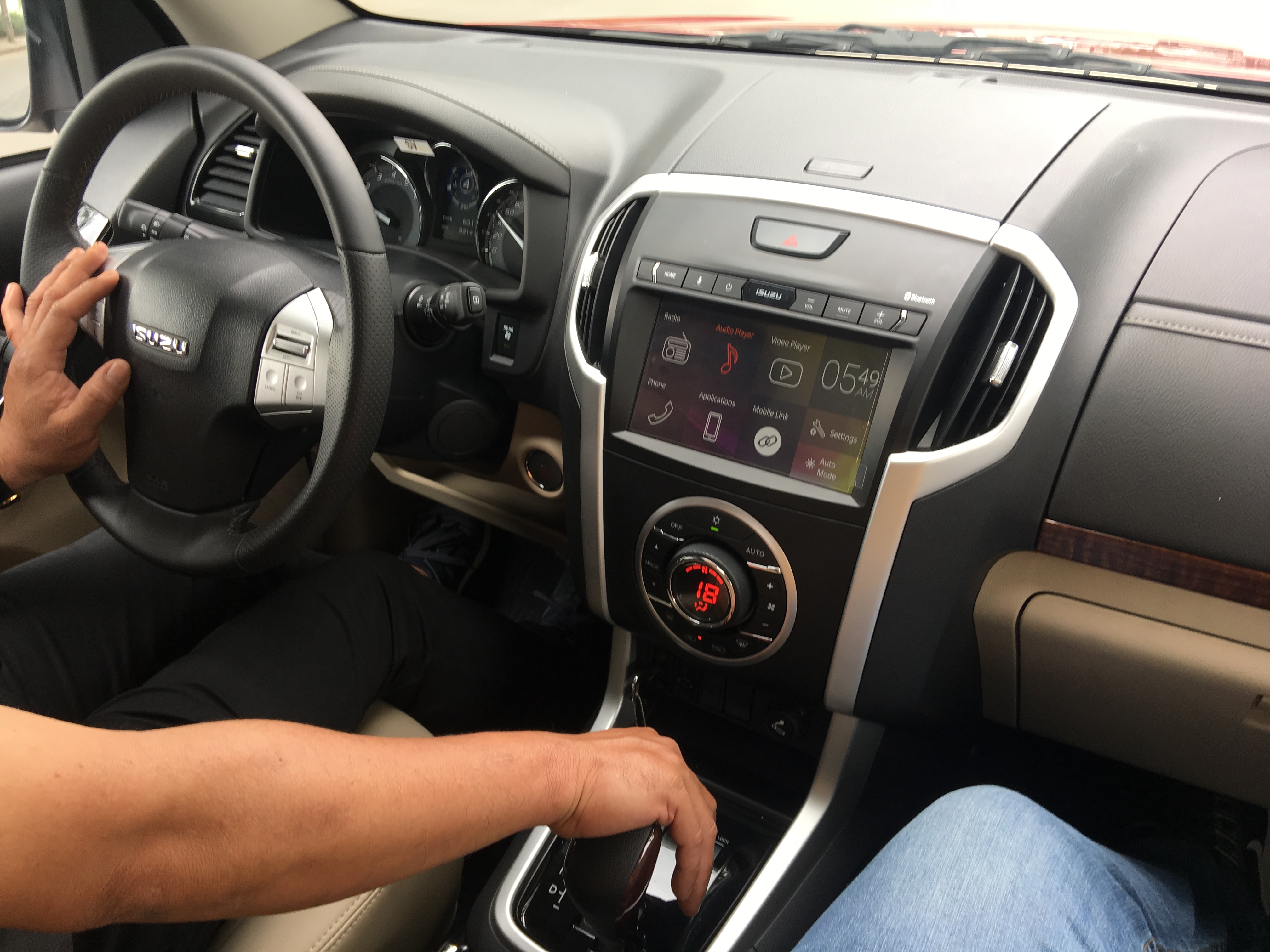