Is it cool to return home to buy a property?Over 60% of wanderers choose to buy a house nearby


“Beijing, Guangzhou and Shenzhen, stay or leave?” This is a question that many people will struggle with in the first year.“It doesn’t open for a year, and it eats for one year after opening.” This is ridiculed as the wave of returning home during the Spring Festival season in some cities.

However, the epidemic has returned this winter, and the curtain of the Spring Festival Transport in 2021 has not yet begun. Over 29 provinces, autonomous regions, and municipalities across the country have advocated “Chinese New Year in situ”. Returning home is “difficult.” Can the proposition of returning home to buy a home hold true?

58.com and Anjuke released the “2020-2021 “Returning Homeownership” Survey Report-No Returning Hometown during the Spring Festival · Online Cloud Real Estate” survey report,A multi-dimensional in-depth interpretation of the changing trend of the home-home purchase market.In terms of home purchase options, over six adults chose to stay in their working cities and surrounding areas to buy houses, and nearly four adults chose to return home to buy homes because of the convenience of taking care of their families.

The most popular cities for foreigners working in Beijing to return home to buy property are Baoding, followed by Langfang, Handan, and Shijiazhuang;

The top three cities with the intention of returning home to buy property in Shanghai are Yancheng, Suzhou and Hefei;

Zhanjiang, Maoming, Shantou, Jieyang, and Meizhou are among the TOP10 cities with the intention of returning home to buy property in Guangzhou and Shenzhen.

58. The survey data of the “2021 Homecoming Property Report” by 58.com and Anjuke shows that career development and family life are still the decisive factors for people to choose where to buy a house. People who choose to stay in a working city are more concerned about the convenient living environment in major cities, more promising home ownership development, and better education for their children. Compared with last year, people who choose to stay in working cities to buy property value the convenience of life in major cities, accounting for nearly 20% higher than last year.

“Earning money in big cities and buying houses in small cities” has become a strategy for some young people to buy houses on a curve.Although the first-tier cities provide people with career development space and higher convenience in life, the high housing prices and the high threshold for settlement also make many people unquestionably put their eyes on the third- and fourth-tier cities in their hometowns. 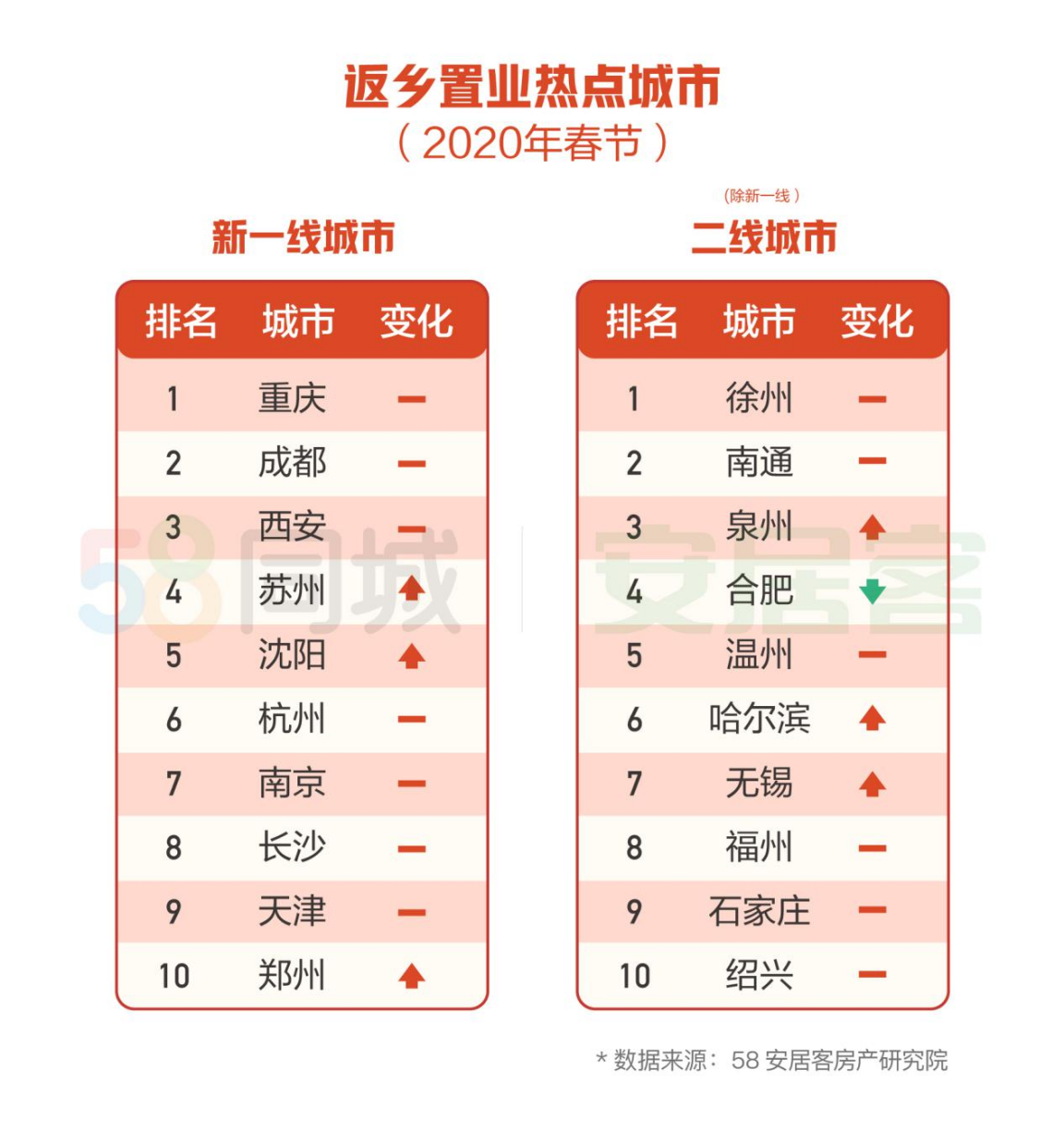 Lower housing prices and comfortable living environments have made second and third-tier cities a retreat for more and more “drifters”. However, for them, returning to their hometowns is also facing problems such as reduced salary, reduced quality of life, and reduced medical and educational resources. Among them, the reduction of hometown job opportunities is the primary reason hindering people from going home, and the proportion has increased by 5% from last year.

In addition to first- and second-tier cities, the attractiveness of new first-tier cities is further increasing, becoming a new choice for people returning home to buy property.

58.com and Anjuke’s “2021 Homecoming Property Report” shows that among the new first-tier 15 cities, western cities are the hottest home buyers, and Xi’an still leads the search for new houses, followed by Chongqing and Wuhan. In terms of search for second-hand houses, Chongqing , Chengdu and Shenyang are in the top three.

As high-quality resources of population flow gather in central cities and urban agglomerations, the new front line has become more attractive to non-residential buyers due to its strong employment absorption capacity and high-quality public services.

Zhang Bo, Dean of 58 Anju Guest House Property Research Institute, said that the Spring Festival in 2021 is very special, and it is also a very special year for returning home to buy a home. Due to the impact of the epidemic, it is expected that many cities will have certain restrictions on returning home. There is also a certain degree of uncertainty that can receive users on-site inspections normally.