IPO prospects | Didi Chuxing has completed the IPO price, is there any sincerity of 70 billion US dollars?

On June 11, 2021, Didi Chuxing (abbreviated as Didi) submitted a prospectus (stock code “DIDI”) to the U.S. Securities Regulatory Commission (SEC), marking that the domestic giant of shared travel has officially embarked on the second step. The way to go public on the secondary market.

As a familiar new economy company, the market is full of expectations for Didi’s listing. According to the latest market forecast, Didi’s current IPO is priced at around US$70 billion, which will become the largest IPO event so far this year.

So, from the perspective of the capital market, as the absolute hegemon in the shared travel field, is the $70 billion valuation price reasonable for Didi?

Compared with Uber, there is still room for improvement in core business

Didi and Uber are the two most well-known shared travel platforms in the world, and the relationship between the two is intricate. Taking into account the homogeneity in business structure, market size, and popularity, Uber is the best benchmark for Didi, which is about to go public.

As of Q1 of 2021, Didi’s business covers 15 countries and regions and has 493 million annual active users worldwide. In 2020, GTV will be 214.6 billion yuan, and its core order volume will reach 9.1 billion. For comparison, its competitors Uber has covered 63 countries and regions by the end of 2020, with 90 million annual active users, 370 billion yuan in GTV, and 5 billion core orders.

It can be seen that, compared with Uber, although Didi’s annual active users and new orders are relatively high, there is a significant gap between Didi and Uber in terms of the breadth of global coverage and the scale of GTV. The reasons may be behind this. The reason lies in the low price per customer in the Chinese market.

From a specific business perspective, according to the information disclosed in the prospectus, Didi divides its existing business into three main lines, namely China travel business, international business and other businesses. And Uber’s main business is divided into three parts: travel, delivery, and other three parts.

Regarding the revenue recognition principle of China’s travel business, Didi has two methods for online car-hailing and other businesses. They are Gross Basis for online car-hailing (deducting passenger subsidies, and driver income and subsidies are measured at cost) and for other businesses. The Net Basis of the business (deduct the driver’s income and subsidies, and the passenger subsidy is measured at the expense), while Uber’s revenue recognition method is unified as Net Basis.

From the perspective of profitability, after 2019, Didi China’s travel business segment began to gradually become profitable. As the impact of the epidemic subsides, the scale of Q1 earnings in 2021 will significantly expand. The adjusted EBITA profit margins for 2018-2021Q1 are -0.21% and 2.6, respectively. %, 3.0% and 9.2%, the profitability has been steadily improved; while Uber’s EBITDA growth rate of the ride-hailing business has slowed due to the impact of the epidemic, and the profit margins from 2018 to 2020 are 17%, 19%, and 19%, respectively .

In a comprehensive comparison, in the core business sector, Didi’s current annual active users and order volume have obvious advantages, and the rate of increase in profit margins is also much faster than that of Uber; but in terms of GTV scale, monetization rate and profit margins In absolute terms, Didi is still far from Uber.

In the future, as funds become more abundant after the listing, Didi is expected to increase subsidies to allow drivers and passengers to consolidate its market share in high-tier cities; at the same time, with the fine-grained efforts to sub-brands such as Huaxiaozhu and Qingcai Carpool The coverage of price-sensitive users in the sinking market is also increasing. Benefiting from the rapid growth of these high-margin brands, the profitability of Didi’s core business is expected to continue to improve, and the gap with Uber will continue to narrow.

According to the information disclosed in the prospectus, Didi’s overseas business mainly covers two parts: international travel and food delivery. In order to differentiate itself from Uber, Didi has identified its main markets in developing countries with high population densities such as Brazil, Mexico, India, and South Africa.

From 2018 to 2020, Didi’s international business revenue accounted for 0.3%, 1.3%, and 1.7%, respectively, showing a trend of increasing year by year; but compared with Uber, in 2020, Uber’s overseas business excluding the North American market accounted for It is 46%. Therefore, in comparison, Didi’s current overall internationalization level is still low.

Considering that after the IPO financing, Didi will have more sufficient capital as the basis for overseas business expansion. At the same time, with the increase in overseas visibility after the listing, international market recognition is expected to usher in growth. Therefore, we believe that in the next 5 years, Didi’s market share in the overseas travel + food delivery market will usher in a rapid increase, expanding from less than 5% to around 15%.

Compared with Uber’s current overseas revenue of US$5.06 billion, Didi’s current overseas revenue is less than US$400 million. Assuming that Didi will expand its international business within 5 years, the overseas market share will reach 15%, and the revenue generated will be 34.5. About 100 million yuan, which is equivalent to taking 70% of Uber’s current market share within 5 years. Considering Uber’s growth, this level may be between 30-50%.

This also indicates that Didi’s overseas business has huge room for increase in 5 years, with a compound annual growth rate of more than 70%. With the continuous development of Didi, it will eat up half of Uber’s overseas market space and boost Didi. The revenue level of the overall business continues to rise.

Other businesses are the main cause of losses, but they also imply greater valuation prospects

From the perspective of profitability, with the continuous increase in investment in community group buying and autonomous driving, other businesses are currently in a state of continuous loss, and the scale is significantly enlarged, which is the key reason for Didi’s loss. In Q1 of 2021, the adjusted EBITA of other businesses will have a net loss of 8.08 billion yuan, which is close to the full year of 2020 (8.81 billion yuan).

Among other businesses, the Robotaxi business based on autonomous driving is most likely to become Didi’s new growth curve, which is also the key to further enhancing its imagination.

Didi’s autonomous driving business started in 2016. Based on its travel service providers, it has chosen the relatively easy-to-follow field of autonomous driving taxis (Robotaxi). According to CICC Securities, the market size is estimated to be RMB 1.4 trillion. 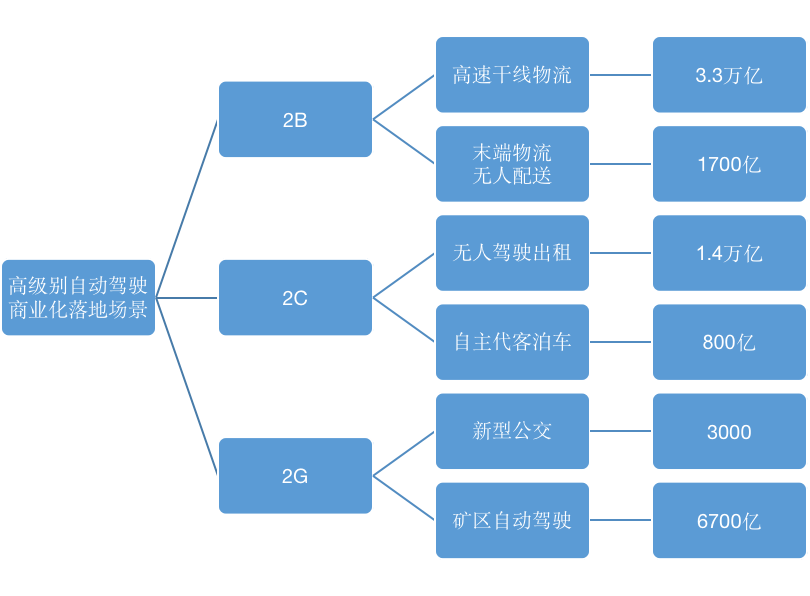 Although there is still a certain gap between Didi and Baidu and other top players in terms of technology and actual road test mileage, the market is optimistic about the prospects of Didi’s autonomous driving business.

First of all, as the largest shared travel platform in China, Didi’s business itself determines that it has the inherent advantage of accumulating massive travel data at low cost.

In the Robotaxi field, the technical difficulty of high-level autonomous driving lies in the complexity of urban roads. Under completely unmanned driving, whether the autonomous driving system can effectively identify and respond to the massive corner cases on urban roads. The cultivation of this learning ability of machines depends on a large amount of travel scenario data.

Through its online car-hailing business, Didi’s daily orders reach the order of tens of millions, and it can accumulate 100 billion kilometers of travel data every year. At the same time, with the help of the “Orange Vision” on-board camera system with a coverage rate of over 50%, it can monitor the car Safety data and off-vehicle driving data are collected synchronously. The massive real data scene library can cover most of the current long-tail scenes, effectively shortening the time period from data collection to data analysis, and can help the Didi algorithm to iterate and optimize quickly Autonomous driving technology.

At present, as the largest online car-hailing service platform in China, Didi occupies more than 80% of the country’s market share, and the number of active users on the platform has reached 377 million. Therefore, compared with other players who have to consider the layout of the Taxi platform in addition to technology upgrades, Didi’s platform identity gives it a broader space for commercialization.

On the whole, the beautiful vision for Robotaxi has brought Didi a broader valuation imagination. But from the point of view of its commercialization, according to CICC Securities, Robotaxi is expected to usher in a cost inflection point around 2025, and the real commercialization time needs to wait until after 2030. Therefore, considering that the actual commercialization time is too long, whether the business will become Didi’s second growth curve in the future is still uncertain.

But once Robotaxi’s business starts to be commercialized, as the market’s most promising technology + platform dual layout player, the autonomous driving business will inevitably open up Didi’s revenue growth space, and at the same time, it will greatly help its travel business cost reduction. Therefore, the Robotaxi business can give Didi a larger valuation imagination.

Is the 70 billion valuation reasonable?

According to the latest information disclosed in the prospectus, Didi plans to issue 288 million ADSs (corresponding to 72 million Class A common shares) for this IPO, with an issue price range of US$13-14/ADS. The calculated fund-raising range is US$3.74-4.03 billion, and the IPO valuation target is US$62-67 billion.However, according to WSJ citing sources familiar with the matter, the fully diluted valuation may exceed US$70 billion.

So, for the current Didi, is the $70 billion IPO valuation target reasonable?

We use the market valuation levels of Uber and Lyft to make a simple analysis and judgment on Didi’s secondary market valuation. Since Didi’s revenue recognition method for China’s travel business is different from that of other companies, Didi’s revenue was simply adjusted in accordance with Uber’s revenue recognition method. The final forecast is that Didi’s 2021 comprehensive revenue will be approximately US$9.89 billion.

Assuming that Didi’s corresponding price-to-sales ratio (PS) is 7.1, based on the IPO valuation of 70 billion U.S. dollars, it is relatively low compared to Uber’s 2021 PS average of 8.7 and Lyft’s 7.9, indicating that The current IPO valuation pricing is cheaper than similar companies in the market.

If we estimate the average PS 8.3 of the two companies in 2021, the reasonable market valuation of Didi is approximately US$82.08 billion. Consider the existence of a certain degree of market sentiment premium (Didi is the largest IPO company in the US stock market so far this year, and is also a typical representative of China’s new economy, with high market expectations) and liquidity premium (the Federal Reserve’s super-loose monetary policy leads to capital The market has ample liquidity), we give a 10% premium space, then comprehensively calculated, Didi’s reasonable market valuation range should be between 82-90 billion US dollars.

In summary, taking into account the sentiment premium and liquidity premium, the current pricing valuation of Didi’s IPO is obviously low, with a high safety mat, and there is a high probability that there will be a premium listing in the future.

According to the reasonable valuation range of US$82-90 billion estimated in the previous article, it means that Didi has nearly 30% of the incremental space; if the market’s attitude is more optimistic, then the market value of Didi will even hit the US$100 billion market. Close, it means that there is nearly 40% market growth space.

However, considering that the long-term Fed’s interest rate hike expectations have increased significantly, and the market’s liquidity is facing tightening, under this background, the valuation of US$90-100 billion is somewhat high for Didi, which indicates that Didi will digest in the future. The valuation pressure is relatively high, and higher performance growth may be needed to cope with it.