Investigation: Asanzo's procedure of removing "made in China" traces – VnReview


Television is the main product of Asanzo Vietnam Electronics Group during the past years, and recently air-conditioner has risen to second. Packaging and labels of Asanzo are always recorded "top of Japanese technology" and "origin of Vietnam".

After proving a series of companies importing Asanzo electrical appliances from China, we focused on clarifying that TV and air conditioner brand Asanzo is marketed in Vietnam, originating from Vietnam like Asanzo announced. ? To answer this question, we have followed hundreds of containers from China to Vietnam and "hacked" into Asanzo factory in Vinh Loc Industrial Park, Tan Binh (HCMC) …

In the early months of 2019, we clung to hundreds of containers of TV and air conditioner components from China to Cat Lai port.

On April 8, the group of combat journalists at Cat Lai port recognized Le Quang Company in District 12 and Van Doan Company in District 7 to process customs clearance for many electronic components containers imported from China. To avoid losing the mark, we randomly mark two containers of numbers TEMU3434 … and SEGU6321 … of these two companies to follow.

More than 8 am on April 9, the container truck number TEMU3434 … left Cat Lai port to run straight to Asanzo factory in Vinh Loc Industrial Park. A group of workers rushed to carry the carton into it. In this container, there are 6 types of TV assembly parts sold by Xin Ying Global Company to Le Quang Company, which are loaded onto RHL ASTRUM ship at Nansha port in Guangzhou province, China.

At 17:00 on the same day, container number SEGU6321 … of Van Doan Company also arrived at Vinh Loc Asanzo factory. The DCSZ190400 bill of lading … showing this container is loaded on board CASTORN at Shekou port (Shenzhen, China). Inside the container contains 402 LCD panels provided by Hong Kong Kangguan Technology Company.

Similar to air conditioning is also Chinese goods. Electronic group Asanzo announced in this hot sunshine season 2019 sold more than 160,000 Asanzo air conditioners. Where does air conditioning components come from while Asanzo does not produce parts? We divided many sources of searching for Asanzo.

Then, on May 31 and 1-6, this company received 5 containers of air conditioner components. These containers come from Ningbo Port, Zhejiang Province (China) to Cat Lai Port. Following these container trucks since leaving the port, we noted that most of them were taken to Asanzo factory in Vinh Loc Industrial Park.

So it is clear that most of the cargo containers from China have a destination, which is the Asanzo factory in Vinh Loc Industrial Park. So what does Asanzo do with this huge number of components before putting the finished product on the market?

To answer this question, we went to Asanzo factory to find the answer … 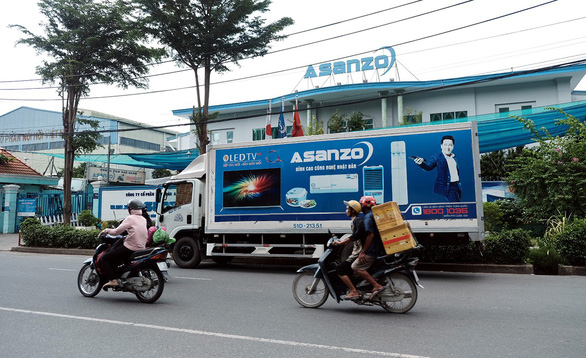 What is in the Asanzo factory?

At the beginning of April 2016, Asanzo factory gate had a notice of recruitment, we immediately applied for a job. Four days later, a woman named Kieu called for an appointment to the Asanzo factory in Vinh Loc Industrial Park for an interview.

Even though I deliberately said I didn't know anything about electricity, I never opened electronic equipment, but we still got accepted. Probation period of two months, salary of 4.5 million VND / month. A young man directly recruited said the job was very simple, just attached small components and screwed up so there was no need of experience or professional qualifications.

The first day we entered the factory, we were given a pledge by a Phuc name manager to record 12 articles that were read and signed. In which the 10th thing sounds serious: "Protecting the company's assets and technology secrets. Keeping the company's products confidential. Do not bring any business products or documents out of public company ".

Saying that the factory is monumental, it is actually an assembly factory with about 12 lines and about 200 workers. Working for quite a long time but we did not see the factory producing any components. Asked the long-time workers, they said components imported from China were brought here and assembled, not manufactured.

We were assigned to the only one apprenticeship line a day and stood as other workers. Each line has a stack of tutorials on Asanzo's television assembly process.

Accordingly, there are only 6 steps to "produce" a television. Step 1: take the LCD panel from the output bin and place it on the line and insert the circuit board. Step 2: attach signal wires, LED wires, power cords and cables to the circuit board and panel. Step 3: check and attach the back cover. Step 4: shoot screws. Step 5: Overall check the TV. Step 6: Cleaning and stamping.

As soon as the LCD panel is removed from the carton, put on the "production" start line, we see at the right corner, a rectangular ribbed sticker is pasted (paste in the same position and has the same size). with a torn stamp in the Asanzo TV that we bought at a previous electronics store). On the stamp printed model information, LCD panel codes. Especially the capital letters "made in China" right above the barcode.

According to Asanzo's manual for the assembly process, the third-place worker is responsible for removing the "made in China" text trace. This person will put a stamp on the panel, circuit board and ribs before attaching the back cover. The sticker is on the panel and the circuit board is rectangular, the left corner is ASG, the right is 12 boxes from January to December, and the lower left corner is the box for the year of manufacture.

Right next to the ASG stamp, there is also a bar code stamp. Asanzo also printed the actual photo of the LCD panel with "made in China" stamps on the document to instruct workers to use ASG stamps and stamps with overlapping bar codes to cover the words "made in China".

However, when standing on the line, we were asked by the manager to remove the stamp with the word "made in China" on the LCD panel, not stamped like a guide.

Because the stamp is very difficult to remove by the Chinese supplier by hand, we are taught to use another stamp (like duct tape) to cross over the stamp, then pull back. The face of the stamp is peeled off immediately. Information of the model, "made in China" is lost. The underside of the small side stamp remains untouched until the TV is packed and sold to consumers. 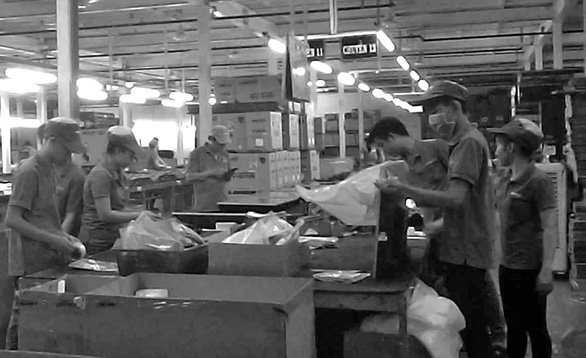 The final stage of the "production" of the television process at Vinh Loc Asanzo Factory: packaging
marketed

During our time in the factory, we deliberately just tore a corner and left the words "made in China" (about 10 LCD panels). The workers in the following locations only found the return, forcing us to remove the 3-digit LCD panel. The rest still passed through to put TV in the carton to market.

And the work at "factory" in Tan Binh Industrial Park is much simpler. There is only one household electrical assembly line with about 30 people working. Most of the factory area is used to store components and finished products.

Since we are "new soldiers" so the first time only can be delivered to the box containing components with the words "made in China" put on the line for assembly workers. In the first few days working here, we just opened the crate to get components from the electric stove to assemble. Each carton has two compartments, each containing 5 sets of kitchens with pre-printed blue Asanzo letters.

After putting the electric stove on a conveyor belt, a male worker used a tuffinel to remove it into two parts, then took a small stamp with the word ASG stuck on the board. The female worker stood opposite the heat-generating assembly with a circle, concave, about 20cm in diameter. Only through a few stages of assembly and stamping, the electric stove is put into a packed carton.

According to Tuoi Tre