The cheapest product in Intel's 9th-generation chips, the Core i5-9400F is expected to draw users' attention from AMD – Intel's "unkind" rival, which is reaping certain successes with Ryzen chips.

Launched on October 9 in New York, USA, Core i5-9400F is part of Intel's 9th generation chip line "Coffee Lake Refresh". The most notable point of the product is that Intel decided to cut off the integrated graphics chip (iGPU) on the chip, supposedly to reduce costs and put pressure on AMD – the name is going against with Intel strategy when integrating iGPU for two Ryzen 3 2200G and Ryzen 5 2400G products.

Produced on the 14nm ++ process, it is a shame that Coffee Lake Refresh is not the first 10nm chip from Intel as previously speculated. The smaller process will help the chips faster, more powerful and still save power effectively. Core i5-9400F carries in itself the responsibility of i5-8400, the chip has caused fever during 2018 with the first time Intel equipped 6 real employees for its mid-range Core i5, so the 14nm ++ process continues Continued use may make Intel fans feel a bit annoyed. 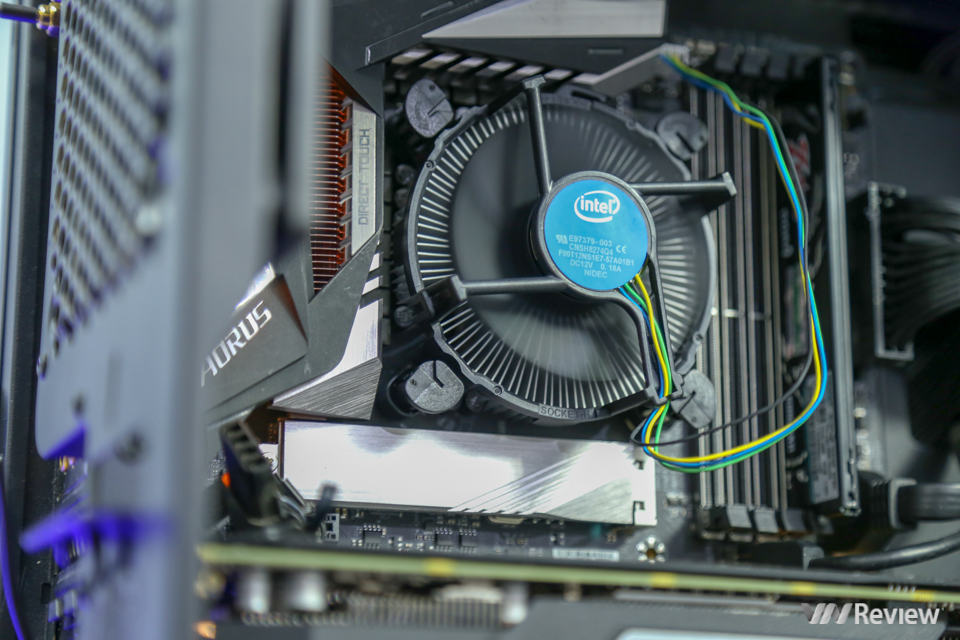 VnReview will not go into the design characteristics of Core i5-9400F because a) The external design of the chip is not a big problem because … anyway when you use it, you will not see them and b) CPU design generally the same, whether AMD or Intel. The only thing you need to consider when it comes to the design of the CPU is its socket (the place to connect the CPU to the motherboard), and the Core i5-9400F is LGA 1151.

Therefore, any motherboard in the 300 socket LGA1151 series (eg Z370, B360, …) will theoretically fit Core i5-9400F, but the motherboards are manufactured before the chip of Intel may have to update the BIOS to fully compatible and maximize its capabilities. 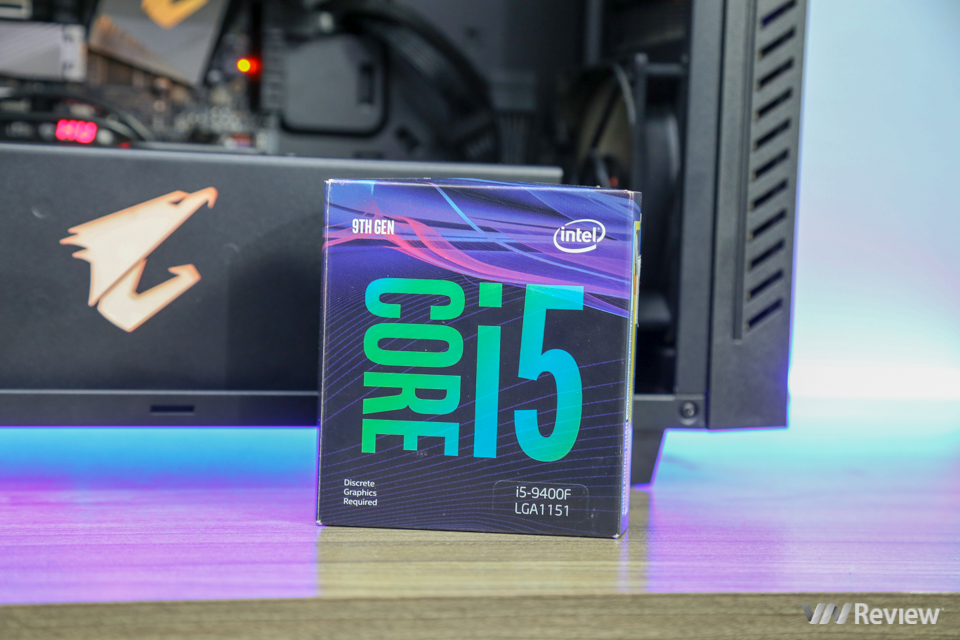 From the 8th generation Coffee Lake, Intel has changed the color of its product box to purple instead of blue, which looks more attractive and youthful, attracting the attention of gamers. Inside the box still comes with Intel's "legendary" radiator fan. 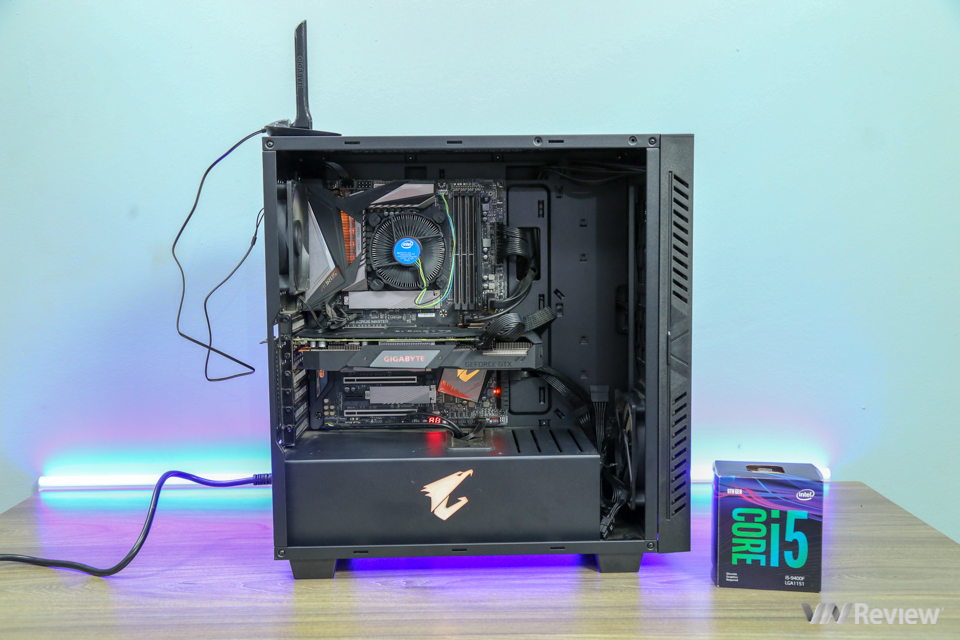 Thanks to Thuy Linh Computer for supporting the product so that we can carry out this review.

Benchmark: better than the previous generation

The same is produced on the 14nm ++ process, which can basically describe i5-9400F as the i5-8400 which is slightly improved with basic clock and maximum clock speed but cut off by iGPU. All the remaining parameters, from 9MB cache, maximum memory bandwidth of 41.6GB / s to 65W power consumption, even the suggested retail price of 182 USD (according to home page information Intel), i5-9400F are the same as i5-8400. Therefore, the i5-9400F will only have slightly better performance, which is most evident through benchmark tests.

In all benchmark posts of VnReview, all settings are left to the default option. 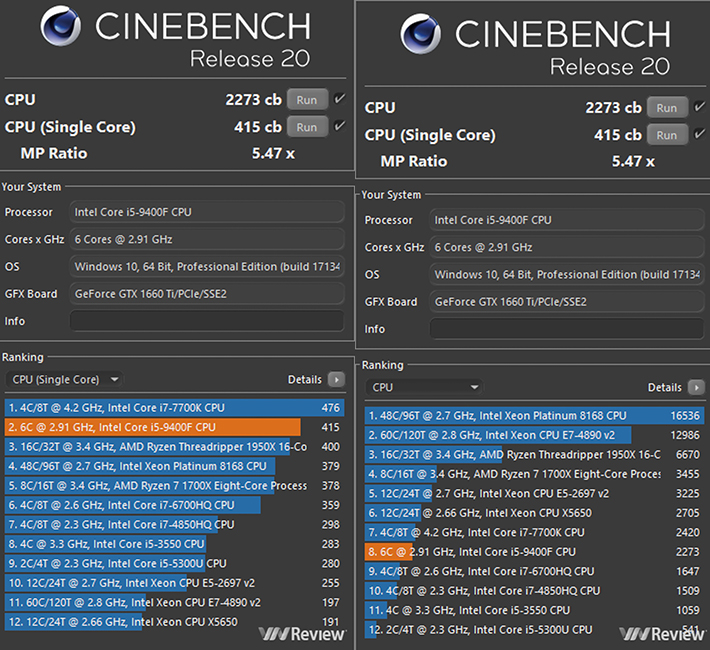 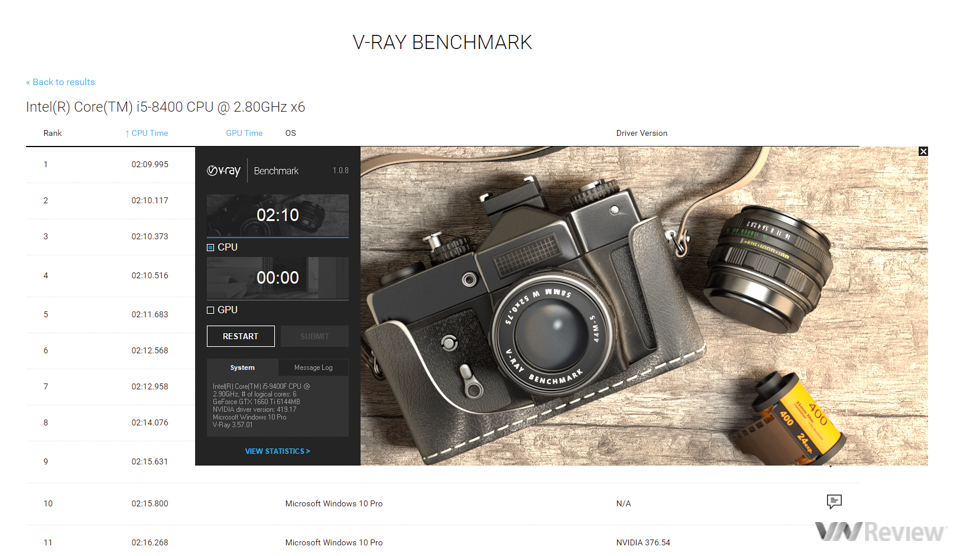 V-Ray Benchmark is also a very reliable software for measuring rendering capabilities. In this test, i5-9400F completes the task in 2 minutes 10 seconds, on par with i5-8400 as you can see in the picture. 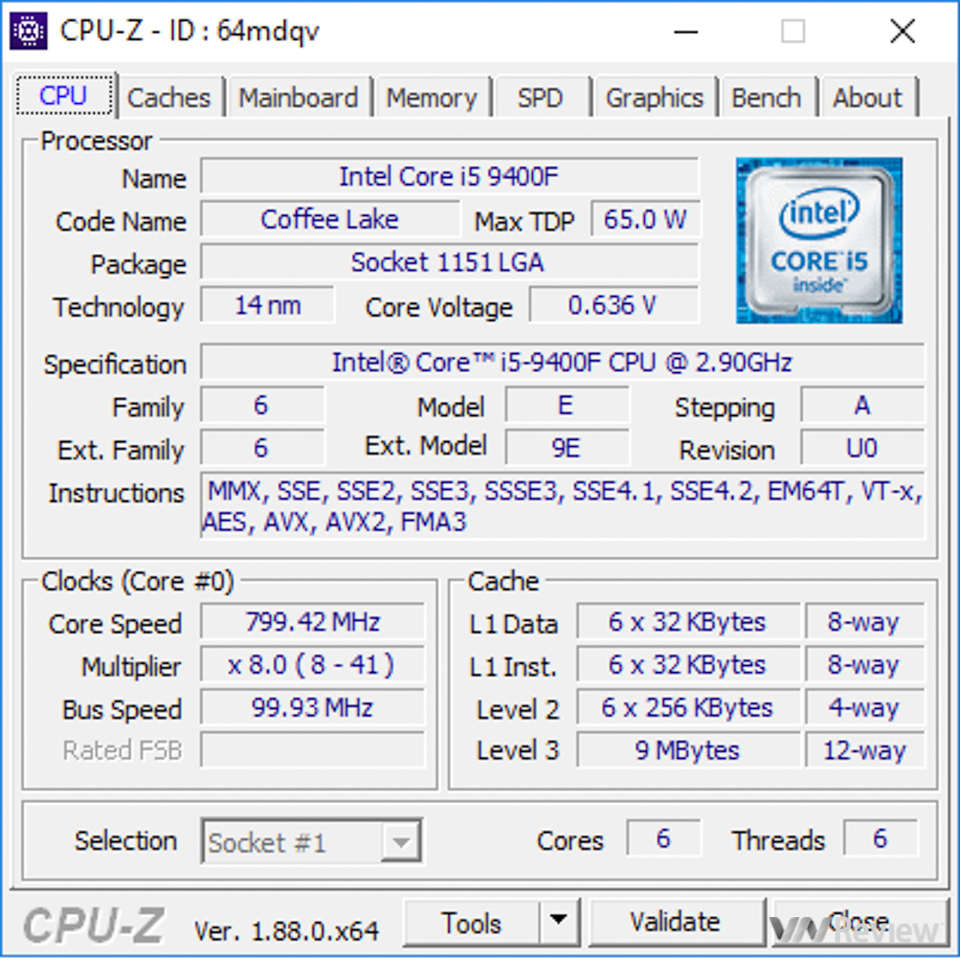 Next is CPU-Z, a very popular tool for both Windows and Android users for the purpose of checking their product specifications. This time, the i5-9400F had a higher score on a single benchmark benchmark, but "lost" with a difference of just one point at the multi-core benchmark. 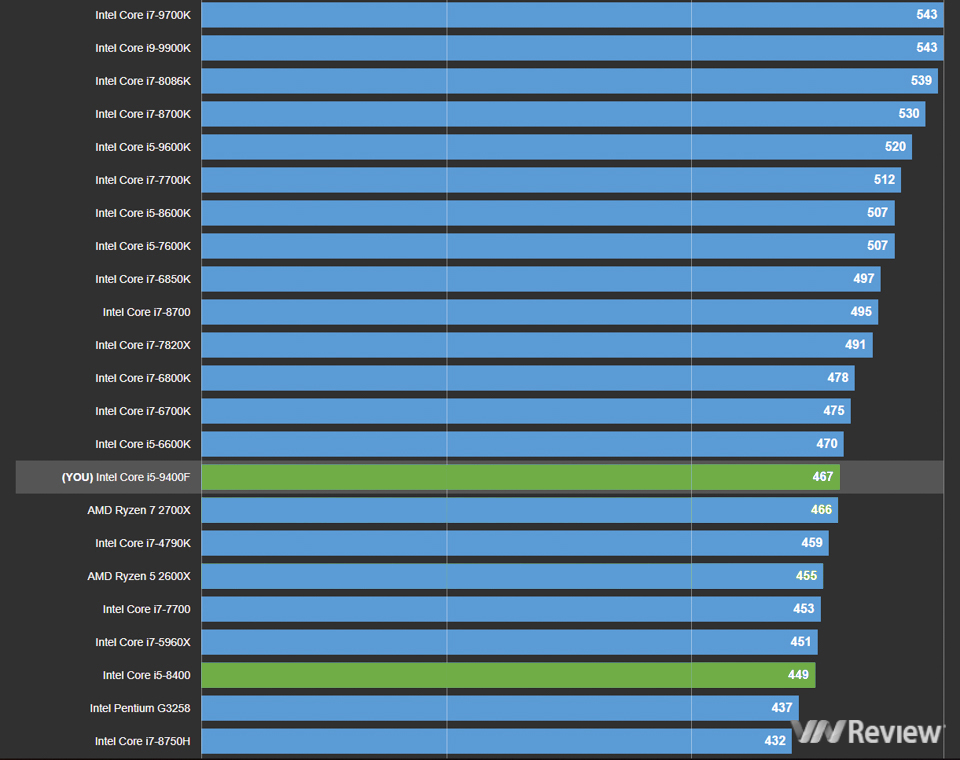 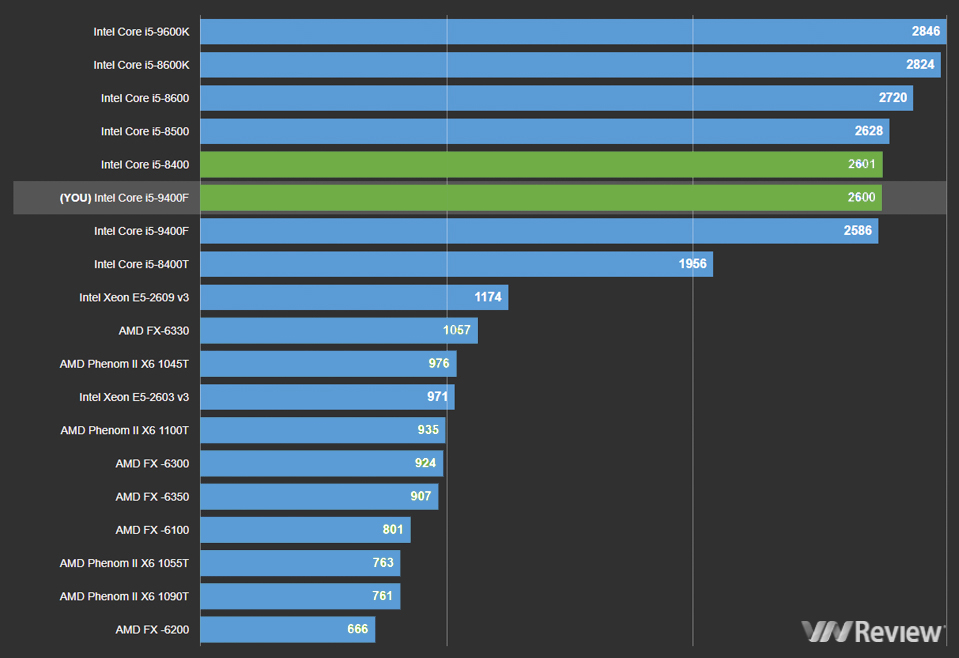 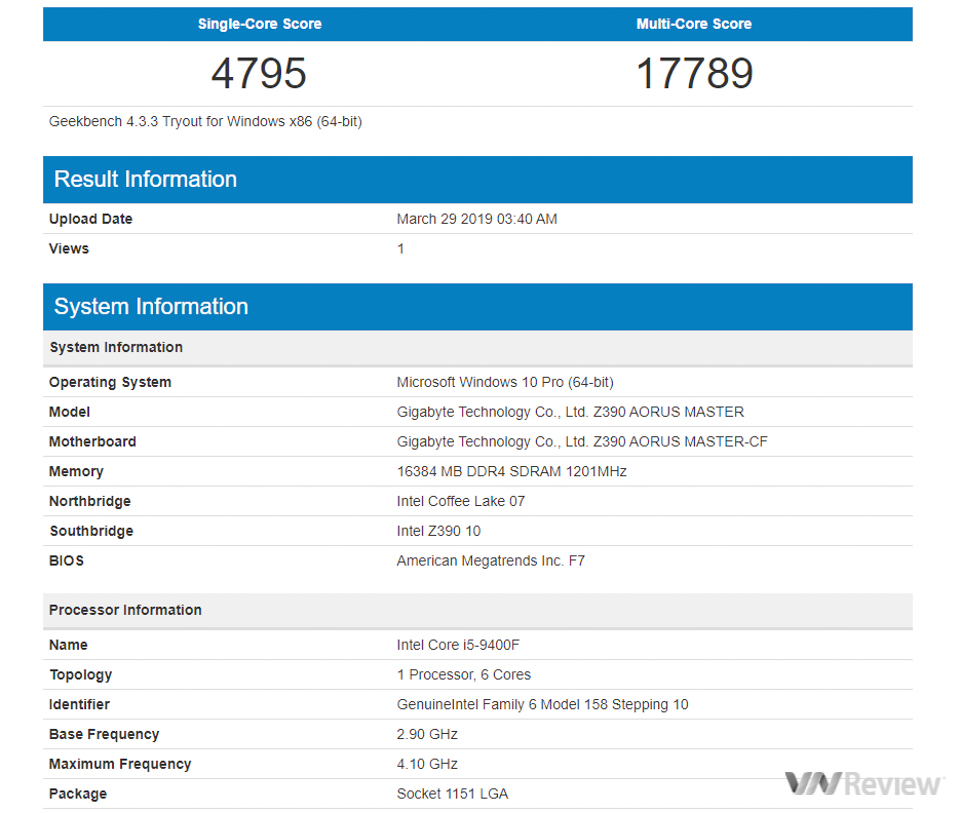 Last but not least, it's the 3DMark toolkit. 3DMark has a lot of benchmarking articles for different needs, but VnReview will choose three benchmark articles: Fire Strike, Sky Diver and Time Spy. 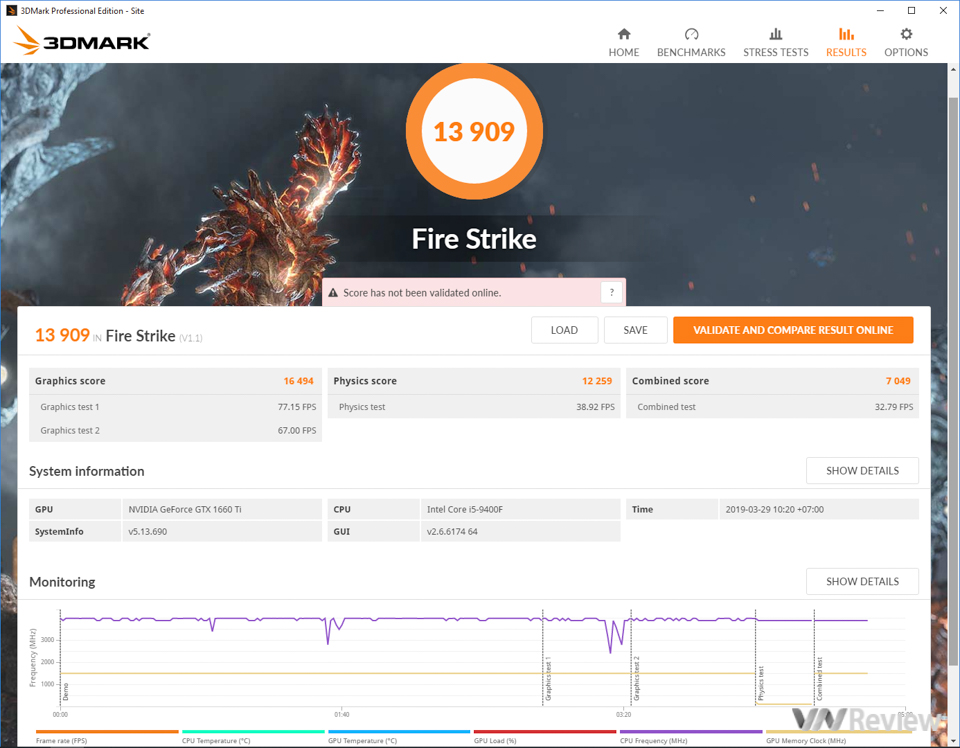 Fire Strike is a benchmark for high performance PC gaming based on the DirectX 11 graphics library with Full HD resolution (1920×1080 pixels). In this benchmark, i5-9400F reached 13.909 points 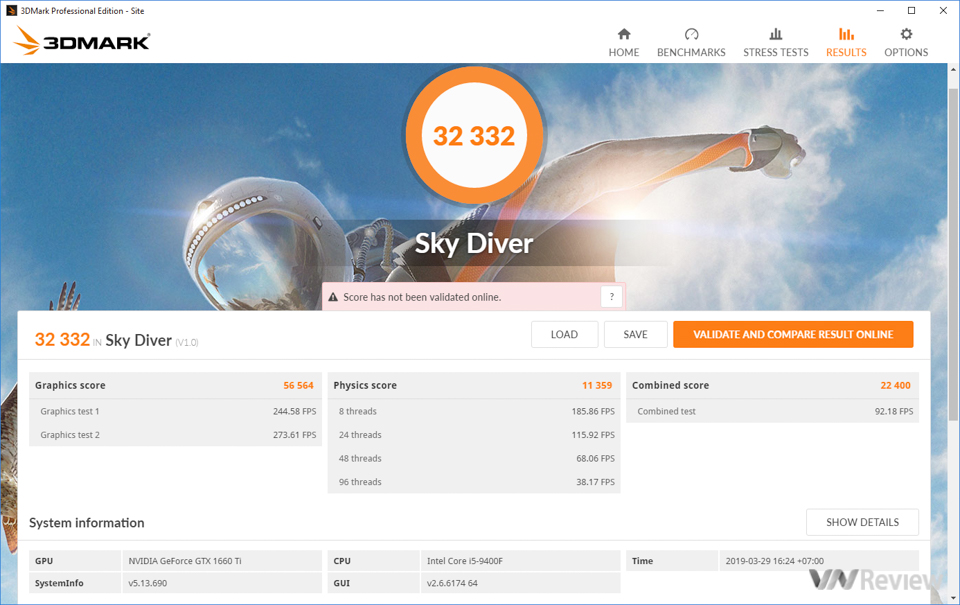 Sky Diver is a benchmark for gaming laptops and mid-range desktop computers, also based on the DirectX 11 graphics library with Full HD resolution but lighter than Fire Strike. i5-9400F reached 32,332 points 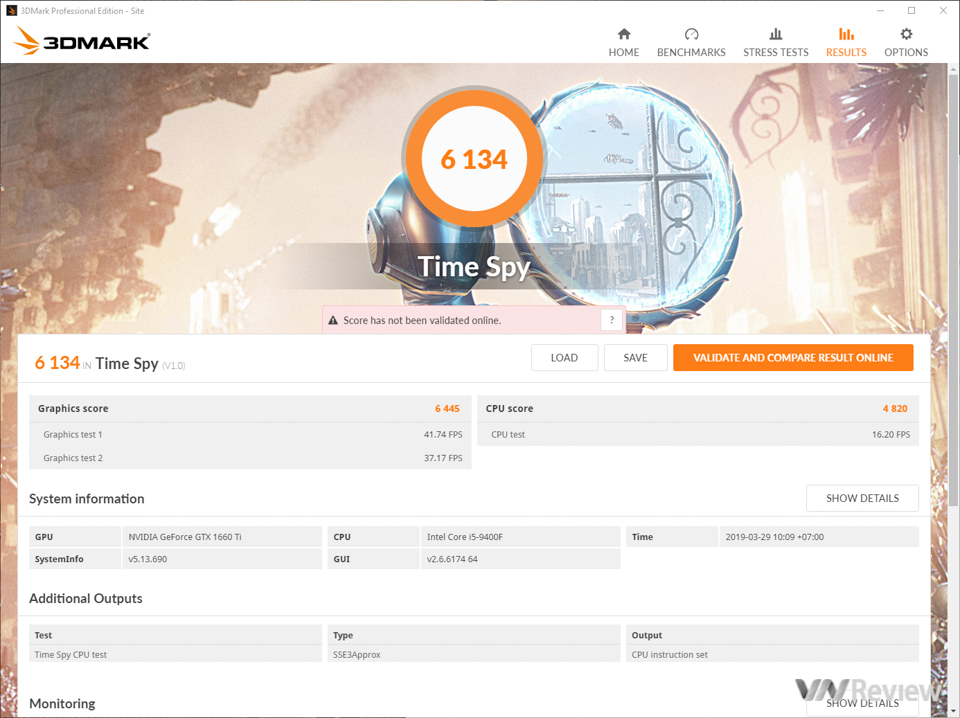 The heaviest of the three, Time Spy for PC gaming running Windows 10. Based on Microsoft's latest DirectX 12, Time Spy is the ideal benchmark to test the performance of newer graphics cards. VnReview test system reached 6,134 points

Overall, the i5-9400F's benchmark score is equal or just a bit higher than the senior i5-8400. Considering this criterion, it's hard to say that the i5-9400F is a real upgrade, but perhaps this is not Intel's purpose for this chip.

Not just graphics cards, CPUs are also very important for users' gaming needs. When the CPU is too weak, the graphics card will not be able to fully utilize its "power" to increase the number of frames per second (FPS) for a smoother experience, also known as "bottleneck". Through some quick experiences, the i5-9400F and GTX 1660Ti are a formidable "double-faced" pair that can play every game today at Full HD resolution regardless of any graphic setting.

The games in the test of VnReview are set to the highest level of graphics, turn off the feature of limited frame and automatically adjust the configuration. 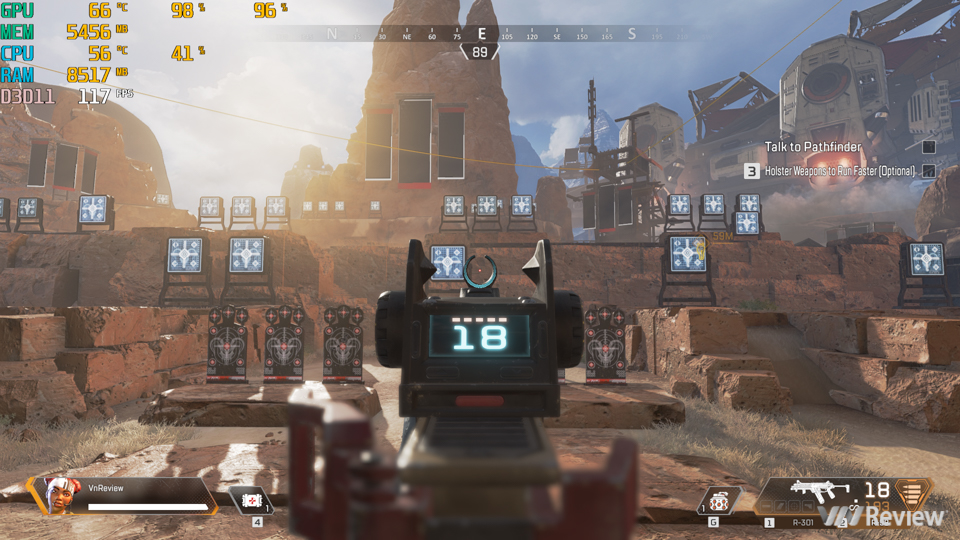 With the hottest battle royale game today is Apex Legends, VnReview system always fluctuates in the range of 115-120 FPS, very smooth and without jerky, lag. As can be seen from the image, the GTX 1660Ti is fully operational, while our chip is only 41% active. In other words, with a more powerful graphics card, FPS can be pushed even higher. 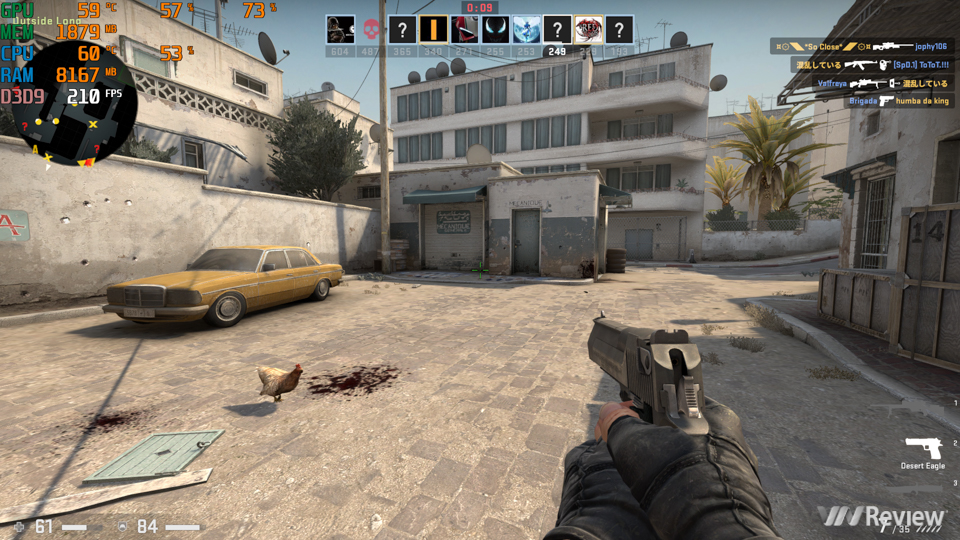 In the legendary Counter Strike – Global Offensive shooter, FPS is always above 200, suitable for gamers who own high-frequency screen scans. Both our CPU and graphics card are only half active. 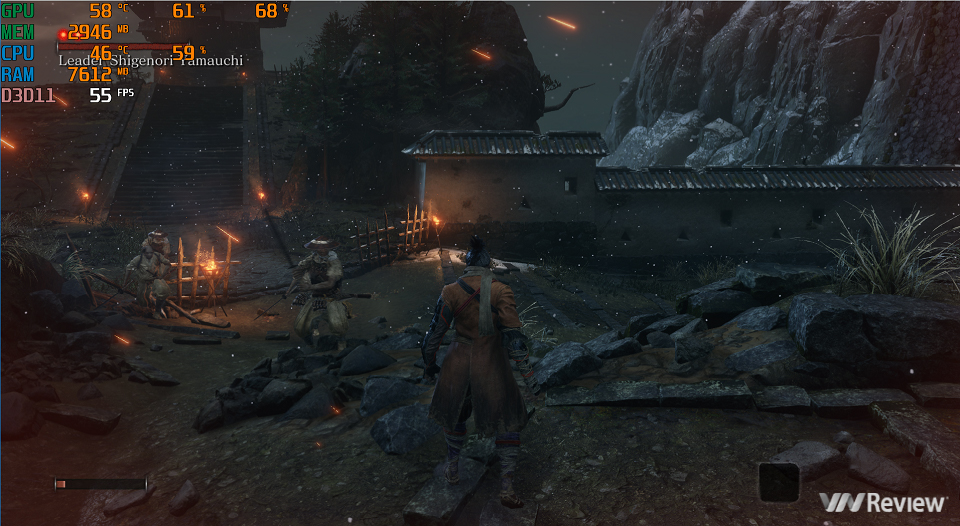 Sekiro: Shadows Die Twice is the writer's favorite game, developed by FromSoftware, who is behind the famous Dark Souls series. Unfortunately, this game locks the frame at 60FPS and there's no way to disable it. In some scenes with many effects, FPS has dropped to about 55, but has almost no effect on the experience.

The temperature is stable, the fan has enough support

Test in the room with air conditioning, room temperature at 25-27 degrees Celsius, i5-9400F works quite cool even VnReview only uses the fan radiator included. 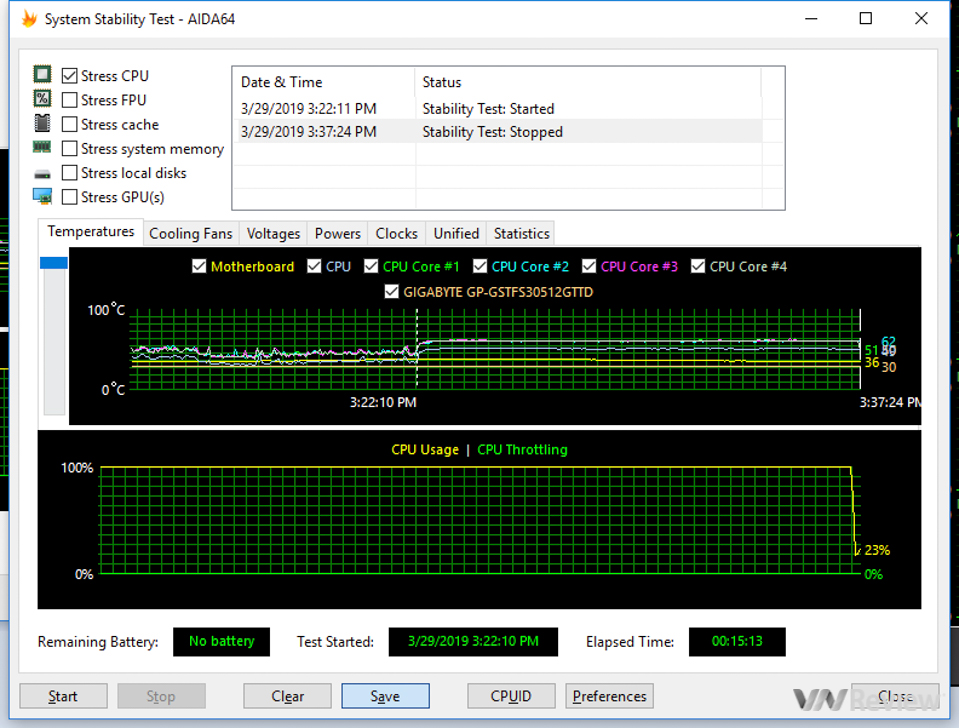 Tested with AIDA64 System Stability Test system's stability measurement in about 15 minutes, i5-9400F is only up to about 63 degrees Celsius, still within the safe range and not "squeeze" (Throttle). 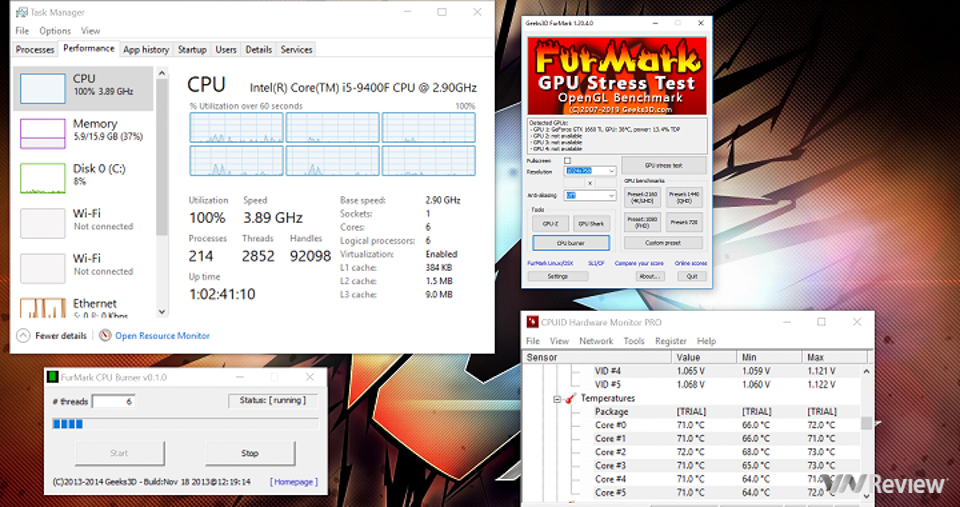 However, when using the CPU Burner of FurMark tool, the temperature of i5-9400F has reached 70 degrees Celsius, forcing the radiator fan to operate at maximum capacity and we can hear noises even though the case close.

When playing the game, the temperature of i5-9400F ranges from 55-60 degrees Celsius, but the games that VnReview tested are not really heavy on configuration. Therefore, if you regularly render or play heavy games, you may want to invest in a more efficient radiator.

Summary: worth buying or not depends on demand

Is cutting down integrated graphics chips a good idea? Yes, because consumers are always welcome to have more choices. The person who benefits the most from Intel's decision is those with affordable, already available or plans to buy a graphics card and do not need iGPU.

However, with insignificant increase in performance over the previous generation, plus troubles that may appear regarding the BIOS, perhaps content creators will choose for themselves a Coffee Lake chip with iGPU, both save a small amount of money from graphics cards, and avoid unnecessary headaches.