2 years since the first time driving the Civic 1.5 L version, the writer has had exciting and thrilling experiences on the new RS version of the Honda Civic product line.

The charisma of a room playboy

In contrast to two years ago, Honda unveiled to Vietnam market the 10th generation Civic product that caused a lot of media noise because of the makeover after years of losing rivals Toyota Corolla Altis or those coming after like Hyundai Elantra or Ford Focus. Unfortunately, at that time, Decree 116 was issued, which restrained the happiness of Vietnamese customers when they were satisfied but did not have a car to sell.

In March 2019, Honda Vietnam (HVN) did not disappoint users when it launched the facelifted E / G / RS version to replace the old E / G / L model. But this time, only the RS version uses the 1.5L Turbo engine is positioned as a strategic card to compete with rivals such as Mazda 3, Hyundai Elantra or aim for the higher segment models. like Mazda 6 or Kia Optima when the price difference is not too big. 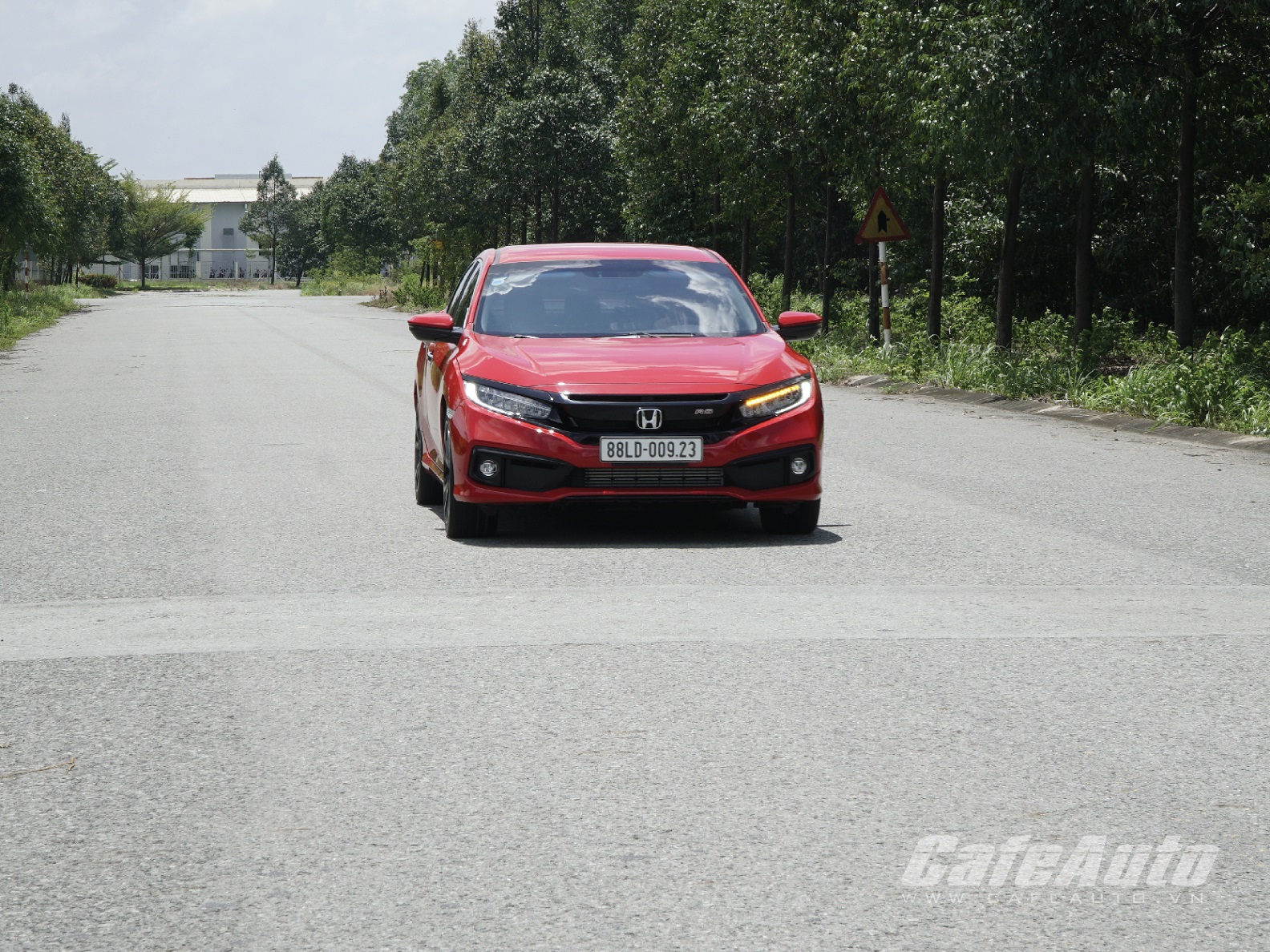 If the 1.5L Civic is more about elegance and gentleness, the RS version has changed to be stronger, no longer a scholar. In other words, today’s car exudes the spirit of a ceiling player. Because of the details that used to be chrome plated, now it is painted black with the Honda and RS logos and sandpaper pieces to bring a new look, though not much changed in design. Even with this style of design has made Civic score visually when compared to rivals in the segment. 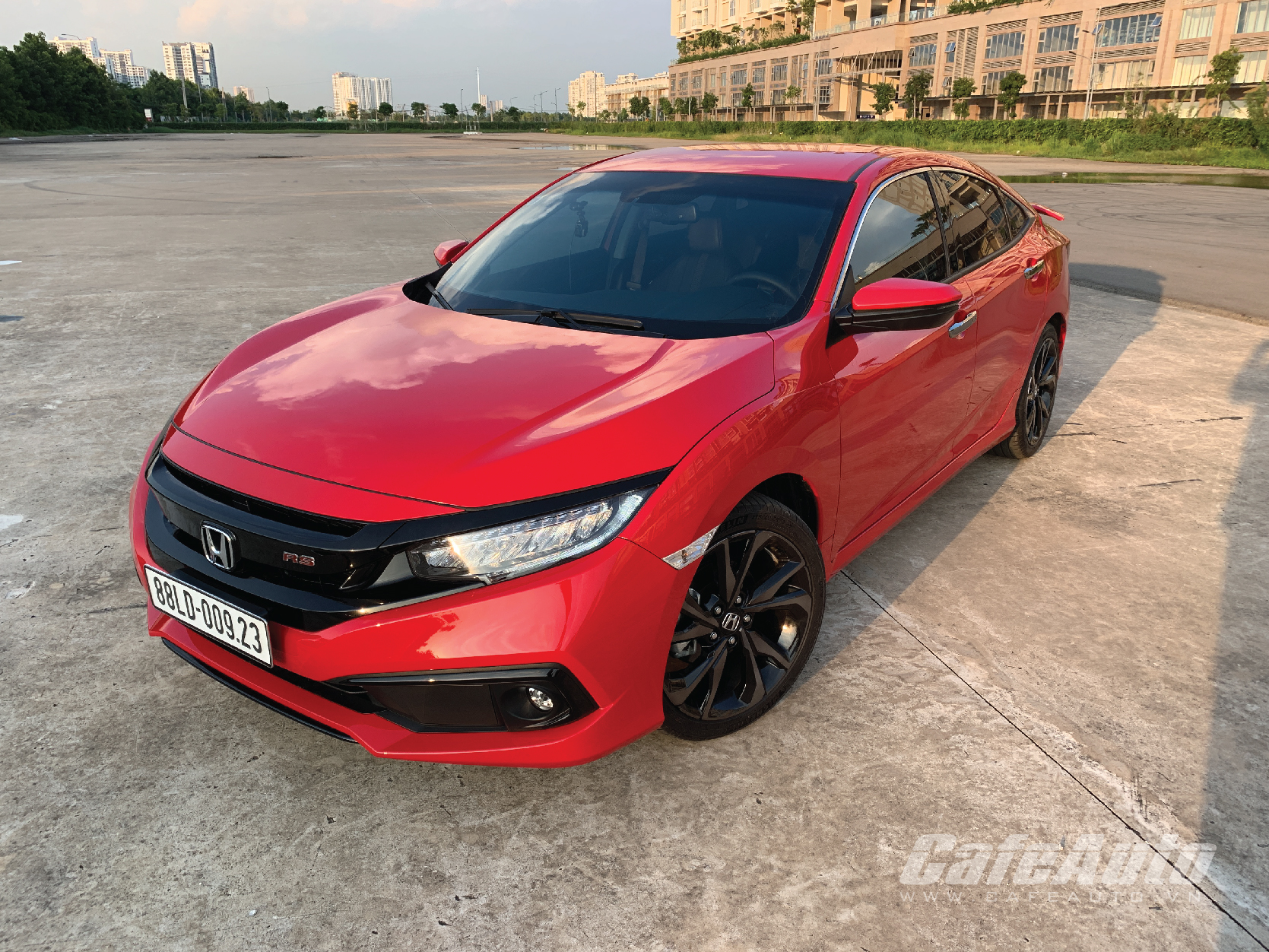 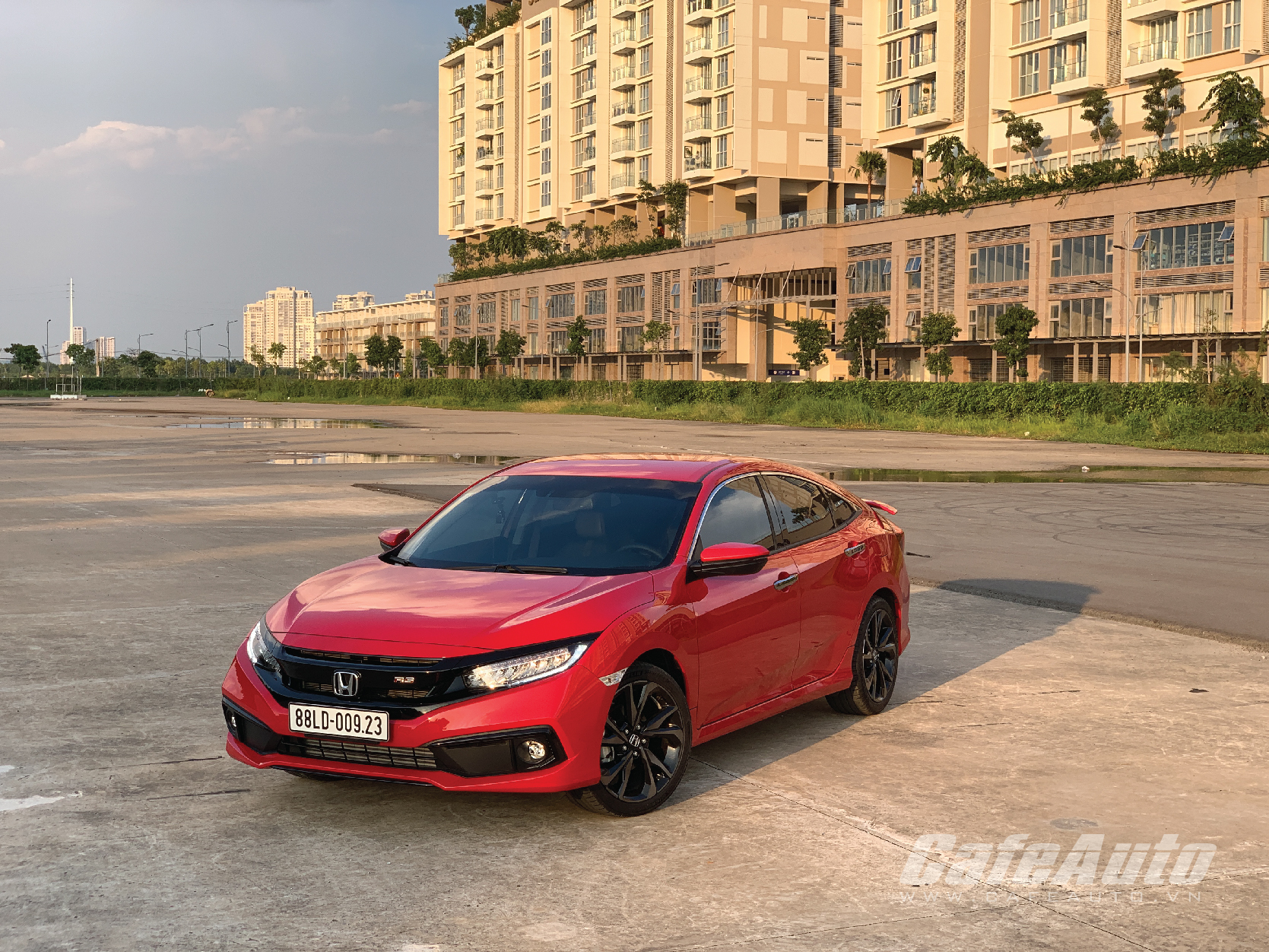 Usually on sports-oriented cars, users will often replace the bodykit, bigger wheels, the wings for a more body shape, but they are tired of registering now, Honda has erased that worry and the equipment is always included. 18 inch black wheels, sports wind. This is also the detail that the writer feels most satisfied on this version. In addition, Honda is also very pleased with customers, when upgrading the remote start feature, a valuable option that rare models in the price range or the same segment have, extremely suitable for sunny weather. hot current. 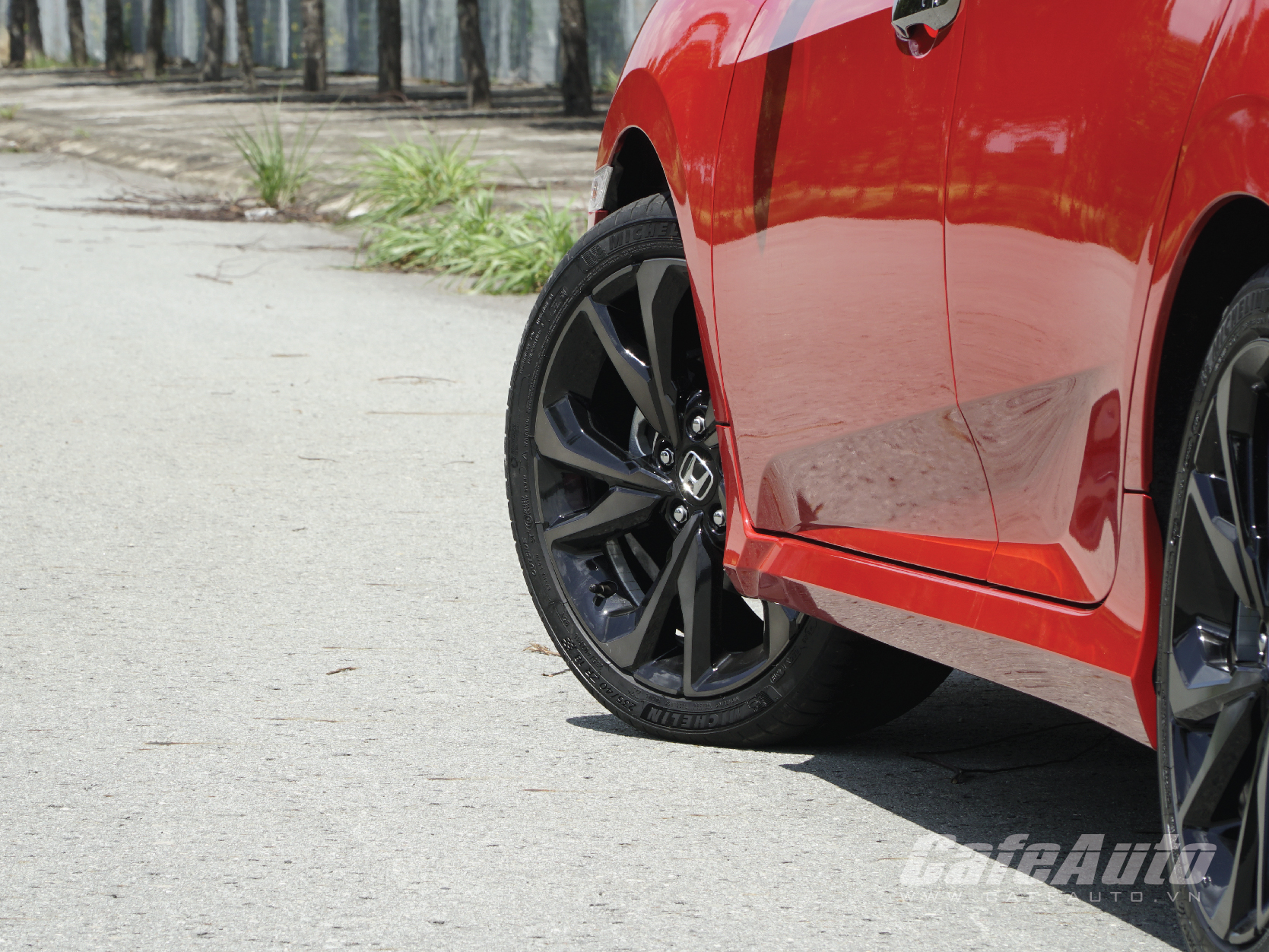 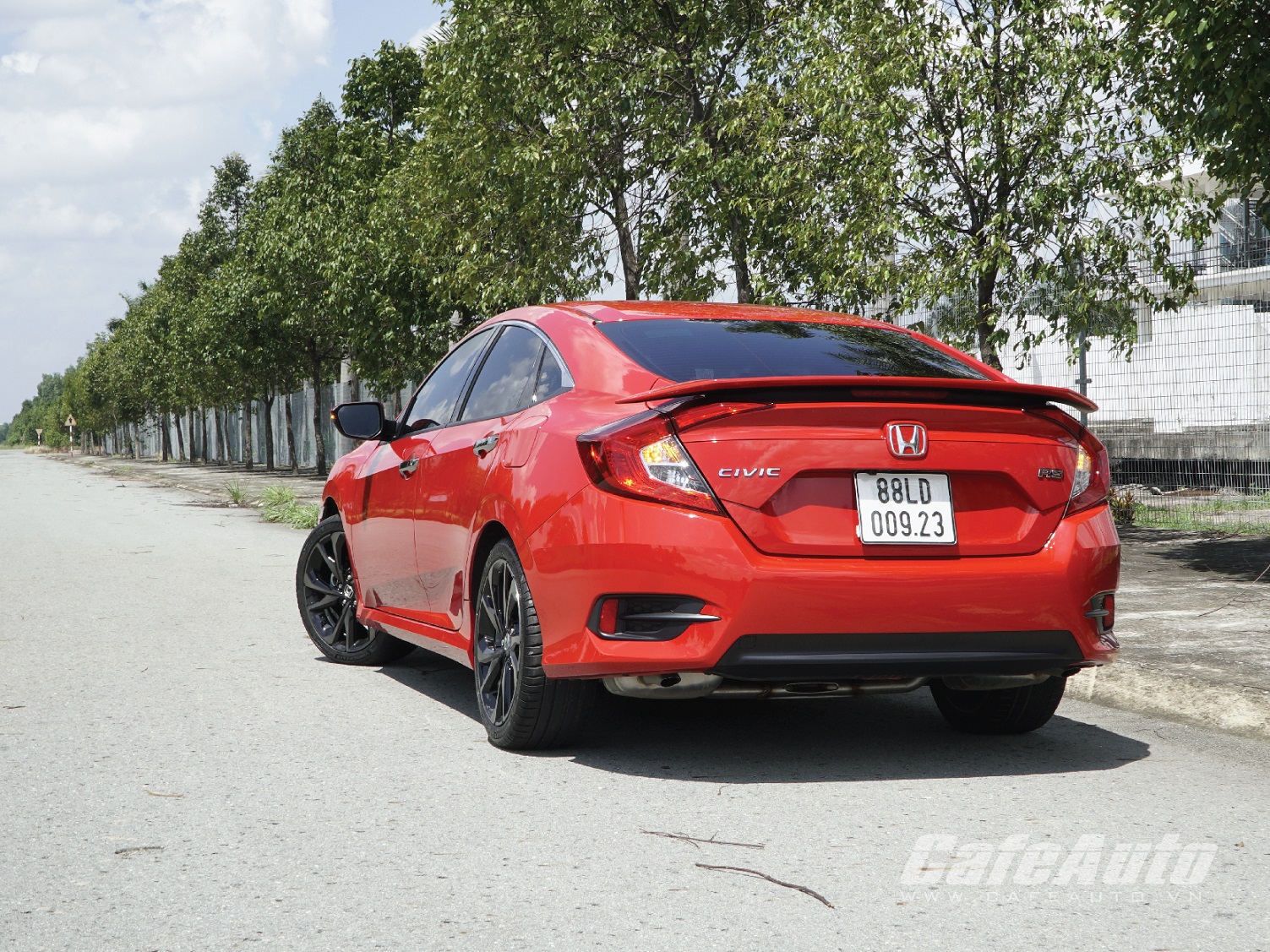 In addition, on the most advanced version, Honda is extremely powerful, such as 18-inch black painted wheels, sporty wings … that bring Civic closer to sports cars not just family cars. again. Those are the two details that people feel extremely satisfied with this new generation Civic RS, no longer have to worry. Attached to that, the cooling system is raised to 2 independent areas allowing users to customize the temperature according to their individual preferences and help to cool faster on hot days. The writer himself found that, when the car was in operation, the cooling system was faster and later than in the old version, even the back seat was cooler than the old version, even many times the back seat had to suggest raising the temperature, but unfortunately when taking the outside wind, the odor filter is not very good, still quite aware of the smell from the outside. 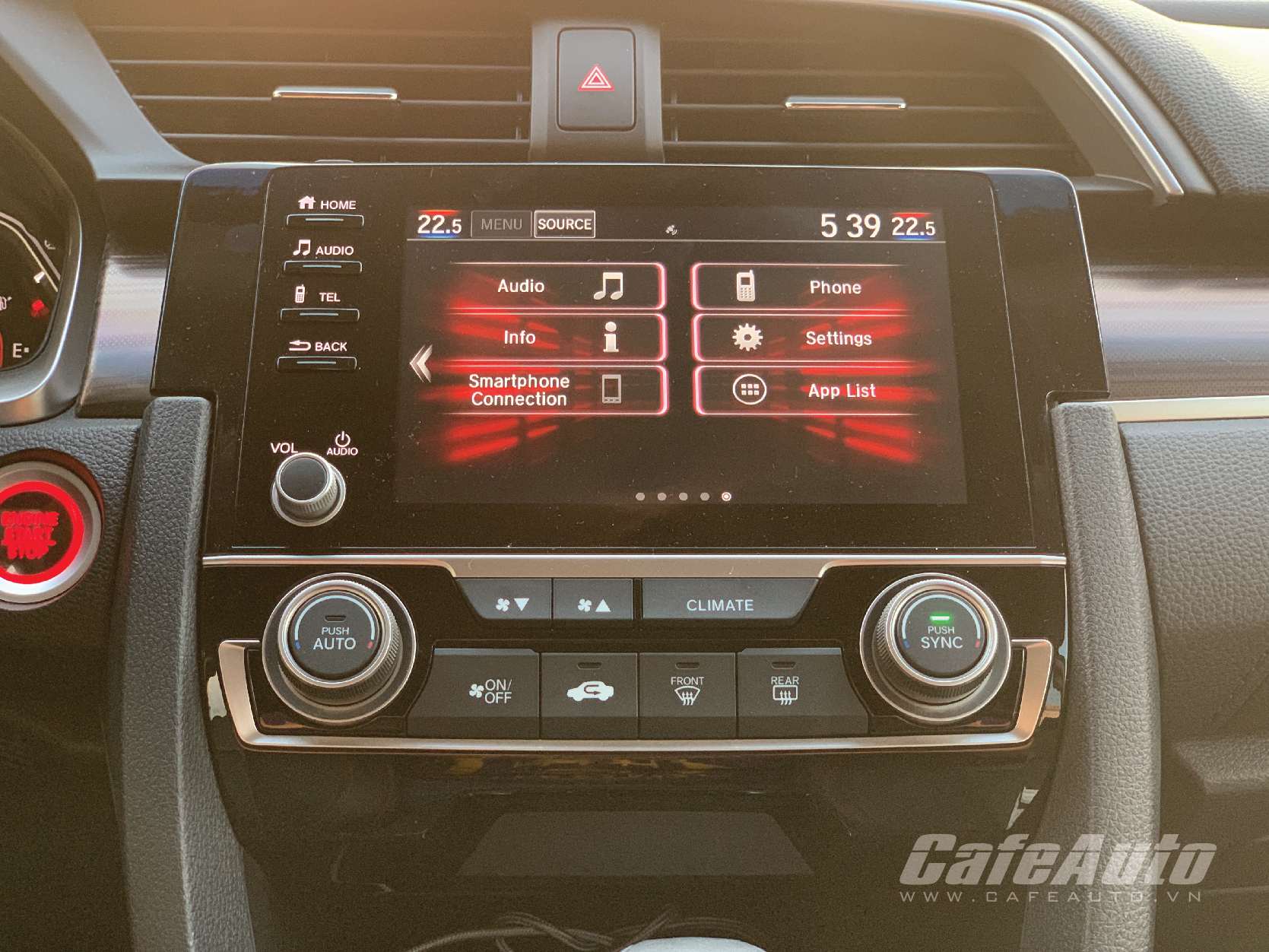 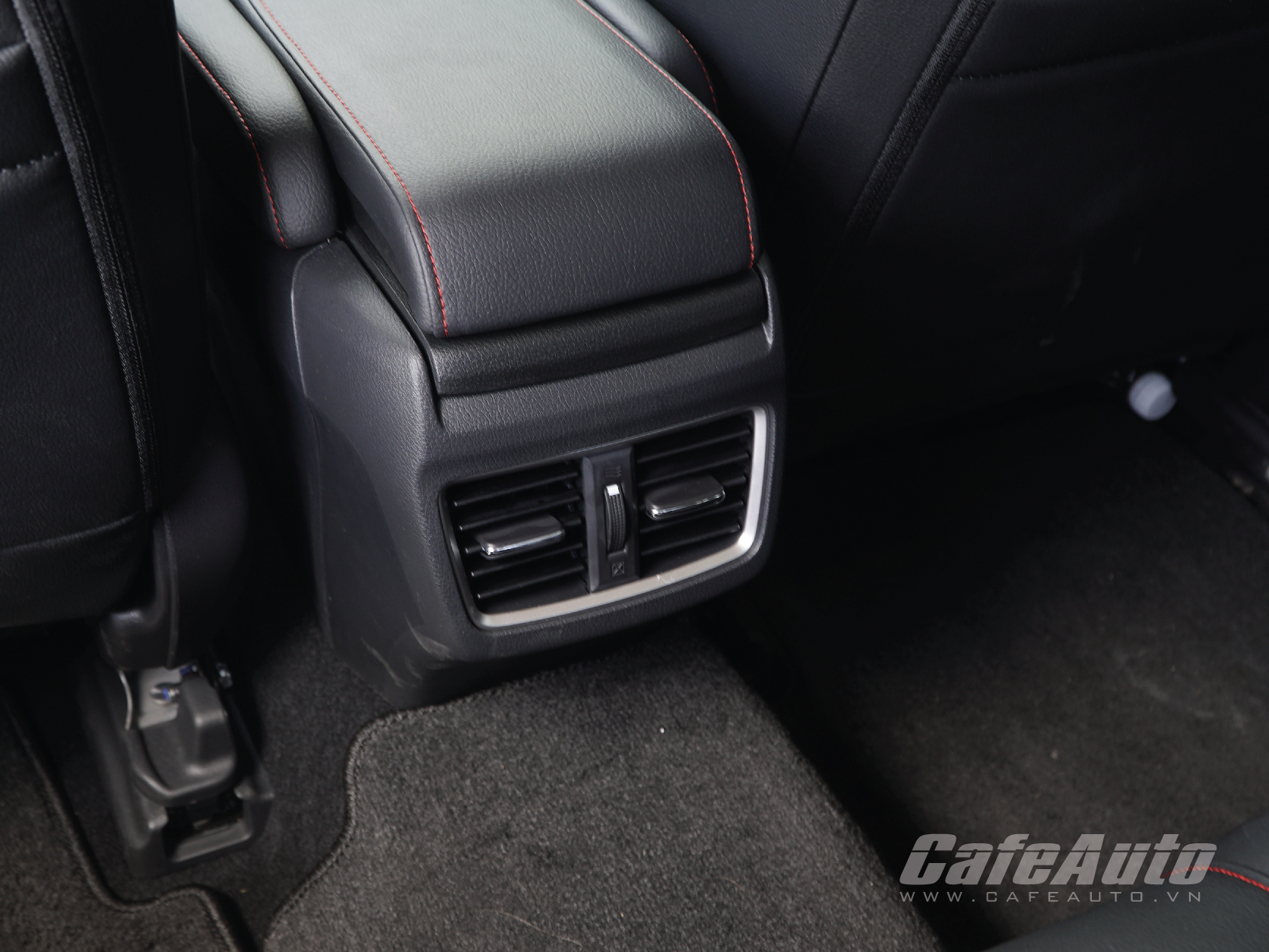 Honda Civic RS brings clear visual emotions, sportier appearance, more eye-catching, easier to create attention, increase the “cool” when getting off the car. The rest of the lighting system is not much different, still lights, position lights, fog lights are full LED. The rearview mirror is still integrated with turn signal turn signals and now automatically closes when the door lock is pressed. All these new details have brought Honda Civic out of the image of normal C-class cars and it is also difficult to locate the car in any segment. If you are a lover of Civic Type R, the RS version will help users satisfy their craving because it has approached so many of the high-performance cars ever displayed at VMS 2018. 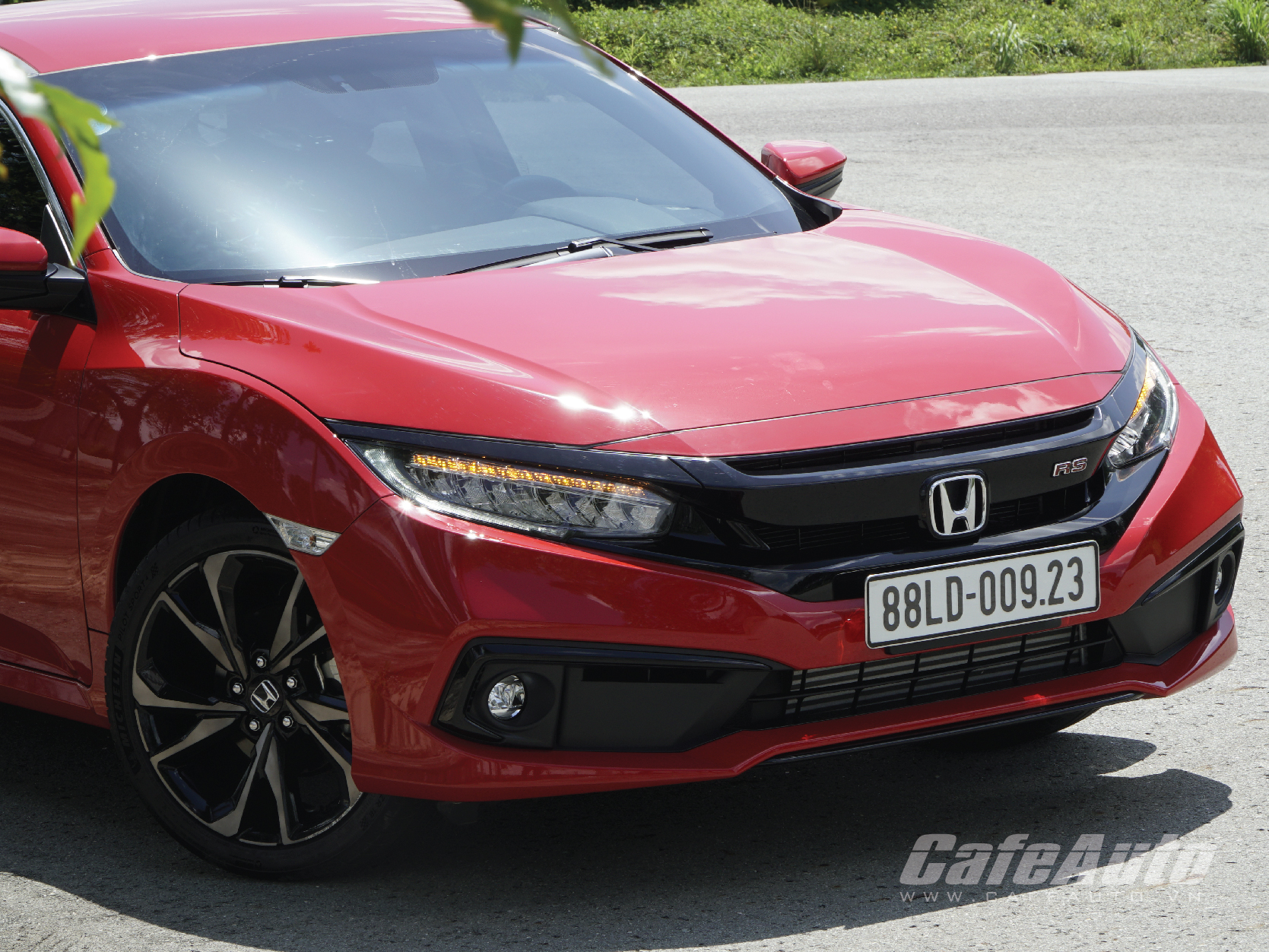 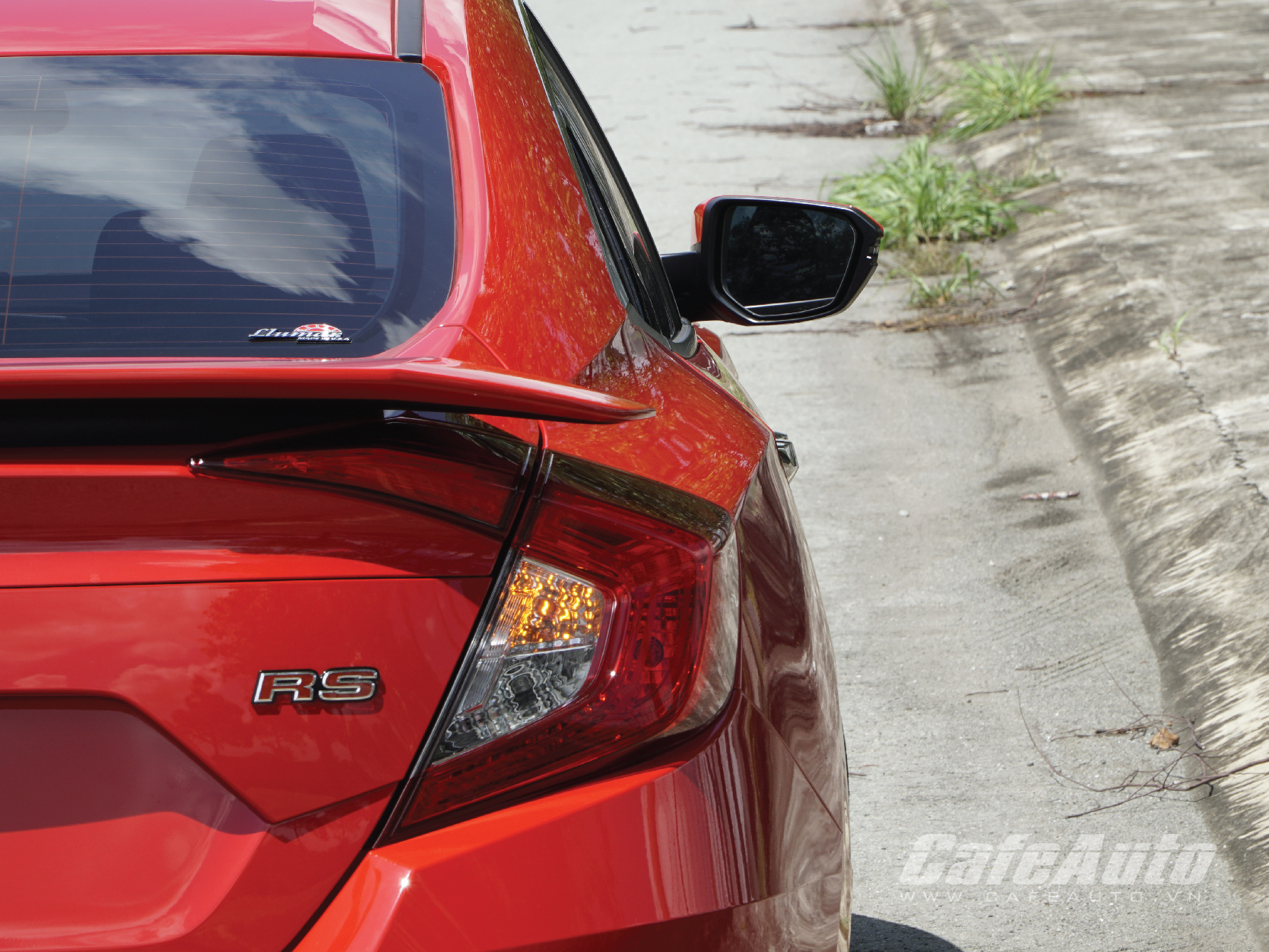 The exterior is like that, the interior is also greatly refreshed can say 70% different from the old version. Sitting in the car is “airy” and “wide” is what the writer feels, this is also very unique identity of Honda often gives more space than the car of the same segment. The first difference can be said is that the steering wheel is wrapped just for that feeling more sporty, cooler, the old touch keys were replaced with physical hard keys for a more realistic feeling. The removal of the touch keys is also related to driving safety when helping users focus on driving rather than “touching” the touch keys. Looking deeper, the electronic clock face on the car is more sporty when replaced with a red backlight for a stronger visual effect than the blue “peace” backlight on the old version. 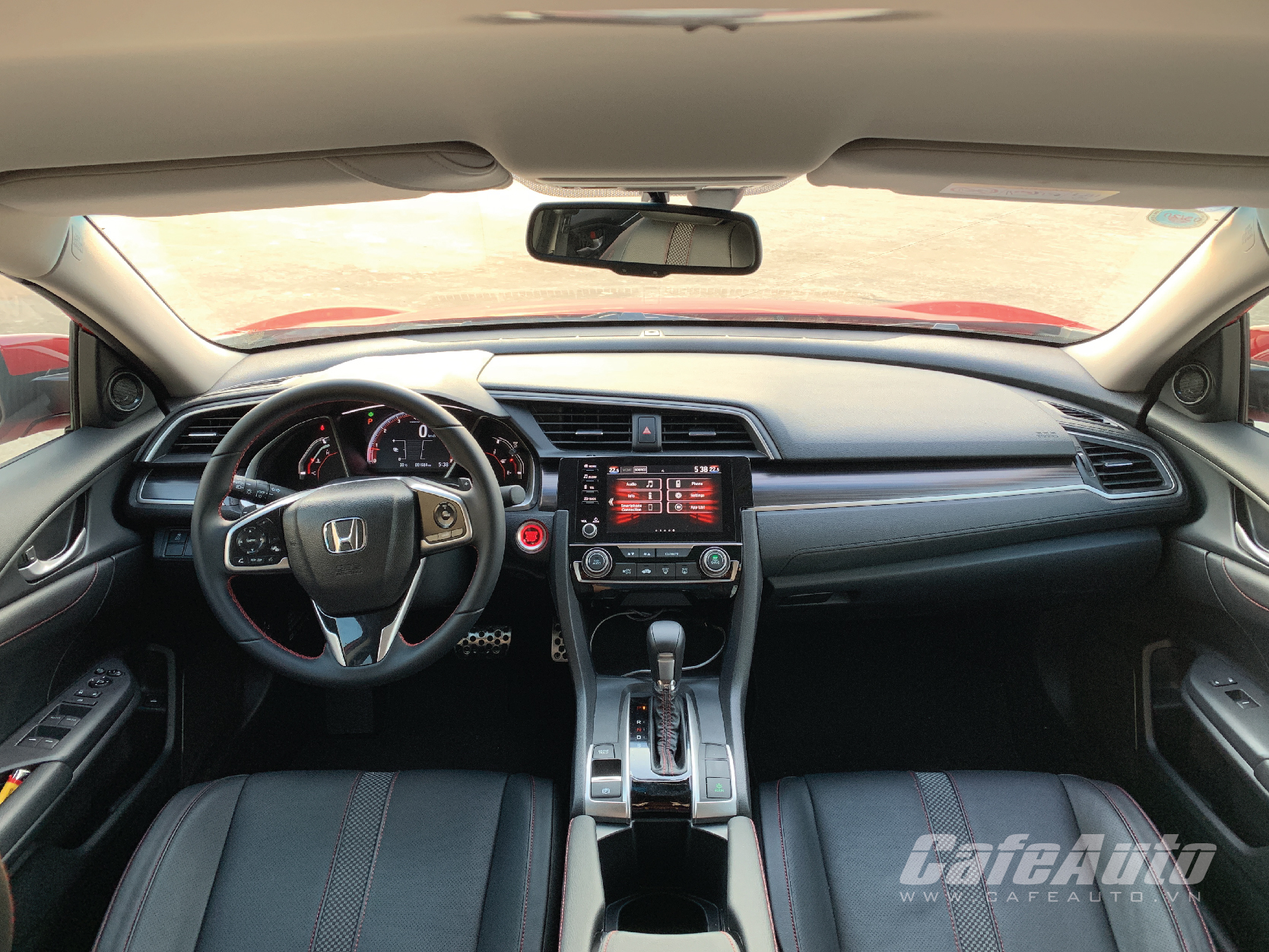 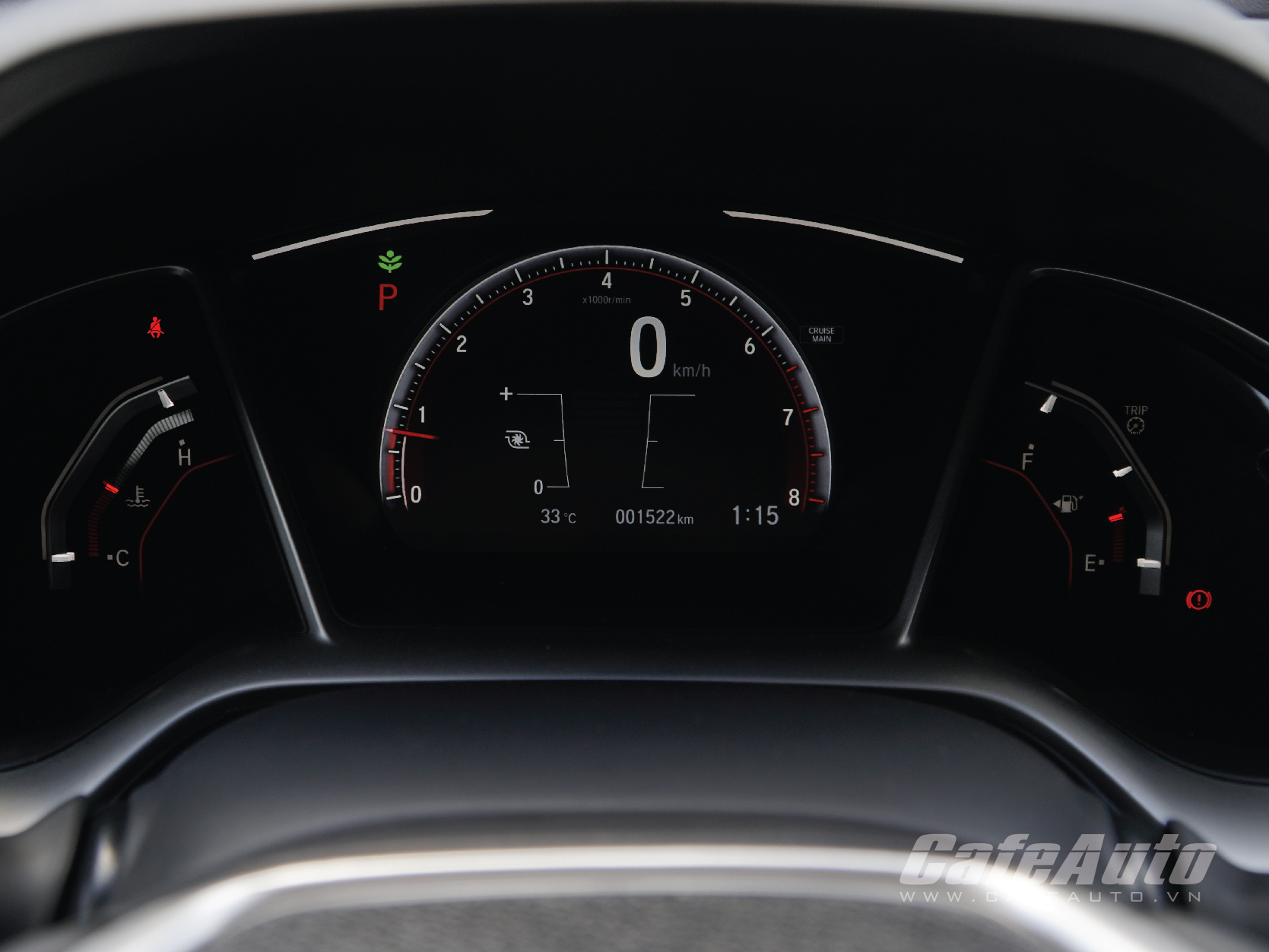 Glancing sideways, the entertainment system is still a 7-inch touch screen with IPS panel ensuring color is difficult to deviate from the TFT screen in the old version. The touch keys are also removed, because it is difficult to adjust exactly as you like. In addition, the air conditioning adjustment system has integrated directly on the entertainment screen to help control faster and more convenient than the old version. At the same time, the car also integrates Apple Carplay for a more delicious experience. 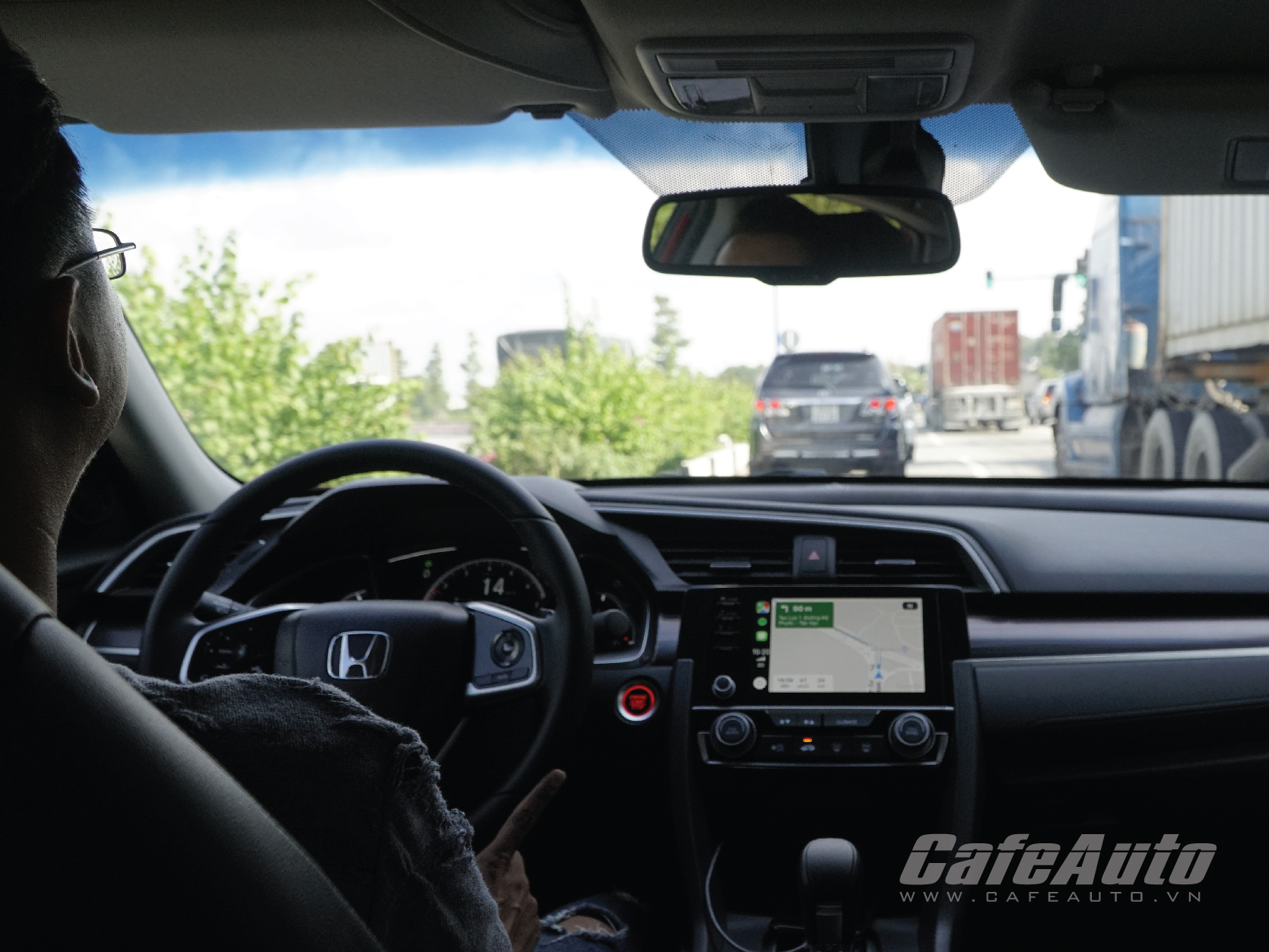 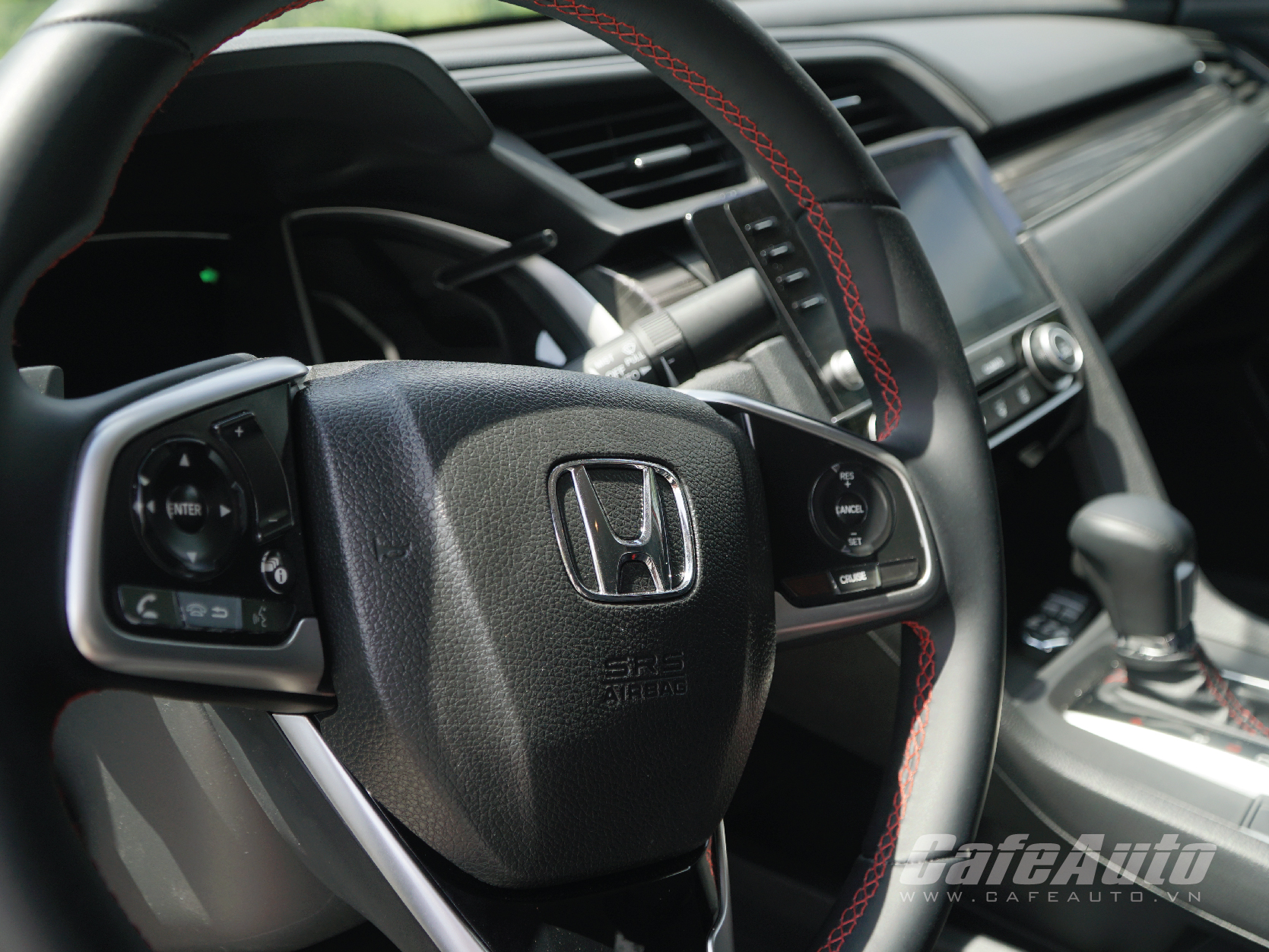 In addition, features like electronic handbrake, automatic brake hold (brakehold), Econ Mode are still the same, but the brakehold feature on this version works seems more delicious, more sensitive than the old model. . The driver is also more leisurely when operating on roads that often encounter red lights. 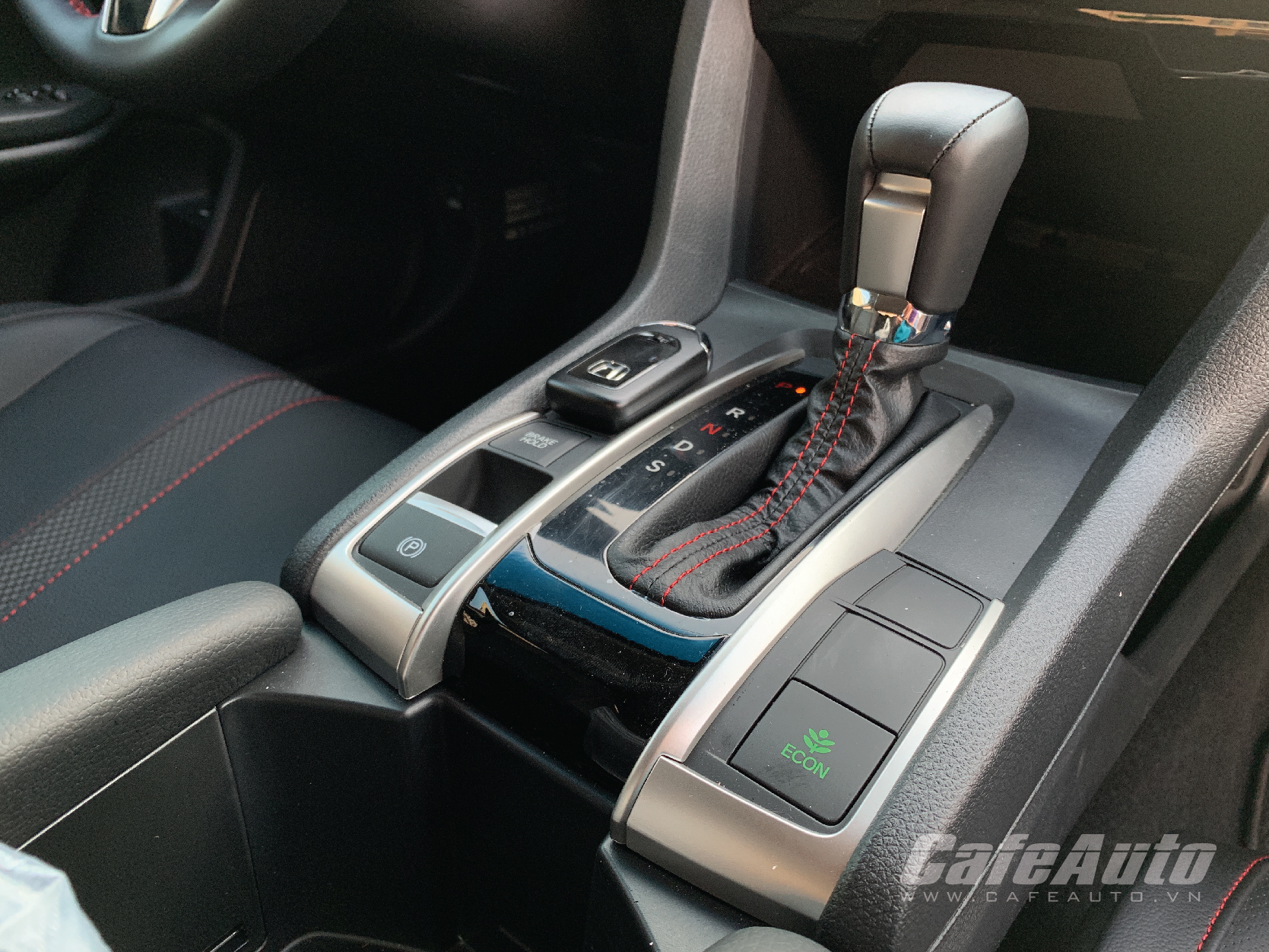 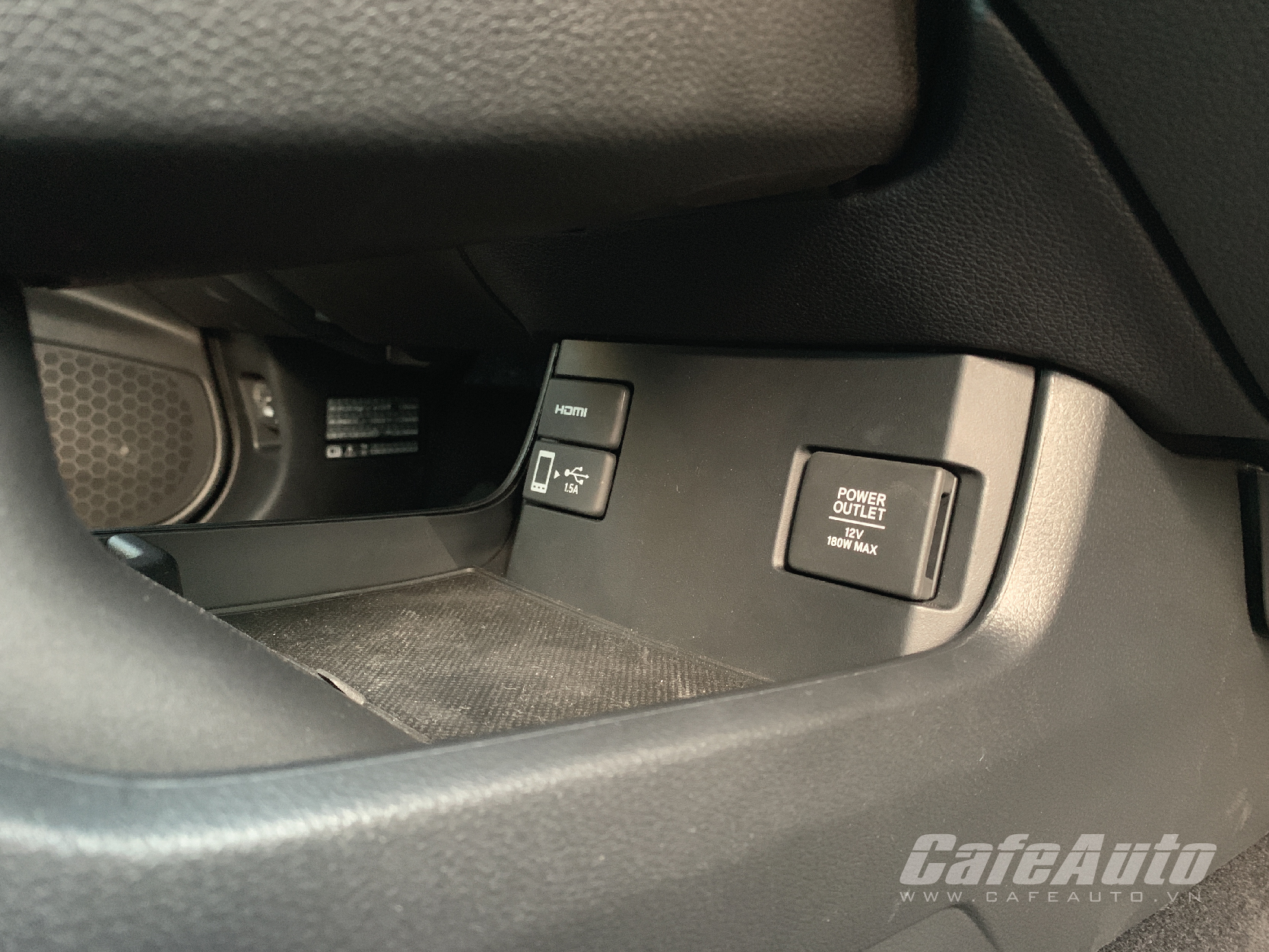 Back to the rear seats, although a bit coupe-oriented, but the ceiling space is still spacious to meet those with a height of about 1m7 – 1m8 and a comfortable footrest is the most characteristic of those Japanese cars. Like the previous model, the luggage compartment is spacious and can be further expanded by lowering the rear seats by 60 – 40. 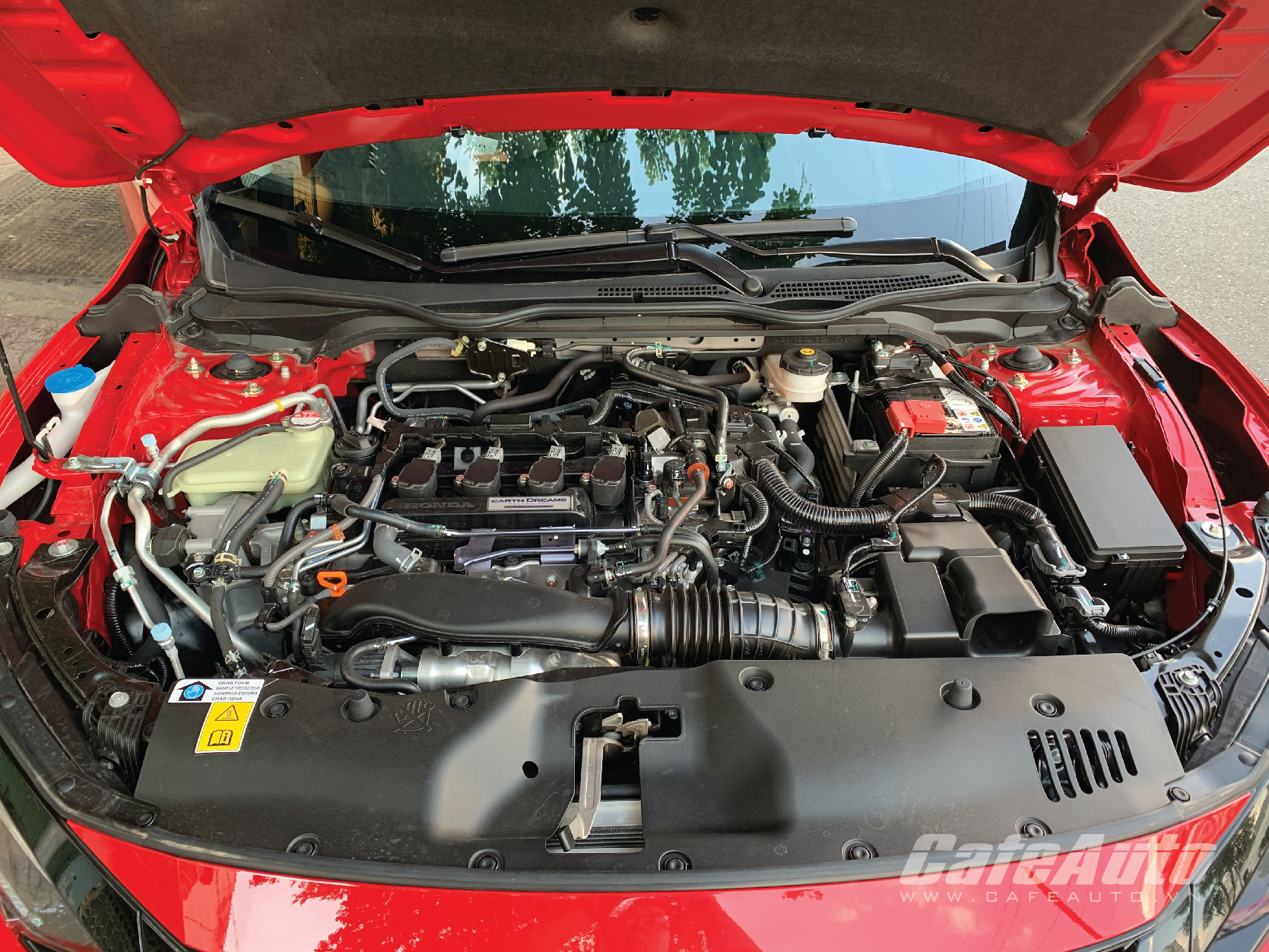 On the road, you can see that, holding a Honda Civic can see the value of this model. Although the RS looks more sporty, the engine is not the medium model in the segment, even more efficient than some D-segment cars. Read the catalog to see the really strong vehicle parameters. such as a 1.5-liter inline 4-cylinder turbo engine, but with a capacity of up to 170 codes with a maximum torque of 220Nm at 1.7-5,500 rpm and CVT gearbox if the calculation is mental, the car takes about 7- In 8 seconds, you can reach the 100km / h mark from a standstill. 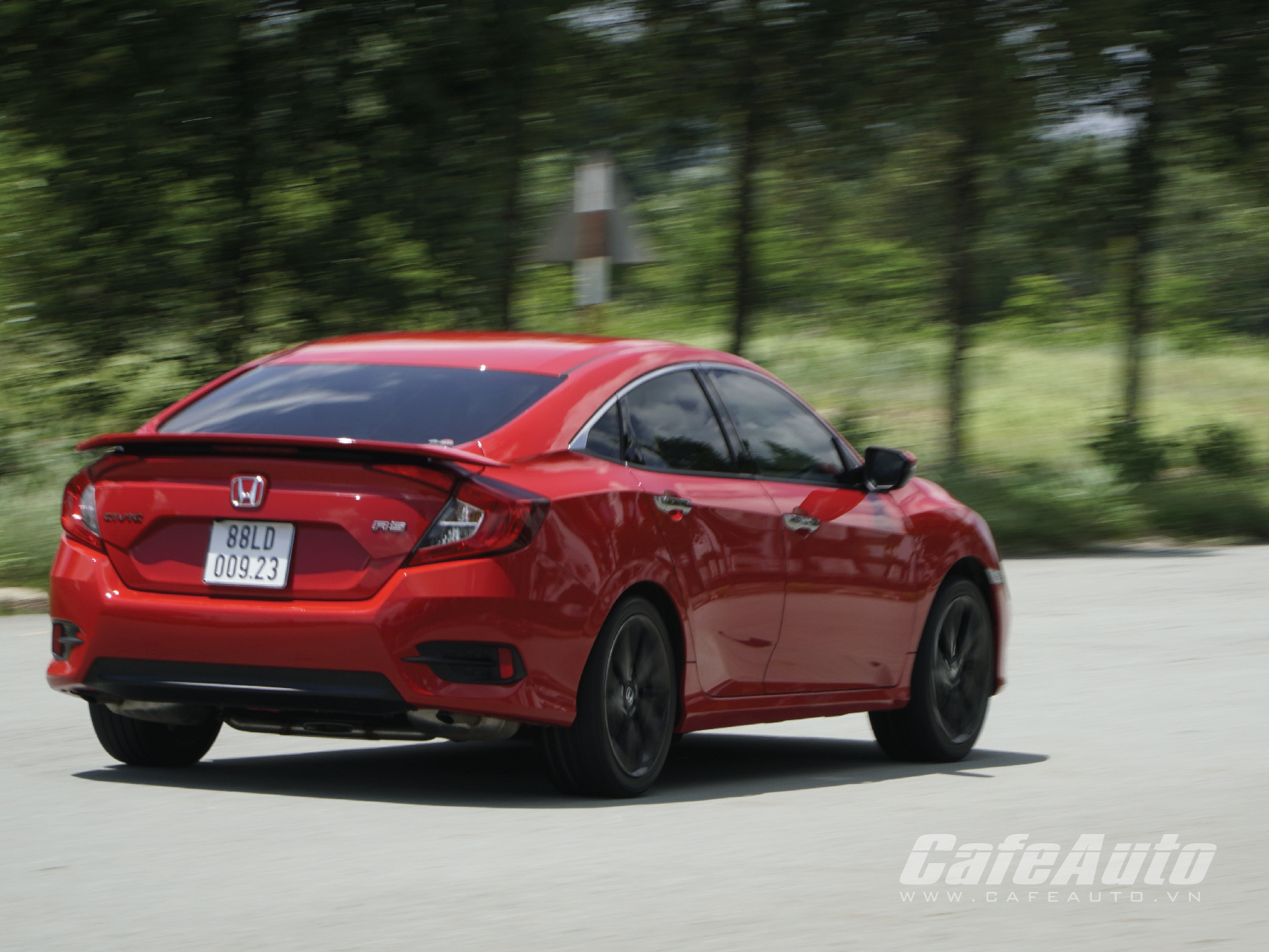 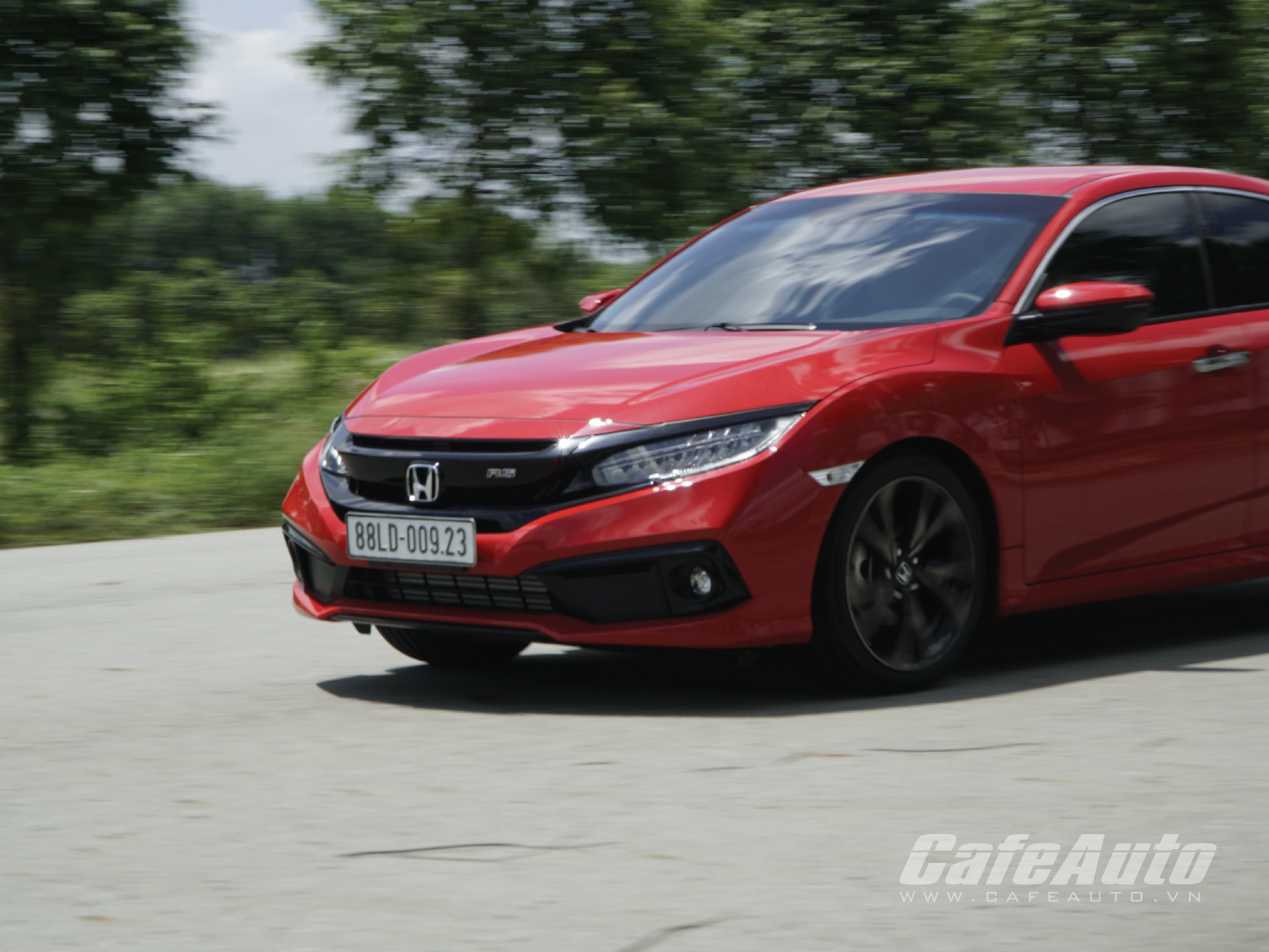 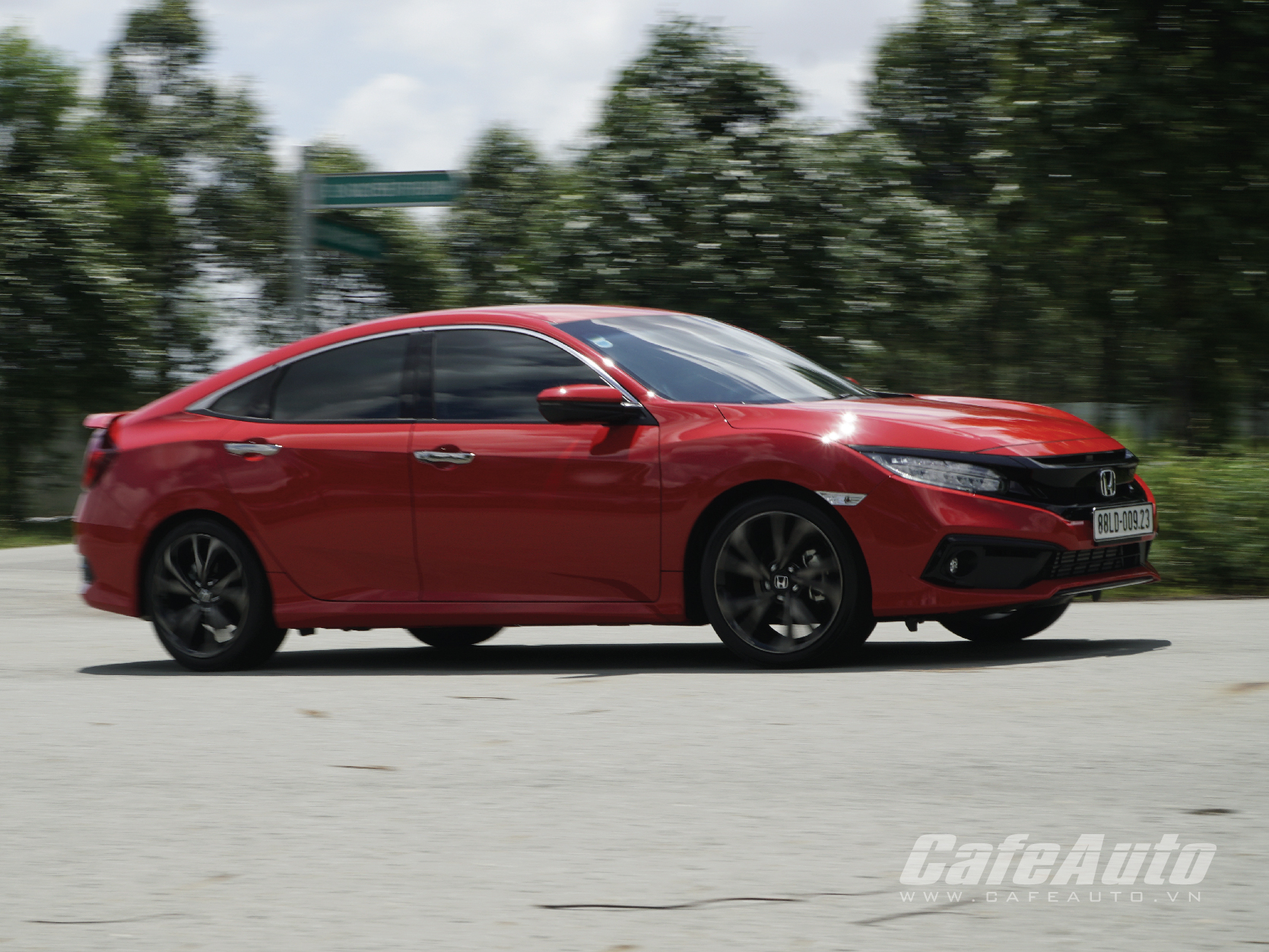 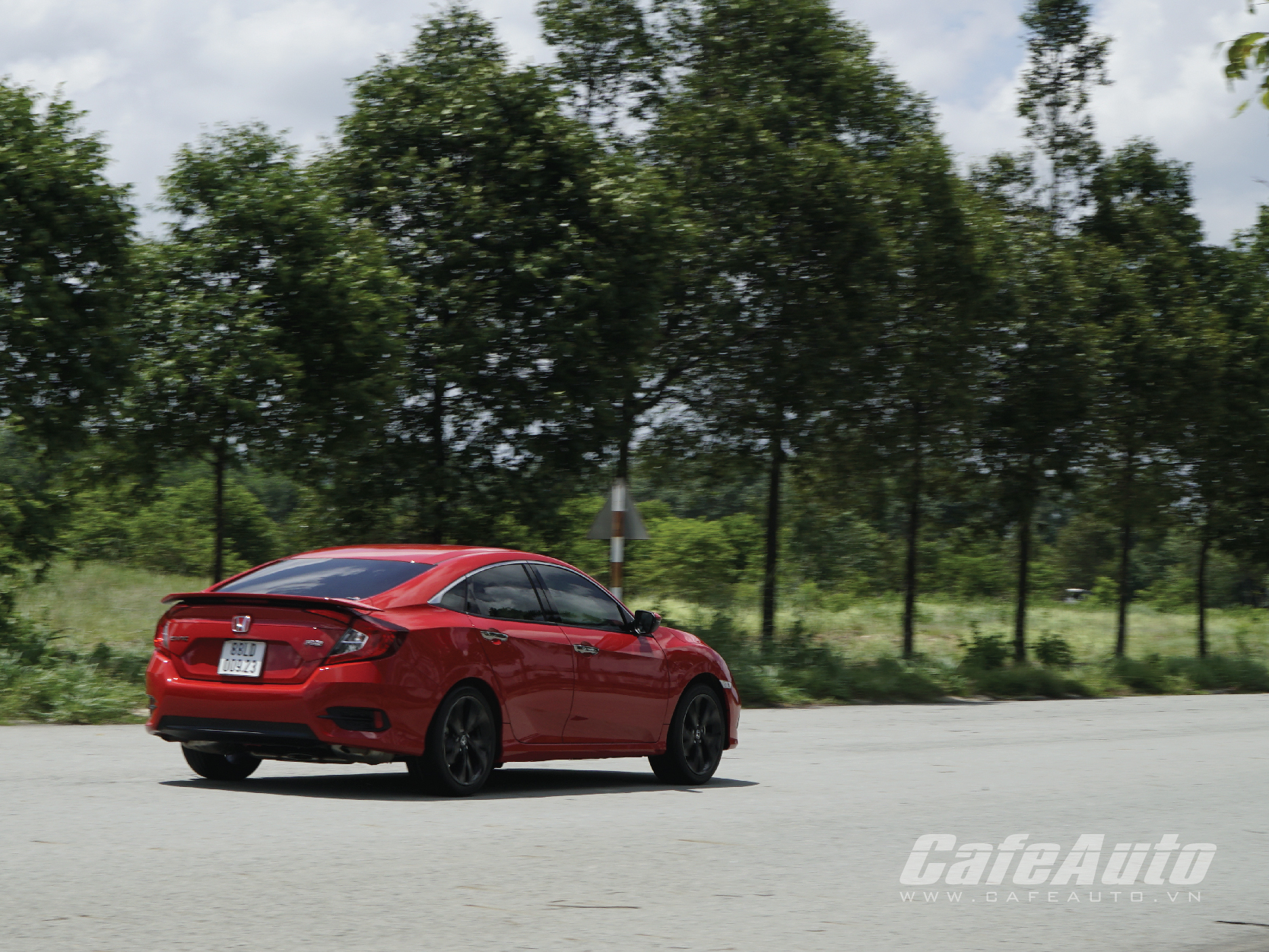 There have been times when the writer was a bit surprised because sometimes the car is too sensitive, to Eco Mode and then up to 90-100km / h or not. This is also the feeling that I myself feel confused when I first drove the previous Civic 1.5L. There is an interesting point that the driver feels interested in driving that is the feeling of “holding” the accelerator pedal when operating without the need for turbo intervention, if gentle, you can bon 120km / h at 2.2-2,300 rpm rpm on the highway for the ability to “drink” gasoline extremely economical. But if you need “violence” to kick the gas pedal a bit, immediately reach the threshold of 2.8-3,000Rpm at this time turbo works, the car is activated instinctively, if not used, you can sweat because feeling of back. However, once familiar with the accelerator, users can see a little “upside down” because the Turbo lag somewhere around less than 1 second after the turbocharger activated. It is acknowledged that the Civic’s steering wheel is extremely flexible due to the small number of revolutions, so every little rotation makes the car change direction, so that the driver can leisurely and comfortable. , more interesting in each continuous cornering, inspire more driving by the level of cylinder, body feedback on the steering wheel. 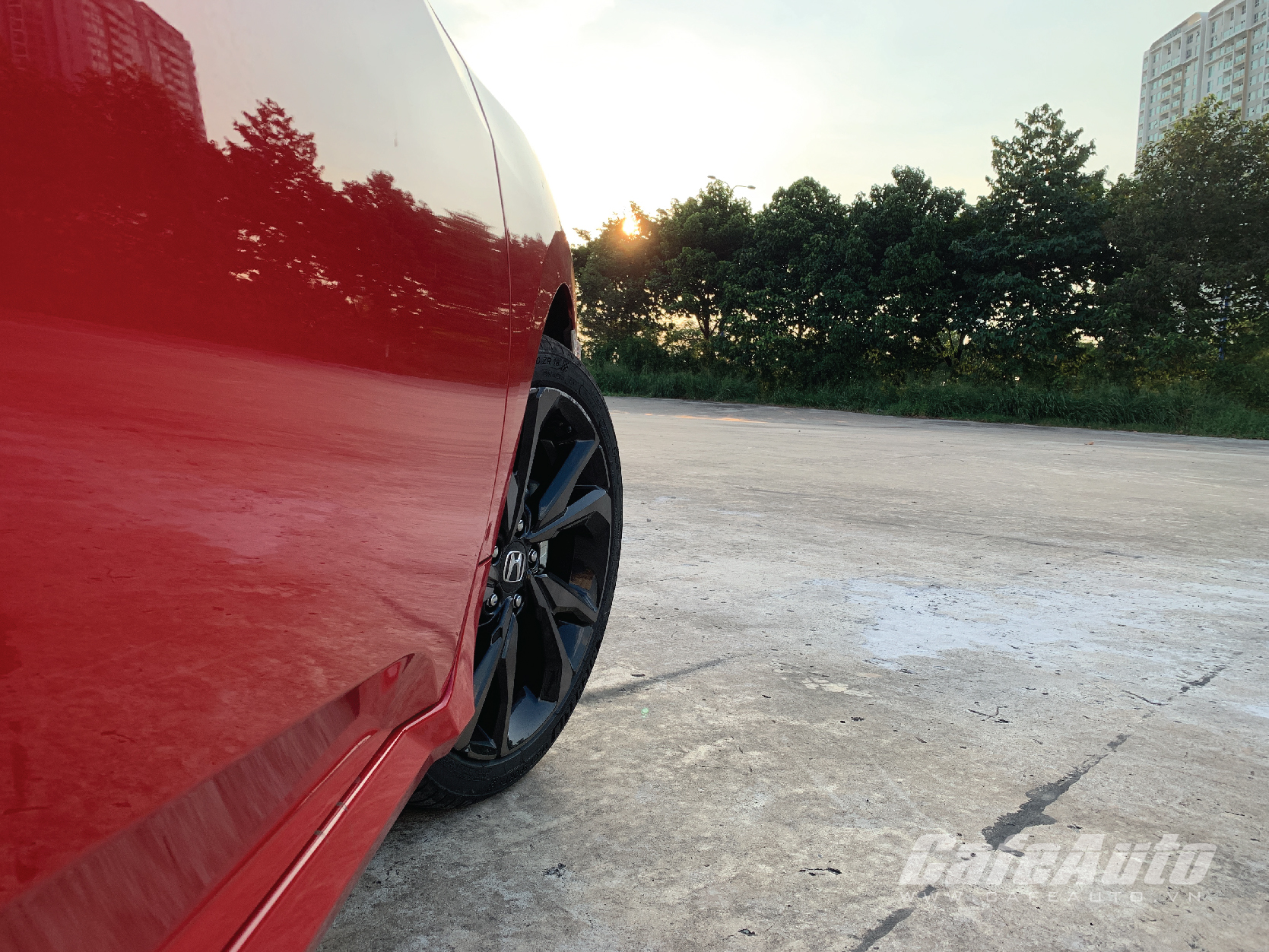 Although using CVT transmission technology, Earth Dreams Tecnology, but if you like the sporty feeling of “pressing the gas, squeezing the gear” or holding the engine down the hill, Honda is still satisfied by the two gearshift levers provided by the steering wheel. 7 level of virtual and if switched to S (sport) mode is no different from semi-automatic cars at all. 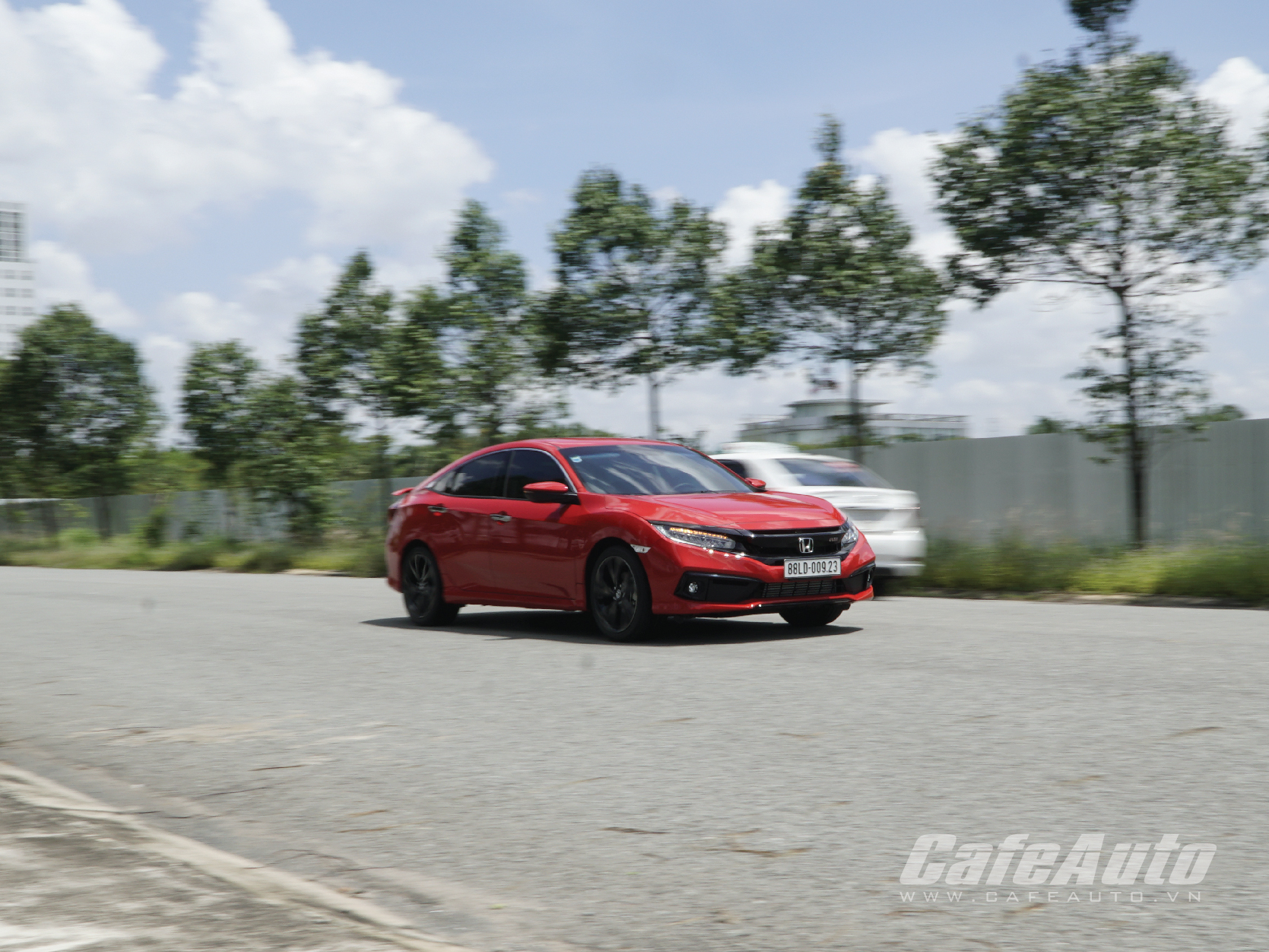 No model is perfect, especially sports models such as the Rs Civic, so the rear passengers can still hear the noise from the Michelin Pilot Sport tires especially when traveling on the roads. Bad with high roughness. However, it is still possible to overcome by the 8-speaker sound system for extremely good bass through hits such as “Give it to me” or gently melodious through ballads of My Tam, Noo Phuoc Thinh. 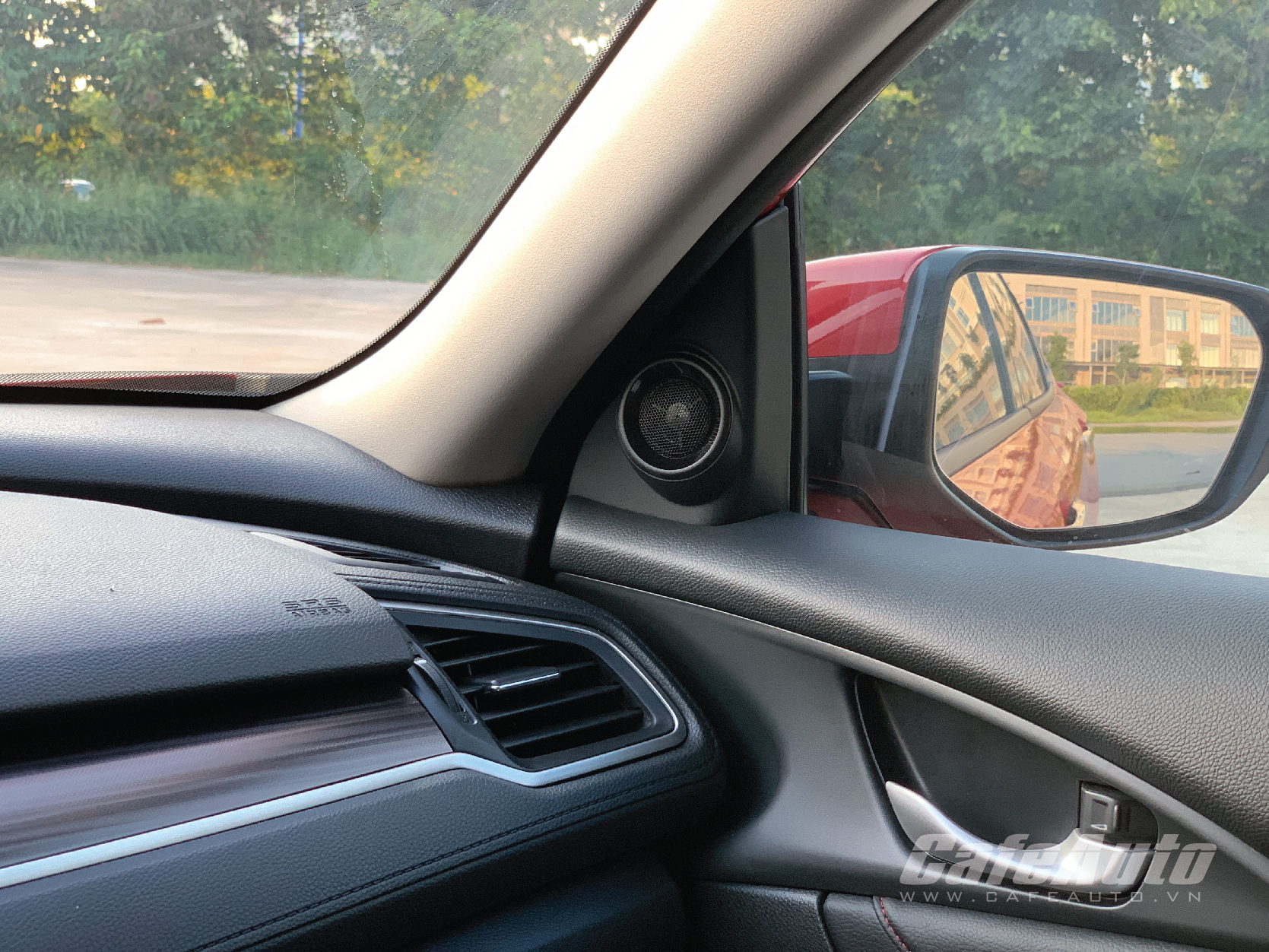 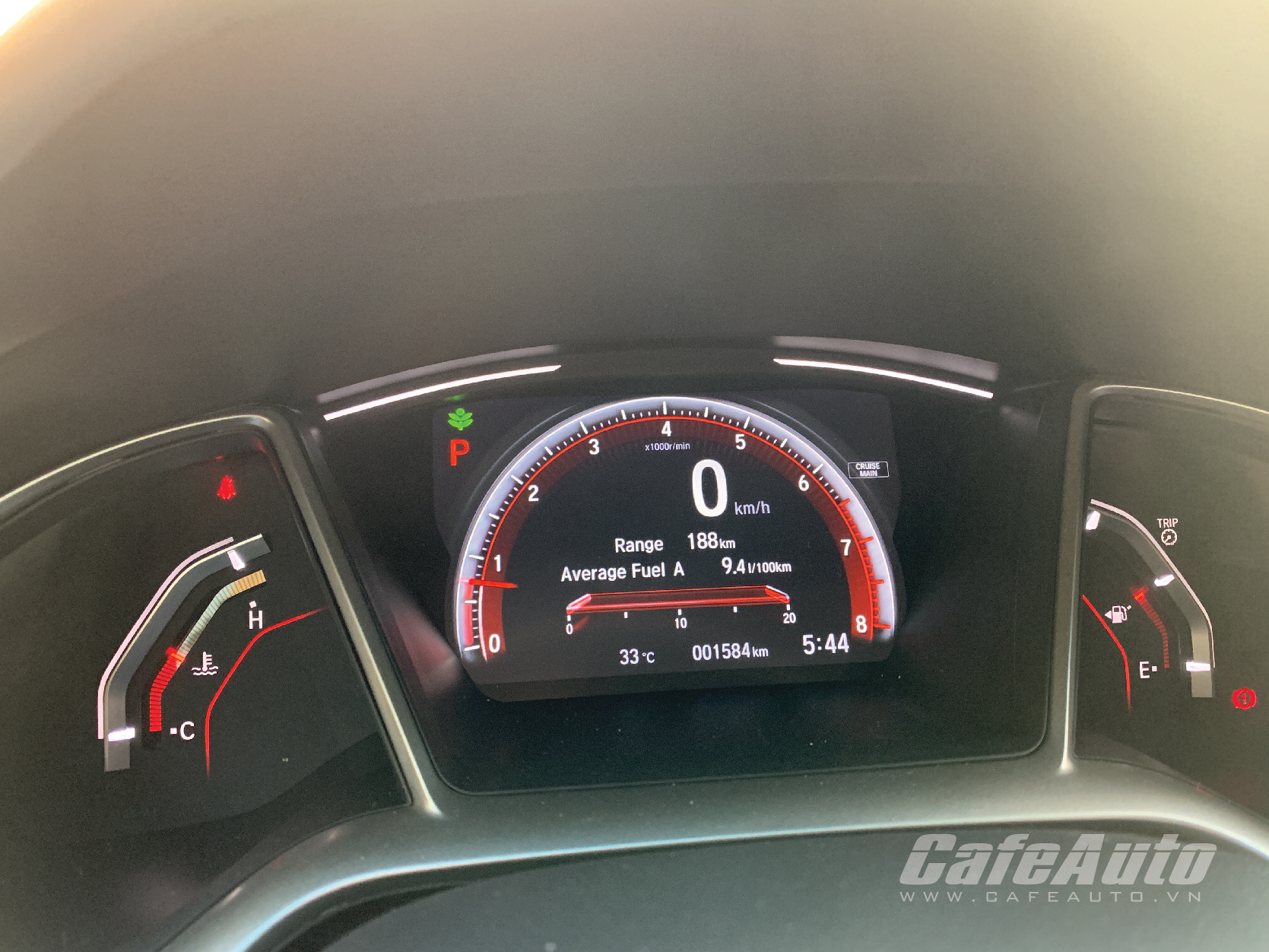 Bargains in the segment

As for the ‘eating and drinking’ part of the Civic RS, the driver can boldly assert, just run at ease. During the journey from Saigon – Vung Tau – Binh Duong the car costs about 9.4L for 100km with no gentle way of running, because the driver wants to bring the car up to the last limit that the car can reach. be straight through the straight line or enjoy the sound quality of the car when “crawling” through Kenh Te Bridge District 7. If softer for daily use, the car will only average 7L for 100km. In short, the Honda Civic RS is a bargain in the 1-wheel-drive segment. Wait, hurry, expensive, test drive, experience to see what Civic brings to the driver. Expensive but chopped pieces. 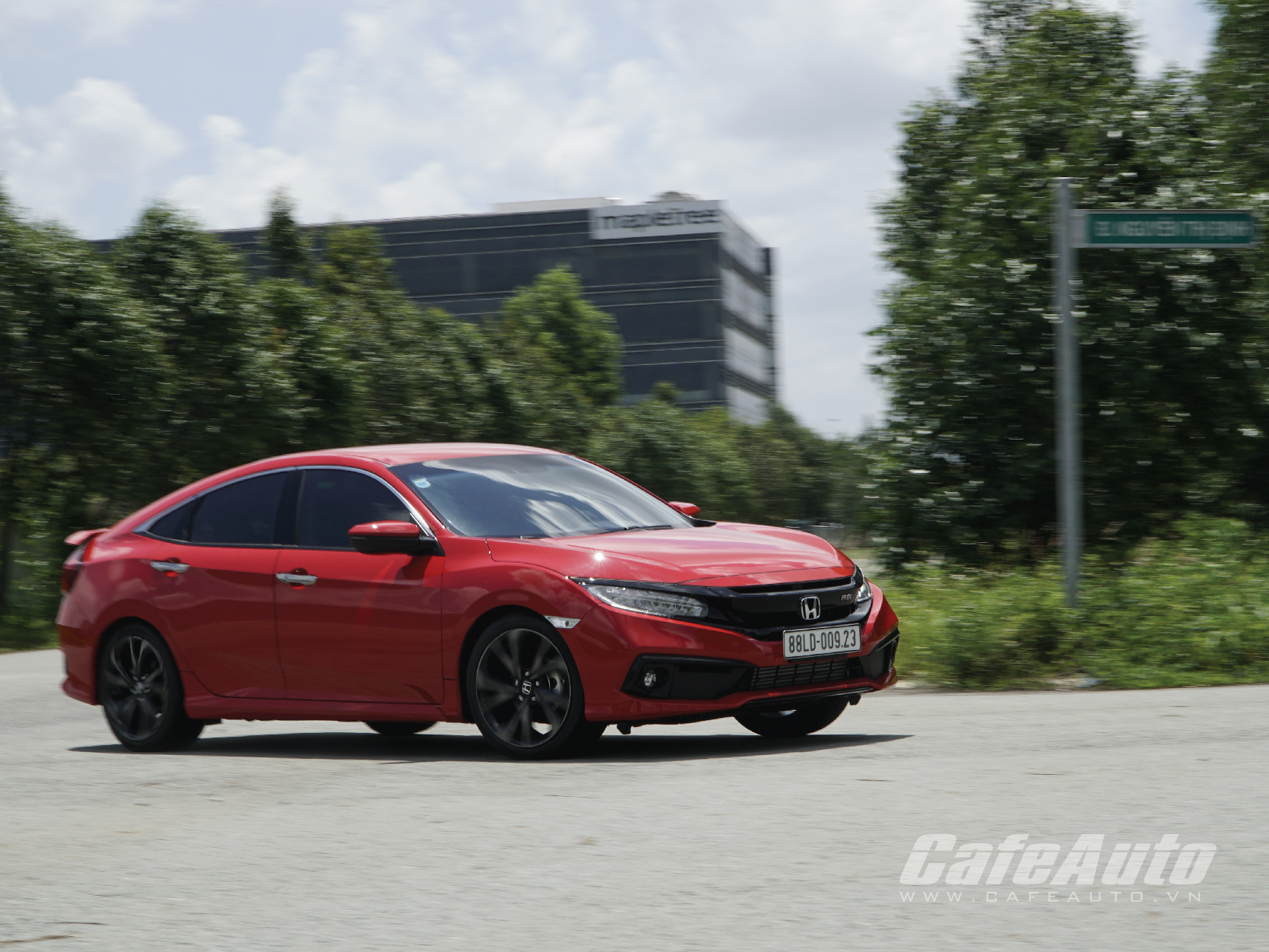 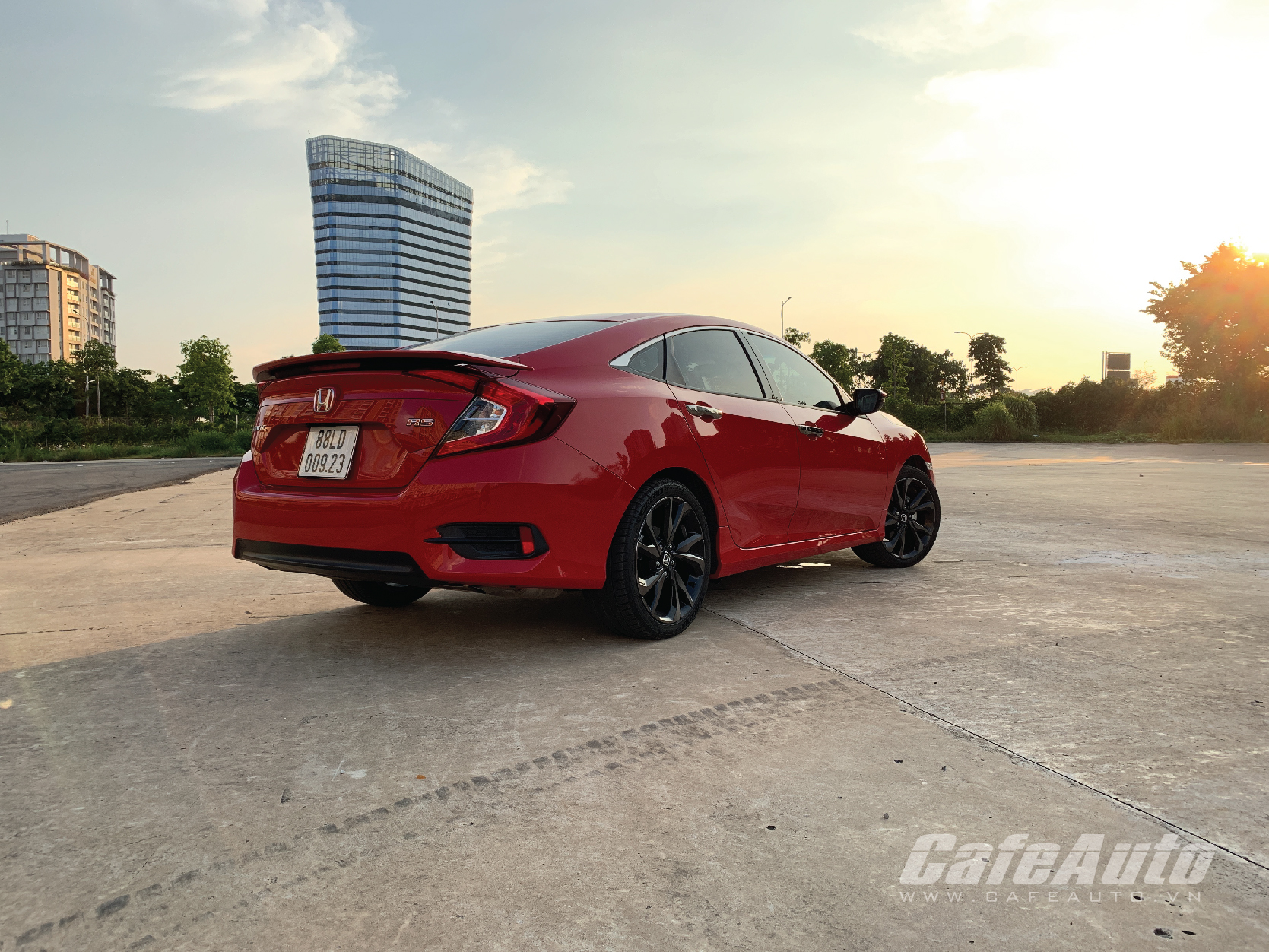 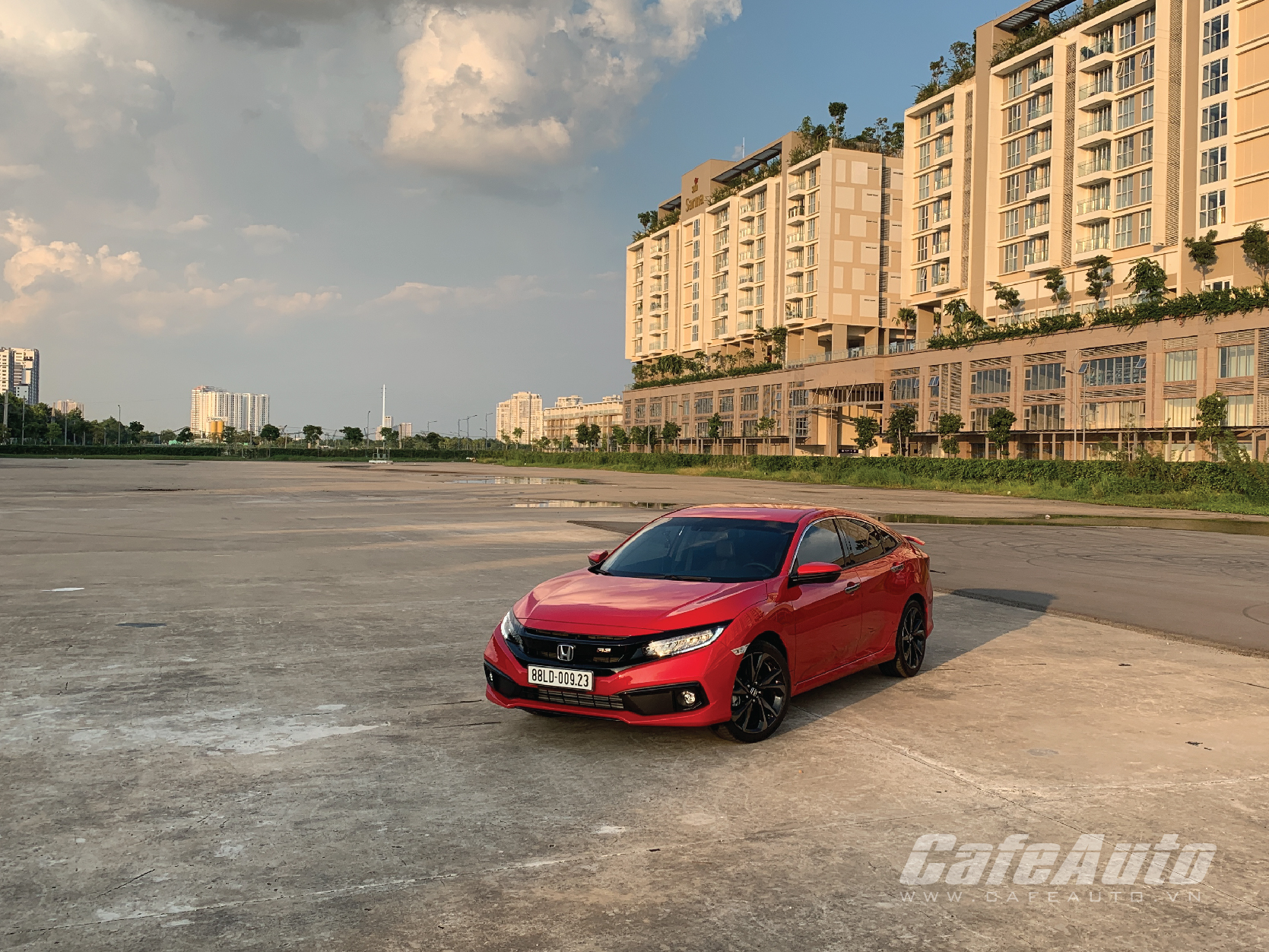