Moto G9 Plus This is an upgraded version of almost every aspect of the two previous models, the G7 and G8. G9 Plus is equipped with a new generation and high performance chip, which is Snapdragon 730G. The device also owns a higher battery capacity, with the internal memory capacity pushed to 128GB and equipped with a fast charging feature with a capacity of 30W.

However, as usual, Motorola encountered fierce competition from the product lines of Xiaomi and Realme. Will the upgrade points of Moto G9 Plus compared to the original version help the model compete on par with competitors in the same segment? The answer will be in today’s article. 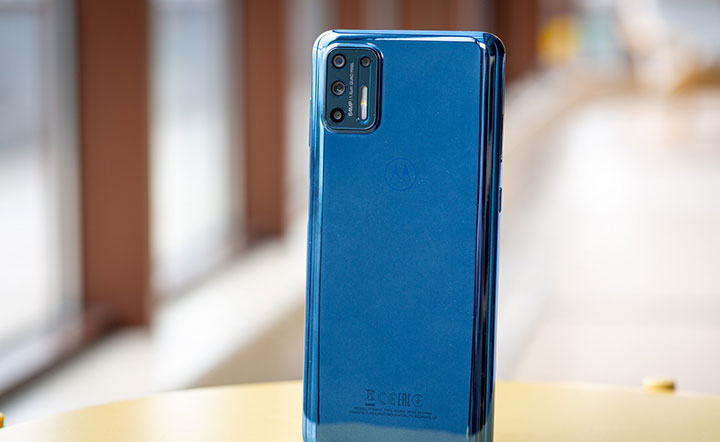 Similar to the majority of 6.8-inch screen phones on the market, the Moto G9 Plus is a large overall model. The device’s curved bezel may make a little difference in the grip experience, but the device’s thick bezel and overall weight of up to 223g can make your hand tired during long-term use.

What we like about the Moto G9 Plus is its synchronous design. Specifically, the back of the machine seamlessly bends to the border, forming a unified whole, eliminating the gap at the connection point between the two parts.

The design of the camera cluster has been significantly changed compared to the previous version. The camera cluster in this version has a rectangular design, with 4 lenses placed neatly inside. This camera cluster is not too thick, so you can put the phone on the table without being channeled.

Moto G9 Plus is released with 2 color versions, including “Rose Gold” (Gold) and “Indigo Blue” (Blue). The version that we used in the review is finished with the main color is blue. The back of the device is simply designed, with a glossy finish that looks like a mirror. Although it has an eye-catching appearance, this type of finishing will cause the back of the device to stick to many fingerprints during use.

The device’s headphone jack is located on the top edge, while the bottom edge is equipped with a USB Type-C connector and a single speaker strip. Overall, the Moto G9 Plus is a phone with a high build quality and finish. 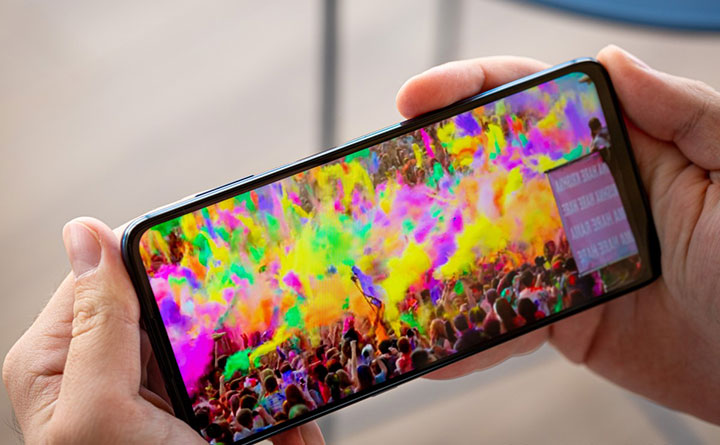 This year’s Moto Plus version has been slightly increased in size, with the screen measuring up to 6.8 inches diagonal. The screen uses IPS LCD panel type, is divided into 20: 9 aspect ratio and has a resolution of 2400 x 1080 pixels.

Located in the left corner of the screen is a small hole to make space for the selfie camera. This is a type of LCD panel with not too high quality, so on the screen there will be halos on the bottom bezel area and around the camera hole.

In our test, the screen has a maximum brightness level of 427 nit when adjusted manually. When switching to Auto Brightness mode, the screen brightness level can reach a maximum of 522 nits. This is not the most impressive result in the segment, but it is still just enough to provide a good visual experience for users.

Color accuracy displayed when used in the Default mode is within an acceptable range (with an average dE2000 index of 5.0). However, the 2 tones of white and gray have a slight blue tint when used in this mode. Switching to the Natural color display mode brings the dE2000 chromatic aberration index down to 2.3.

Powered by a battery with a capacity of 5000 mAh, the Moto G9 Plus gives us a long battery life. In the endurance test, the machine achieved an impressive result of 136 hours.

The machine has good results in both on and off screen test conditions. Overall, the Moto G9 Plus has an impressive battery life, giving you peace of mind during daily use.

Moto G9 Plus comes with a 30W fast charger, which the company named TurboPower. During testing, the G9 Plus was able to recharge to 54% of its battery life after just 30 minutes of charging. To fully charge from 0%, the device only takes about 1 hour and 15 minutes. 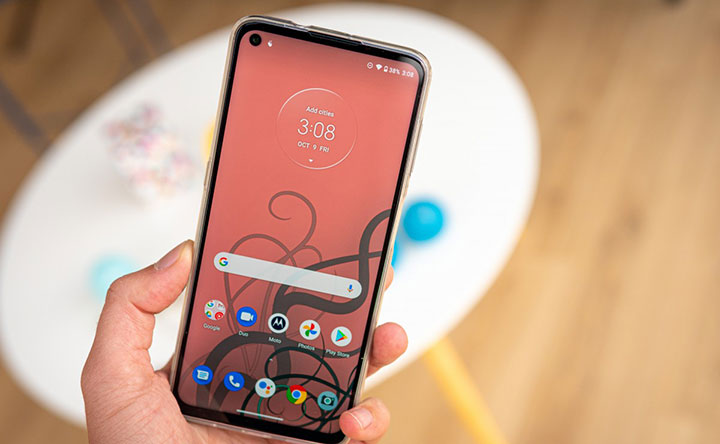 Although Motorola continues to use the old generation chip, this time, the Snapdragon 730G is a chip with strong performance compared to the price segment. The chip is manufactured based on the 8nm process, made up of 8 processor cores including 2 Kryo 470 Gold cores (2.2GHz) and 6 Kryo 470 Silver cores (1.9GHz). In terms of graphics, the chip is integrated with Adreno 618 GPU. G9 Plus is released with a single version of RAM and internal memory, namely 4GB + 128GB.

Using Geekbench 5.1 to score overall performance, the G9 Plus’s Snapdragon 730G chip achieved single and multi-core performance scores of 525 and 1695 points, respectively. This is a very good result, and can compete with other models in the same price segment.

In actual use, the G9 Plus offers a smooth user experience, with all applications having fast opening and closing times, with little lag. 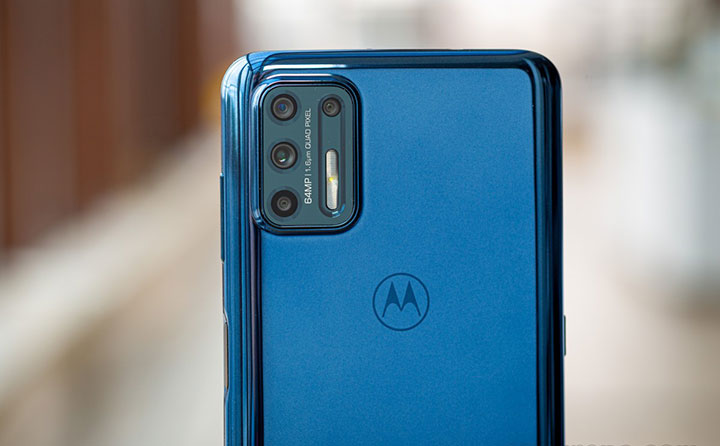 Motorola has chosen a different direction for this year’s version of the device by removing the super wide-angle camera from last year’s G8 Plus version and replacing it with a lens capable of capturing still images. The new camera has 8MP resolution, f/2.2 aperture with a sensor that has a physical size of 1/4.0 inch and has a pixel size of 1.12µm.

The configuration of the main camera has been upgraded, now using a 64MP sensor with a pixel size of 0.8µm and a physical size of 1/1.73 inch. The sensor is placed behind a lens with an aperture of f/1.8.

The remaining 2 lenses of the rear camera cluster have 2MP resolution – with one of them used to collect depth information of the scene, while the other is responsible for taking macro photos with an aperture of f. /2.2 and autofocus is supported.

When used in daylight conditions, the Moto G9 Plus delivers slightly above-average photo quality, with sharpness and detail of the scene being the two strongest points in each image. In addition, the colors of each picture are presented in a vivid and vibrant way. 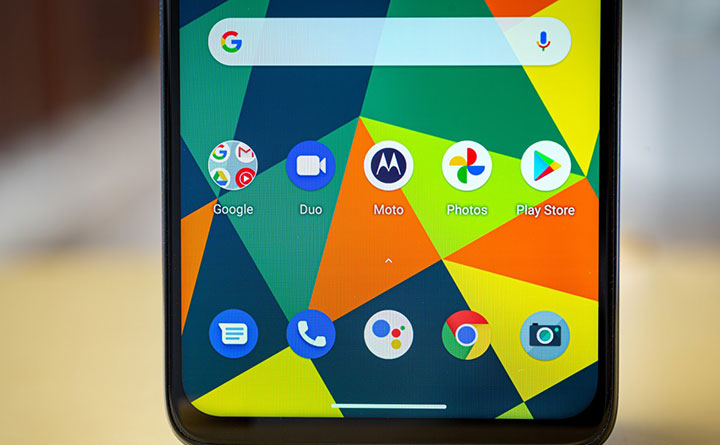 Sold in the mid-range segment, Moto G9 Plus gives users a high level of use value for money. The strengths of the device include a large screen, a main camera capable of taking beautiful pictures and the Snapdragon 730G chip that delivers a level of speed performance.

In addition, with a large battery, you can comfortably use the device for a long time without having to worry much. Moto G9 Plus is a good choice if you are looking to buy a quality phone in the mid-range price segment.