With the Xe architecture HD graphics, Intel’s new generation of thin and light graphics cards on this platform can no longer be underestimated. In this article, the author will have a core showdown between Intel H35 mobile processor and AMD Ryzen 5000 mobile processor in the future to see how much Intel Xe architecture core graphics card has achieved in terms of productivity and gaming. Strong level. 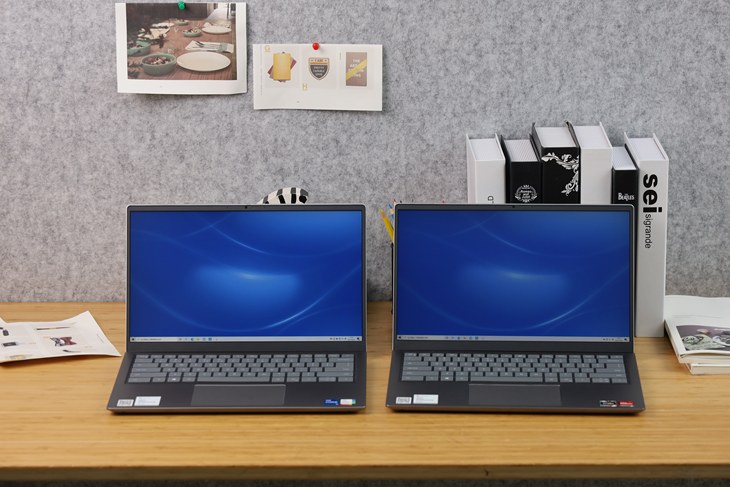 It should be noted that there is a major difficulty in the performance showdown of the notebook platform, that is, the comparison models are very difficult to find. Fortunately, Dell launched the Inspiron 14-5410 and Inspiron 14-5415 two thin and light notebooks this year, giving the author the opportunity to show off the Intel H35 mobile processor and AMD Ryzen 5000 mobile processor. 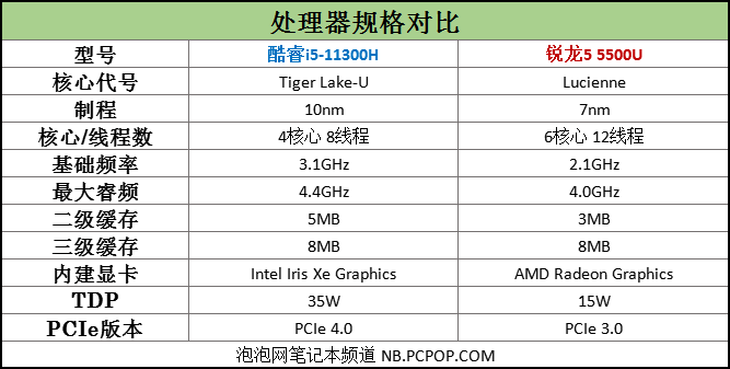 From the above notebook configuration list, it can be seen intuitively that the two thin and light notebooks are roughly the same except for the processor and the processor’s built-in graphics card. 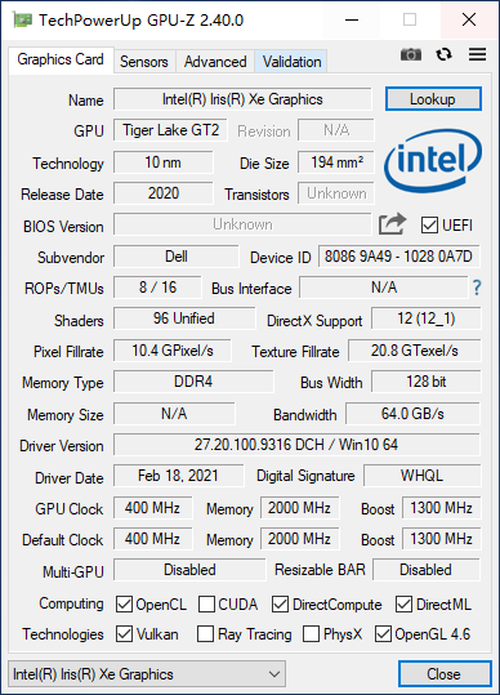 The Core i5-11300H mobile processor has built-in Intel Iris Xe Graphics. The graphics card is based on Intel’s latest Xe architecture design and has 96 sets of EU units. 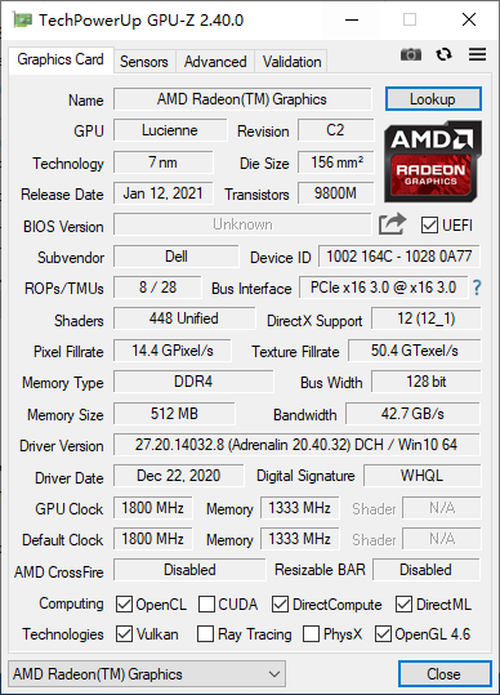 Note: In this performance comparison test, the two notebooks are both conducted under the power-on state in order to give full play to their strongest performance. 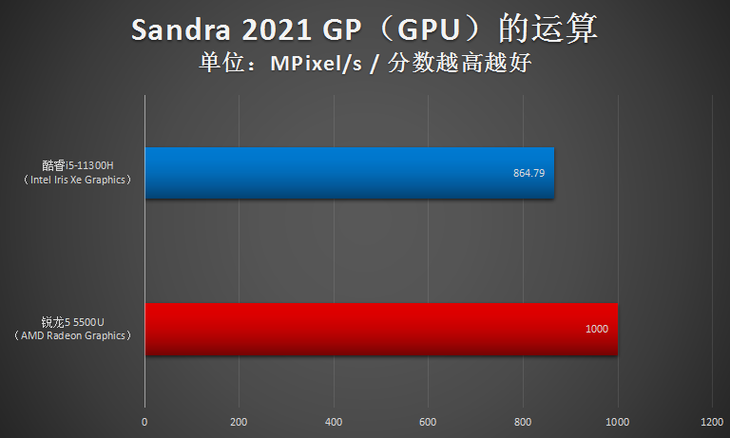 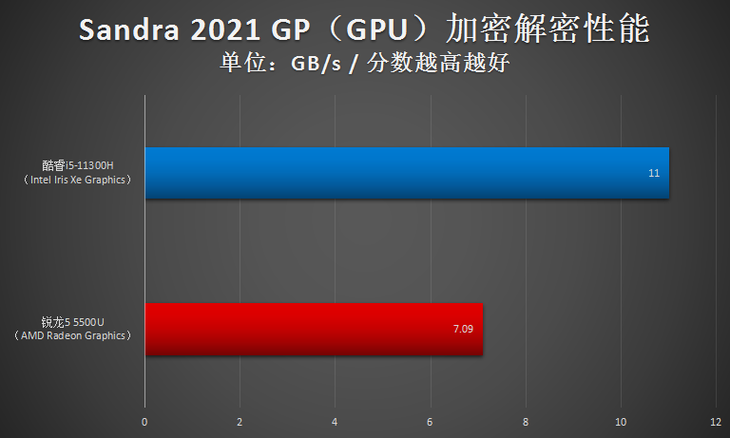 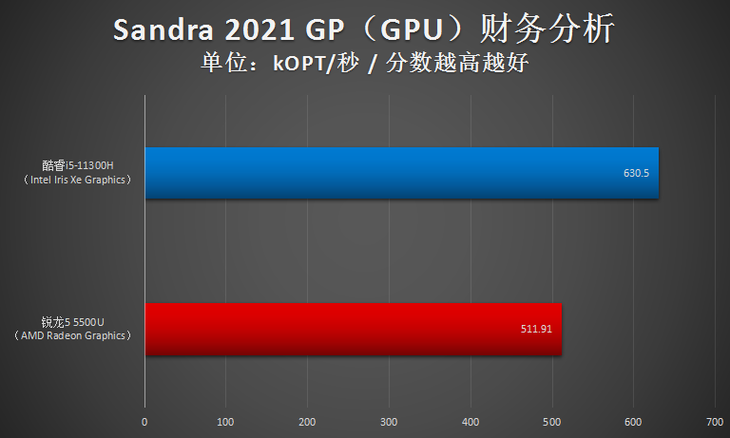 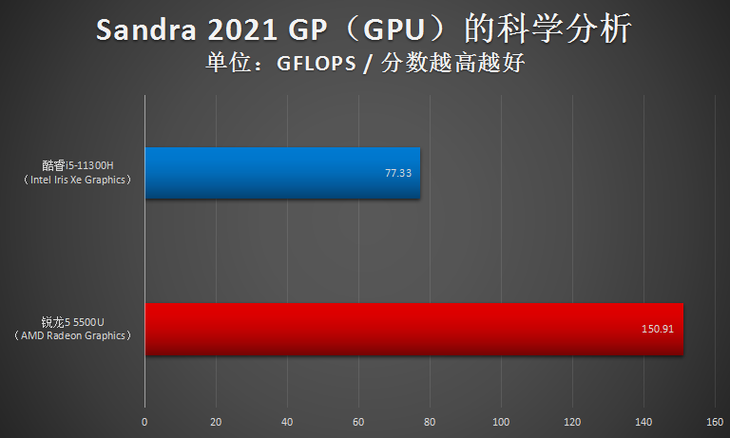 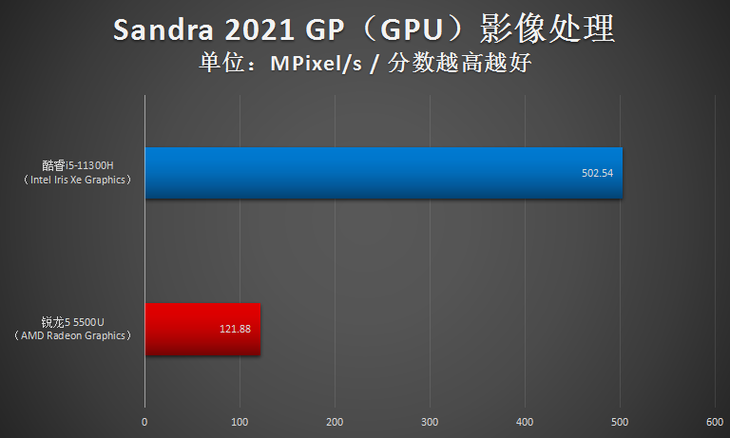 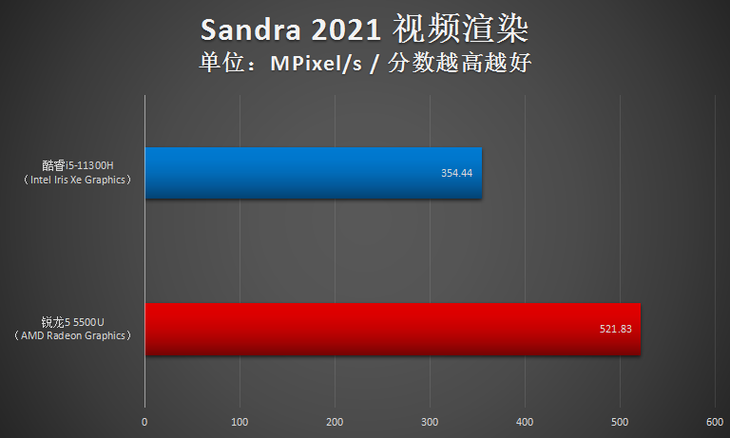 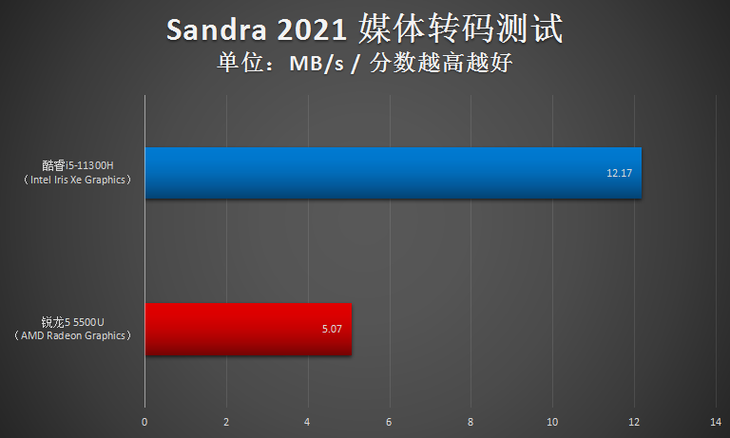 Test summary: In this test, the core display performance of Core i5-11300H is superior in most projects. On the other hand, AMD Radeon Graphics, the graphics card is an old architecture after all, when faced with Intel’s new core display, the performance is indeed somewhat lagging.

The author’s test method this time is to export a video with 480p quality, 30 frames per second frame rate, and a length of 3 minutes and 45 seconds. 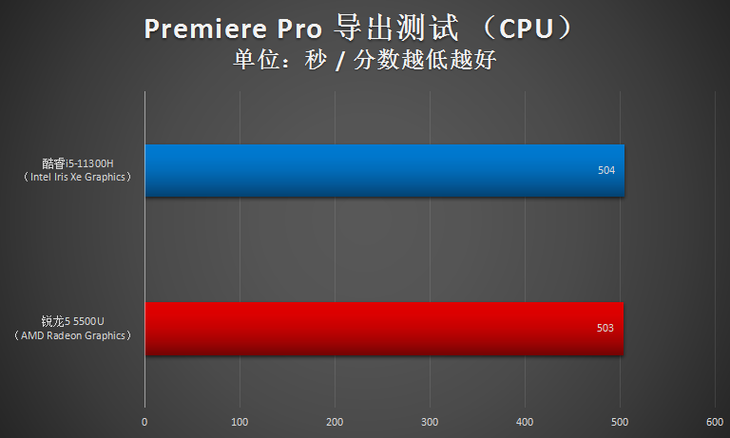 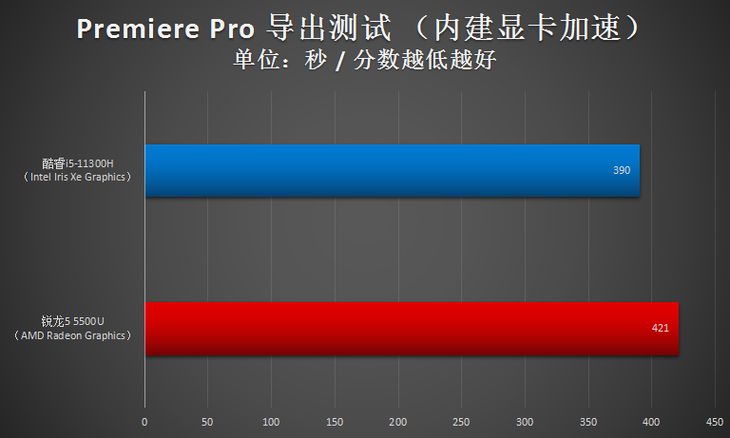 Test summary: In the pure CPU computing state, the performance difference between Core i5-11300H and Ryzen 5 5500U is only one second, and the performance is almost the same.

But after turning on the built-in graphics acceleration, the advantage of the Intel Core i5-11300H became apparent, and the result was significantly ahead of AMD. It has to be said that in the link of Adobe Premiere Pro video export, Intel Iris Xe Graphics has a better acceleration effect than AMD Radeon Graphics.

When people perform Premiere export operations, they basically turn on the built-in graphics acceleration, so in this test, the Intel Core i5-11300H is undoubtedly the better one.

It is also very common for users to play games and relax after a busy office. Next, the author chose the 3DMark benchmark test, as well as two of the author’s favorite games “League of Legends” and “Sniper Elite V2 Remake” to start the game performance test of the verification showdown. 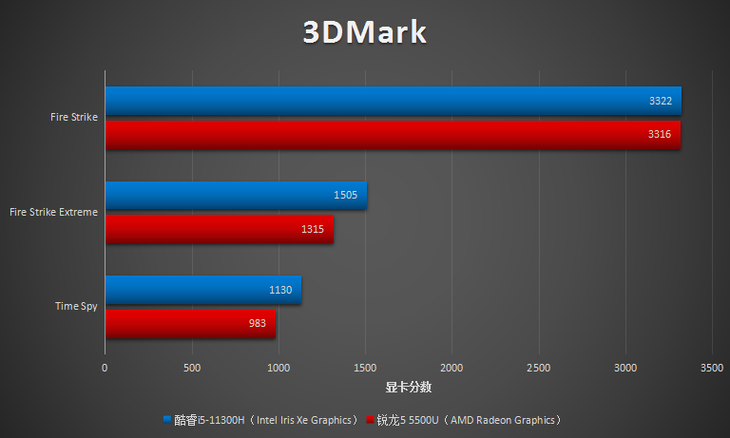 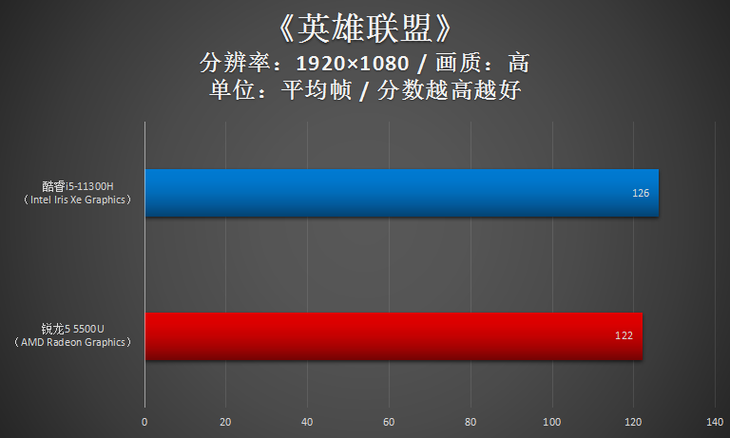 “Sniper Elite V2 Remake” is a shooting game developed and published by Rebellion. In the game, players will play the elite sniper Karl Fairborn to prevent the Nazi V2 rocket technology from falling into the hands of the Soviet Red Army. Players must help important scientists who are eager to defect to the United States and eliminate those who stand in the way. Players need to be very patient between the two armies, using wisdom to complete tasks. 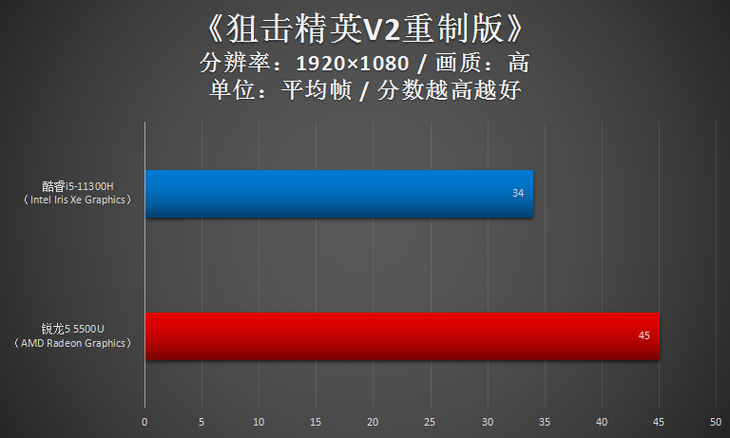 In the past, AMD’s built-in graphics card has always been a leader in thin and light notebook platforms. But now the situation has changed. With the debut of Intel’s Xe architecture core graphics, AMD’s traditional advantages have disappeared. Take the Core i5-11300H core display vs. Ryzen 5 5500U for example, Intel has the advantage in productivity performance, and the game performance is the same on both sides. It is already obvious who is better!

After talking about the core display performance, I will finally talk about the Core i5-11300H mobile processor itself. Even though it only has a 4-core and 8-thread design, it can be seen from the comparative test of “i5-11300H shines with a 5,000-priced thin and light Ryzen 5 that is not an opponent!” The productivity performance of the Core i5-11300H is also better than that of Ryzen 5. 5500U.