I’ve noted on more than one occasion that some anime are like classical tragedies.  You know what the end is going to be, so the dramatic tension doesn’t come from suspense – it comes from the knowledge itself, and watching the journey play out.  Hyouge Mono is like that in a very literal sense – fiction or no this is history we’re watching here, so we know that certain checkpoints are going to be reached.  Whether one counts it as a tragedy or not is another matter – none of these men were angels, and the Sengoku Period had few biographies with happy endings.  But this series certainly has a way of making what’s coming feel very tragic. 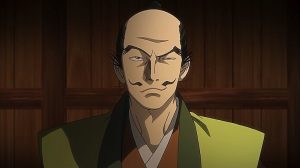 First off is the matter of Date Masamune, whose ass Sasuke has been implored to save.  As different as they are, these two are a sort of Yin and Yang of Sengoku eccentricity – oddly enough they’re quite compatible.  Sasuke’s solution – since Date has already used the burial attire trick once – it to have Date parade through the streets of Kyoto carrying a golden crucifix (the implication being just as he wore the clothes he expected to be buried in last time, he carries the cross he expects to be crucified on this time).  That actually did happen – the tea ceremony in the street is a bit of creative license as far as I know. 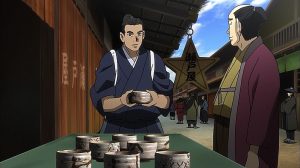 Date is a veritable cat of nine lives, that’s for certain.  Who’s to say why it really happened, but he did manage to survive two transgressions which Hideyoshi easily could have killed him over, so perhaps his bombast and pure cojones (he did the burial outfit in real life too) was a factor.  He’s certainly lucky that Hideyoshi needs both he and Gamou for his China adventurism though, that’s for sure.  As for Sasuke he has clear ulterior motives here.  He leverages the street ceremony to drum up business for his tea bowls (successfully) and he hopes the festival atmosphere Date creates will make the chief advisor more lenient towards Rikyu. 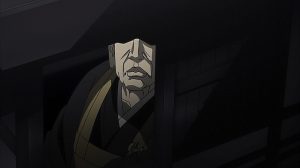 There, things don’t go according to Sasuke’s plan, though it’s through nothing he could have controlled.  Rikyu – as has been obvious for a while – has made the decision that it’s time for him to leave this world.  His entreaty to Tokugawa has failed, and he knows it – the future leader of Japan is too cautious to take the bait yet.  Worse, Rikyu blames himself for what he sees as an accumulation of sins – the death of Souji, the death of Mitsuhide Akechi – culminating in the ultimate failure of imperfection.  Sadly for Sasuke, he believes that his grand gesture will be seen as disrespecting imperfection – and increasingly be believes he’ll never have the chance to explain himself to Rikyu. 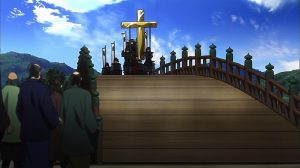 The Monkey spares Date because he needs him, and because he can.  With Rikyu there’s no obvious reason to be lenient, and indeed the vile Ishida is growing increasingly bold in his manner around Hideyoshi.  What Ishida doesn’t know of course is that (in this mythology) the chief advisor and Sen no Rikyu are co-conspirators in the crime of the century.  Of course there’s risk for Hideyoshi that if he condemns Rikyu to die, Rikyu will announce the truth to the world (which even if unprovable would damage Hideyoshi’s authority greatly).  But more so, I truly believe that Hideyoshi still deeply admires Rikyu and sees him as a treasure to the world, and the thought of executing him sickens him. 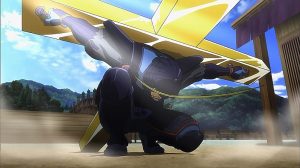 Rikyu, however, is having none of it.  Even as Hideyoshi declares that Rikyu will be exiled to Sakai (Sasuke and Ukon are both confident he’ll eventually be able to return), Rikyu is determined to die – and that his death shall be placed directly at Hideyoshi’s feet.  He palms the Narashiba – the incredibly precious item part of the Tenka San Nasu (three eggplant-shaped tea caddies), and shatters it as he leaves the audience with the chief advisor.  As far as I can tell this never actually happened (the Narashiba ended up with Tokugawa after Hideyoshi’a death, apparently), but the message could hardly have been clearer.  This is the end, and Rikyu will have it no other way.  The journey is almost at the destination.