I run out of things to say about Hyouge Mono.  Watching it is such a strange, almost meditative experience, and writing about such experiences is very difficult.  In terms of narrative structure it’s certainly one of the most unconventional anime ever created.  And somehow, despite being fiction, it feels more true than the history books do – in much the same way a Shinkai Makoto snowscape or train station feels more real than a photograph.  I think that’s down to the series’ almost unimaginable insight into human nature, which makes these famous men seem so familiar and real – even if they don’t happen to be exact copies of the historical figures they’re standing in for. 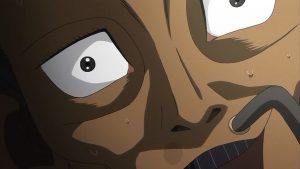 Over the years I’ve often pondered who the true protagonist of Hyouge Mono is, and whether it matters.  I think Sasuke and Rikyu jointly fill the role, and set up a fascinating dichotomy in the process.  The question framed by the series is “To be a warrior or an aesthete”, but these two characters represent a different sort of divide, it seems to me.  Sasuke is the low man and Rikyu the elite, though both are of noble birth.  Sasuke is eternally driven by desire, by hunger for the material.  Sen no Rikyu is the aspirational icon, the purist, the beacon of deeper truth.  But at heart, each is equally insecure about their path in life. 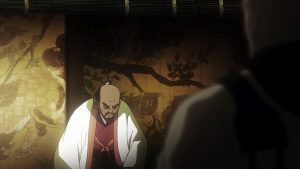 This is a transitional episode for Rikyu, of that there can be no doubt.  His encounters with Hechikan (after this week I’ve come to agree with those who say Rikyu was not complicit in Hechikan’s death) seem to have finally convinced him that he’s lost the path.  He’s ben chafing at the rigidity of the role he’s built for himself for a while, the disconnect from practical reality in his teachings more and more inescapable.  Something has broken in him, and he’s been freed.  He asks Hideyoshi to relieve him of his duties, and while the Chief Advisor refuses a door has been opened that can no longer be closed. 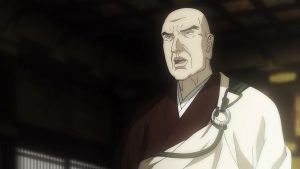 We’ve not seen Rikyu like this.  Director Mashimo Kouichi (the founder of Bee Train and an industry legend) does a remarkable job in portraying the change in Rikyu.  Everything about him is lighter both literally and figuratively.  He connects with those around him with warmth.  He holds a tea ceremony for the monk Kokei, Abbot of Daitouku-ji, a man Rikyu greatly admired who was exiled to Hakata in Kyuushu after falling out with Hideyoshi.  He invites Sasuke for a private ceremony to apologize for belittling his excesses – not because he was wrong about Sasuke, but because he’s seen the weakness in himself. 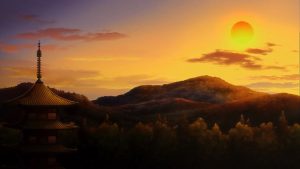 Rikyu knows the end is coming – he knows how things go for those who break with the Monkey – but if anything that makes his sense of freedom even more palpable.  Hideyoshi is in a good mood – his favorite concubine Chacha is pregnant.  But the land is unsettled – Tokugawa is growing ever stronger in the East, and discontent in the capital is being expressed more openly than ever.  To see Rikyu, in these circumstances, embrace the idea that one should strive to find the fun in life – even in his precious imperfection – seems a statement that the man has found his Buddhist enlightenment at last.

Lupin III the First – All the Anime

Post Views: 34 By Jonathan Clements. Master-criminal Lupin III is in for a surprise at a Paris heist, when his attempt to steal a priceless diary is thwarted by another thief. But Laetitia Lambert is no career burglar like Lupin and his crew – she’s a would-be archaeologist, tasked with stealing the book by her […]

Post Views: 83 Evaluation ★★ ☆☆☆ (30 points) All 12 episodes Synopsis The main character, Shigeyuki Yuiga, is a third-year high school student who goes to Ichinose Gakuen. Ichinose Gakuen has a special VIP recommendation system in which only the best students among the past students are paid by the school for all costs of […]

Post Views: 92 “CLOUD MATSURI PREVIEW” [NOTE: This episode was originally streamed live on YouTube] CLOUD MATSURI PREVIEW! It’s been a few weeks since our last podcast, but for very good reason as this weekend we’ll be having our own virtual convention featuring special guests from Japan and more at CloudMatsuri.com Join Jeremy and Andy […]