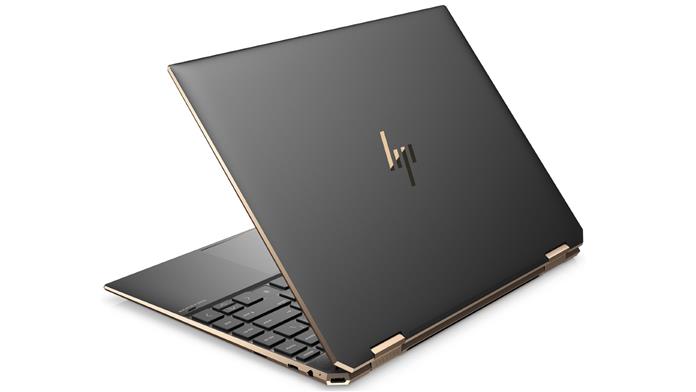 There’s no shortage of ultra-thin laptops right now: to see the full range of what you can get, check out our roundup of the best lightweight laptops. But the HP Specter x360 14 doesn’t just promise a sleek look, a gorgeous display, and great performance. It is also fully convertible. You can use it as a laptop, rotate it 360 degrees for use as a tablet, tent it for watching movies, or even lay the two parts flat as a single rectangle.

If that kind of versatility appeals to you, then this sleek 17mm thin laptop might just be the one for you. But it is not cheap. While the base model starts at a lower price, the model we were sent to review, the ea0008na with the faster Intel i7 1165G7 processor, is more expensive. So is it worth it? Our HP Specter x360 14 test answers that question, looking at the laptop as a whole, including its design, display and speakers, performance, connectivity, and battery life.

First impressions of the HP Specter x360 14 are impressive – it’s a sleek, premium design. The CNC machined chassis is both beautiful and professional, with the reflective HP logo and diagonal diamond cut edges adding extra touches of elegance and originality.

We also like the speaker grille above the keyboard, with its trendy dotted styles; uppercase fonts on the keys themselves; and the subtle placement of the Bang & Olufsen and Specter logos. In short, it is one of the most attractive laptops around.

It’s wonderfully functional too, with large responsive touches spread almost edge-to-edge across the base. The 1.5mm key travel provides a satisfying click, and there’s an impressively-sized (74 x 115mm) touchpad, although we found you had to press a bit harder than what we’re at. regulars.

There’s also a small, inconspicuous 720p webcam at the top, which you can use to unlock your device with Windows Hello, and which you can lock with just pressing a hot key. There is also a fingerprint sensor next to the arrow keys.

As a 2-in-1, the Specter x360 14 is impeccable. The sturdy hinges work perfectly to let you move the screen around 360 degrees, allowing you to put it in tent mode for watching movies or giving presentations, in inverted mode to use it in your lap like a tablet, or whatever. another angle that suits your goals. 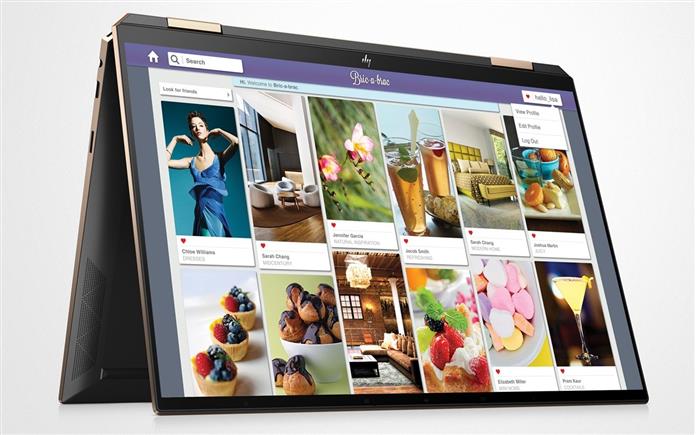 Granted, you can’t quite open the laptop cover with one hand, and it’s a shame that there isn’t a number pad on the keyboard. Plus, anyone used to a 2-in-1 like the Surface Go may find it odd to feel the keys on your lap while using this laptop in “tablet” mode. But these are pretty little issues and shouldn’t take away from the fact that this is a beautifully designed device.

One final point: you also get a & zwnj; high quality rechargeable; stylus – the HP MPP2.0 tilting stylus – completely free with the HP Specter x360 14. It works well with the touchscreen, and is an obvious plus for artists, architects or anyone who just wants to play with digital drawing or taking notes. You also get a free laptop case which is nothing to write home about, but there are always good free items in our book.

Most notable about the 13.5-inch touchscreen is that it has a 3: 2 aspect ratio. This makes it 13% larger than the 16: 9 ratio you find on most computer screens. laptops, monitors and televisions these days. (Notable exceptions are Microsoft’s Surface Go and Surface laptops, which pioneered the 3: 2 aspect ratio.)

In practice, this means that you get bigger black bars when watching movies, but see more of, say, a web page before you scroll down. Whether you prefer 3: 2 or 16: 9 is entirely a matter of personal preference and depends on the type of thing you are using a laptop for. But in general, if you do productivity-oriented tasks, you are most likely to benefit from it, while if you want to watch a lot of movie and TV content, it can be a bit of a nuisance. Watching Ready Player One, for example, the movie took up only 57% of the available screen space.

Depending on how much you want to spend, there are three screens to choose from. The base model comes with a Full HD (1920 x 1280) touchscreen IPS display. Our more expensive review model, however, came with a 3000 x 2000 OLED panel: not quite 4K but as fucking close. And it’s quite frankly one of the prettiest screens we’ve ever enjoyed. The colors were deep and rich, with blacks and whites particularly appealing. The details were super crisp and the light levels sufficient for indoor and outdoor use. 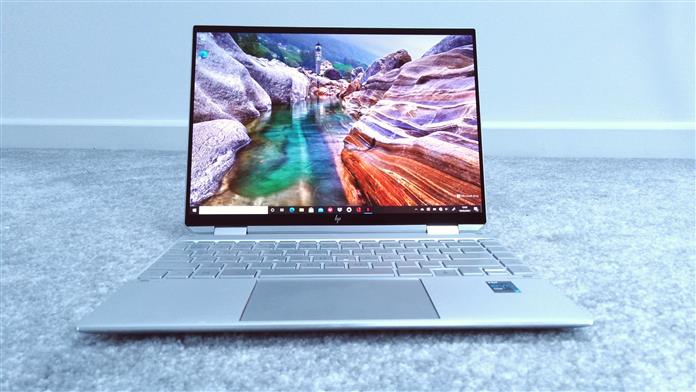 And then comes the audio, and here’s the best news of all. Unlike many of its rivals, the sound here is more than consistent with the graphics. Of course, that’s what you expect when you partner with a renowned speaker brand like Bang & Olufsen. And in this case, the collaboration really delivers, from deep, enveloping bass to the crisp clarity of percussive sounds.

With four speakers (two at the top, two at the bottom), you are sure to get decent sound from your HP Specter x360 14 no matter how you decide to set up your 2 in 1 device. strong too: we found that a volume of 30-40% was more than enough to fill a room. And if you’re a good audiophile, Bang & Olufsen’s EQ software lets you tweak the settings to your liking.

The version of the HP Specter x360 14 sent to us for review includes the Intel Core i7-1165G7 chip. This is certified by the Intel Evo platform, which means that HP and Intel have worked closely together to get the most out of the new processor. And while this dramatically increases the cost, it makes a clear and recognizable difference.

Whether you use the device as a tablet or a laptop, this 11th generation Tiger Lake processor has made everything we do on it easy, including multi-tab web browsing, video and audio entertainment, software productivity such as Microsoft Office, Zoom and Suite calls. 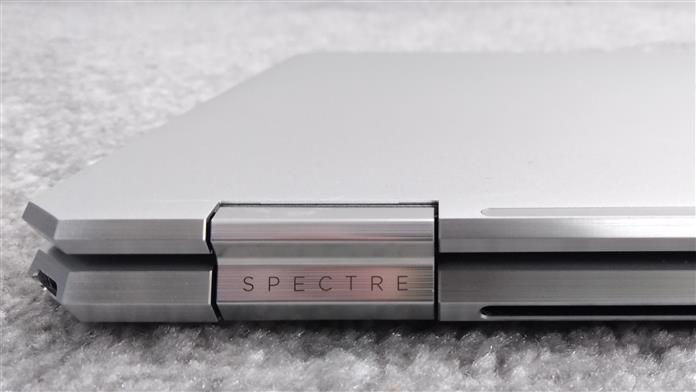 We do have one problem to report though: after a few hours with the laptop in our lap it slowed down and had to be restarted. The base at this point was noticeably warm. By turning it off and on again, things immediately returned to normal. We have had similar experiences with other slim laptops and suggest that it is best to avoid using this type of device on your lap for long periods of time.

HP claims a battery life of up to 10 hours 30 minutes, and that rang with our experience. We managed a number of full working days using only the battery, playing videos, listening to music, using apps like Microsoft Office and Google Docs, and all kind of daily web browsing, the emails and social networks that bother you expect a laptop to handle.

In general, the HP Specter 14 took 8.5-9.5 hours to complete such tasks, and if that’s not long enough for your workday, we admire your work ethic. Meanwhile, in our standard repeat play test of a downloaded Netflix movie, the Specter stayed alive for 11 hours 8 minutes. 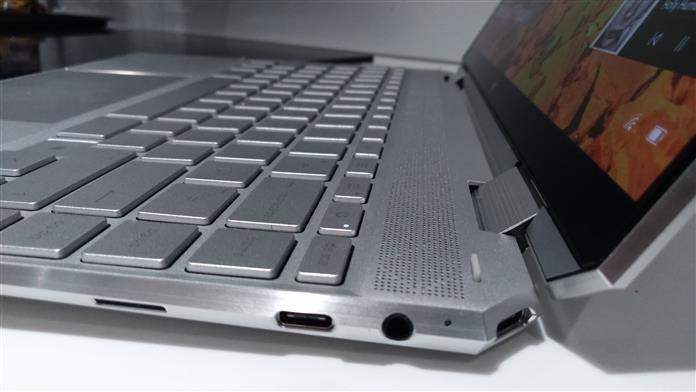 Now for the less good news. With thin notebooks, connectivity is often limited, and you are certainly not spoiled for the ports of the HP Specter x360 14. That said, it’s great to see that there is at least one USB-A slot. , on the left side, then on the right, you get two USB-C ports, which you can both use for charging, and a headphone / mic jack in between. We’re not crazy that one of the USB-Cs sits on the diagonal edge of the laptop, but it didn’t pose any practical issues; it looks a little weird.

What is really a shame is that you don’t have the option of charging the laptop from the left side. Splitting USB-C between left and right would have been our preference, and we can’t understand why HP designed its ports that way.

There’s a ton to like about the HP Specter x360 14, but its main draw is the ability to rotate the laptop 360 degrees. in practice, it works amazingly well … as long as you use it. However, not everyone does. So if you just want a “normal” laptop, you might be better off with a non-rotating rival like the Dell XPS 13.

The other thing you might like or dislike is the 3: 2 screen ratio. This approach has both admirers and detractors, and it’s hard to know which side you’re falling on before you try it. . As a general rule, if seeing large black bars around movies bothers you, go for a 16: 9 screen instead. But if the thought of seeing more than one web page at one time turns you on, then 3: 2 might be the answer to your prayers.

Assuming those two factors excite you rather than repel you, this high-performance 2-in-1 Windows laptop, with its gorgeous display, should be the perfect fit for you. With great battery life, a great keyboard, first-class sound, and a few decent freebies, this laptop can be an expensive option, but offers great value for the money.