How to Create a GIF – Helpful Tips for Choosing Electronics 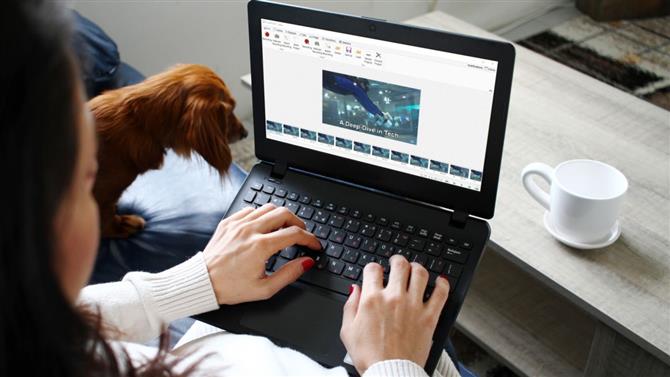 Welcome to our guide on how to create a GIF. GIF is one of the most important forms of media on the Internet. It’s punchy, it’s sticky, it’s usually accompanied by intentionally misspelled slogans that elevate it to a meme.

Something as simple as a GIF should be easy to do, and it usually is, although you need third-party software to do it.

Before you start, it’s worth pointing out that you may already have GIF creation software without realizing it. You can do this in Photoshop, for example, or in the driver software that comes with AMD and Nvidia graphics cards. But to keep it as universal as possible, I’m going to use a free third-party GIF creation tool called ScreenToGif.

Why ScreenToGif and none of the other millions of tools that do similar work? It’s versatile to start with, allowing you to import videos or images to transform into GIFs, as well as offering a feature that lets you transform everything you’ve highlighted on your screen into GIFs.

It is also completely free, with no premium wall or other warnings. The developer is only asking you to donate money or buy games from his Steam wish list, which is such a trivial request that it warms our souls.

So read on for a step-by-step guide on how to create a GIF. 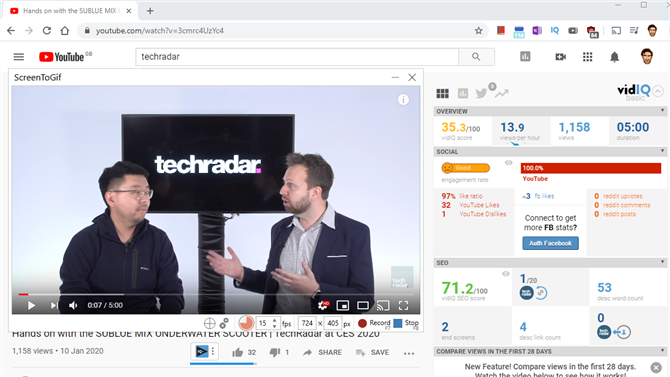 1. Turn what’s on your screen into Gif

If you want to recover a clip from a YouTube video, something on your desktop, or a clip from a longer video on your hard drive, you must use the ScreenToGif screenshot feature.

To do this, open ScreenToGif and display everything you want to save on your screen. If it’s a video, go to the correct part of the video and pause it so it’s ready to start when you start recording.

In ScreenToGif, click the Recorder button in the main menu. This will bring up the ScreenToGif screenshot window, which you need to drag over anything you want to turn into GIF, and then resize it accordingly.

If you want to capture an entire window, you can use the ‘+’ icon at the bottom center of ScreenToGif to automatically snap the screenshot to the size of the highlighted window. 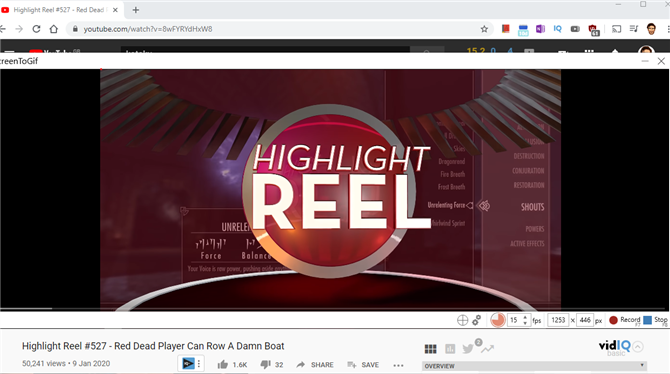 Once you’ve set up your screenshot window, press the Record button in ScreenToGif (or the F7 key) to start recording. Then, if you record a video, quickly press the Play button in the video (the faster you do it, the less the lost images that you will have to delete from the start of the GIF when it is edited).

When you’ve captured everything you need, press the Stop button in ScreenToGif (or the F8 key), and you’ll be automatically directed to the GIF editor. 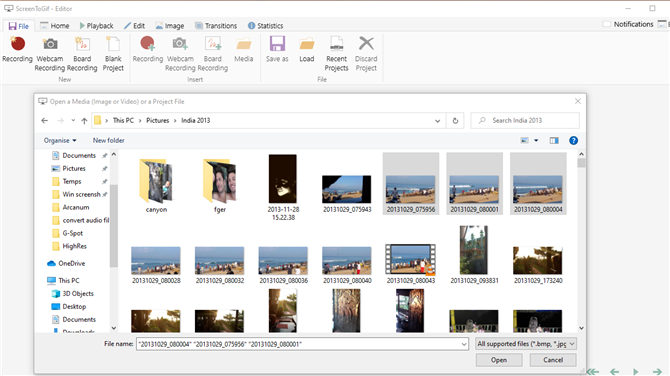 2. How to transform video or photo files into GIF

If you don’t want to convert a screenshot to GIF, but rather want to take a clip from an existing video or combine multiple image files into GIF, you can.

Simply open a new instance of ScreenToGif, then click on “Editor”.

From here, click “Upload”, then select the video or images you want to turn into GIF. If you create a GIF from images, you can select as many images as you want from a single folder by holding down the Shift or Ctrl key while selecting them. 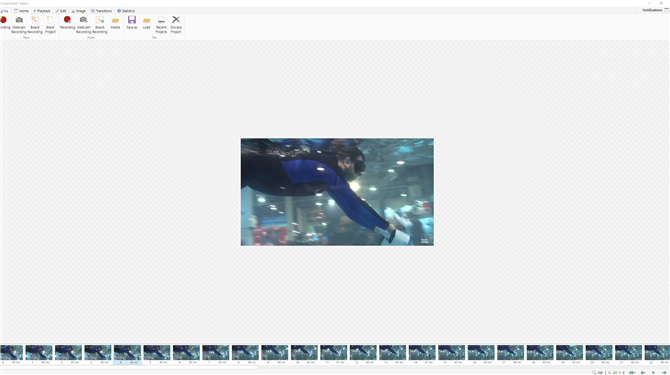 3. How to modify your GIF

Now that you’ve selected your screenshot, video, or images for your GIF, it’s time to shrink them and create the GIF.

We are going to use the YouTube video we saw earlier to show you how to edit and create your GIF. At any time during editing, you can press the Play button in the lower right corner to see your GIF in action based on the changes you’ve made.

The first thing you will want to do is delete all the images (usually at the beginning or at the end) which you do not want in your GIF. To do this, select each one you want to delete in the thumbnails at the bottom of the editor and press the Delete key (you can select several images by holding down the Shift key while clicking on them).

We have now shortened our possible GIF from around 100 images to just 35 images.

Another crucial thing to change is the delay between frames, which affects the playback speed of the GIF animation. 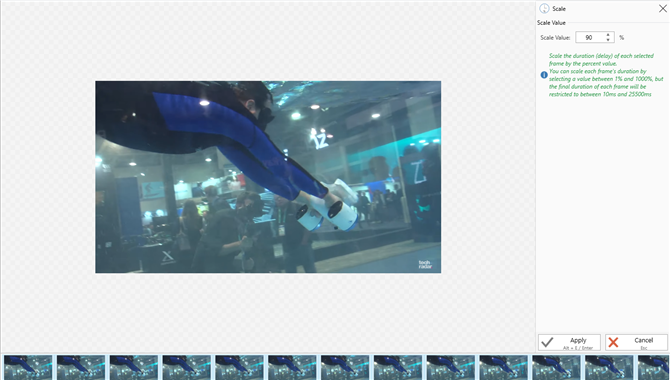 Click the “Edit” tab at the top of ScreenToGif. Here you can use a few options to change the delay between images. Override allows you to set a whole new delay (in milliseconds), but we recommend the more subtle ‘Scale option, which allows you to adjust the animation speed relative to the current speed.

To change the speed of the entire animation, click on a thumbnail at the bottom and press Ctrl + A to select all the images.

Then click on “Scale” and decrease or increase the percentage value depending on whether you want to slow down or speed up your animation. When you’re ready, click “Apply,” and it will make changes to your entire animation.

Another handy cropping feature under the “Edit” tab is “Remove Duplicates”, which allows you to remove frames that are very similar to the frames next to them.

This will reduce the length and size of the GIF file without having any noticeable effect on the animation. 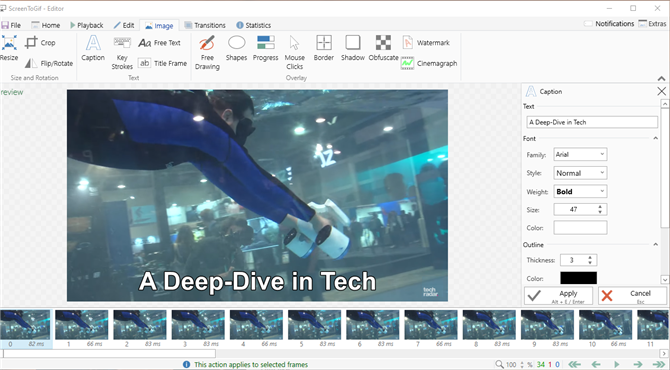 4. How to add text and other visuals to your GIF

There are a lot of other things you can do in ScreenToGif, but if you’re looking to create the next big meme (or just a clunky GIF to share with your friends), you might want to add text to it.

To do this, click on the “Image” tab at the top, then on “Legend”. At this point, you need to select the frames in which you want the text to appear (or select them all by pressing Ctrl + A with a selected thumbnail).

Enter your caption text in the right pane and use the other options in the pane to get the text exactly the way you want it. Click “Apply” when you are done.

In the same way that you can add captions to your GIF, you can also freely draw on it, adding shapes, borders and various other customization options under the ‘Image’ tab. 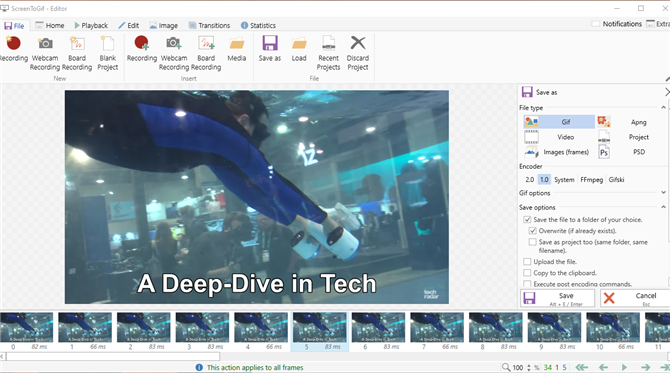 5. How to resize and save your GIF

Finally, you need to resize your GIF to the desired size. You’ll find the “Resize” option under the “Image” tab, where you can also adjust the DPI to adjust the clarity of the GIF. When you are finished, click “Apply”.

Finally, click on “File> Save As”. Then, in the right pane, we recommend that you select the 2.0 encoder, which seems to optimize the file size without any quality cost. Choose the directory in which you want to save your GIF, give it a name and click on “Save”.

You now know how to create a GIF!