How much energy does bitcoin mining really take? – VnReview


Tesla CEO, Elon Musk, once caused the crypto market to wobble, in which the price of Bitcoin dropped by 14%, when he said that his company will not accept Bitcoin car payments for the reason: operation. Cryptocurrency mining uses coal and other fossil fuels that pollute the environment.

After consecutively setting new peaks this year, cryptocurrencies such as Bitcoin, Ethereum, Dogecoin… also raise concerns about the amount of electricity needed to mine cryptocurrencies. Many Bitcoin mining facilities operate 24/7, consuming more electricity than the whole of Argentina. Accompanying that is obviously carbon emissions and many other by-products, which contribute to exacerbating the global climate crisis.

What is Cryptocurrency Mining?

When a Bitcoin transaction is made, computers around the globe enter a race to complete a calculation that results in a 64-bit hexadecimal number, called a “hash”, for that Bitcoin. This hash is put into a public ledger so that anyone can confirm that the aforementioned Bitcoin transaction took place. The first computer to solve the calculation will be rewarded with 6.2 bitcoins, or about $248,703 at the moment.

Other cryptocurrencies also use similar mining technology, contributing to the overall amount of power.

What is a virtual currency mining system?

It’s a barebones computer with multiple graphics cards (GPUs) instead of just one as usual. These systems often use “huge” GPUs from Nvidia and AMD to handle calculations and require very high power supplies. As cryptocurrency mining has grown in popularity, the graphics card market has also fallen into a severe shortage.

Why does cryptocurrency mining require so much power?

First, the graphics card in the cryptocurrency mining system has to work 24/7, so it consumes much more power than just surfing the internet normally. A system with 3 GPUs can consume 1,000 W of power or more at full capacity, equivalent to the operating power of an air conditioner.

Mining facilities can house hundreds, even rows, of mining systems in a single location. For example, one crypto mining center in Kazakhstan is equipped with up to 50,000 mining systems. 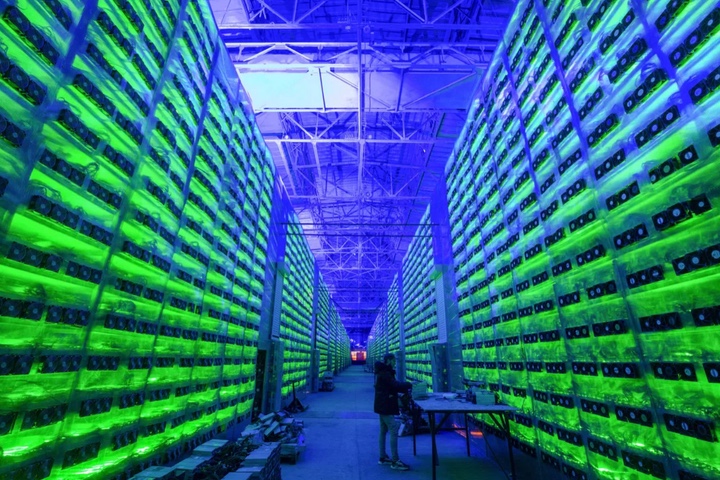 These systems not only consume electricity, they also radiate heat. The more systems in operation, the hotter the air. If you don’t want these expensive rigs to melt, you need some cooling solution. Some mining systems are integrated with multiple computer fan assemblies. But if you have multiple systems, the room where they operate will quickly heat up, requiring you to equip cooling solutions from the outside. If the scale “storks”, a tree fan can solve the problem. However, cryptocurrency mining centers will need more than that, and additional power consumption is inevitable.

How much energy does cryptocurrency mining use?

According to the statistics of Digiconomist, a Bitcoin transaction requires 1,544 kWh of electricity to complete, equivalent to approximately 53 days of an American household’s electricity use.

In terms of money, the average cost per kWh of electricity in the US is 13 cents. That means a Bitcoin transaction will cost more than 200 USD in electricity. If the electricity price is calculated at 2,000 VND per kWh, one Bitcoin consumes more than 3 million VND of electricity.

Bitcoin mining uses more electricity than Argentina, according to a Cambridge University analysis in February. At 121.36 terawatt-hours, crypto mining could rank among the top 30 countries in the world based on electricity consumption.

Why is consuming so much electricity harmful to the environment?

Fossil fuels account for more than 60% of energy resources in the United States, with most of it natural gas, and a smaller part coal. The carbon dioxide produced by fossil fuels is released into the atmosphere, where it absorbs heat from the sun and causes the greenhouse effect.

The more electricity the mining systems consume, the more electricity nearby power plants have to produce to compensate, so more fossil fuels are used. Many states in the US with struggling coal power plants, such as Montana, New York, and Kentucky, are now looking to monetize incentivizing cryptocurrency miners.

Not many solutions have been proposed for the above problems. The University of Cambridge’s 3rd Global Cryptocurrency Assessment Study found that 70% of miners choose the coins they want to mine based on the amount of daily rewards. Power consumption only affects 30% of their choice.

However, cryptocurrency miners are still attracted to places with easy access to cheap renewable energy sources. Sichuan province in China is home to the largest number of miners in this country because electricity generated from hydroelectric plants is very cheap here. The rainy season in Sichuan generates so much electricity that cities in the region have called for blockchain companies to come to work to avoid wasting electricity. 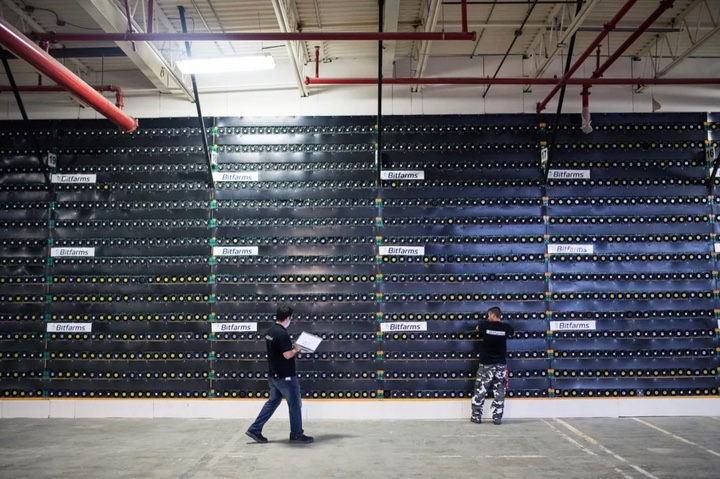 A wall full of cryptocurrency mining systems in Quebec, Canada

Musk discussed it with the North American Miners Association in May, and they have committed to using renewable energy sources. The billionaire then tweeted on June 13 that Tesla will accept Bitcoin again if the rate of using clean energy to mine this cryptocurrency reaches a reasonable level, namely approximately 50%.

The operators of Ethereum, the second most popular blockchain after Bitcoin, are also looking to change the amount of electricity their miners consume. Ethereum 2.0 is an upgrade coming to a close this year, or 2022 at the latest. With Ethereum 2.0, instead of computers looking to solve math problems – a protocol called proof-of-work – machines Computers will be randomly selected to generate blocks for the blockchain, while computers that are not selected will verify the blocks already generated.

To make sure miners do their job right, each miner must stake 32 Ether, or $85,000 – that’s why the protocol is called proof-of-stake. This change will significantly reduce the amount of electricity needed to mine Ethereum.

Which cryptocurrencies are more energy efficient than Bitcoin?

A wide range of cryptocurrencies – currently over 10,000 – use the proof-of-stake protocol that Ethereum 2.0 intends to migrate to, resulting in a significant reduction in electricity consumption.

For example, Cardano uses its own proof-of-stake protocol and consumes 6 gigawatt-hours of electricity per year. For comparison, Cardano’s electricity consumption is 1.5 GWh less than enough to power the South Pacific island nation of Niue, with a population of 1,620, for a year. Meanwhile, Bitcoin uses 126.09 terawatt-hours per year, equivalent to the amount of electricity Pakistan, with a population of 225 million, uses each year.

After Musk’s May 13 tweet, Cardano jumped to a record high as it was seen as an eco-friendly alternative to Bitcoin. The price of this cryptocurrency peaked at $2.47 on May 16, but has now fallen to $1.58.