This episode was kind of a botch job.

There.  At least the last half, especially the last three minutes.  The way I see it there’s been a kind of gradually accumulating debt from the rushed pacing of the first six episodes, and this was the week when it really came due.  Some of it is just lost texture (like an excellent recurring subplot with Souta and a bullying girl from his school), much-missed but sort of in isolation.  But some of it hits right at the heart of the story, too, and thus pretty much undercuts the effectiveness of the entire series.  And as great as this adaptation mostly is, that’s something I can’t help but regret. 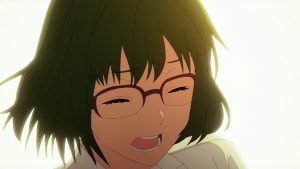 You wouldn’t think you’d ever complain about a romcom moving too fast, but Horimiya isn’t your run-of-the-mill romcom.  The issue here is that the manga already moves fast when compared to most (which move way too slow because they’re knee-deep in cliche).  It’s already playing at the right speed.  But the anime has cranked the pacing up so much that a whiplash effect is really starting to kick in.  What happened in the last few moments of this episode (all of what happened) should have had a major impact.  It comes from one of the most important chapters in the manga.  But it ended up as almost an afterthought that you’d have missed if you blinked. 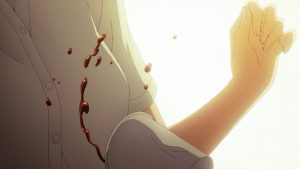 Ironically, one reason for that is that much of the episode was devoted to something that’s heretofore been mostly a casualty to the pacing – the supporting cast.  Yuki and Tooru specifically – and Sakura of course.  Unfortunately the anime is kind of trying to have its cake and eat it too by largely ignoring the supporting cast and then shoehorning in a half-episode about them, and I don’t think this has as much impact as it should have because we’ve spent so little time with these people.  I like all of these characters but the A-part for me was frankly a little boring.  And it really shouldn’t have been. 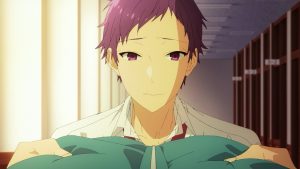 The heart of the matter to me is that if Ishihama-sensei wants to tell the condensed version of the story, he should just kiss off those satellite elements – the “much-missed in isolation” stuff – and focus on HoriMiya.  Getting their relationship right should be the “first, do no harm” oath the adaptation takes.  And it mostly is, but this week’s developments are a notable exception.  It’s just a shame that they’re among the most important and emotionally-resonant in the entire series. 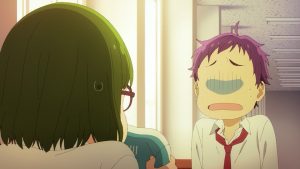 The best part of the first sequence for me was when Yuki was about to round file the cookies Sakura made for her, and decided to eat them instead.  She did this because she realized how disrespectful to Sakura’s feelings that would be, and it’s an important moment because it really shows us the sort of person Yuki is.  The whole Tooru-Yuki-Sakura situation needs more sunlight and water than the anime has time to give it, sadly, and for that reason I would prefer it be downplayed rather than see it half-assed and taking time away from the main pair (and the family, which is crucial to the dynamic in a way this triangle is not). 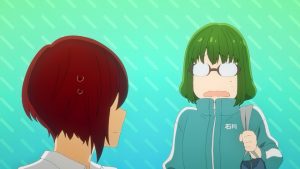 The B-part (Chapter 37 if you’re scoring at home) is – believe it or not – arguably the most important passage in the entire manga.  Izumi heads to Hokkaido for five days for a family funeral (I’m not sure even this was clear in the anime).  He forgets the charger for his period-authentic flip phone, and is in minimal contact with Kyouko.  This is really all about Kyouko and how the separation impacts her – which is to say, profoundly.  It’s a classic absence makes the heart grow fonder scenario, but it comes at a crucial time in their relationship and really cements in her mind just how emotionally dependent on that relationship she’s become. 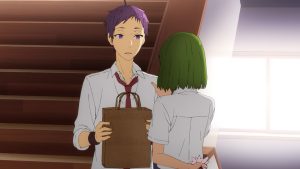 The fact that Ishihama spent more time on the scary movie gag than on HoriMiya’s first time is a bit of a puzzler for me, to be honest.  It’s pretty rare in romcom manga for the protagonists to go all the way, and this is the classic example of where the accelerated pacing of the manga itself was perfect, but the anime cranking it even further makes it seem too soon.  There’s an emotional heft to this event in the manga that keeps it from feeling cheap or lurid.  It certainly doesn’t in the anime either but, somehow, it just doesn’t hit with the same impact – it’s just sort of rote.  “Oh, they did that.”  Build-up and development matters.  But I suppose I should be glad that they left it in at all. 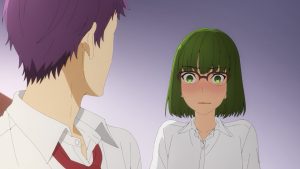 There’s one other whiff here, which is the final scene between Souta and Izumi.  This was a complete miss for me, to be honest – it’s not a moment that deserved to be shoehorned in as a 25-second blip as the credits kicked in.  In the first place I don’t think it’s clear why Souta is so upset, because the anime changed the dialogue in a very crucial way (spoiler).  Beyond that this is a very powerful moment – this is, in a sense, Izumi asking Souta’s blessing to become a member of the family.  It’s the emotional climax of the entire “first time” narrative, not an aside.  You can only cut so much without losing something in the process, and I think we’re seeing the evidence of that right now.  Horimiya is still great, but I wish it had the time to really do the story justice.