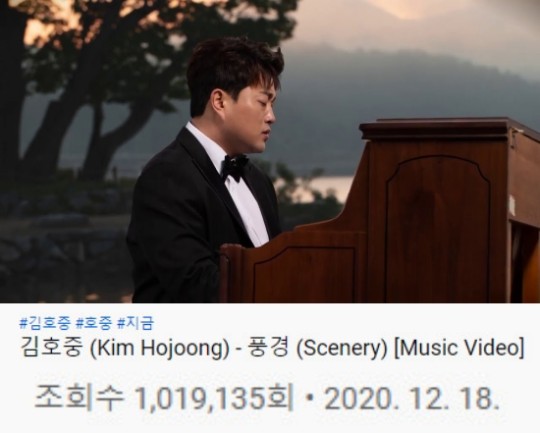 Warner Music Korea said, “Kim Ho-joong [ THE CLASSIC ALBUM ]Special track included in! For the fans, he introduced this video with the message of “The Scenery” (original song from Ha Deok-gyu).

In the video, Hojoong Kim sings’Landscape’. The calm and beautiful melody and Kim Ho-joong’s singing ability attracted the attention of netizens.

As a result, the video exceeded 1 million views as of February 7.

Records like this remind us of his unique popularity.

Meanwhile, singer Kim Ho-joong became a male solo artist who sold the most albums in 2020.

On the 27th of last month, Hanteo Chart, the world’s only real-time music chart, released the ranking of the 2020 male solo category on the annual record chart. The data aggregation period is from January 1, 2020 to December 31, 2020.

According to the data of Hanteo Chart, Kim Ho-joong recorded 1,055,142 cumulative album sales over the past year, boasting the highest album sales among male solo artists.

According to Hanteo Chart and Hanteo News, Kim Ho-jung is the only solo artist who has surpassed 1 million album sales in one year.