Well, my question after “Onidamashi-hen” is pretty much the same as after last week – does it really need to exist?  I’m not sure we learned anything at all here, much less anything really essential to the resolution – though I suppose that won’t be certain until after Sotsu comes to an end.  As I noted last week, Higurashi’s appeal is partly voyeuristic, and there is a certain intrigue in seeing these events from the perspective of knowing what happens.  But I don’t feel as if I’d really have missed anything if this arc didn’t exist. 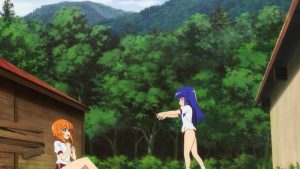 One thing I can say for certain is that I really hope this all blows up in Satoko’s face somehow, because this is way past her stated justification (as ludicrous as that is).  She’s just a psychotic little monster who’s enjoying every minute of this (whatever sympathy I had for her in Gou is pretty much dried up).  And one might almost say the same of the anime staff based on eps like this one, with their comically exaggerated fountains of blood (which of course K1 survives – “it’s just a flesh wound”). 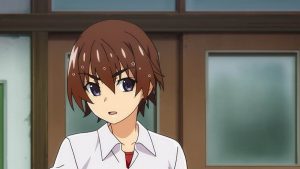 What makes this kind of interesting is that I truly believe both Rika and Satoko are insane at this point – Rika as the result of her experiences and Satoko maybe because she started out that way.  It manifests itself differently to be sure, but I think both of them have a distorted view of reality at this point, and I think the final denouement of Sotsu is going to come down to external factors, stuff beyond either looper’s control (and I don’t mean Hanyu or not-Featherine, either).  That could prove to be quite interesting, but I sure hope these “answer” arcs like Onidamashi are over with sooner rather than later and we can get to finding out.