To paraphrase Bobby Jones when speaking about the young golf superstar Jack Nicklaus, this Higurashi plays a game with which I am not familiar.  I’ve never played the VNs but I have watched every scrap of the franchise that’s ever made it to anime, so I’ve seen it take on many forms and styles.  But this is quite a bit different from any of those, to the point where it’s sort of jarring in a good way.  Of course it may not be so different as it seems to someone who does have experience with the source material, but that’s neither here not there for me. 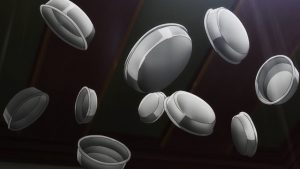 For almost this entire episode we follow along the same track as last week’s.  That is to say the drama here is all mundane in the non-pejorative sense – very much like a fairly standard school thriller in fact.  That something so normal could feel so strange is a testament to just how singular Higurashi’s vibe is.  But it works, at least for me.  I like seeing these characters this way, and being forced to re-think them.  People do grow and change, after all, and it’s interesting to see Rika and Satoko in these new narrative clothes. 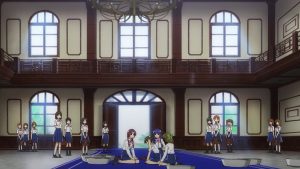 That’s not to say that said drama isn’t a bit over the top at times – this is still Higurashi, after all.  There’s that prison in the basement (I mean come on – seriously?).  Talk about detention!  And the whole business with Satoko pulling one of her old pranks and being shocked when someone got hurt – I don’t know if it was the intention or not, but it highlights just how absurd Satoko’s old antics were.  Because seriously, it’s impossible to imagine Keiichi never getting hurt with all the stuff she did to him. 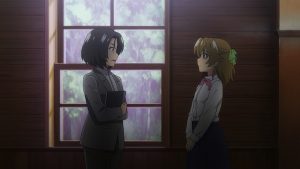 Oddly enough I kind of find myself feeling sorry for Satoko here.  Oddly because she’s not a character I’ve ever really felt sorry for before, and because at least theoretically she’s mostly in the wrong.  But Rika is kind of being an asshole if you ask me, trying to have her cake and eat it too.  She’s also pretty condescending.  Mind you Satoko really should just quit the school and go back to Hinamizawa, because it’s equally clear that she’s miserable and that Rika is doing just fine without her.  And it’s also true that Satoko immediately assumed Rika had ratted her out rather than having faith in her (though I don’t blame her for losing faith, at least to a degree). 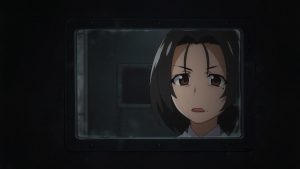 The reunion was a fascinating little interlude.  Again, interesting to see real life happen to these characters we’ve come to know so well frozen in time, though none of them had changed nearly as much as Satoko and Rika.  Everyone (even Rika) slipped pretty easily into their old skin once they were back together and back home.  The highlight here was Satoko’s walk about the village, where Hinamizawa seemed not sinister and terrifying but sad and desolate in the way so many dying villages across Japan are. 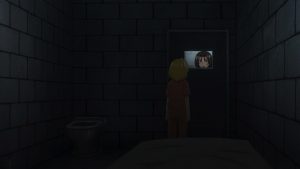 That’s when things really hit the fan, though, and Ryukishi07 reverts to form.  It’s hard to avoid being at least a little spoiled about what happens here given how omnipresent the information is in social media, and while the character who appears to spirit Satoko away is named (spoiler), there’s be no way to know that if one had only seen the anime since she’s a character from (spoiler) who’s never appeared in the anime version.  All we know for sure is she’s not human, and seems likely to be the one who’s been acting in opposition to Hanyuu and Rika.  It’s another interesting cliffhanger, and I remain as engaged with Higurashi as I have been for a long time.