This was a pretty unique episode of Higurashi in my experience, though we’ll have to wait and see if that was an accurate picture or not.    It was stripped down in every sense of the word – just the two major characters in Rika and Satoko (mostly).  No real involvement of the curse, or Hinamizawa Syndrome.  No overt supernatural influences of any kind, in fact.  Just people screwing things up for themselves in superficially mundane ways, which feels almost refreshing. 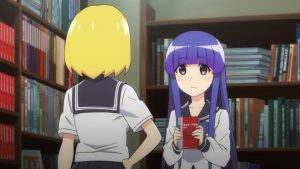 As I said, the jury is still out on that.  But what we see here is a seemingly very normal case of two teenagers growing apart, and the consequences of bad choices.  The truth of the matter is that going to St. Lucia Academy is Rika’s dream, not Satoko’s.  And as someone who’s basically an old woman in an adolescent girl’s body, it’s easy to see why Lucia would have appeal for her.  I think I’ve already established that I hate the notion that Rika wanting to leave Hinamizawa would treated as a bad thing by the narrative, so I’m all in favor of her doing this. 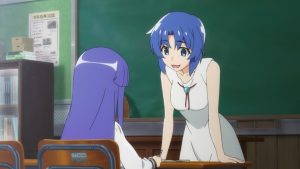 The problem, of course, is that Rika’s dream is not Satoko’s dream.  I think what’s happening here is Rika dragging Satoko along in her slipstream out of guilt.  That in itself isn’t entirely wrong, because she cares about Satoko, but it’s not the best reason to have Satoko join her in this quest.  You also have to wonder if Rika isn’t motivated by fear, too – what Satoko might do if she feels she’s being left behind.  Whatever the root cause, it’s clear from the beginning that Satoko doesn’t really want to do this.  She doesn’t want to say no to Rika, and she buckles down and studies her ass off for two and a half years.  So full credit to her, but… 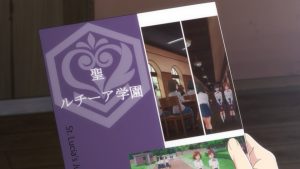 I have my doubts about whether Satoko could have passed the exam at all, if St. Lucia is as exclusive as it’s made out to be.  But be that as it may, the episode does a good job of acting as if the real drama will be Satoko failing and Rika passing.  As it turns out that would probably have been the best thing for everybody concerned, because Satoko getting in starts us off on what looks like a suitably-dark-for-Higurashi path.  Satoko is a square peg at this stuffy academy (“Gokigenyou” is an incredibly old lady of greeting someone) from day one, and it only gets worse once she realizes she’s no match for the school’s academic drudgery. 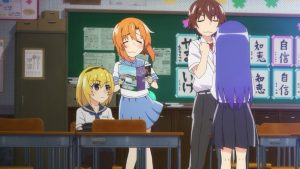 Whose fault is what happens next?  Everyone’s and no one’s, I suppose.  Satoko could have tried harder to fit in, and Rika could have split her time between her new snob friends and her old bumpkin one.  The real question now, though, is why what seems certain to happen next happens.  If Satoko ends up going psycho and starting the cycle with Rika again based strictly on these events, that tells us she was pretty much insane all along.  Or are these negative emotions a sort of conduit for the bad juju from Hinamizawa to re-infect Rika’s life?  I’m rather more intrigued than I have been at any point since very early in “Gou’s” run, which is remarkable progress from where we were a few weeks ago.