This series is a bit a strange ride for me.  There are layers and layers of experience when it comes to Higurashi and the When They Cry universe.  While I’ve seen all the anime that’s out there, I haven’t been exposed to the source material at all.  And on top of that, it’s been a decade give or take since the material this update is (partly, at least) based on aired.  So not only do I have to be careful around discussions, I have to try and remember what the heck happened the last time around.  Is this the same?  Different? 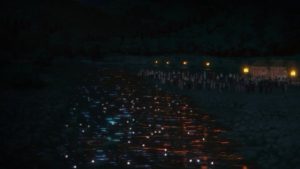 We know for sure that these episodes are titled “Onidamashi-hen”, and that that particular story was not adapted in any of the earlier anime.  But from what I gather the first three episodes are tracking much closer to “Onikakushi-hen” – which I more or less think of as the core story of Higurashi – than “Onidamashi”.  And in fact, this seems a lot like the earlier anime to me, though my memory may be faulty.  For example, I think Tomitake and Takano were straight-up killed in the “Onikakushi” anime rather than disappearing as they did here, but I wouldn’t swear to it. 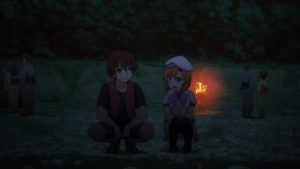 The problem is, that detail – and others like it – are kind of important.  Higurashi is a sort of butterfly effect narrative (as VNs often are), where small changes lead to big changes.  And a change like that isn’t even all that small.  I suspect that’s the way this series is headed, with a series of small variations leading the story in a different direction.  And not even VN veterans seem to know what that might be (serves them right) since “Gou” may be a hybrid of a couple of different scenarios from the VN, or a mix of original and entirely new material. 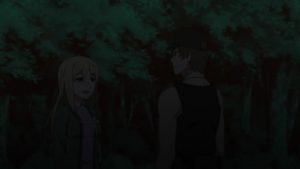 That’s an interesting place to be for me as a viewer, so I’m counting my blessings.  Whatever may be different, the overall experience of watching Higurashi feels very much as it did the first time – which itself is very nostalgic.  Then mix of horror movie cliches and anime tropes has always been a part of this franchise’s appeal, and as campy as it is, it’s also pretty scary when it wants to be.  The increasing sense of paranoia descending on Keiichi (who has his own secrets, of course) has always been unnerving when it’s executed well.  And so far, this version is executing well. 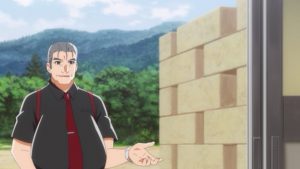 Ooishi’s entry into the narrative played out pretty much as I remembered.  Which is to say even when I was wholly new to this material he struck me as totally unprofessional and unethical in the way he approached Keiichi.  It was always obvious that Keiichi was being used here, but in his position it’s easy to see how one could get entrapped in Ooishi’s web.  The thing is, Keiichi-kun was obviously starting to suspect that things in Hinamizawa were seriously twisted, and Ooshi’s timing (itself a little suspicious) could hardly have been better if he wanted to play on that suspicion. 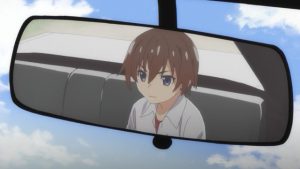 So now we wait for the shit to seriously hit the fan, with the only question being whether it hits in a familiar way or an unexpected (to me, and maybe even to everyone) way.  This is Higurashi, shit will hit fans – it’s a given.  I suppose with two cours to play with we could see several arcs play out – some original, some adaptations, some both – or any combination of the above.  I’m rather enjoying the thought of franchise die-hards being almost as uncertain about where things are going as I am – that’s one part of this experience that’s certainly different from the first time (though I still have to dodge a spoiler minefield every week).

Post Views: 26 Toie recently released the trailer for the new anime title Majo Minarai o Sagashite (Looking for Magical DoReMi) in the 20th anniversary series of the Ojamajo Doremi magical girl anime franchise. Accordingly, the film will premiere on November 13 after a half year delay due to various reasons. The story is about […]

Post Views: 20 As often happens – well, pretty much always happens – just when I’m ready to slap Fruits Basket 2019 on hiatus it dumps an episode I want to talk about.  It comes down to the all-or-nothing relationship I havre with this show – when it focuses on the characters I care about, […]

Japanese Popular Music – All the Anime

Post Views: 15 By Jonathan Clements. In his new book Popular Music in Japan: Transformation Inspired by the West, Toru Mitsui repeatedly returns to the idea that multiple evolutions in Japanese tunes and songs have spurred directly from foreign influences. The examples he cites are from an impressively broad range of categories, spanning everything from […]