Those who are on a diet or just don’t want to put on weight suffer during the Christmas period. In addition to the holidays for most people, the holiday season brings many temptations for the table, especially on Christmas Eve. To avoid weight gain and regrets the next day, check out some healthier dishes for Christmas dinner. 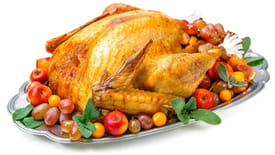 The traditional Christmas turkey can be one of the most caloric dishes of the meal (about 500 calories per serving), especially if served with chestnuts. To escape the calories, replace the chestnuts with apple. The dish remains tasty and the calorie level decreases because it is concentrated in the nut, rich in calories and fat.

Game meats, such as quail, wild boar, in addition to sheep and goat, are leaner meats and can be useful as a substitute for meats traditionally served during Christmas. There are several interesting combinations of game meat with vegetables.

The traditional cod can be exchanged for salmon. In addition to being very tasty, salmon is a source of omega 3 and 6, vitamins A and D, potassium and phosphorus. Sardines and tuna they also have these same nutrients and are a cheaper option in some cases. Fish can also be accompanied by vegetables.

Drinking water during supper is very important. First, water brings satiety and it will prevent you from overeating, something very common at Christmas. In addition, alternating the consumption of alcoholic beverages with water will help prevent a hangover the next day. The ideal is to maintain the proportion of a glass of water for each glass of wine.

There is the great villain Christmas dinner. Desserts – pies, cakes, french toast, panettone and chocotone – should be cut off the menu by those who do not want to put on weight at the end of the year. If you want candy, choose one fruit compote, which can be accompanied by a slice of cheese.