A full-fledged love story breaking out right in the middle of a caper series was not necessarily something I expected, but that’s what “Snow of London” has turned out to be.  And it probably shouldn’t have surprised me, because doomed love scenarios are a core component of this genre, and Great Pretender is nothing if not faithful to the genre.  Every arc has been so different, and this one has the feel of a tragedy to it – not reclaiming the past, but offering tantalizing hints about what might have been. 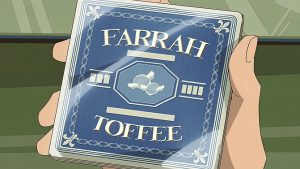 Obviously I retract what I said about James Coleman not being abjectly a criminal as the first two villains were.  Yes he is indeed pompous and prone to abuse his position, but he’s also a flat-out felon.  Thomas’ talent was the inspiration for him to “revive” lost works of art and pass them off as real.  In practical terms most of what he says is true, this scam would have a high chance of being successful.  But that doesn’t change the reality of what it is.  And for someone like Thomas, that’s something he has to live with (and eventually, he decides he can’t). 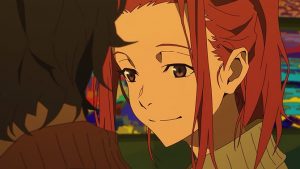 Is it ironic for Cynthia to break it off with Thomas because she can’t support his being part of a dishonest scam?  As subtly as a sledgehammer.  But of course, it’s clear that living through this had a lot to do with pushing Cynthia down the path she eventually chose.  The romance between she and Thomas was obviously genuine – his drawing a ring because he was too poor to buy one was one of the most romantic things I’ve seen in anime for a long time.  But that was then, this is now.  She and Thomas have both profoundly changed – and they can never go back to being the same people they were. 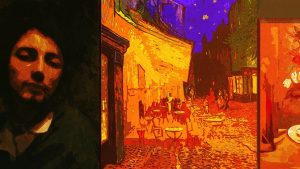 Thomas made a bad choice to go along with Coleman’s scheme, though it’s easy to understand why he did it (and Cynthia lives with the guilt of that every day).  He made a good choice to break it off, seeing one of his fakes in a museum being sketched the straw that broke the camel’s back.  He got rich off the bad choice and two million Pounds (borrowed to buy back his fakes) in debt off the good one – life isn’t exactly fair.  And now Makoto – as Cynthia’s liaison – is offering him a chance to clear his debt by painting another fake.  Talk about pathos.  The goal of “settling things” with James may be compelling, but it’s hard to imagine this being a path of redemption for anyone involved. 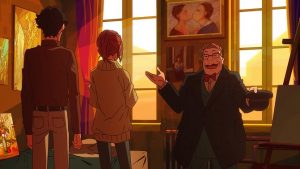 Indeed, as we segue into Episode 15 that’s more or less how things turn out.  It’s a magnificent conclusion to this arc, but it raises an awful lot of questions that it doesn’t answer (which, for the record, is perfectly fine).  For one, I’m struggling to grasp the significance of Makoto drawing the Edward VIII gachapon.  He was part of one of the storybook romances of all-time, abdicating the British throne to marry the woman he loved, American divorcee Wallis Simpson.  He was also, sadly, a lousy monarch and Nazi sympathizer.  I’m not sure how any of that relates to Makoto or his role specifically in “Snow of London” though.  Perhaps the next arc will answer that. 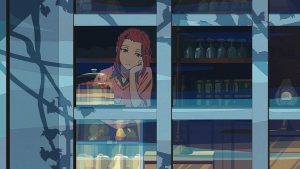 The ethical and moral elements of this arc were much subtler than the first two, and I’d even go so far as to extend that to Coleman.  It certainly can’t be argued that he behaved despicably towards Farrah, so I was glad to see Laurent tweak things to take James’ money, and not hers.  She was very lucky she had a “butler” so completely loyal to her.  Tim (Nakamura Shougo) obviously considered himself much more than that after 35 years of service, but it’s not clear Farrah did until the reality of how much he’d done to save her ass(ets) came into focus.  Farrah was undeniably a victim in all this, but she wasn’t blameless. 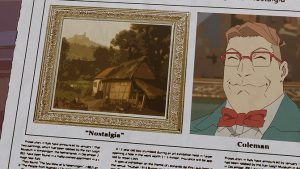 The objective value of a piece of art has always been a matter of some vexation to me.  Who’s to say, really, what a piece of art is or should be worth?  Any painting is as rare as it’s possible to be – it’s the only one in the world.  Makoto’s act of switching Thomas’ fake with the real one was satisfying to me on so many levels (and I don’t think Laurent was especially surprised).  It was a tribute to Thomas, to be sure, but what’s more – what difference does it really make?  The 100 million pounds is still theirs.  It’s not as though Sebastien and Marie could have sold the real one even if they had it.  And Coleman, in his sick way, does have one honest trait – he actually does love art.  And that painting.  He sacrificed his business and his wealth for it, so why shouldn’t he have the real one?  He still paid 70 million too much for it.  It was a very Makoto thing to do – a quixotic gesture towards doing the legitimate thing at the close of a masterful con. 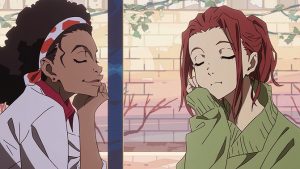 As for Cynthia, I never really thought she and Thomas would get back together.  Too much water has passed under the bridge for that, and they’re not the same people they were when they were in love.  She got some closure at least – Coleman has been screwed (that auction was tense, but she was going to extract every Shilling she could out of him), Thomas is out of debt, and the two of them have made their peace.  Of course Laurent was behind the whole thing – that’s what he does, manipulate everyone else’s lives from behind the scenes.  But we may be reaching the point where he’s going to have to face down his own past, including the woman named Dorothy whose jewel he’s been wearing around his neck since the premiere. 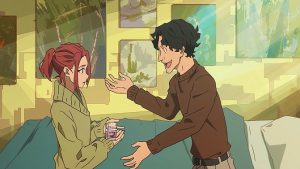 All in all “Snow of London” was pretty great, which of course “Los Angeles Connection” and “Singapore Sky” were too, and it was as different from those as they were from each other.  Interestingly each successive arc so far has been less madcap and more personal than the one before, and each con less convoluted.  All of that fake art by imaginary artists seemed so real, and that’s a tribute to the care and skill that goes into Great Pretender.  If indeed Laurent is the focus of the next arc (Shanghai, apparently) that has the potential to be the darkest and most morally ambiguous story yet.