After a quite mature 2018 generation, the GS51 brings the final piece of an ideal computer speaker set: Bluetooth connectivity.

As one of the products that can be considered as a "symbol" of GoldSound, GS51 is no stranger to Vietnamese listeners. Recently, this speaker company has released the 3rd version of GS51 with a completely new design, including a version of 1.99 million VND for Bluetooth and a version for Basic version of 1.79 million VND. Besides the wireless music playback capability, GS51 Bluetooth is more than the Basic model for playing music via memory card and USB.

The new GS51 speaker version has a front-facing design

Each generation of GS51 offers a small change in design and the latest models are no exception. Removing the square design of the 2017 version or the "cut" block on the main speaker of the 2018 version, the latest GS51 is beveled on the front, not too disruptive but also not boring when placed on a desk or TV living room. GoldSound buyers will certainly realize that the "beveled" shape is also the design style that was reserved for more expensive W models (eg W240), which has now been taken down by GoldSound ". soft". 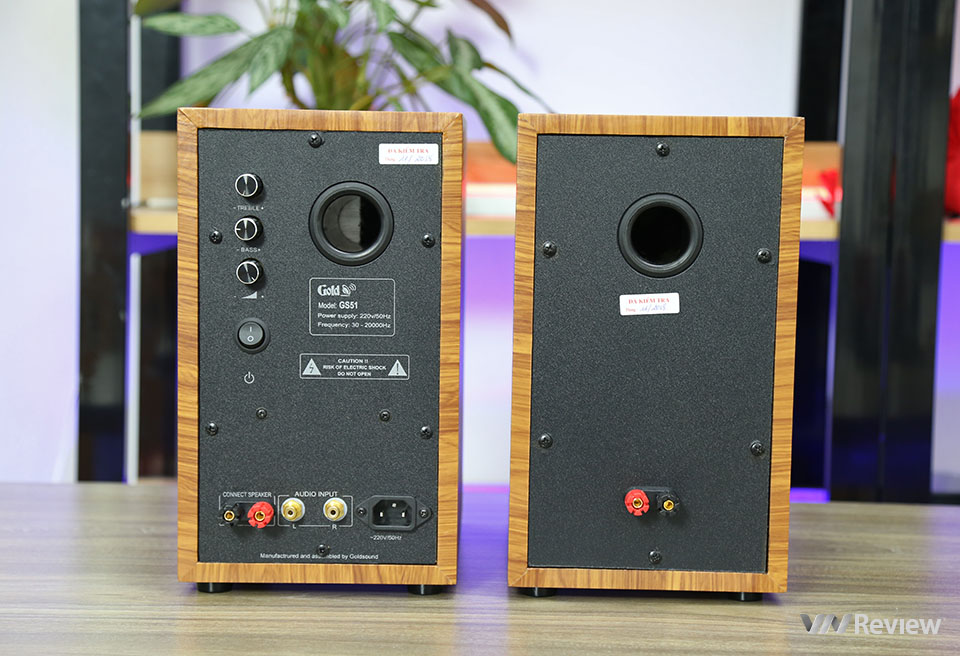 Control button is given behind

Another change from the old generation is that all control knobs have been put behind. On the Bluetooth model, the memory card / USB reader and control keys have also been placed on the top. According to the writer, this is a very aesthetic decision when the two speakers viewed from the front are identical, creating a sense of balance and symmetry. On last year's GS51 generation, the only "beveling" of a small part on the left speaker even made the two sides' diaphragm speakers differ in height. 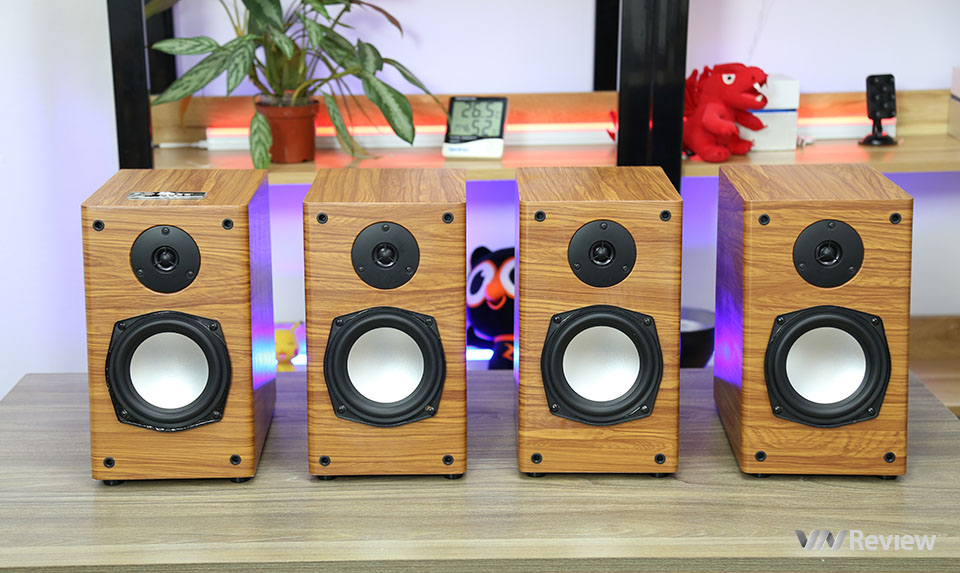 Two GS51 versions have the same design, only different in Bluetooth connectivity 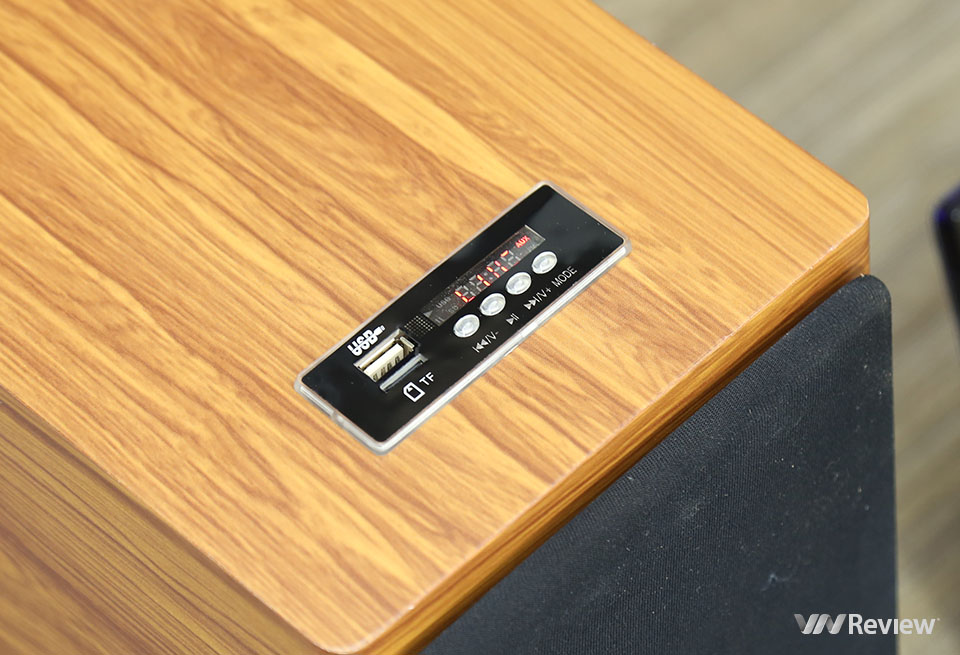 The strength retained from the old generations is the wood grain crust. Compared to the hard plastic shell is still used on GoldSound quite a lot of products (including the W60 model that we recently evaluated), the wood still creates a feeling of superiority. With this cover, users can safely put the GS51 on a desk or TV shelf without worrying about damaging the layout of the room.

Each GoldSound speaker has a very simple user experience and GS51 is no exception. Inside the product box, the manufacturer has pre-installed wires, 3.5-RCA wires and wires between the two speakers. The connecting cable between the two loudspeakers is clearly colored in red and white, to connect to the speaker, the users just need to twist the clamp as on many other common speaker models. 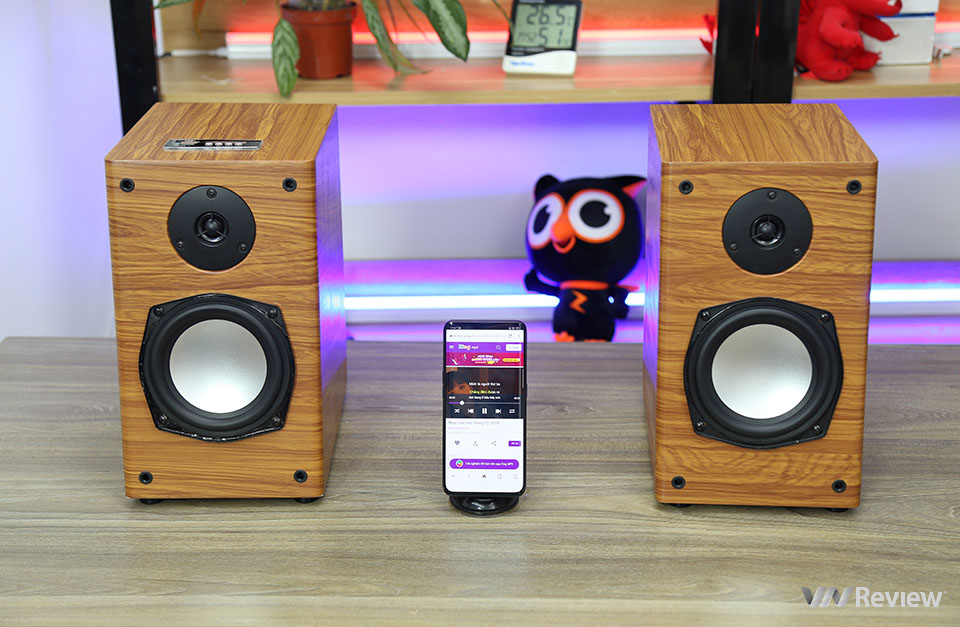 Bluetooth connectivity on the 2 million VND version is no different than regular Bluetooth speakers; Memory card / USB experience is just "plug and play music". Although the manufacturer only sells 3.5-RCA wires (connected from a smartphone, tablet or laptop), users can easily connect GS51 cars to TVs or CD players via widely sold RCA connectors in the market. 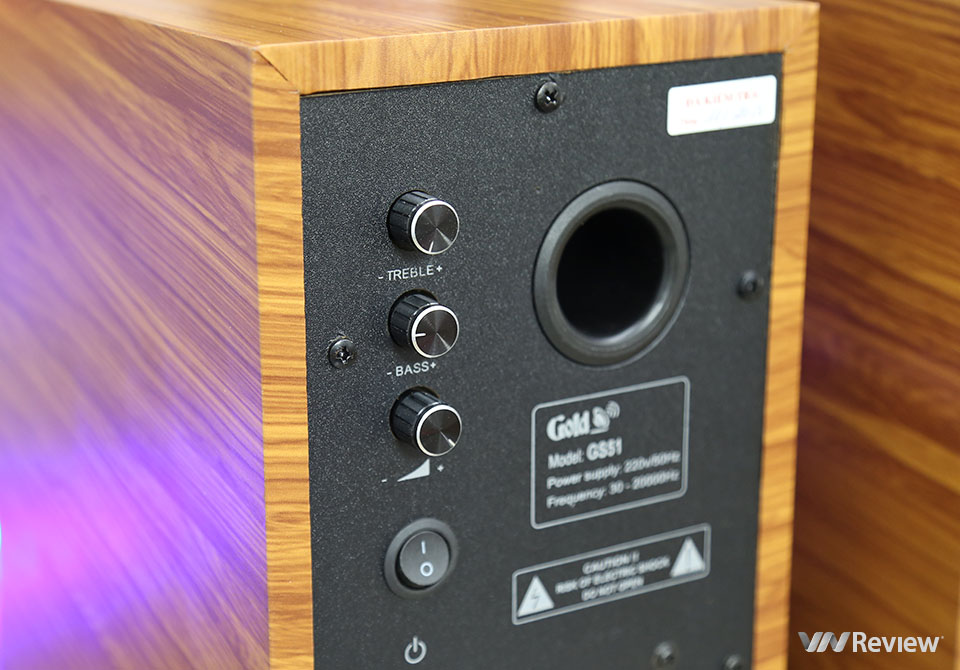 Since the volume, bass and bass controls have all been moved behind the speakers, the GS51 experience can be a bit inconvenient compared to older generations. However, this is really a minor inconvenience because in the actual experience, most users will turn the speaker to enough level to listen and leave it and focus on listening to music (or watching movies, playing games). When using Bluetooth, the role of volume control knob is fainter, because users can adjust right on their own phone / playback device.

According to the personal feeling of the writer, when used as a computer speaker on the desk, GS51 will give the most harmonious sound quality when adjusting the bass to 11-12h and treb only about 9-10h. At this level, the GS51 2018 proved quite attractive with rounded bass, enough volume and airy treb sound. If the bass or treb is set to a higher or lower level, the sound quality of the tracks will be less attractive.

Overall, once harmoniously adjusted, the GS51 is a speaker model capable of beating quite well. With US / UK or Kpop Pop, GS51 creates a vibrant and energetic space. For vocal-focused genres, GS51 offers natural vocals and a slightly smooth orientation. Switching to Classic Rock, the "just enough" Treb band will definitely please fans of guitar and cymbal, but the slightly smooth center also makes many songs lose a lot of energy. In return, with this sound quality GS51 proved not to be "picky" of music, not to make the audience feel annoyed because the noise mixed into the old recordings.

Placed on a 1.2m table, GS51 will create a fairly wide soundstage but has not shown the "deep" level as a headset. The instruments are clearly separated stereo, but listening to classical music is not "ears" yet because the soundstage is quite flat. This is also the limited point that once appeared on the GS51 generation before. Once again, the GS51 is not really powerful when playing classical music, high-speed Metal music or other genres that require speakers to have very good control. However, asking cheap speakers to play Classical well is unreasonable, not to mention GoldSound has adjusted the sound in the direction of prioritizing popular genres (Pop / Dance, lyrical).

Like the W60 and many other products of GoldSound, the sound quality when used in Bluetooth mode is still not really comparable to the sound from smartphones (especially the iPhone or Galaxy S / Note models). The GS51 Bluetooth transmitter has a slightly small volume, detailed reproduction has not yet been refined and coherent. Therefore, we believe that the GS51 should still be focused on the familiar purpose of being used as a computer speaker. Bluetooth mode on 2 million VND version should only be considered as an auxiliary feature when users want to listen to music in a convenient and simple way. 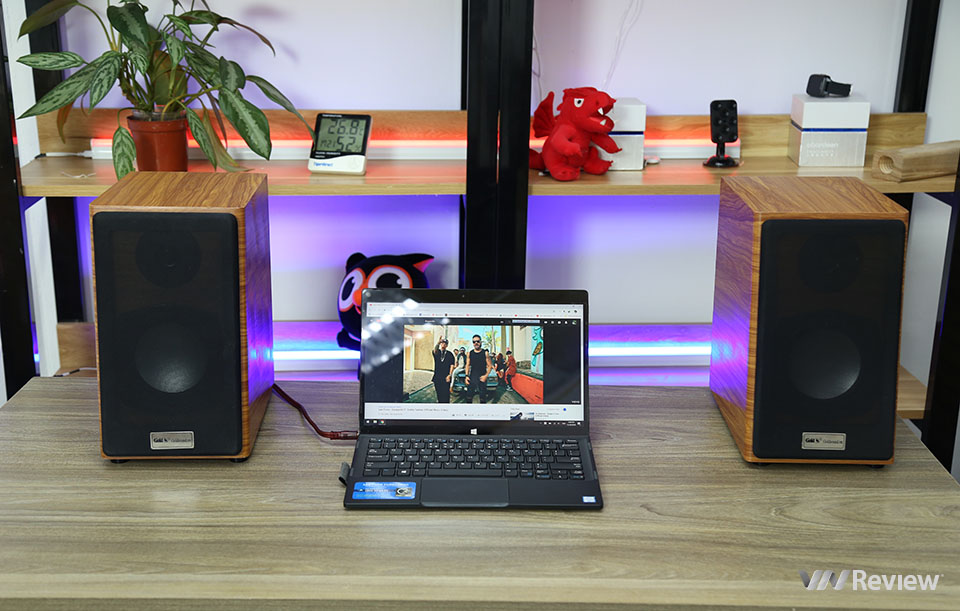 One of the mandatory requirements of computer speakers is to reproduce the feeling of "boom" in movies and games. In this respect, the GS51 is not disappointing in such blockbuster experiences Battlefield 1 or Star Wars. The wide soundstage helps create a feeling of open space and (quite) overwhelming, but because it is a stereo speaker, when playing games, it can only help users locate left / right.

Still with a cheap philosophy, this year's GS51 offers some valuable improvements in design and functionality. While Basic version still has quite a soft price of 1.8 million VND (refer to the manufacturer's home page, goldsound.com.vn), an additional 200,000 VND will help buyers to add the ability to play music from Bluetooth, USB and memory Stick.

– Sound from Bluetooth is inferior to the sound when plugged in