After a one-week end of season break, Fumetsu no Anata e returns to finish its first (hopefully) season.  Of course it has the rather odd run of 20 episodes, so we’re considerably more than halfway finished.  Which sucks, given how much more good story the series has to tell.  Moving on without Gugu is difficult for Fushi, obviously, but for me as a viewer too.  His relationship with Fushi was the means by which both the protagonist and the story itself grew by leaps and bounds.  Those are impossible shoes to fill, but as this episode begins the process of illustrating, his death has an important role in the narrative. 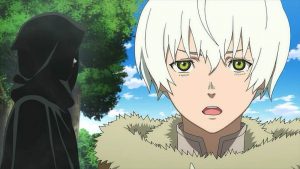 As Fushi struggles to move on in aftermath of his loss, we see the Creator take a much more active role in the story than at any time before.  He sees Fushi trying to process (his word) what happened, and clearly sees this as a crucial junction for his creation.  Fushi has grown so much emotionally through Gugu and the others, and the way this is depicted here is totally on-point.  His circumstances are exceptional but Fushi emotionally reacts to them in a totally human fashion.  He searches for meaning in life – and death – and cannot find it.  And he agonizes in his own role as a magnet for danger for innocent bystanders. 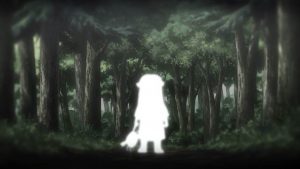 Creator has a vested interest in Fushi seeing this through, of course, but there are limits to his power.  As he admits he can’t control Fushi’s mind, only his body.  Just what role he has in bringing Fushi and Pioran together is unclear, but her appearance has the effect of arguing his case far more persuasively than he can himself.  As much as Fushi tries to push her away Pioran won’t be moved.  She wants, as she says, to do something meaningful with the small amount of time she has left.  In the end she wasn’t able to do much for Fushi (though I’d argue that’s not actually the case), so she’s ready to make amends and help him on this next stage of his journey. 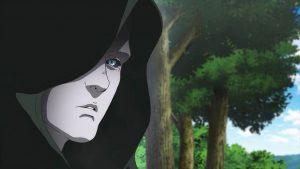 Fushi may be immortal, but Pioran’s vast reserves of life experience give her a perspective that far outstrips his own.  Through her he comes to realize that he’s lost something very precious – his memories of March, along with his ability to transform into her.  “It’s like a second death” Pioran remarks, and her words are oddly chilling.  Like it or not, this is a way for Fushi to give meaning to his own existence – to carry on the memory of those he knew and loves long after their physical forms have been left behind.  It sounds oddly like the function Creator says he designed Fushi for in a way… 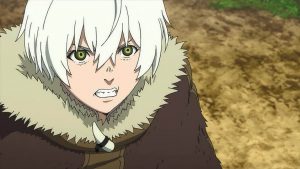 The pair pass through a village, which Fushi refuses to enter for fear of attracting the Nokkers there.  Eventually Pioran asks him how he defeated the Nokkers the last time, and seizes upon the notion that what he needs is a place to train and grow stronger where no people will be endangered.  But on the way to the ship that will take them there, the pair are intercepted by a young girl (Inagawa Eri) who lures them onto another ship, this one headed for the prison island of Jananda.  And Fushi and Pioran are separated, leaving him helpless to protect her. 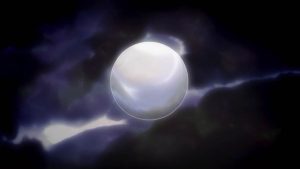 It occurs to me that among his repertoire of forms, a notable omission for Fushi is something small – as in, able to slip through prison bars.  That would have proved immensely useful on Jananda. and by the time he’s finally able to extricate himself (having healed the brand on his hand helps) Pioran is already gone and presumably locked up.  This is not a simple prison, that much is clear – and the people lured there on the ship clearly not criminals.  Why would a prison pay finders to bring fake criminals to a prison island? 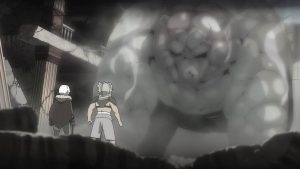 What really strikes be about this episode – and it’s a major element of Fumetsu’s appeal – is the quiet dignity with which is approaches deep emotional pain (which is why the March arc stood out as an exception).  It’s perhaps a bit surprising given that Koe no Katachi was if anything successful because of its raw emotional power, but this is clearly the work of a more mature (though still very young) mangaka.  Fushi’s grieving process is eminently relatable and believable, and so is his emotional growth.  And that, in the final analysis, is what lies at the heart of this series and what makes it something really special.