Statement of the 45th President of the United States Donald J. Trump 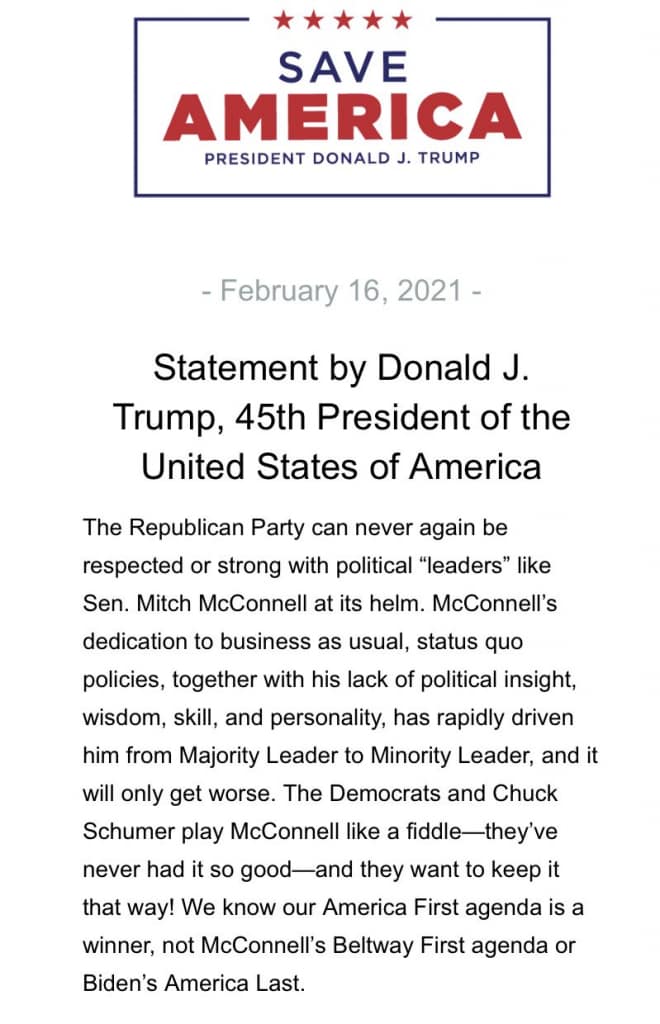 Republicans can never be respected or strong again under the direction of political “leaders” like Senator Mitch McConnell (TNS). Mr. McConnell’s usual focus on business, current policies, coupled with a lack of political insight, intelligence, skills, and personality, quickly pushed him from the Political leadership. number down to Minority Leader, and it will only get worse. Democrats and [ông] Chuck Schumer manipulated [ông] The stylized McConnell – they’ve never been so dominant – and they want to keep it that way! We know our America agenda first is victory, not McConnell’s Beltway first agenda or Biden’s last America agenda.

In the 2020 election, I’m President [Mỹ] incumbent received the most votes in history, nearly 75,000,000. For the first time in decades, all the incumbent Republicans in the House of Representatives were re-elected, and we managed to flip 15 seats. [của Đảng Dân chủ], almost lost Nancy Pelosi’s job. Republicans gained a majority in at least 59 of the 98 state legislatures, and the Democrats were unable to overturn any of the houses the Republicans held. And in “Mitch’s Senate”, in the last two electoral rounds, I saved at least 12 Senate seats alone, of which there were more than 8 seats in the 2020 election round alone – and then the carpet of Georgia, where we should have won both of the federal Senate seats, but [ông] McConnell contradicted his proposal of a $ 2,000 cash grant equal to $ 600. How did that happen? It has become [chiêu trò] advertisement [tranh cử] key to the Democratic Party and it’s a big win for them. [Ông] McConnell then placed himself, one of the most unpopular politicians, in [chiêu trò] that advertisement. Many Republicans in Georgia voted for [ứng viên] Democrats, or they didn’t vote, because they grieved that Governor Brian Kemp, Interior Minister Brad Raffensperger and their outrageous Republicans had failed to do their jobs. [đảm bảo] Election integrity in the 2020 presidential race.

It is a complete electoral disaster in Georgia, and in certain other fluctuating states. [Ông] McConnell did nothing, and never will, do the things that should be done to ensure a system of free and fair elections in the future. He doesn’t have the qualities, never has, and never will.

The only thing I regret is the work [ông] McConnell “pleaded” my strong support and endorsement of the great people of Kentucky in the 2020 election, and I gave him that. He went from negative 1 to positive 20 points, and won. [Nhưng] he quickly forgot it. Without my endorsement, [ông] McConnell was probably out of office, losing badly. Now his credit rating is lower than ever, he is destroying the Republicans in the Senate, and in doing so, is also seriously harming our Country.

The same, similar, [ông] McConnell has no confidence in doing so [ứng phó] to China because of his family’s sizable business in China. He did not do anything to this enormous economic and military threat.

[Ông] Mitch is a stern, sullen, and stern political leader, and if the Republican Senators are still standing by him, they won’t win again. He will never do what was supposed to be done, or what was right for our Country. When necessary and appropriate, I will support the primary candidates, advocates [phong trào] Making America Great Again and our America policy first. We want intelligent, strong, mature and compassionate leaders.

Before the pandemic, we created the largest economy and largest number of jobs in our country’s history, and likewise our economic recovery after COVID was the strongest in the world. . We’ve cut taxes and bureaucracy, rebuilt our military, cared for our veterans, achieved energy independence, built walls and stopped illegal immigration to the Land. our country, and much more. And now, illegal immigrants are pouring into our country, oil pipelines are suspended, taxes will go up, and we will no longer be energy independent.

This is a great moment for our country, and we cannot let it go by using third-tier “leaders” to determine our future!