First of all, it’s almost surreal that we’re at the endgame, something that somehow felt like it would never happen.  Fruits Basket has been a part of my consciousness for so long that I can’t remember a time when I didn’t have an awareness of it.  I certainly didn’t think about it much for a good many years, but the return of the anime brought it all flooding back.  Seeing these events play out on screen really brings it home – the dicking around is pretty much over, and the final act is playing out. 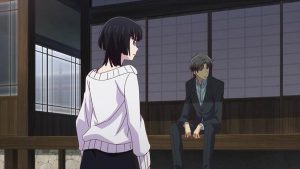 The reveals are coming fast and furious now, and the Zodiac curse is fraying at every knot.  Shigure cheerfully informs Tohru (and Rin) that the curse will likely be ending for everybody.  Not soon enough for Kyou of course, which he seems totally unconcerned about.  But Kureno’s experience and speculation rings true with him – this is the first time all the Zodiacs have been around at the same time, and the reason is that this is the final banquet.  Shigure revealing his true nature at this point can’t be too much of a shock, I wouldn’t think – I certainly never found his smiling facade all that convincing.  But his cold bluntness here may have ended up having a positive effect. 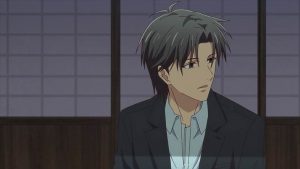 A thing for monsters to look down on and feel better about themselves – that’s the sad fate of the Cat as Shigure describes it.  The genuinely decent members of the Sohmas – and they don’t come any more decent than Kazuma – worry that Tohru’s feelings for Kyou are not love, but pity.  And the irony is, what drew her to the story in the first place was the pity she felt for the cat, being left out and tricked by the others.  Maybe that’s what drew her to Kyou too, at first, but it certainly seems to have grown into something more than that. 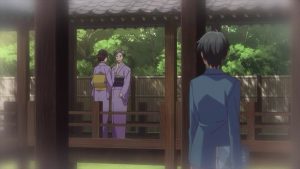 The issue I have with all this (aside from the fact that any Kagura appearance is a curse in and of itself) is that Tohru’s story is actually the weakest of all the main cast in Furuba.  Yeah, she’s had it tough – but compared to what the Zodiacs and their loved ones have had to go through, Tohru angsting over falling in love because it means Kyoko no longer being in first place is kind of weak, really.  I don’t doubt the legitimacy of her feelings but part of me just wants to tell her to get over it.  It’s not as though Kyoko would have wanted her to be miserable and lonely. 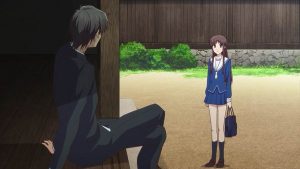 Even with Shigeru and Kagura’s obnoxious and anything but gentle pushes, Tohru still can’t bring herself to tell Kyou how she really feels because of her guilt.  And then there’s the cap (Yuki screwing Kyou as usual, even when he’s not trying to), which Kyou sees when he visits Tohru’s room after an interesting conversation with her grandfather at the cemetery.  There are elements to Kyou’s flashback that definitely beg more explanation – we knew he had some sort of relationship with Kyoko that Tohru didn’t know about, but nothing that would explain what we saw here.