So begins the final phase of the long, erratic journey of Fruits Basket to anime form.  As mixed as my feelings about the series are, it’s one of my very first experiences in both anime and manga, and as such it holds considerable sway over me.  I have a great deal of curiosity at finally seeing the final arcs of the story adapted after all these years.  A curiosity not borne of suspense, but about how viewers will react to them – not least myself. 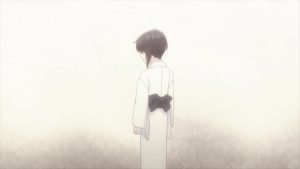 There are certain inherent advantages working in Furuba’s favor as it embarks on this final push.  The series tends to be much better when it’s serious than when it tries to be funny, and there’s a lot of serious stuff in the final acts.  It’s an odd series in that it has a few great characters and a few that are totally insufferable, and while both groups are represented from here on out, the balance may tilt just a bit in a positive direction.  True, some of the very best characters in the series (Momiji, Hiro and Kisa) – the ones whose stories have the most pathos and the least manufactured drama – aren’t as prominent as I’d like.  But in terms of material, if faithful this should be the best of the new anime’s three seasons. 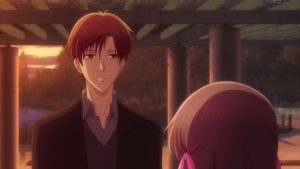 The big new introductions here are Sohmas – Ren (Orikasa Ai), the mother of Akito (who we’ve actually met briefly before, unnamed).  And her late husband Akira (Ishida Akira, funnily enough).  Mostly we see them in flashback, courtesy of Hatori’s explanation to Tohru.  In my mind no explanation can excuse Akito’s behavior towards her family and the human race in general, but it’s clear than Ren did everything in her power to mess her daughter up.  Starting with raising her as a boy, and going from there.  These two are like a wellspring of negative Karma which never runs dry. 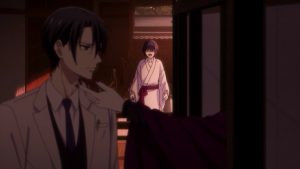 I’ve always been a little skeptical of Hatori’s reasoning for staying with Akito in spite of everything (and I do mean everything) but it’s the lynchpin for so much of the premise that you sort of have to suspend disbelief.  All this hits Tohru pretty hard (yes, the two of them are a lot alike), and she more or less goes to pieces in the park after Hatori rejects her entreaties on Uo’s behalf.  That’s where the preposterous all-seeing Saki – her little acolyte Megumi in tow – tracks her down and drags her home for a “nightgown festival” to commiserate. 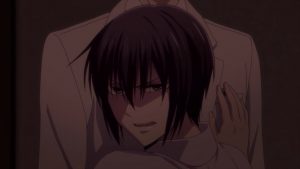 This whole sequence is pretty lightweight in truth, but it has a certain charm to it just the same.  I like the fact that Saki doesn’t exclude Megumi from the goings-on, as if this is all part of his emotional education (and he is an empathetic sort, truth be told).  Along the way Tohru loses her muffler – Furuba is absolutely obsessed with Tohru’s accessories – and Kyou finds it (Furuba is absolutely obsessed with coincidences).  He promptly rescues it from a busy intersection and brings it home and washes it, eventually delivering it to Tohru in true tsundere fashion. 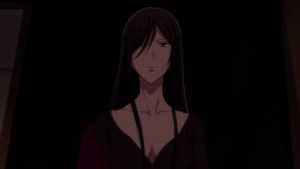 All told this was a pretty solid start for this last leg of the relay.  There are certainly going to be bumps in the road, downright unwatchable episodes – this is Fruits Basket after all – but the closer we get to the end, the more weight every turn of events is going to have.  Love, hate, or indifferent – and at times over the last 20 years it’s been some combination of all of them for me – I’ve been feeling something where this series is concerned for a very long time.  I’m fully vested whether I like it or not.