It’s funny, but whenever I blogged Fruits Basket in digest form, it always seemed to get a fair number of comments (and whatever it was paired with none at all).  Now that it’s on its own (because this season…) it never gets any comments.  I sort of wish I had a show I could partner with Furuba, actually, because its ideally suited to the digest format for me – there are weeks when I just don’t have a whole lot to say about it.  But Summer 2020 just isn’t that sort of season – combining series into single posts is that last thing I want to do. 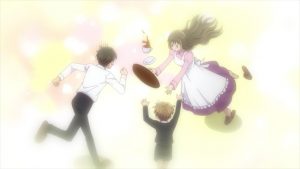 There’s no question that Momiji is the most underutilized character in this cast, but if I could pick another it would be Hiro and Kisa (who so rarely appear separately that it’s easier to think of them as a single unit).  Hiro, especially, makes a nice contrast to the others because by Sohma (and Honda) standards, his life is pretty normal.  He has loving parents who don’t judge him for what he is, his insecurities are based on normal pubescent concerns, and he’s smart enough both to realize he’s smart and to realize how little he really knows.  Maybe there’s not a lot of high drama there and maybe that’s why Takaya shies away from using him more, but Furuba could use more non-annoying normalcy. 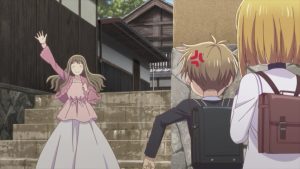 Hiro’s normal family life is a matter of some resentment from Rin (Isuzu), whose own is anything but.  Hiro and Rin have a certain connection in that Hiro was present during a particularly heinous act by Akito – perhaps the single most despicable we’ve seen (and that’s a high bar).  Hiro is a meddlesome little boy, and not just with the girl he loves – he’s aware of how lucky he is and probably feels guilty over it (which Rin plays into), and feels the urge to help.  But Rin is too busy wallowing in self-pity (mind you, if anyone has earned it…) and self-loathing to be open to that sort of kindness. 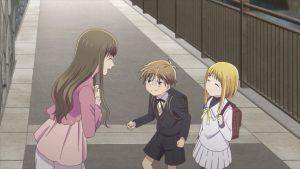 Rin…  She’s a troublesome character for me.  No one should ever have to go through what she does, that’s obvious.  But somehow she seems redundant to me.  It really feels like Takaya is over the top with Rin, throwing the kitchen sink at her and then really getting started.  She suffers so much that it almost borders on self-parody, and it doesn’t really illuminate the narrative in any way.  We already know all these things – Sohma parents are often cruel, Akito is a miserable bastard, Shigure is self-serving – through character arcs that are more important and more engaging.  Rin is like a condiment applied too liberally to a dish where it isn’t really needed.

That is what it is.  There are certainly worse characters in the Furuba stable (including her roommate), and Haru and Rin are hard proof that Sohma children can do more than flirt with each other.  Haru is another character I feel like I should like more than I do – though I suppose that’s a topic for another post.  And at least we got through another episode with no Kagura, no student council and no Yuki harem.  Would’ve liked more Hiro/Kisa and less Rin, but this season has reminded me to appreciate small favors.

Post Views: 280 Evaluation ★★★★★ (85 points) All 2 episodes Synopsis Lupine III and Daisuke Jigen infiltrated the eastern drawer aiming for the secret treasure “Little met”. A bullet hits the plane during a successful run away!Quote-Wikipedia Sponsoring table of contents This is Lupine for adults This is the natural feeling of Lupine Yael Okuzaki […]

Post Views: 155 The final episode of 88 My Hero Academia has revealed that the series will continue to release season 5. This is good news for Superhero Academy fans everywhere! The 88th episode to air on Saturday is the end of season 4 of My Hero Academia. “Something’s coming up” – that’s the saying […]

The anime about Cub cars launches the first promotional video!

Posted on May 11, 2020 Author electrodealpro