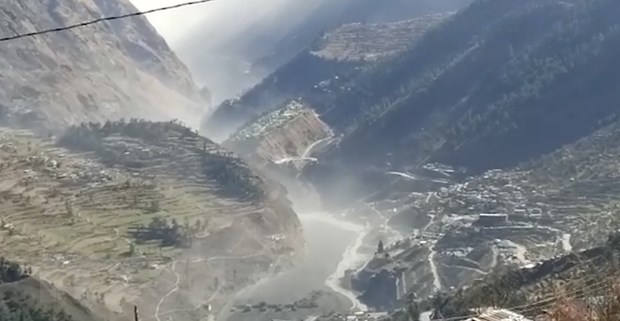 Flash floods occurred in the Uttarakhand state, India when part of the Nanda Devi glacier was in the range Himalaya melted on 7/2. (Photo: AP / TTXVN)

According to AFP news agency, on February 8, officials in Uttarakhand state, in northern India, said the number of people killed in the flash flood caused by broken glaciers in the Himalayas the morning before in this area there were 14 people while 170 people are still missing.

On Twitter, the Uttarakhand state government stated: “To date, 14 bodies have been found in different locations, 15 people have been rescued.” Another 170 people were still missing, officials said.

Before that, the police India It is estimated that more than 200 people were missing in this flash flood, mostly workers working on the two Rishiganga hydroelectric dam projects on the Alaknanda River in the state and local people. Some people have been trapped in two tunnels due to flash floods that followed the soil and rock that filled the tunnel.

Meanwhile, a member of the Uttarakhand state disaster relief force said 12 people had been rescued from one of the two tunnels, while 25-30 people were still trapped in the second.

Hundreds of rescue workers resumed the search on the morning of Feb. 8, including the national and Uttarakhand state disaster response teams, with the participation of the Indian army and naval divers. .

The state of Uttarakhand in the Himalayas is very prone to flash floods and landslides. In June 2013, record heavy rains caused terrible floods, leaving more than 6,000 people die.

This disaster was compared to the media as “Himalayan tsunami” due to flood flow from the mountains flowing down rock and mud, burying many houses, swept away buildings, roads and bridges.