By 2013 Samsung was one of the largest smartphone manufacturers in the world, but it had a reputation of building plastic phones at a time when Apple, HTC, Sony and others were pushing metal as the material of choice for flagships.

Samsung was also at the forefront of a trend it started, that of extra large screens. The large, plastic Galaxys had little overlap with the small, metal iPhones. Remember that the iPhone 5s had a 4.0 screen compared to Galaxy S5s 5.1 screen (not to mention the Galaxy Note, Mega and other jumbo-sized phones).

This sets the stage for the Samsung Galaxy Alpha  a phone whose main purpose was to shake up the companys design language. While it was announced in August, the phone would go on sale in September, the same month as the iPhone 6.

The 4.7 Super AMOLED display of the Alpha anticipated a major change in Apples design philosophy. The original iPhone had a 3.5 screen with 3:2 aspect ratio. The iPhone 5 made the screen taller (4, 16:9), but kept the width the same. Two years later the iPhone 6 would be the first model to properly increase the screen size… to 4.7 with 16:9 aspect ratio.

Samsung was criticized for the low resolution display, 720p. But that only counted against the Galaxy Alpha when compared to Android flagships and those werent its target  its screen had just about the same pixel density as the iPhone (312ppi vs. 326ppi).

The frame of the Galaxy Alpha was made of machined metal with squared off sides, breaking away from the mostly rounded plastic that has been a part of the Galaxy S DNA since the beginning.

The Samsung Galaxy Alpha was available in many colors

In some ways the Galaxy Alpha was Samsungs stepping stone to the major redesign for the Galaxy S6. The 2015 S-series flagship had a metal frame and was 6.8mm thick. That wasnt the biggest departure from the S5 design, however.

Samsung sealed the S6 battery behind a glass back. To add insult to injury, that battery had a smaller capacity than the one in the S5 (2,550mAh vs. 2,800mAh). To be fair, the company had reasons to believe that this will work out okay. 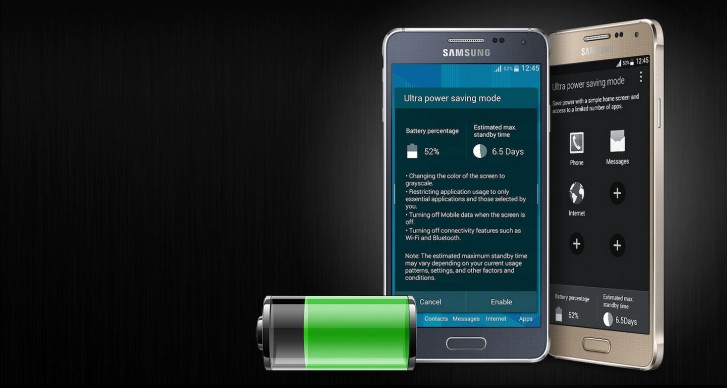 The Galaxy Alpha had a removable 1,860mAh battery  again, criticized for being small by people who compared it to Android phones. But the iPhone 6 had a 1,810mAh battery, the two handsets were very evenly matched. One way or another, Samsung had nailed the specs of Apples new phone, which was still months away from announcement.

The Alpha had a secret weapon up its sleeve  the Exynos 5430, the worlds first 20nm chipset. This combined with the 720p screen resolution made for a decent Endurance rating of 52h (the iPhone 6 scored 61h on our tests).

The Galaxy S6 pushed things even further with a 14nm Exynos 7420, though the smaller battery (compared to the S5) and the new 1440p display made for an Endurance rating that was lower than that of the Galaxy S5. The S6 also removed the microSD slot, just like the Alpha did, fan reaction over this and the battery was quite negative.

The Samsung Galaxy Alpha was praised for its beautiful design, but criticized for its high price and mid-range features  much the same criticisms that were levied against Apples iPhones. In the end, the Alpha was a one-off but its design DNA lived on for many years, shaping the company’s entire portfolio in its image.

Post Views: 93 Information about the long-awaited GTA 6 has been revealed in a leak. According to a famous leaker in the industry, the sequel to Grand Theft Auto V would take place in Vice City and use elements borrowed from Red Dead Redemption 2. Credit: Rockstar Games Information about the future GTA 6 have […]

Post Views: 57 Olympus EM5 MKIII vs A7III vs iPhone 11 Pro Max (for Casual Video) By Steve Huff I have a new video for you guys today! For the past week or so I have still been […] Steve Huff

Post Views: 46 Fake attacks are also known under familiar names – Phishing. Phishing often appears as a trusted activity of legitimate companies or a reputable website like eBay, Paypal, Gmail or online banks in many different forms. In this article, Quantrimang.com introduces readers to some of the most common Phishing attacks. Regardless of the […]