The first two premieres (for me) of the season have been arguably the top two series on my expectations list, and that may be the first time that’s ever happened.  Having so few in that category certainly improves the odds, of course.  Vanitas no Carte (or Vanitas no Shuki as it’s also called) is certainly a series with a pedigree.  It comes from Bones, as close to a platinum studio as TV anime offers these days.  It’s written by Mochizuki Jun, whose Pandora Hearts is among the most beloved genre-bending fantasy manga of the 21st Century.  And while the staff isn’t flashy by Bones standards, it does include some well-known names. 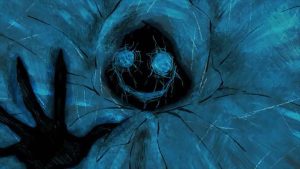 Among those would be Kajiura Yuki, as close to royalty as it gets when it comes to anime background music.  And while this premiere is generally quite good, it was her score that stood out for me.  Soaring, operatic, grandiloquent – it suits the material (which is even more of those things than Pandora Hearts was) perfectly.  This was not a first episode that traded heavily on subtlety and understatement – it was a bomb in every sense of the word.  That works given the material, fortunately, but it certainly is a lot to take in aesthetically. 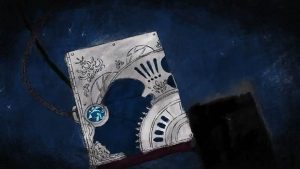 Another one of those standout staff names is Art Director Kanai Shingo.  He’s a sometime-collaborator of Shinkai Makoto – including on 5 Centimeters per Second – and his depictions of the ridiculous Astermite airship and turn of the century (the one before this last one) Paris are another standout in the premiere.  Ito Yoshiyuki, in charge of animation and character design, is one of Bones’ top dogs so you know things are in safe hands there.  There’s a fair bit of CGI in this episode by Bones’ standards but it still looks pretty great on the whole. 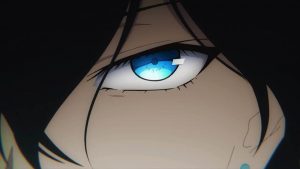 As for the story (and I’m not a reader of the manga) I’ll mostly withhold judgment for now.  It plays like pretty standard vampire fluff and the premiere as style over substance, but going by Pandora Hearts Mochizuki is no slouch when it comes to depth and subtlety.  After an exposition-heavy prologue explaining the premise (sigh) we open on the aforementioned airship where the (obviously) vampire Noe (Ishikawa Kaitou) – traveling with his cat, Murr – (Komaki Miyu) – chivalrously comes to the aid of the ailing (obviously) vampire Amelia (Shitaya Noriko).  As the airship approaches Paris she’s feeling rather faint, and blanches considerably at Noe’s mention of the legendary book that provides the series title, supposedly a chronicle for how to destroy vampires written by a vengeful elder vamp named Vanitas. 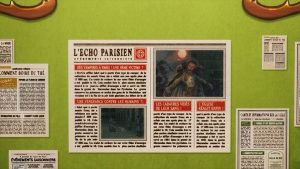 Speaking of Vanitas (Hanae Natsuki), he soon arrives – crashing through the skylight as his horrified second Dante (Kiuchi Tarou) looks on.  He seems to be there to take out Amelia, which prompts Noe to come to her defense and soon, the two of them are fighting in rather grand fashion.  But of course Vanitas’ “world of pain” warning was for Noe’s own good, and he ends up saving Noe from Amelia after she’s gone rogue.  She has a disease, a corruption of her true name (Florifel) – which Vanitas later says is an increasing scourge which will lead to the extinction of vampires if not checked.  But he’s not there to destroy Amelia, rather to save her – which he does, before he and Noe fall to Earth and land safely in a church (possibly Sainte-Chapelle – which seems to bother them not at all). 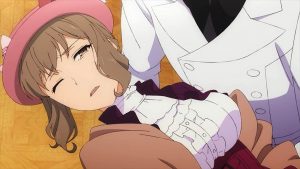 Vampire stories are certainly a staple of anime as of most mediums these days.  And Vanitas no Shuki seems like a more traditional gothic vampire tale than Mars Red, which was a mold-breaker in every way.  There are obvious ground rules here – vampires are forbidden from attacking humans, for example, and there are humans working for the church whose role it is to seek out and destroy them.  Presumably vampires are going to be the good guys here generally, though perhaps that’s more of a function that they’ll be both heroes and antagonists, with humans in a minor role. 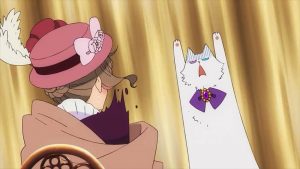 All in all this works, in a highly campy sort of way.  It’s theatrical in a much more traditional sense than Mars Red, and very much at home in the Bones aesthetic.  Ishikawa comfortably outpaces Hanae in the premiere – his performance is far more layered, while Hanae kind of does his usual schtick.  He’s not the strength of the premiere, but there are a lot of good things happening – the various elements of sight and sound come together in an appealingly symphonic way.  I’m going mostly on faith (in Mochizuki) as far as the story being interesting enough to sustain its momentum, and the fact that the manga is ongoing is always a worry (two cours is better than one).  But like Sonny Boy, Vanitas no Carte mostly connected in its premiere by delivering what I expected from it, and that makes this a very good start.