This season is going to require some very hard choices for me, because at this point in my life I’m neither willing or probably able to attack an anime schedule like I could back in 2012.  It’s either going to be dropping series I’d normally cover, or keeping my posts much shorter.  Whatever it is, stuff like Tokyo Revengers is impossible to ignore.  It’s only one episode, but it could hardly be more obvious that this is a series that brings something substantial and probably quite powerful to the table.  And this was only in the middle of the pack on my expectations chart. 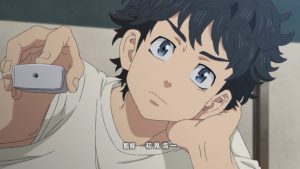 Tokyo Revengers is a quite well-respected manga, certainly the most successful in Wakui Ken’s career so far.  It appears in Weekly Shounen, a magazine which tends to be quite tonally different from WSJ (as this premiere suggests).  An interesting sidebar here is that the manga title includes the manji symbol (not surprisingly, as the gang at the center of the story is “Tokyo Manji”), which the less informed see as a swastika.  It’s actually a holy symbol thousands of years old, and there’s a whole sidebar attached to this as there’s been a movement to remove it from Japanese maps, where it’s used as a marker for Buddhist temples.  Will it disappear from the anime altogether?  I hope not – ignorance shouldn’t be allowed to erase history. 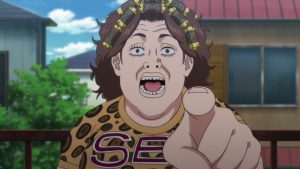 As for Tokyo Revengers the anime, a few things stand out.  The production values from Lidenfilms don’t impress as anything spectacular, nor does veteran Hatsumi Kouichi’s direction.  Indeed this plays (to someone who hasn’t read the source material) as a pretty by-the-books adaptation.  But whether that’s true or not, my gut is telling me it’s not a problem because the material itself is front and center.  I could be wrong but first impressions are that Revengers doesn’t need a lot of stylized flourishes, just solid and faithful competence – much like the work Madhouse did with Kiseijuu (which this show vaguely resembles, to my eye). 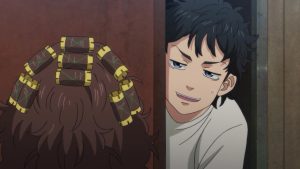 That would be true, of course, because the writing is strong enough to carry the series.  And based on one episode I certainly think it is.  This looks like a classic time-travel scenario, but the execution is excellent.  There’s subtlety in terms of the characterization, and what could be throwaway moments are well-played and interesting.  The protagonist is Hanagaki Takemichi (Shin Yuuki), a 26 year-old loser depressed as hell with his life even before he hears on the news that his only girlfriend (all the way back in middle school) was murdered in a gang incident. 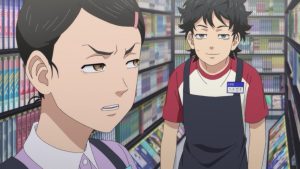 We get a good sense of just how unsatisfying Takemichi’s current life is – crappy apartment, crappy job, no social life, no prospects.  My initial sense of what was going to happen on that Yamanote Line platform was that he was going to jump, but it appears that he was pushed (though that raises some questions based on what happens later in the episode).  Sure he’s going to die (who wouldn’t be) he finds himself flashing back to July 4, 2005 – 12 years earlier, second year of middle school.  In his rose-colored rearview mirror, this was the “peak” for Hanagaki Takemichi – but the reality isn’t quite this simple. 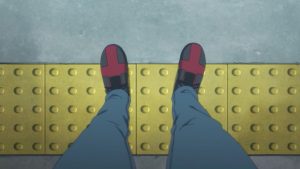 These middle-school sequences are the best part of the episode, and they revolve around the notion not that youth is wasted on the young, but that experience is wasted on the old(er).  “If I knew then what I know now”, indeed – I’m sure all of us could have saved ourselves a lot of heartache.  There’s probably no point in our lives when our perception of ourselves is more out of line with reality – in both directions – than middle school.  And the moment when Takemichi catches a glimpse of his 14 year-old self in the mirror and is horrified at how lame he was is a fantastic one, with essential truth radiating off it in waves. 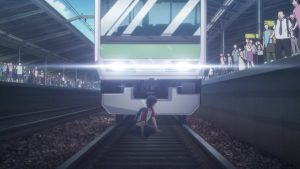 Takemichi jumping back to this point is obviously no coincidence, as he clearly sees it in hindsight as the moment it all started to go badly.  His own gang of second-year chibi delinquents goes looking for trouble at a big city school in Shibuya, and runs afoul of the nascent Tokyo Manji gang, beaten to a pulp and effectively taken into slavery.  But this wayback trip also allows Takemichi to see the lost love of his life, Tachibana Hinata (Waki Azumi) one more time.  It also delivers him into a chance meeting with her younger brother Naoto (Ohsaka Ryouta as an adult, Hirata Mana as a child – both excellent) as he’s being bullied in the park.  Takemichi can once more deliver the benefit of experience out of time, and this is a life-changing moment for the young Naoto. 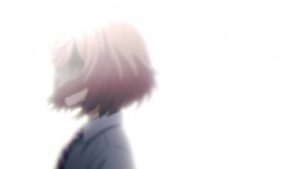 This scene strikes me as the key one of the premiere.  It’s very authentic (I love the “you can call me Takemichi” moment where Naoto says “I won’t – but thanks”), and clearly sets into motion the still-unexplained events which drive the story.  Time travel is well-worn as a premise, obviously, but this one reminds me (more so than Erased, which I’ve seen referenced) a bit of Taniguchi Jirou’s A Distant Neighborhood – which is extremely high praise, believe me.  The manga is ongoing but this adaptation has two cours to work with, so I suspect it will be able to give a good account of what makes the source material so highly-respected.  It’s hard to see Tokyo Revengers not making the cut, no matter how high the cut line is.