Without a doubt, Nomad: Megalo Box 2 was the biggest unknown among the many sequels on my chart this season.  The most obvious reason is that it’s a sequel to an original series, with no road map to refer to.  Beyond that, though, this is a sequel I was unconvinced needed to exist.  The original Megalo Box was my #1 series of 2018 and even if it was a weak year, there were good reasons for that.  And among them was the ending, one of the most satisfying and elegiac you could hope to see.  The job had been done right – why do it again? 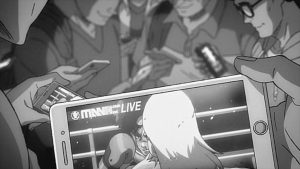 It’s only one episode, but this premiere did about as much to convince me as a single ep could do.  It was, in a word, brilliant.  One of the reasons I loved Megalo Box so much was because it was unapologetically striving to be high art – there’s a cinematic ambition and poetry to this series you just don’t see in anime (or cinema, frankly) very often.  I had missed the fact that MB screenwriter Kojima Kensaku worked on Midnight Diner – I suppose because at the time I hadn’t watched Midnight Diner – but now, I can totally see it. 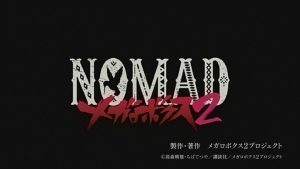 So, the chops are definitely still razor-sharp as far as the production is concerned.  What about the characters, the story – do they need to be revived in Nomad?  That’s the question that’s impossible to answer definitively yet, but the early returns are certainly positive.  Joe returns as “Nomad”, a down on his luck underground boxer hooked on painkillers and haunted by visions of Nanbu, his old trainer (who’s obviously passed away in the intervening years).  That’s a sadly believable fate for Gearless Joe, which is the first hurdle cleared.  Now we need to see whether his continuing story is one that demanded to be told. 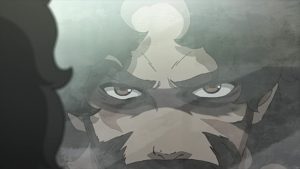 That this works so brilliantly – and Lordy, it does – is a testament to both the writing and filmmaking at work here.  Joe’s life is painted in unsparing detail.  The cheap motel rooms, where he vomits after every fight.  The shakes, the regrets.  Beautifully tragic sequences like tossing his pills (bought illegally, of course) onto the squalid floor of a bar toilet in a rage, only to succumb to his desperation and scoop them back into the bottle.  If anything could cement the image of how far Joe has fallen, that image does the job. 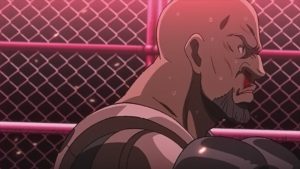 But we see also something equally important, which is that Joe is still himself.  He may be reduced to underground fighting again but he refuses to participate in fixed matches, despite the fact that it constantly wears out his welcome (that’s how he got the moniker of “Nomad”).  After a stupendously executed scene where he encounters a lone wolf on a snowy night and they have a staredown, Joe later finds that wolf dead, struck by a car.  He initially rides off, but then returns to bury the animal – no doubt recognizing a kindred spirit, and wanting to pay homage to it. 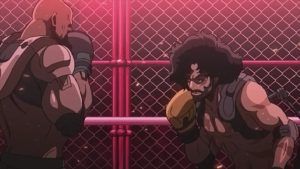 Nanbu is dead, certainly.  Of Sachio there’s no mention but his return at some point is a given.  The most important new face we meet is Chief, played by Tanaka Miou in a nuanced and riveting performance from an actor who rarely works in anime.  We initially meet him performing in Spanish at the bar where Joe has his confrontation with his drugs, but it turns out Chief is a boxer too.  An ex-pro, too good for the circuit and thus impossible to find new opponents for.  Nomad volunteers (not knowing that Chief is the guitarist), and eventually the two meet in the ring for the first truly memorable fight of the new season. 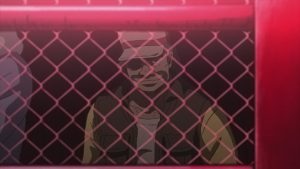 As I noted in my coverage of the original Megalo Box, while boxing is hugely problematical as a real-world sport it’s pretty unmatched as a theme for sporting fiction.  So inherently dramatic, so personal, so visceral – and this fight is a gem.  The moment where Chief stands on Joe’s foot and Joe realizes that yes, this is a pro and a clever one is a classic, part of the process of these two coming to understand and respect the other’s abilities.  But that only goes so far, as Chief – on a signal from the pit boss – takes a dive on a right hook Nomad knows wasn’t good enough to take down a man of his caliber. 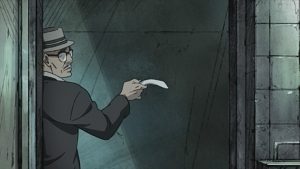 You can’t help but wonder if Joe’s moralism and inflexibility is what led to his downfall, but that’s one of many fascinating questions we’ll have to wait for future episodes of Nomad to see answered.  To be frank even if the narrative basis for continuing this story was weak I’d still be watching, because the filmmaking skills on display here are so riveting.  But the early indications are that Nomad: Megalo Box 2 is indeed a story with a raison d’être.  I’ve totally invested after this premiere, which assuaged my doubts as well as I could possibly have hoped it might – the the point where I can unreservedly say it feels great to have Megalo Box back.

ED: “El Canto del Colibrí (The Song of the Hummingbird)” by mabanua