After the leaked information, Samsung has finally officially launched its latest mid-range smartphone, Samsung Galaxy F62 with a powerful configuration, long-lasting battery capacity. In today’s article I will share my first impressions of Samsung Galaxy F62 for you to see.

Note: Samsung Galaxy F62 officially launched in the impressive market with a price of INR 23,999 (equivalent to 7.6 million VND)

With this battery capacity we can freely use with daily tasks as well as watch movies and surf Facebook, especially plowing games throughout a day. I had a good time using and experiencing the Galaxy M51, also with 7,000 mAh battery capacity within a week and the results of the duration were very impressive (13 hours more than non-stop use). 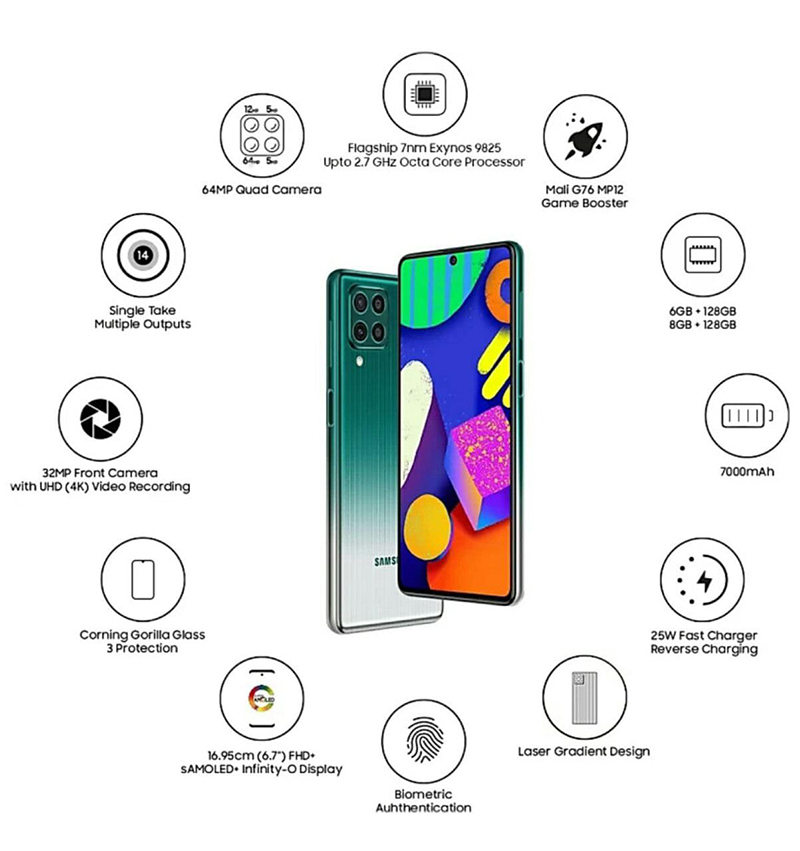 In addition to the massive 7,000 mAh battery, our Samsung Galaxy F62 is also equipped with Samsung fast charging technology with a capacity of 25 W to shorten the charging time, helping us to hold the phone continuously. According to my experience, with this 25 W charging capacity, the machine will be fully charged within 2 hours.

Configuration is the next highlight of Galaxy F62, I also did not expect a mid-range smartphone like Galaxy F62 to use the configuration of a flagship like Galaxy Note 10+. It can be said that Exynos 9825 is a high-end chip and certainly the performance is very strong and smooth until this point. 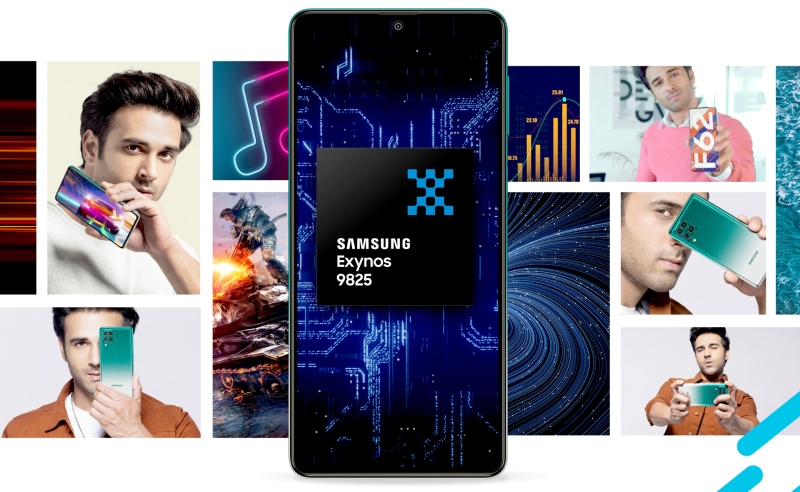 Besides, Galaxy F62 is equipped with 6 GB or 8 GB RAM, combined with a powerful configuration we can freely multitask, use many applications at the same time. Besides, along with internal memory is 128 GB or 256 GB, allowing users to comfortably store music, games, documents. Besides, with a 7,000 mAh battery we can record movies, take pictures continuously without worrying too much about memory. If not enough we can expand with external memory card.

Samsung Galaxy F62 has a simple safety design that stands out with its youthful, eye-catching colors

In terms of appearance, the Samsung Galaxy F62 has a similar design to the mid-range Samsung home, with rounded corners and a curved back from the bottom. In general, this design is quite safe, giving users a friendly and easy to use feeling. 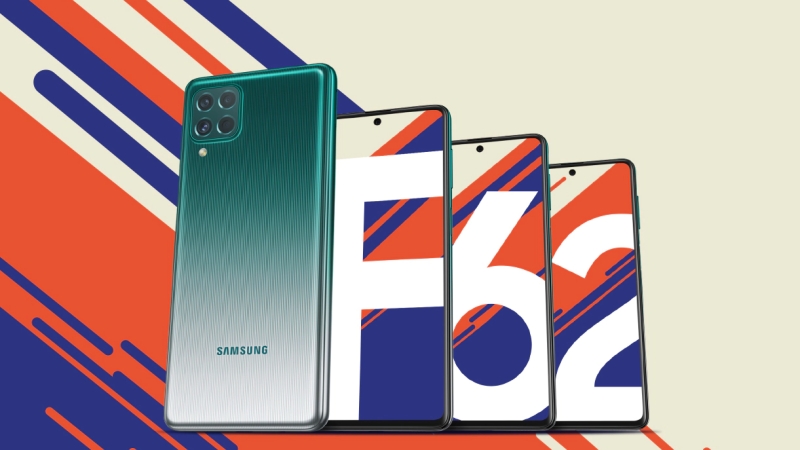 On the front of the device we have a 6.7-inch screen and a hole-punch selfie camera design (infinity-O Display) that gives us a more enjoyable movie-watching experience with a large screen, viewing angle. Wide, display more content. In terms of visibility, the F62 has Full HD + resolution, combined with a Super AMOLED panel to display vibrant and sharp colors.

I highly appreciate the visibility on Samsung machines when it can bring entertainment experiences such as watching movies, playing games, viewing photos, and enjoying eyes. In addition, F62 is also equipped with fingerprint sensor integrated power key located on the right side of the machine. It can be said that this gives the machine a more seamless design and is very easy to use. 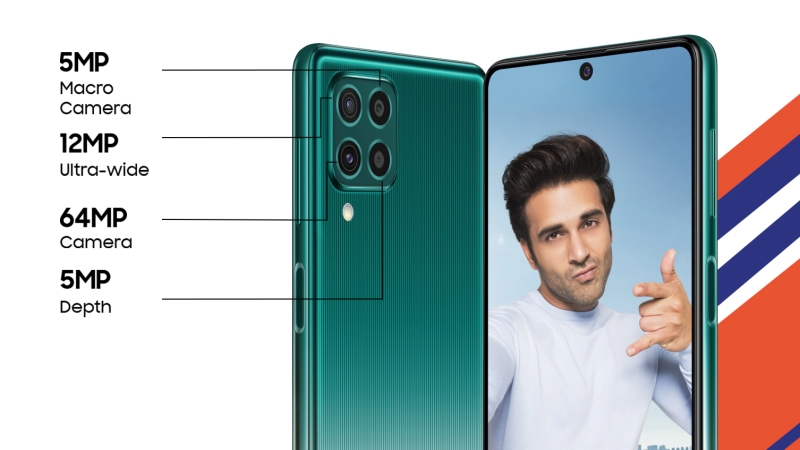 Cluster of 4 cameras of Galaxy F62

It can be said that the Galaxy F62 with the main camera has a high resolution of 64 MP which gives us sharp pictures as well as bright colors. Besides, it is also equipped with many cameras with many different lenses that allow us to freely create artistic and interesting photos during use.

It can be said that Samsung Galaxy F62 is a phone that has left me with many special impressions at launch. But the most special is the machine with an extremely buffalo battery capacity of 7,000 mAh, powerful configuration with Exynos 9825 used on the Galaxy Note 10 series.

Those were my first impressions of the Samsung Galaxy F62. What do you think about this phone? Please leave your comments in the comments. 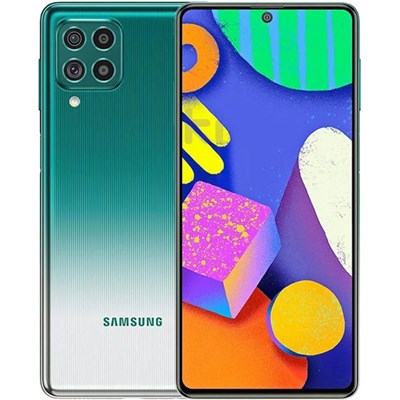 See also: Comparison of performance Xiaomi Mi 11 Vs. Samsung Galaxy S21 5G: Who will win? Boldly invite you to guess!

Rank:
Cu Bo Nguyen
Admin, nowadays, when the F 62 is not connected to 5G? Reply ● Prefer ●8 hours ago ●
?TPNguyen Tan Phong
Administrators
Hello,
This issue will be decided by the company
Share with me. Reply ● Prefer ●
8 hours agoKT
Khanh Tran

When will VN sell? Reply ● Prefer ●
8 hours agoTPNguyen Tan Phong
Administrators
Hello,
Currently, this product on my side still has no information about you, if you are interested you can often visit the website to see for me.
Information to you. Reply ● Prefer ●