Finding the truth: Is the plane really a source of virus spread with extremely high risk?


The WHO believes the risk of virus infection lies in two rows, but the reality can be very different, because passengers often do not sit still. Even so, the risks need to look back.

As airplanes became so popular, it was extremely easy for an infected person to be on the plane at the time a disease spread.

The same is true for the outbreak of Covid-19 due to the new strain of corona virus (SARS-CoV-2). At the moment, the virus has spread to more than 100 countries and territories, causing more than 3600 deaths. And part of the story that spreads the virus lies in the fact that countries can not fully control the virus infected people coming to their country.

Since the outbreak of the disease, most airports have been reviewing and scanning passengers’ body temperature to minimize the risk, even canceling flights and blocking entry for people coming from the epidemic area. But what if the sick person gets on a plane? How is the virus spread in an enclosed environment like an airplane?

To get the answer, we will have to consider many issues.

How an epidemic spreads

The basic way of spreading a disease, perhaps many of us can grasp. That is coughing and sneezing. When an infected person coughs, saliva, mucus and other fluids will splash out. If you touch it and then put your hand on your face, the chance of spreading the infection is extremely high. 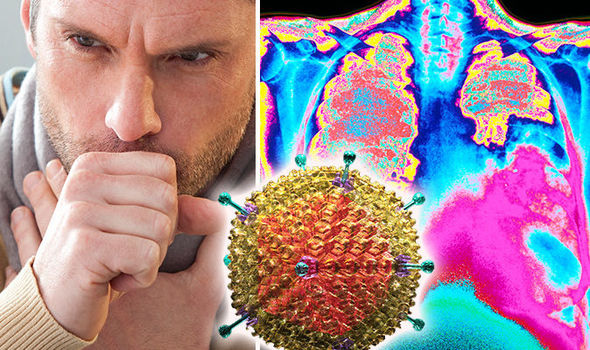 In most cases, these droplets are difficult to spread through the air and often fall very close to the coughing site. According to Emily Landon, an epidemic control specialist from Chicago Medical University (US), the common cold is likely to spread within 2m and 10 minutes of exposure.

“Time and distance have a huge impact,” – Landon said.

A respiratory disease can also be spread through objects that have been splashed onto infected bodies. The duration of infection lasts from a few hours to months, depending on the material of the surface, and what the fluid is (saliva or sputum, nasal discharge, etc.).

For Covid-19, there is some evidence that the virus is transmitted through the air by microscopic water molecules – or aerosols. However, Arnold Monto, a professor of epidemiology at Michigan University, says that is not the main mechanism of transmission of the disease.

“The probability of transmission via aerosol is not high, because the environment will dry out very quickly. The virus itself needs moisture, so it will quickly stop working when the environment is too dry.”

What about diseases on a plane?

The World Health Organization (WHO) defines a person who is likely to be contagious in an aircraft as people sitting in two rows of seats above and below the sick person. However, people may not necessarily stay still – especially with flights that last for many hours. They can go to the toilet, stretch their legs, take their food, eat … that means going through many other places.

In fact, when the SARS outbreak broke out in 2003, a passenger from Hong Kong (China) to Beijing infected people outside the WHO’s 2-row range. A study in the New England Journal of Medicine even mentioned that the WHO standard “could miss 45% of SARS patients.” 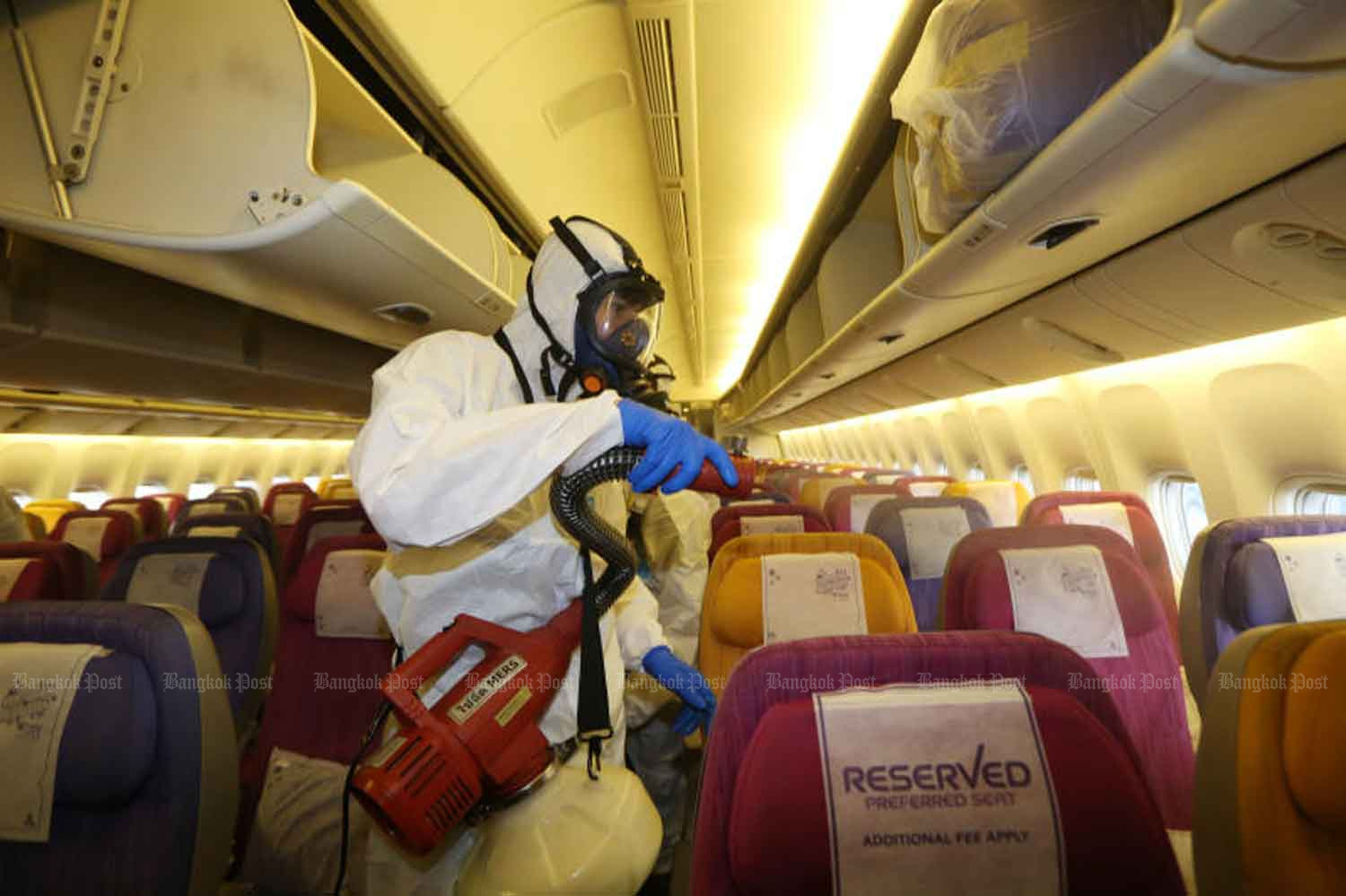 Inspired by this incident, a team of experts from Emory University (USA) decided to find out to what extent the possibility of infected passengers on the plane can infect. The team tested 10 U.S. transcontinental flights, observing crew and passenger behavior. They evaluate the movement of people, and the impact of that on the time and number of people on board.

“Suppose you were sitting in the outermost or middle row, and I went over there to go to the toilet,” – Weiss, a biology professor from Pennsylvania State University. “Obviously, we will have very close contact – that is less than 1m. If I get infected, you can be infected. And we do research to determine this.” 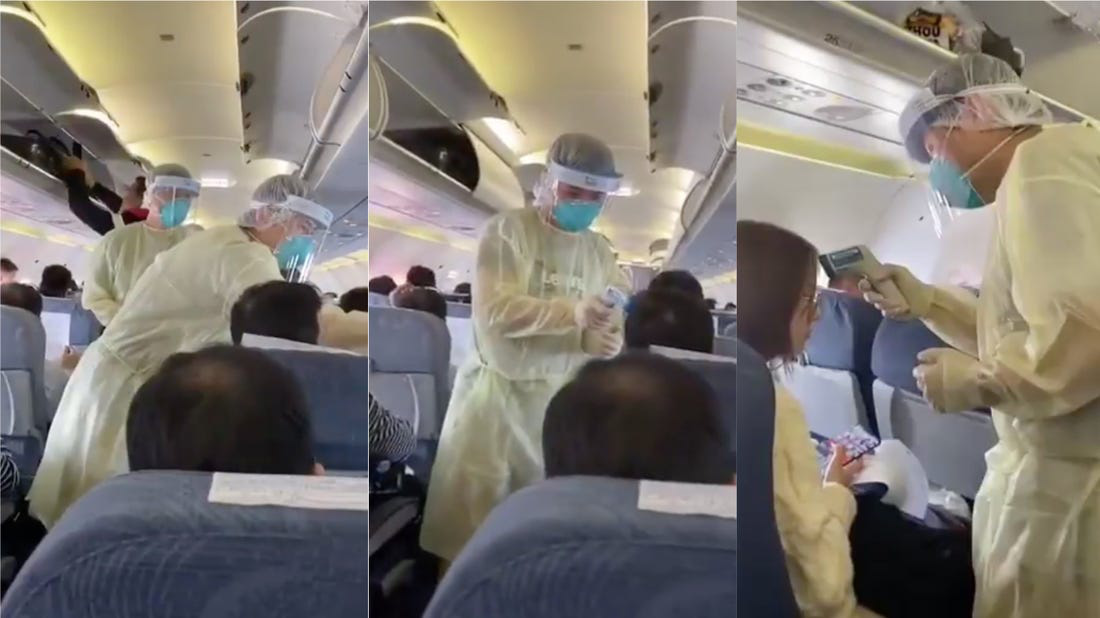 In a study published in 2018, most passengers on long flights will leave their seats in the middle of the flight – mostly toilets or luggage. In total, 38% leave a chair once, and 24% more than once. 38% sat still during the flight.

It was this observation that helped scientists determine where to sit with the lowest exposure risk. Accordingly, the people sitting by the window only 43% stood up to move, while the middle and outer rows up to 80%. 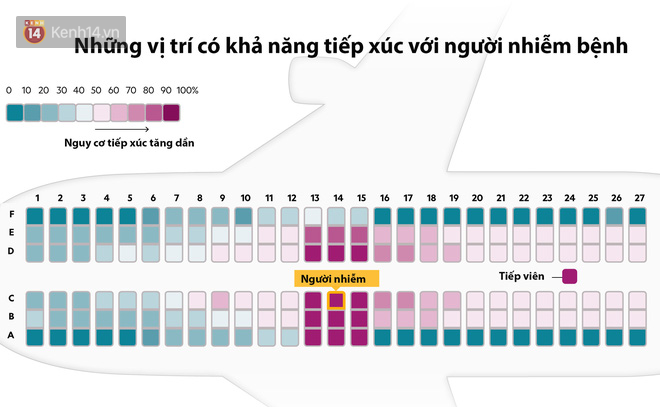 Through the chart above, it can be seen that the location near the window is the least likely to contact the sick person. However, according to the chart, the positions of the middle and the outer seats even within WHO’s “2 upper and lower rows” also have relatively low exposure rates (about 50%). According to Weiss, the reason is because most of these contact phases are for too short a time, so the impact is not much.

“If you sit in the outermost row, there will be quite a lot of people passing by, but people walk very fast,” – Weiss said. “Overall, the likelihood of spreading to them is low.” 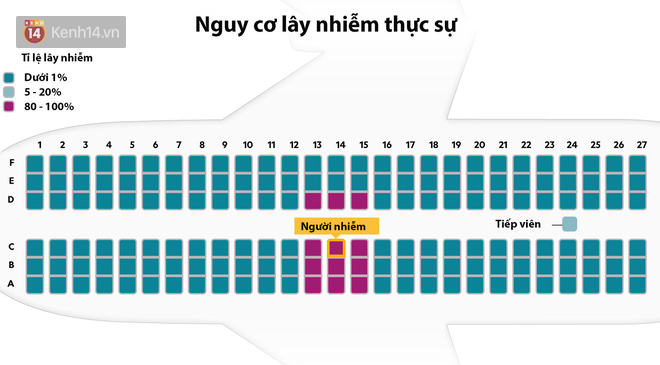 However, the story will change if the patient is a member of the crew. A flight attendant will have to travel along the cabin several times at a slow pace, interact with passengers, and even have close contact with those in need of food and drink. In the same study, a flight crew member was at risk of infecting at least 4.6 people, so airlines have always banned flight attendants from flying when their health is not good.

What about the new strain corona virus?

“We still don’t know exactly how the Covid-19 epidemic is now spreading,” Weiss said. It may be through fluid – saliva, nasal discharge, excretion (diarrhea), or maybe even aerosol. The researchers themselves said the report was difficult to apply to flights with too long time (more than 10 hours), or large aircraft with three rows of seats, for example.

Landon thought otherwise. While she agrees that we do not know how the virus spreads, she believes the results of the study are highly applicable. Most previous corona viruses (including SARS) also spread through droplets, so is Covid-19, too, since both have many similarities. 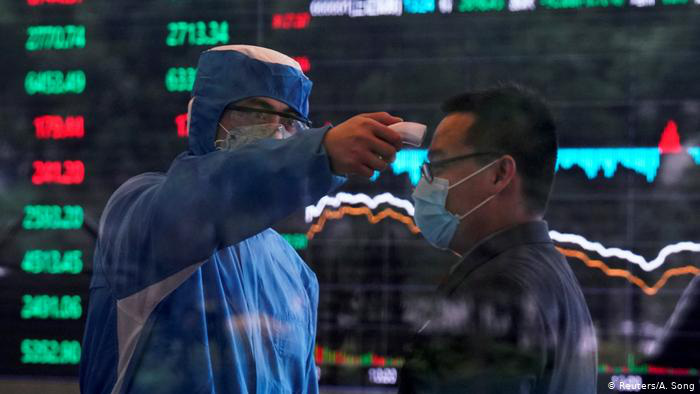 Most importantly, Landon believes that everyone needs to protect themselves while onboard, with hygienic rules issued by health authorities. For example, wash your hands with soap or disinfectant whenever you touch surfaces in public places – this is important, because the new virus has been shown to be able to survive on time up to 12 hours.