Find out about DoS attack in the Internet


DoS (Denial of Service) – Denial of service attack is a form of attack with the purpose of interrupting the service of a website or a system in many different ways. An attacker will somehow try to prevent a user from accessing information or resources from a service or website by disrupting, overloading or slowing down the system. 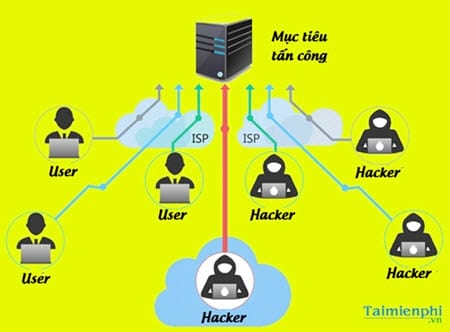 One of the most common DOS attacks is that an attacker will try to overload the system by giving a large number of virtual clients access at the same time. At that time, your access to the service will be interrupted because the server cannot process your request. Similar to this mechanism, an attacker can send a series of spam emails to your email until the limit of each mail service is reached, your email is likely to be flooded and not be able to accept. another email DDOS (Distributed Denial of Service) Distributed denial of service attack – is a common form of DOS attack due to its large extent and scope. Somehow, the hacker will gain control of your entire system to become a part of the attack tools system. Your computer will become a part of BOTNET (ghost computer network) to attack services such as banking services, send spam emails, overflow server memory …

Because of using multiple computers at the same time, this is known as a distributed denial of service attack.

Get to know DOS and DDOS

There are many phenomena that you can conclude as the result of a DOS or DDOS attack, however, not all system disruptions are conclusive as a consequence of the attack. You can refer to the following symptoms to identify DOS and DDOS:

How to avoid DOS and DDOS

Public folders that are being repeatedly requested by DDOS can create files.htaccess with file content

You need to maintain the security of your information to avoid malicious code by a number of methods:

– Install and regularly update security and anti-virus software
– Actively use mail filters to avoid spam mail
– Install and maintain firewalls on each computer, limit traffic.
– Do not provide personal email too widely on the Internet

Above is the basic knowledge of DOS denial of service attack. What to do to avoid is to always update your security knowledge, network security, protect yourself against information security risks, update the fastest new technologies in both hardware and hardware. soft to anti-DDOS system. In addition, you should also regularly check and remove Trojans manually and update anti-virus software to protect your computer.

https://thuthuat.taimienphi.vn/tim-hieu-tan-cong-tu-choi-dich-vu-dos-trong-mang-internet-22562n.aspx
Currently, there are many anti-virus software to help protect computer 24 / 24h such as Bkav, Kis, Avas … depending on the computer configuration, users can download and use anti-virus software for their computer. .