Synopsis Tatsuka Fujimaru was invited by Chaldea, a human resources continuity guarantee organization, in anticipation of master aptitude.
He meets a quiet girl, Mash Kyrielight, in the facility of Chaldea, which he visited for the first time.Quote-Wikipedia

The original is a social game.
The work aired on New Year’s Eve 2016 and is now on DVD.
Directed by Hitoshi Namba and produced by Lay-duce. 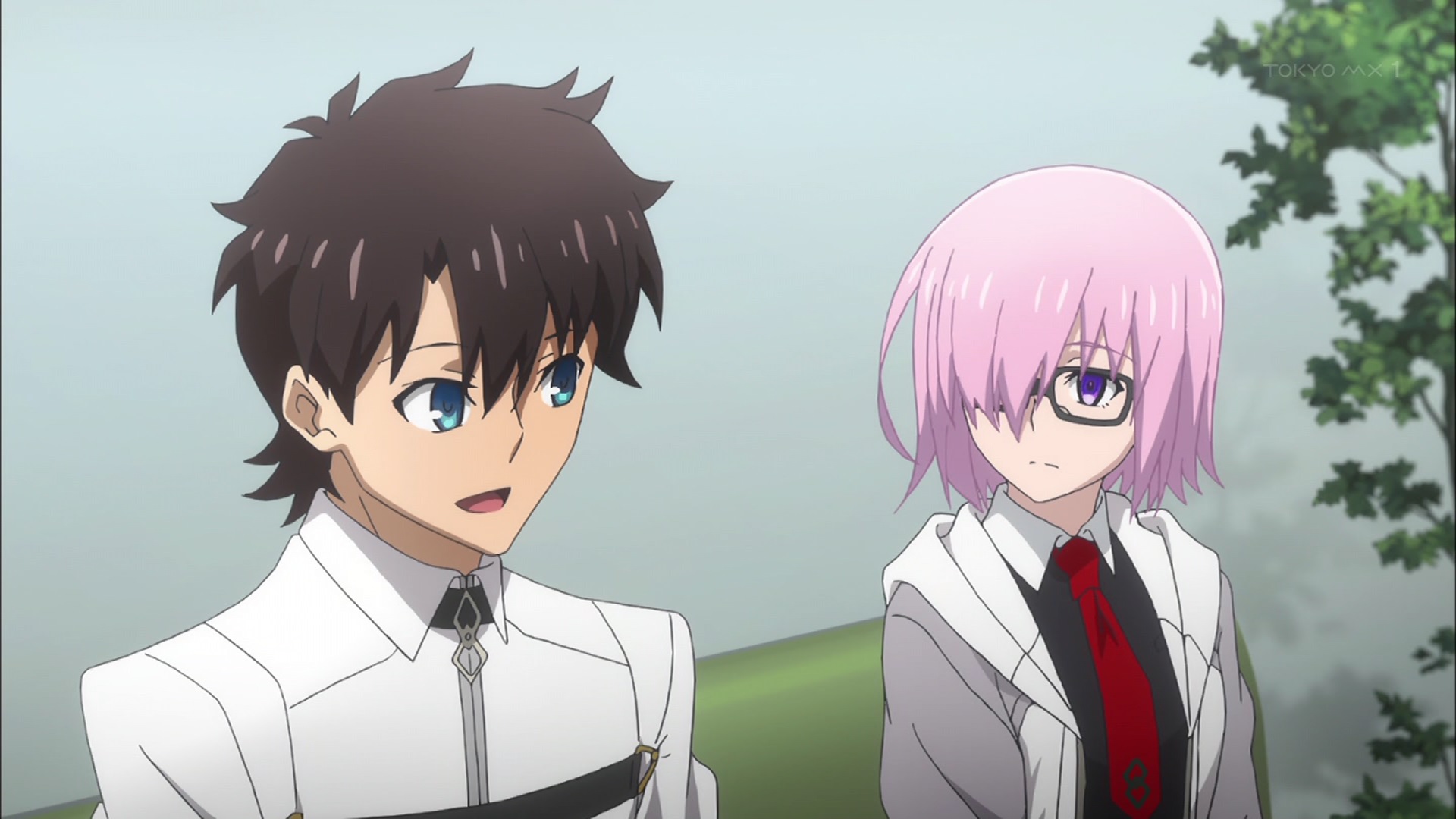 Speaking of the Fate series, it is often an animation in the production of Ufotable,
It is often drawn with high quality drawing.
However, this work is Lay-duce, not Ufotable,
Obviously the quality of the drawing is not high.

It’s not bad if you look at one picture, but
There are many parts that are worrisome when moving as an animation,
For those who see a lot of beautiful drawings in the “Fate series”
Many people will find that the quality of this drawing is not enough.

I heard the story! Mankind is extinct! 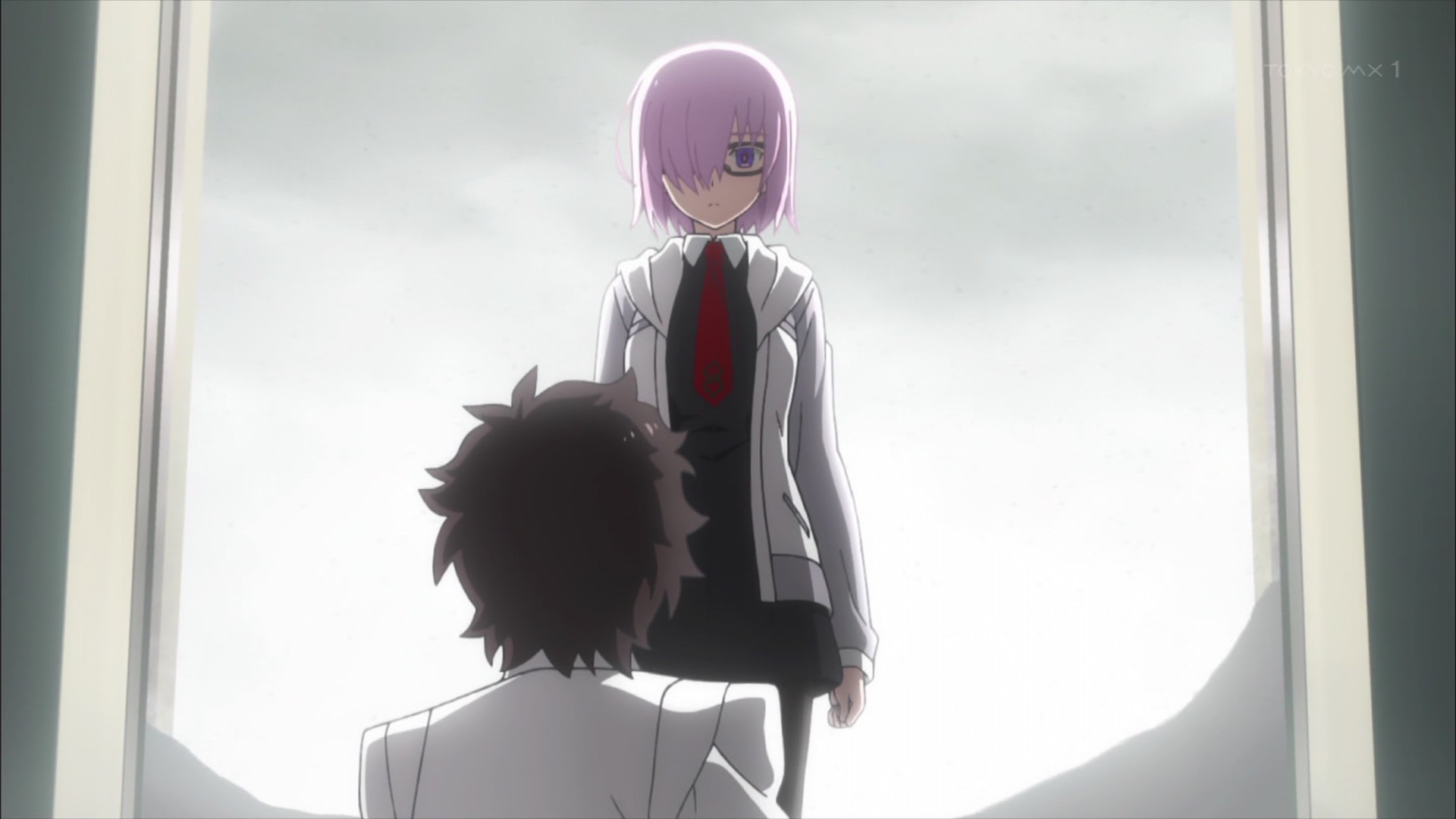 This work is an animation of the prologue part in terms of the game,
Because of that, there are many explanations of “terms” and “world views.”
Simply put, it was established to prevent the decisive extinction of humankind.
By the special agency “Chaldea”, such Chaldea
It turns out that humanity will be extinct in 2017.

To prevent such extinction and to change the history that is the cause of extinction
Visit in the past. Often replaced with terms specific to this work,
For example, time slip is paraphrased as “ray shift”.
There is a part where the explanation is confused by replacing the term.

If it’s the original game, the part that you can read easily
In anime, you have to read aloud with “line”, so
The heroine “Mash” is the hero who knows almost nothing
There are many scenes to explain, and I get a slight impression from the beginning.
It’s the beginning. 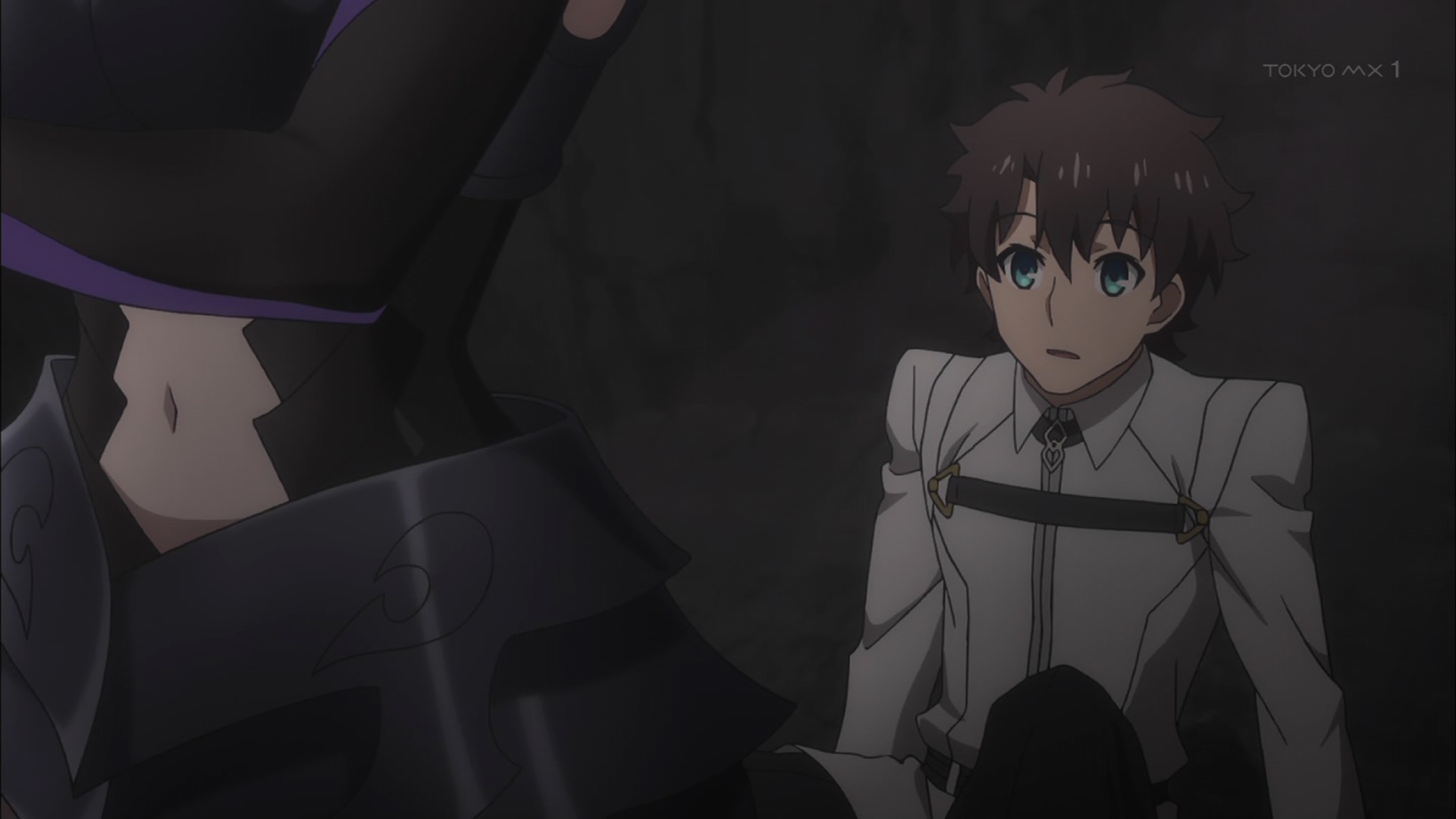 The protagonist is one of the convened master candidates
He is an amateur in the general frame and is removed from the first mission.
However, when the first mission started, an “accident” occurred and
Although many masters die, the ray shift does not stop,
The hero intervenes in human history as the last remaining master.
The story begins to move from that place.

For those who have seen the Fate series in Fuyuki City in 2004
A “familiar” servant on the “familiar” stage
Despite being puzzled by the crazy situation in the absence of the master
We will search for the cause of the extinction of humankind. 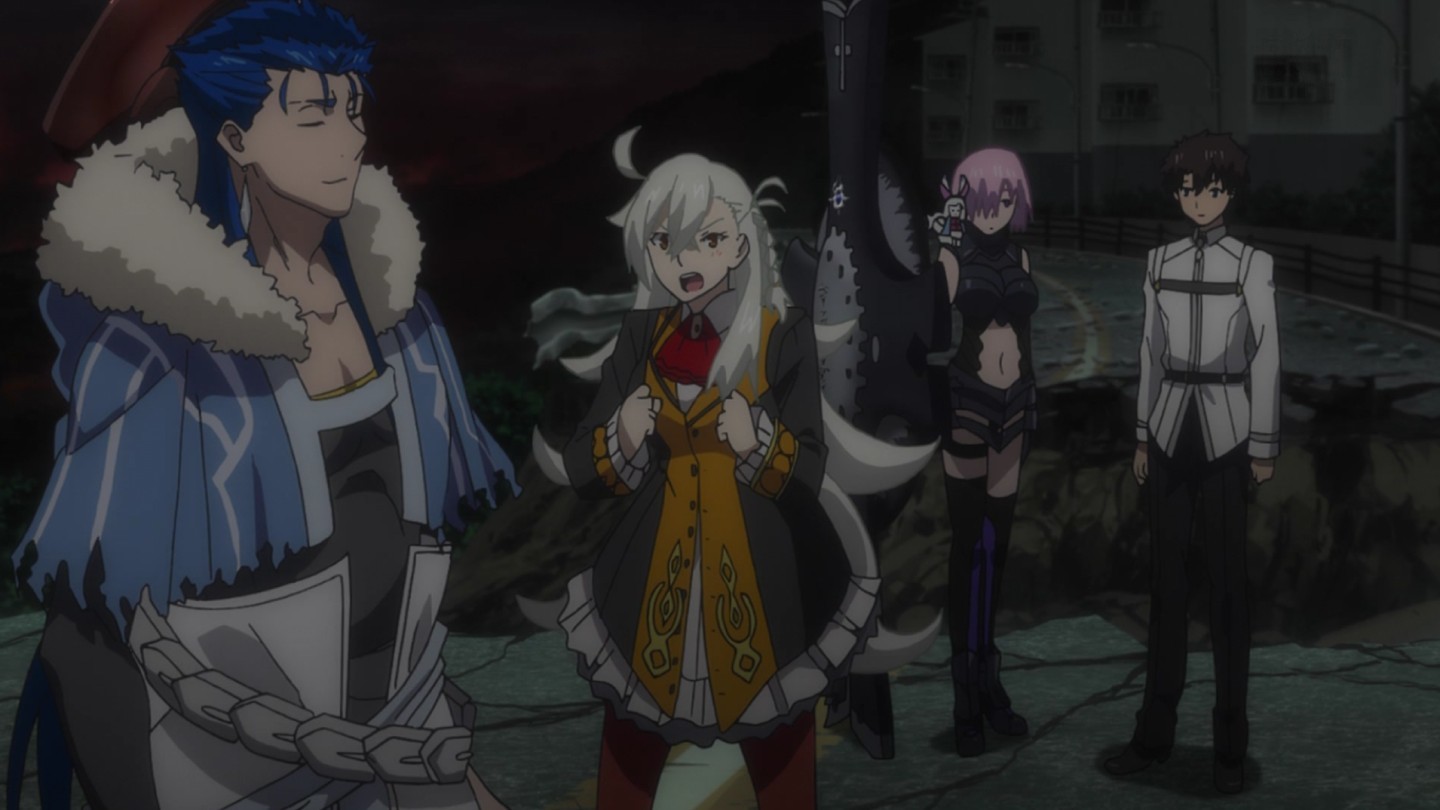 Due to the specifications of the original game, the main character who is the player is basically
You can only tell the servant,
He himself cannot fight with magic or weapons.
Although the original system is a unavoidable part,
I didn’t even give any instructions in the anime.

Servant becomes an ally on the way and is the only master
Although he says he will leave the instructions to the “hero”
He is not doing anything. If you look at it, the battle is over.

To the last introduction

It is interesting that familiar servants appear more and more as enemies.
Especially this time with Cu Chulainn who is summoned as a “caster”
The battle of “Archer” is, in a sense, the biggest excitement of this work,
Isn’t it stronger than when I was a lancer?The battle scene that I think
Combined with the production, it has a solid appearance.

However, the story is just an introduction,
It is a prologue and ends with various mysteries studded with it.
Our battle is about to end.

Overall, it’s a safe workmanship. In a scale of about 70 minutes
Although there are many parts that are in full bloom in the explanation of the basic world view and settings,
With a crisp story and the appearance of a familiar servant
The battle is exciting as it is, and our battle is about to begin
The ending story is neatly organized.

Conversely, for those who have knowledge of the Fate series and are also doing the original
It’s an anime that you can enjoy. I can’t deny the part for fans,
As a whole, it fits in a safe workmanship. 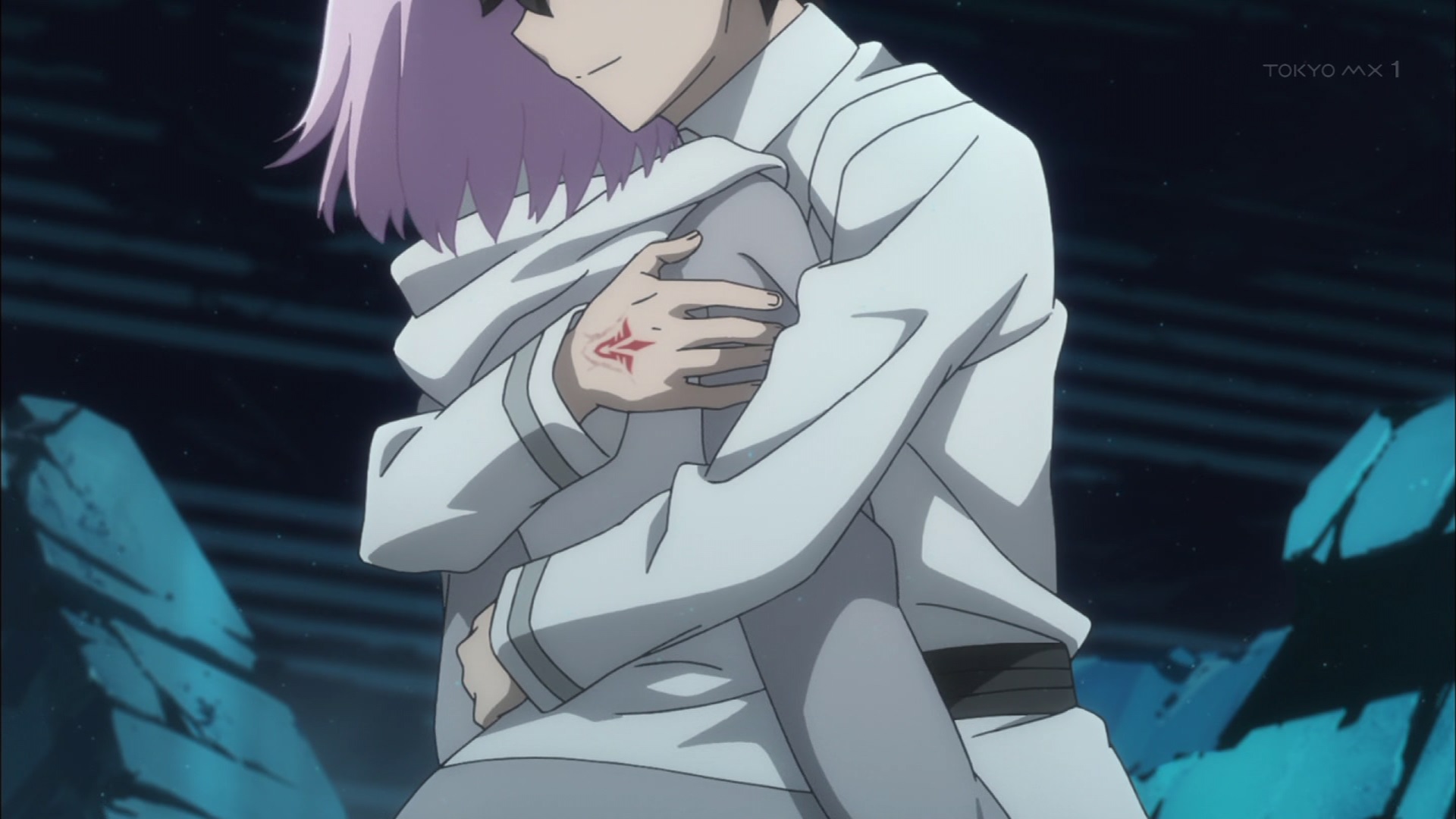 Although FGO is popular, animation is a mystery,
After this, what was animated was the part between the first and second parts,
After that, Chapter 7 was made into a TV animation, and Chapter 6 was a movie.
Chapters 2, 3, 4, and 5 are not currently animated.

If it is properly animated from the beginning, whether it is a movie or a TV animation
I think it’s a little easier to incorporate new layers,
In a sense, this difficulty of sticking seems to be the Fate series.
Maybe I can say that.