Synopsis “Nanohazard” that brought about the collapse of ground civilization from the runaway of nanomachine technology[3]The earth has been abandoned by. 98% of human beings have abandoned the earth and their own bodies, and have come to live in the computer world “Diva” as data.Quote-Wikipedia

SF robot anime that is too orthodox

This work is an original anime movie work released in 2014.
Directed by Seiji Mizushima, written by Gen Urobuchi, and produced by Toei Animation. 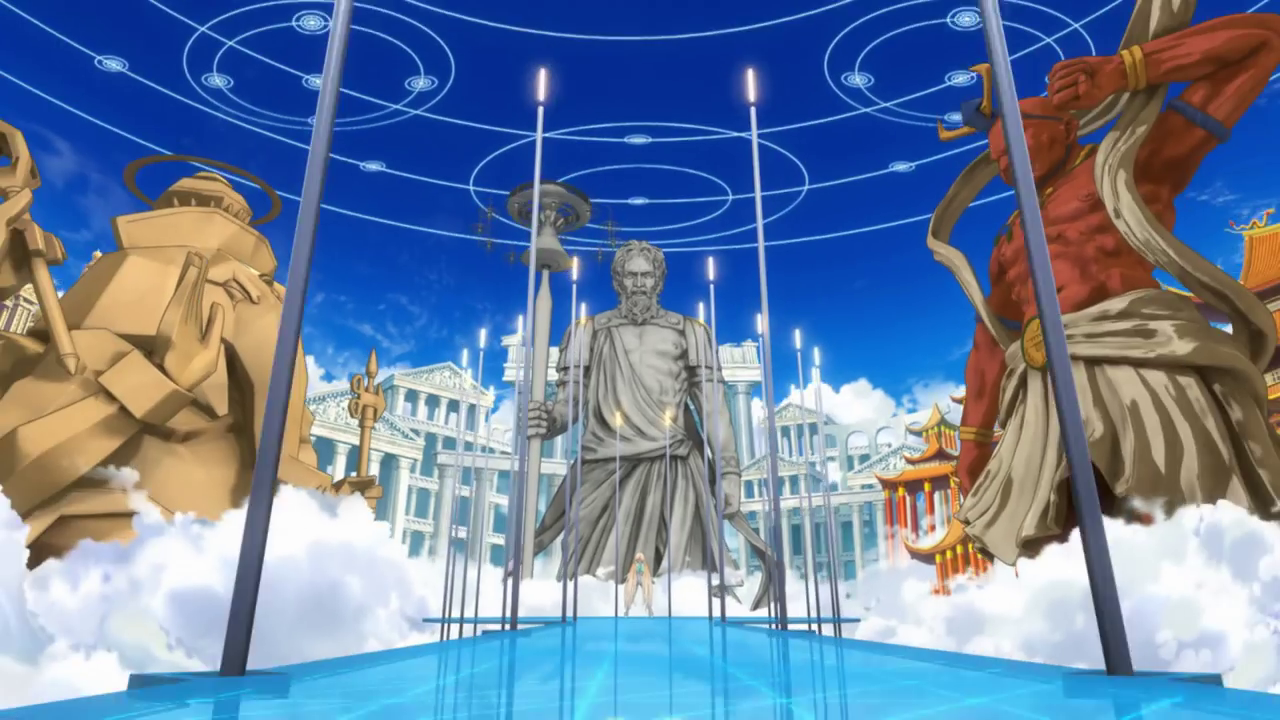 Such a world has been hacked from the “real world”.
2% of humans living in the real world.
Who is hacking the computer world for what?
The main character is “system security personnel”.Originally insubstantial she got a living body
The story begins when you land in the real world.

Another creature is evolving and prevailing in the world where humanity has disappeared.
“Robots” are the means to fight such creatures. 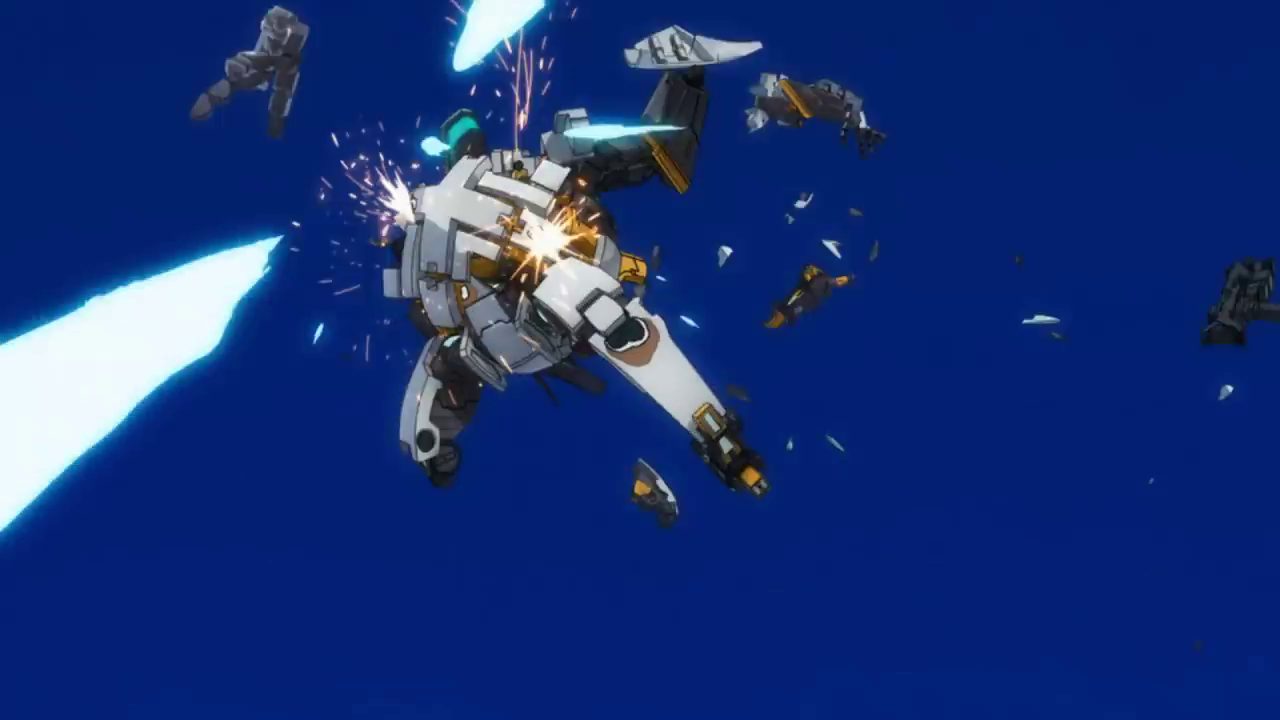 It is a robot design that maintains its roundness from a round sphere.
In a word, it is “rugged”, but it is also a cute aircraft,
Although it is drawn in 3DCG like the character,
Its ruggedness and roundness naturally make you feel “weight” from the appearance.
Because it is set on the earth, it is directed to make people aware of “gravity”.

However, such Arhan is easily dismantled (laughs)
“Eh? Wasn’t this work a robot anime?”
It is unheard of for an anime in which the main character is dismantled in the early stages.

I can’t see what will happen to this work. 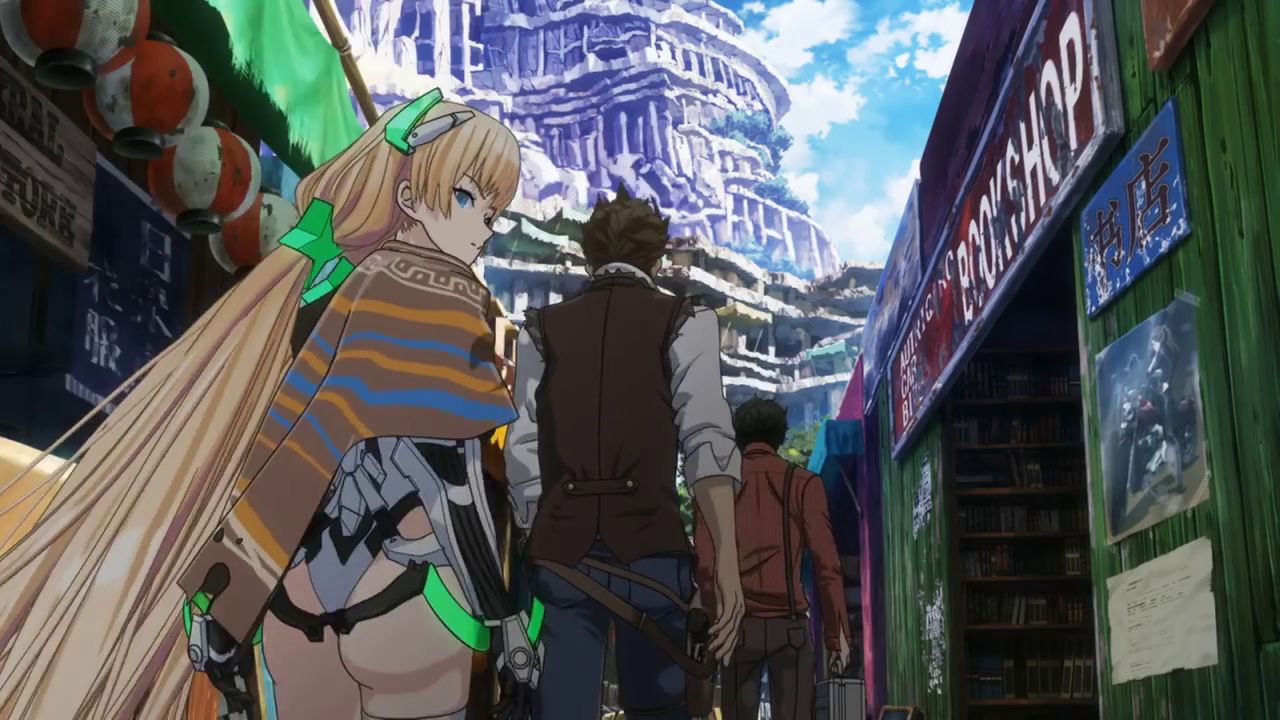 The hero has lived in the cyber world since 1300 hours after he was born.
I have enjoyed the pleasures, food, entertainment, and life that I enjoy in the cyber world.
However, even though she has a mission, she descends into the “real world.”

Feel the weight of gravity with your body, breathe in the dusty air, and check the taste of sand.
The food is also tasteless. She didn’t ask for meat when she recommended it,
I even feel embarrassed by the old “rock” that flows by car.
She sees below the reality that she experiences for the first time.
Recognize the “inconvenience” of the real body.

With myself living in the electronic world and those living in the real world
Which is “human” and which is “happy”?
When the hero who has lived in a “basket” called Diva knows the outside world,
She discovers new possibilities.

What this work depicts is philosophy. 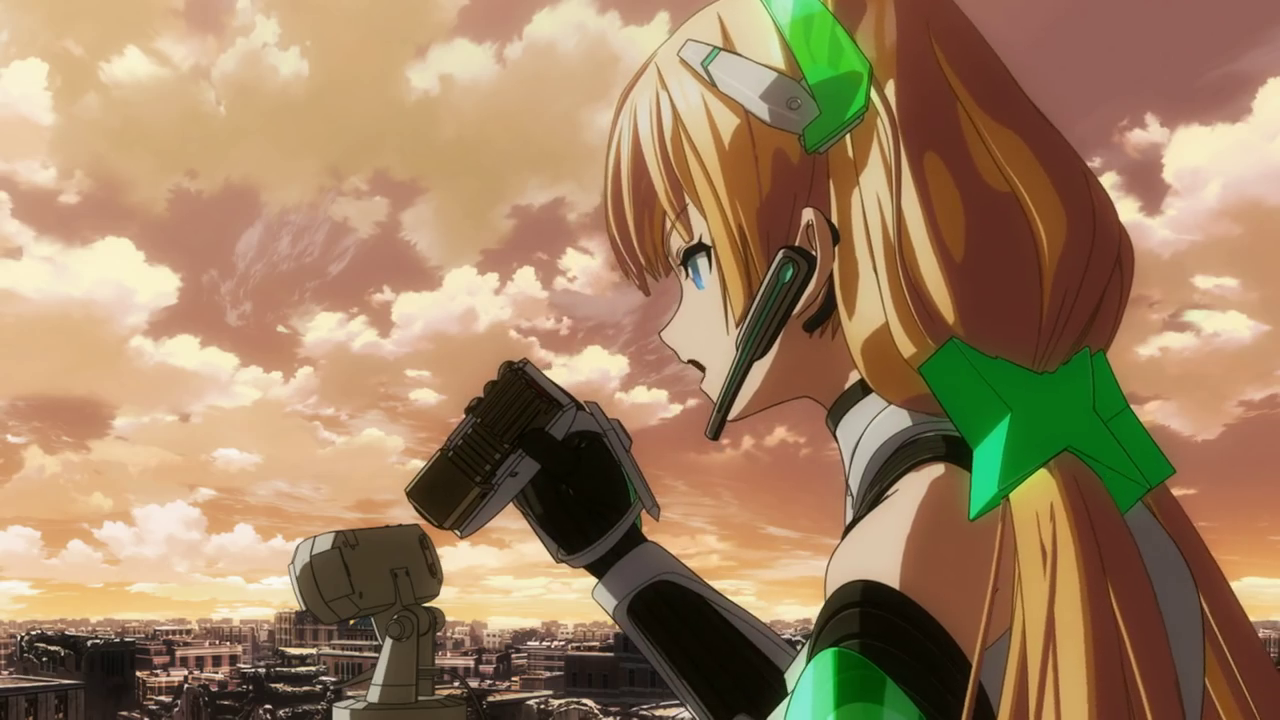 While searching for a hacker, it is discovered that the hacker is the AI ​​that generated the ego.
His purpose is to put mankind on a spaceship and travel to outer space.
The earth is uninhabitable, which is why it is a journey to find a new planet to live in.
He who should have been AI generated “ego” in the real world, understood music,
I understand people.

Certainly, the electronic world “Diva” may be a paradise.
However, he is also a controlled slave. She is no longer a slave.
That’s why I face my teeth. Because he seeks freedom, he rebels against the binding of paradise.
Because I saw human beings in the real world who live freely
It is because I met AI with an ego that I can make a difference in my own way of life.

She is no longer tied up and seeks freedom because she doesn’t want to be tied up. 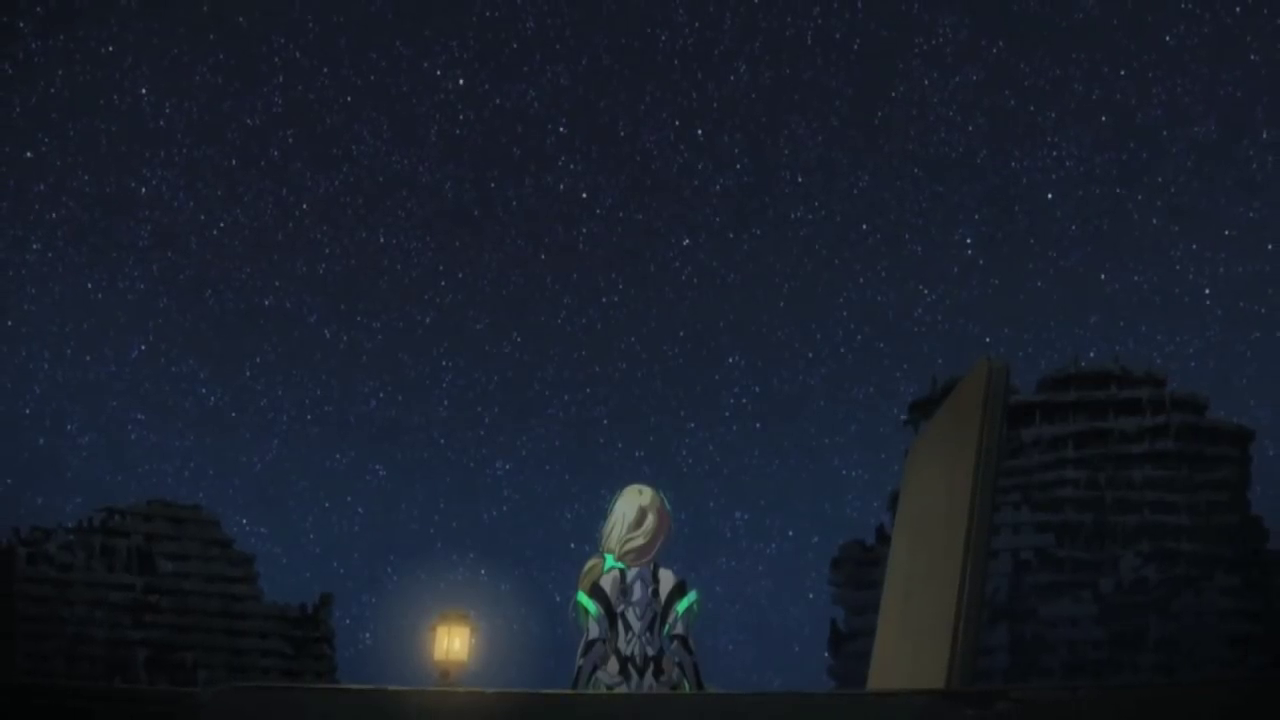 Show the battle scene that makes you feel the gravity of the ground at the beginning, and at the end of the universe
Show a high-speed battle scene because it is “weightless”.
Avoid attacks from the aircraft brilliantly, wrap around and shoot bullets.
The battle scene drawn in a comfortable flow is a battle scene that feels good to see.
From there, it descends to the earth again.

The next partner is my former colleagues.
The same sheriff as the main character surrounds them with the same aircraft.
It can’t be helped because of the scale of 1 hour and 40 minutes,
There is almost no digging into other characters except for the three main characters,
Originally, it should be okay to delve into the character of her colleague, but it’s a shame that it doesn’t exist.

However, even so, the battle scene at the end of the game can only be called Seiji Mizushima.
The battle in the “urban area” takes advantage of the land and overturns the insurgents.
By moving the robot by that amount without moving the camera unnecessarily
Eliminating the “sickness” that tends to occur in 3DCG, the hero who wears a sexy suit
The expression of agony when fighting and the appearance of the robot are alternately projected to liven up the battle scene.

The appearance of the aircraft, which is damaged by many attacks, emphasizes the beauty of the robot.
However, after all the digging other than the main character is sweet,
It’s a pity that we didn’t get excited one more step. 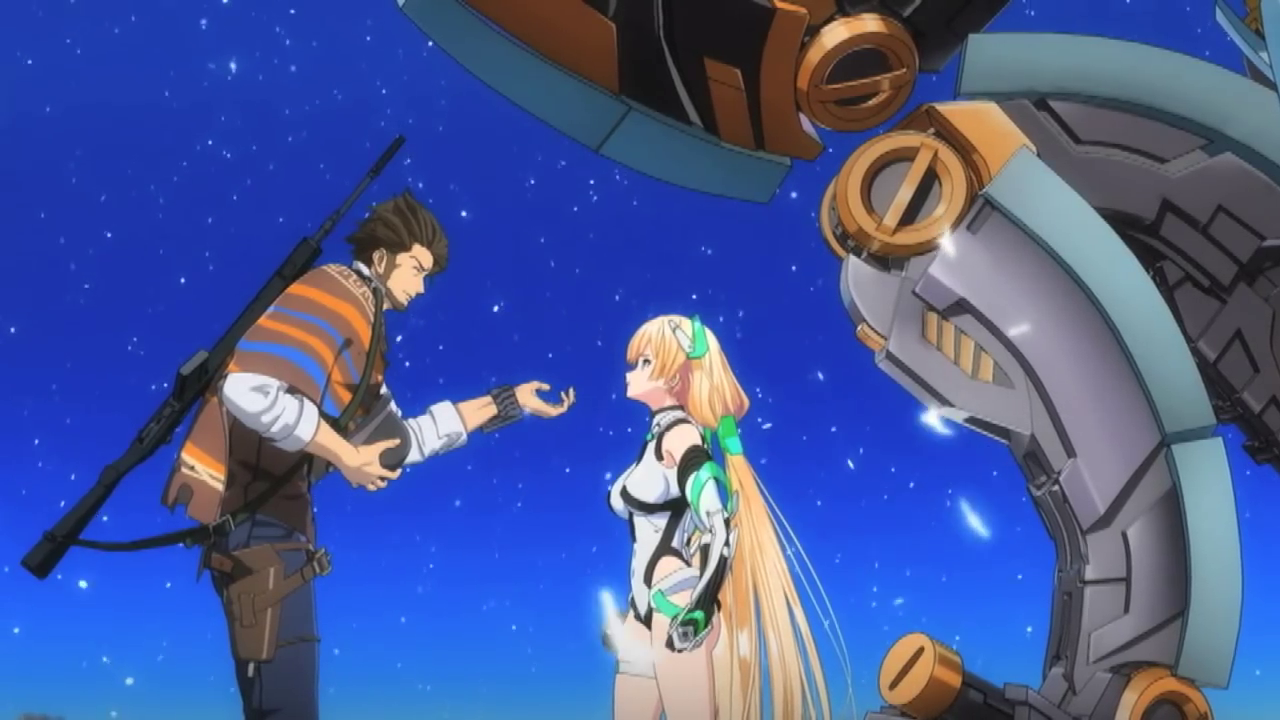 Overall, it’s a very serious sci-fi robot anime. World view drawn in full 3DCG,
By making it a cell look, the discomfort of being 3DCG is erased,
Smoothly moving characters and robots, and small changes in facial expressions are worth a look.
Although the battle scene of the robot is few in the first and second stages,
It has different charms from sandy areas, space, and urban areas.
It shows the robot battle firmly.

However, on the other hand, there are many parts that lack excitement.
Since I lost the robot once in the early stage, there are few battle scenes by the robot,
There is a road movie-like nuance that travels the abandoned earth while searching for hackers,
Although the development itself that the hero thinks about the cyber world and the real world is good,
There are many parts that are a little light.

There are few main characters, and there are many characters that suddenly appear at the end of the game,
It ended with almost no digging or appearance of the character.
Although the battle scene itself is good, the digging of the character is other than the main character
The impression is that the story didn’t have “thickness” because it was neglected.

The story itself is something that came from science fiction works such as “Masamune Shirow”.
The freshness is light.I don’t really feel that the script is like Gen Urobuchi
Although it is a well-organized, orthodox and straightforward work,
It was a work that made me feel that I wanted something that would go through something one step further.
To put it simply, it may be easy to understand a work that has become too cohesive. 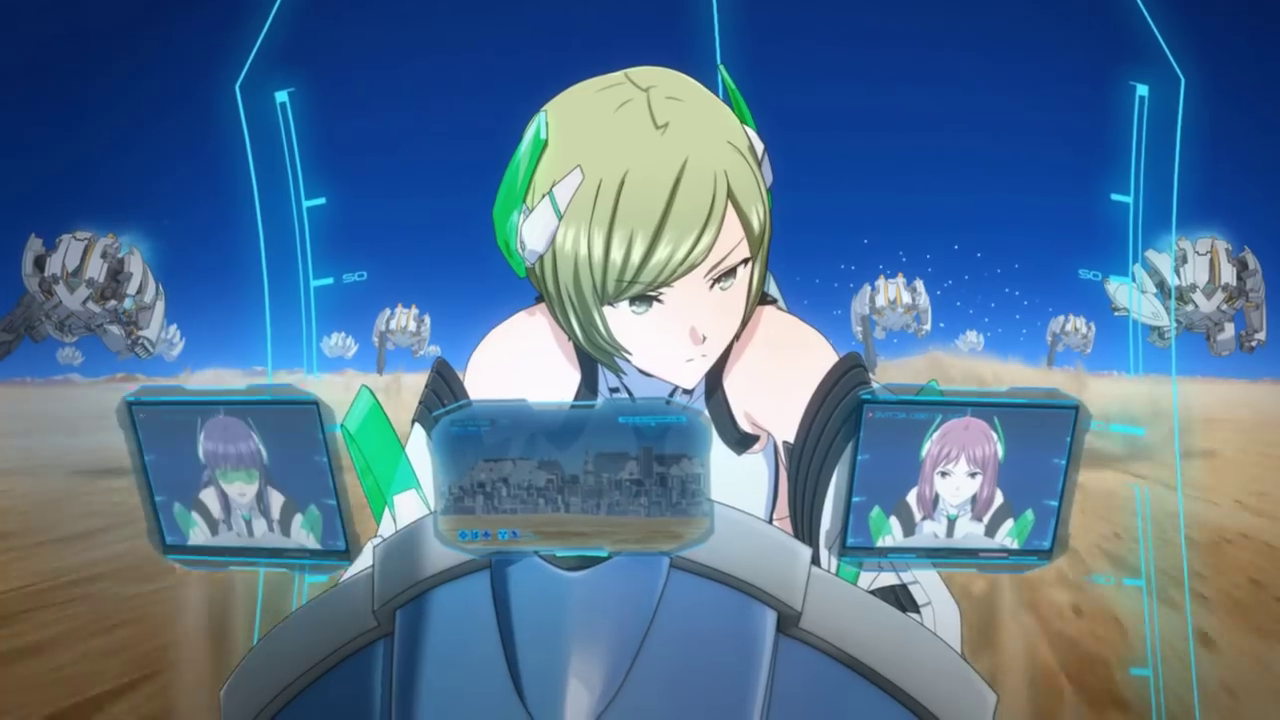 The result of 3DCG itself was very good, and although it was a cell-look and natural picture,
While I want to evaluate the quality itself honestly,
The story was still unsatisfactory.
Although the battle scene burns, it is still because there is almost no description of “enemy”
The most disappointing point may be that it didn’t burn out.

Rie Kugimiya, Shinichiro Miki, and Hiroshi Kamiya are appointed as the voice actors of the main characters.
There is also a part where the character is attached by the voice of the character,
On the other hand, Megumi Hayashibara, Minami Takayama, and Kotono Mitsuishi were appointed as a little role.
It’s a little disappointing to use a little too much role that there is almost no turn.

Anyway, “Rie Kugimiya” VS “Megumi Hayashibara” and “Rie Kugimiya” VS “Minami Takayama”
I wanted to see a hot fight and a conversation.Even though the pilot was also depicted in the final battle
It’s a bit unclear that there is no interaction during the battle.
In that battle, there was a question and answer about the recognition of “the cyber world” and “the real world”.
If it leads to that ending, the impression of this work may have changed significantly.