Affordable price, good performance in tasks and beautiful RGB LED system, those who love the design of TeamGroup’s T-Force RAM line will have almost no reason to wonder whether to “down” money” buy Delta or not.

RAM with RGB LEDs is nothing new, but if you want something more special, the TeamGroup T-Force Delta is a good candidate with a 120-degree viewing angle LED strip, especially if the flagship RAM kit T- Force XTreem that VnReview once evaluated is out of your budget. Currently, T-Force Delta has many options in capacity (from 8GB to 64GB) and clock (2666 to 3600 MHz). In this article, VnReview evaluates the T-Force Delta RAM kit 32GB (2 x 16GB), clocked at 3200 MHz, timing CL16-20-20-40 at 1.35V. The reference price of the RAM kit is 160 USD, equivalent to 3.68 million VND. 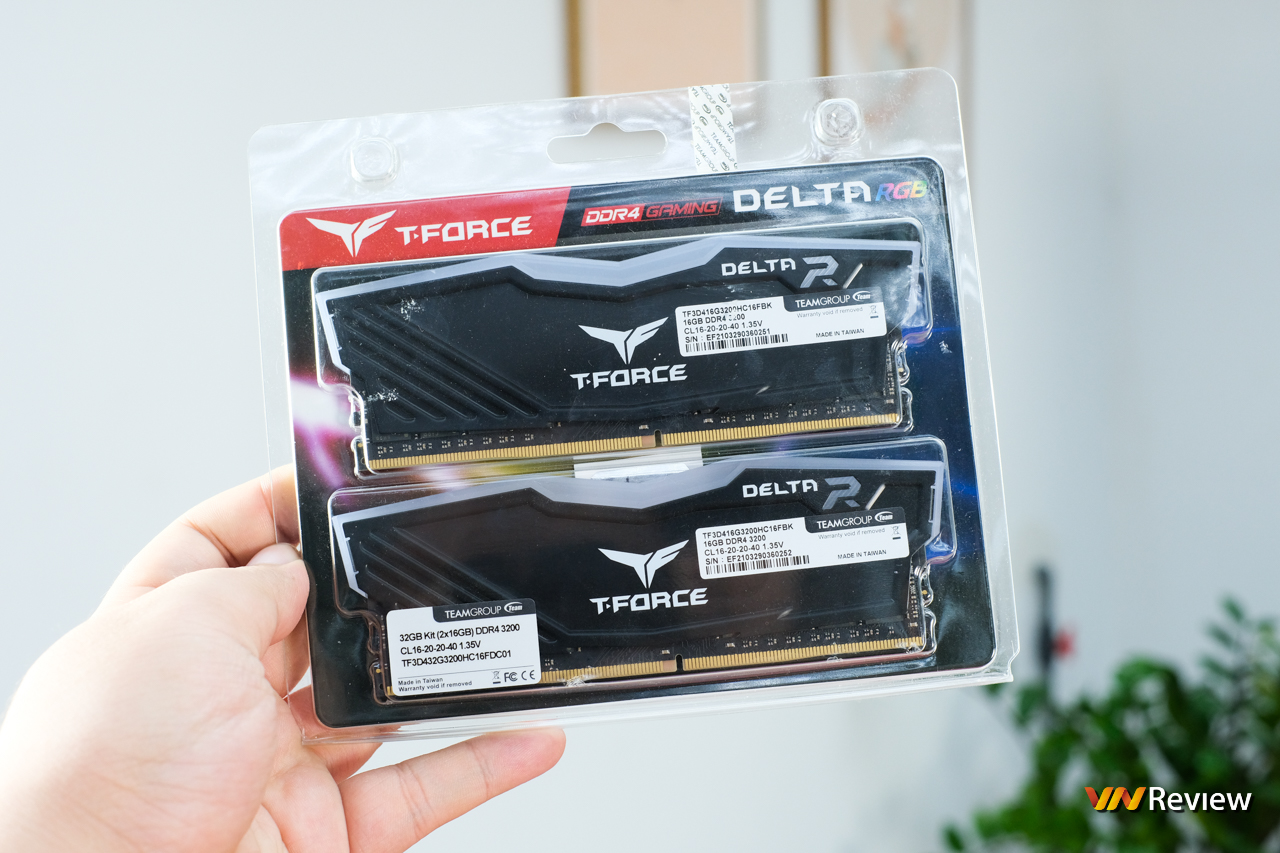 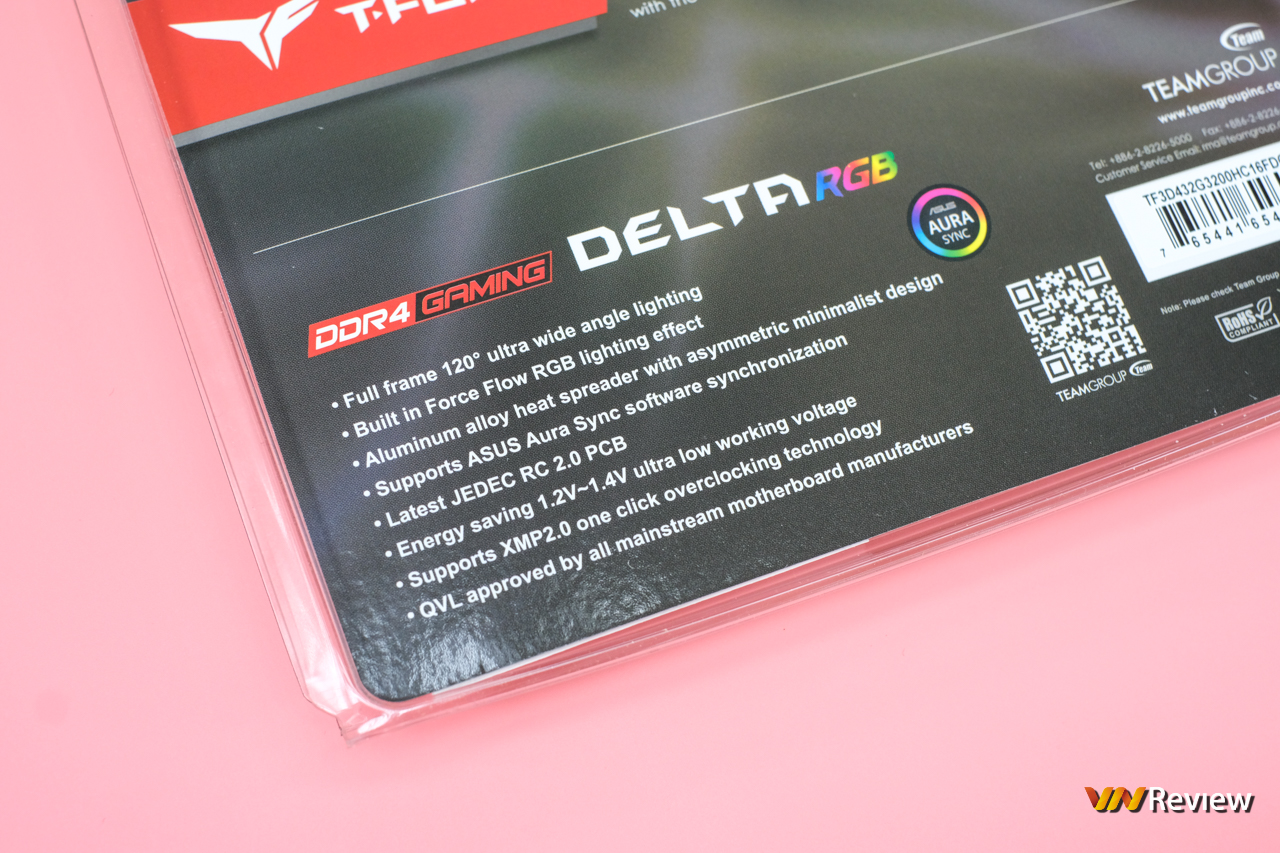 T-Force Delta is wrapped in a transparent protective plastic package, “showing off” its entire front design. The bottom corner is a sticker with the parameters of the RAM kit, here is 32GB capacity, 3200 MHz clock with timing CL16-20-20-40. Information about TeamGroup and the “T-Force” concept, as well as T-Force Delta highlights, is printed on the back. 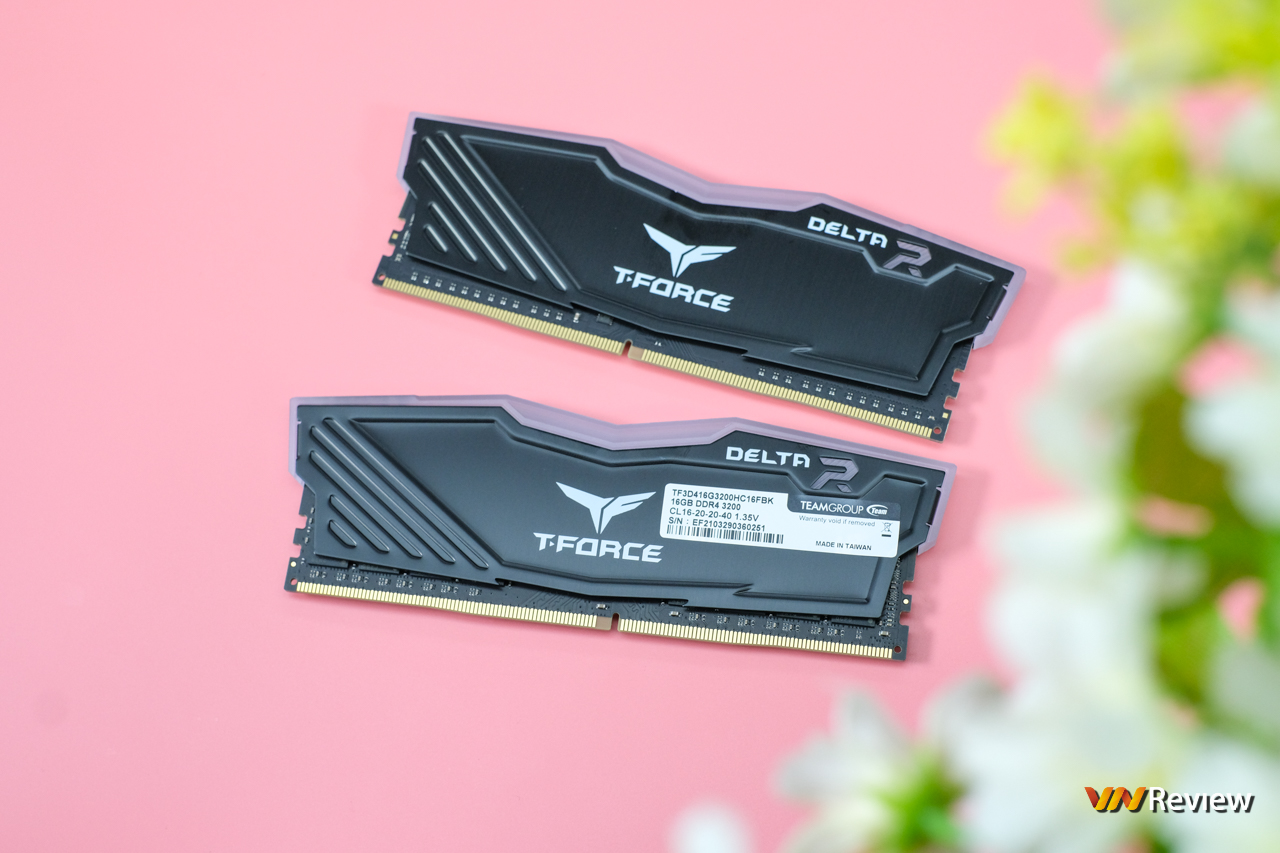 Overall, T-Force Delta is designed in the form of “wingspan”, sharing many similarities with other RAM products of TeamGroup’s T-Force line. In addition to black, T-Force Delta also has a white version with a slightly more expensive price. 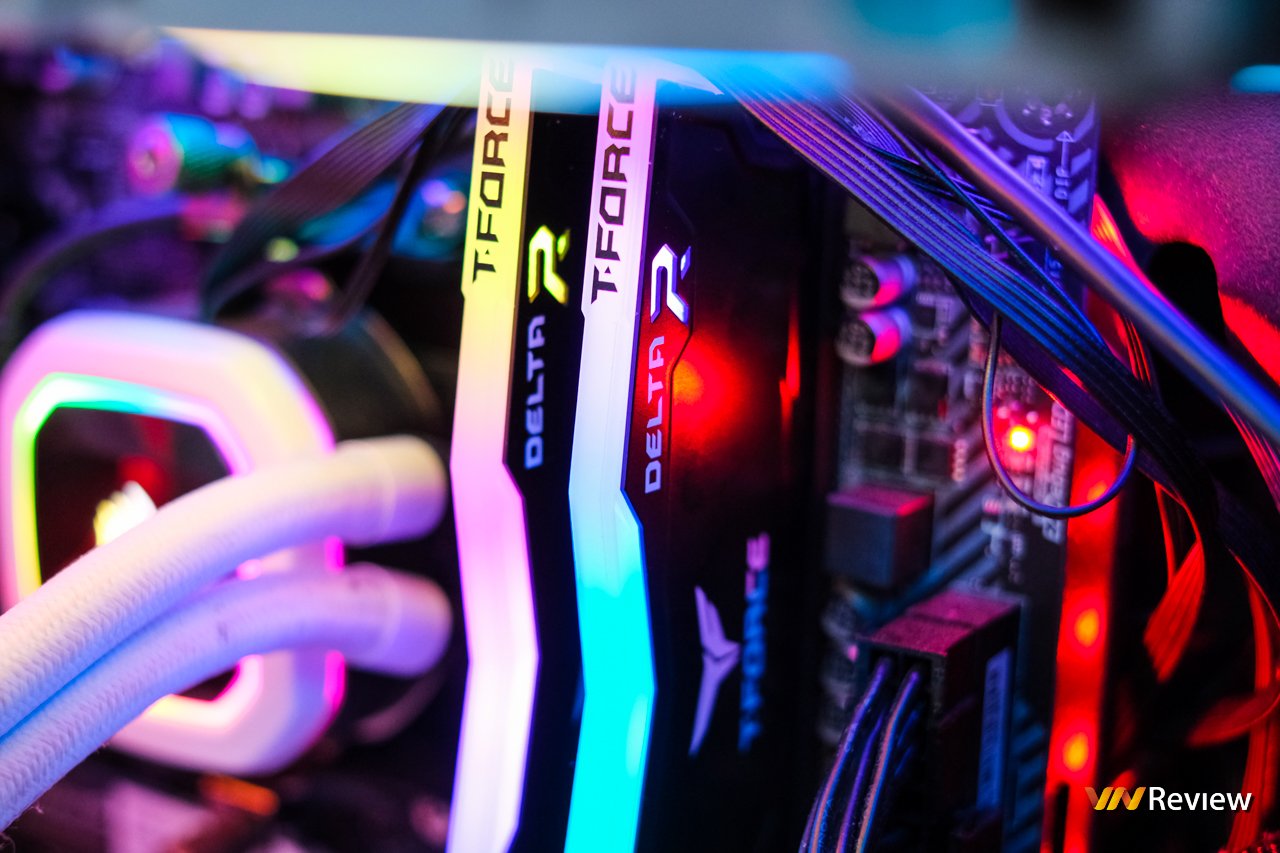 The “R” part (short for “Revolution”, not the number 2 as many people mistakenly believe) is laser cut, will glow with RGB light strips, a good way of TeamGroup to create accents for the RAM kit. The TeamGroup logo in the center of the RAM bar will also glow when active. 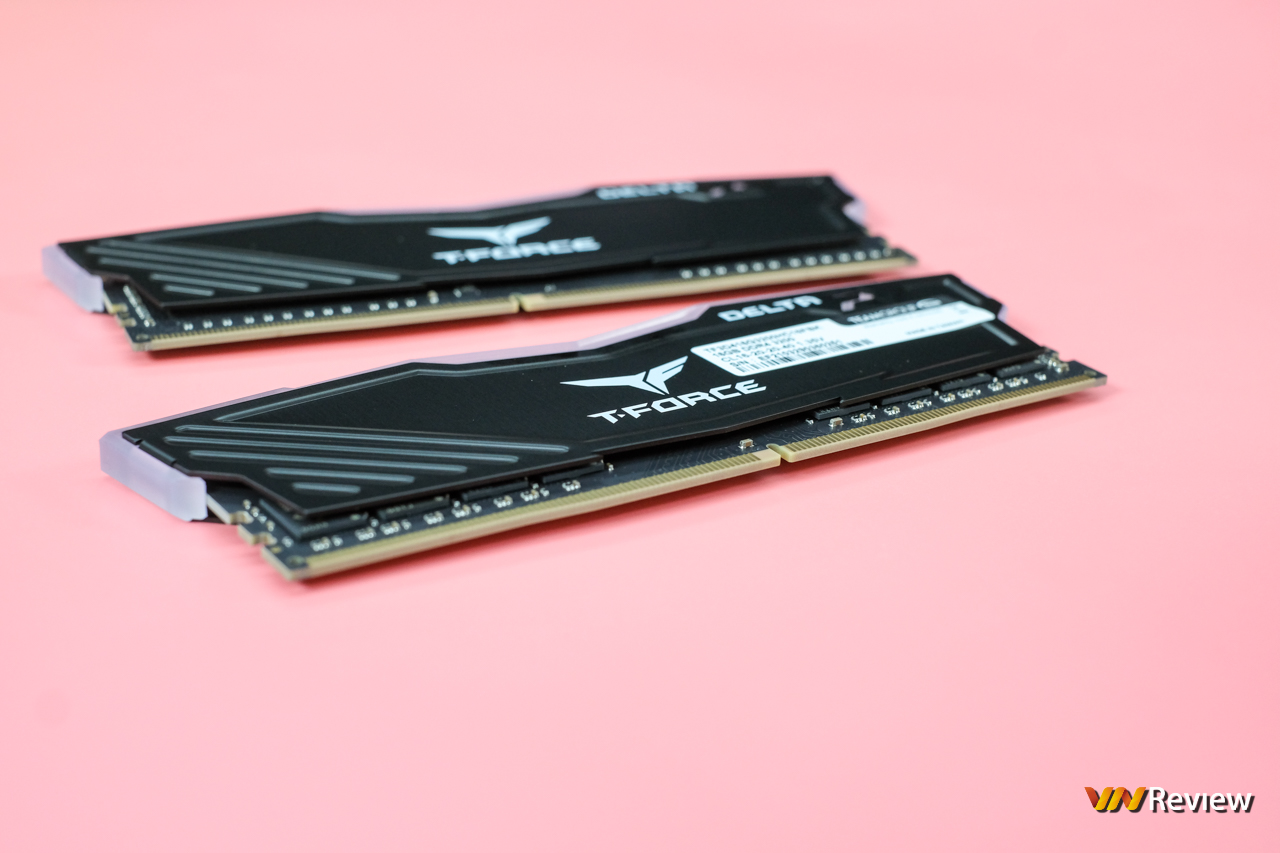 The T-Force Delta’s aluminum heatsink layer is glued very tightly, so the writer will not remove them to “look” at the chip underneath because there are no suitable replacement parts. Although the black color is rough, it clings to sweat and stains, perhaps the white color will be better. 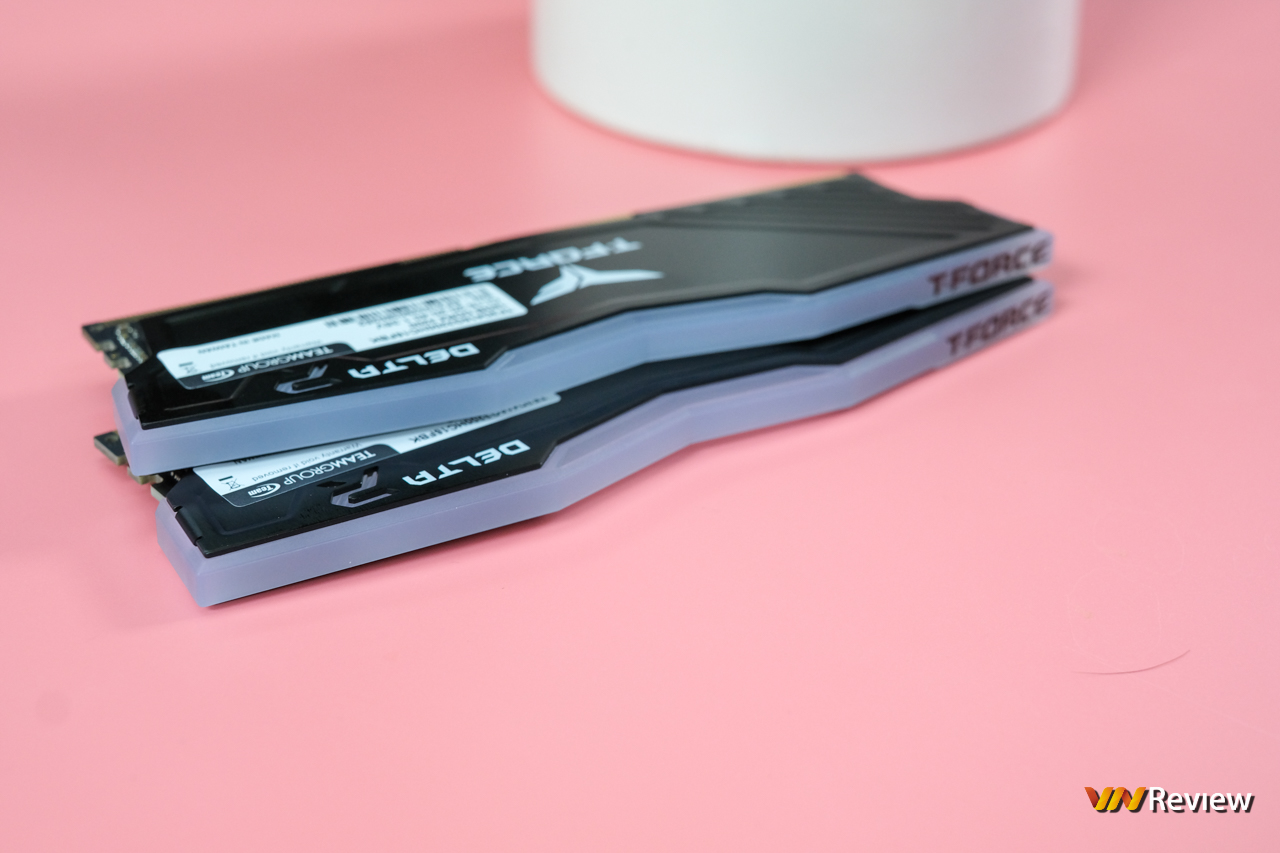 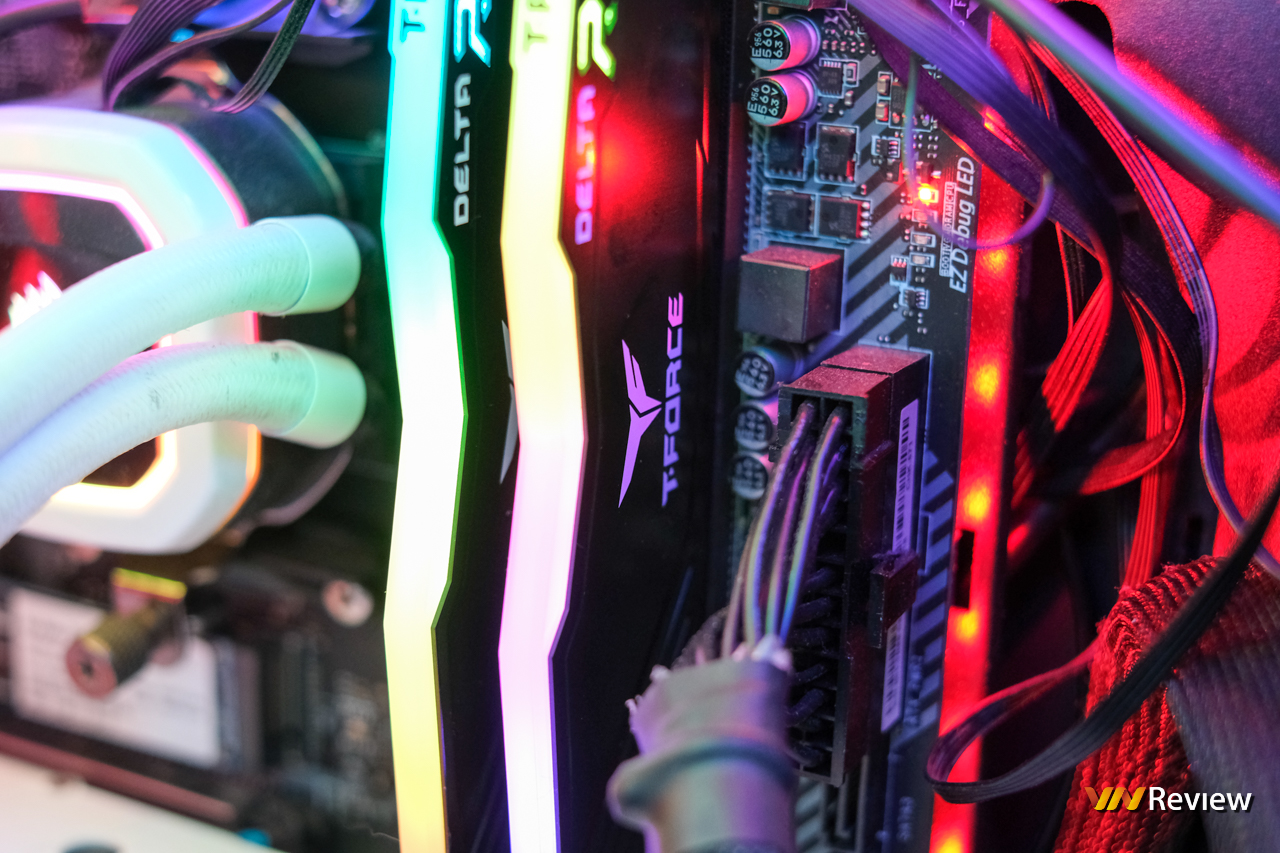 T-Force Delta’s “wingspan” RGB LED strip for a 120-degree radiating angle, spanning the entire RAM stick and covering both ends, is bright but not harsh, the light is evenly distributed. Although designed to synchronize with Asus’ Aura Sync, in fact, T-Force Delta can now be customized and synchronized with all other major platforms such as MSI Mystic Light, Gigabyte RGB Fusion, etc. 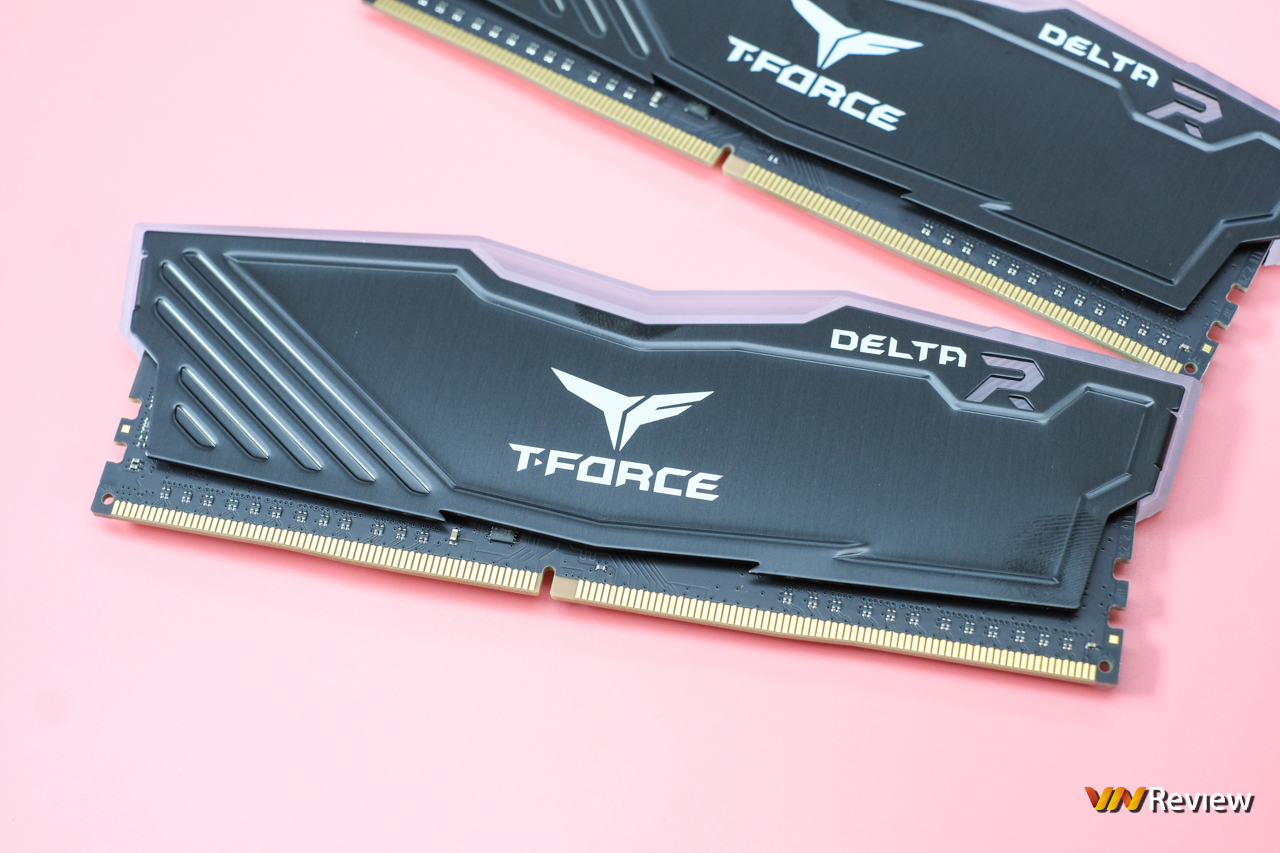 T-Force Delta is equipped with JDEC RC 2.0 custom board, increasing the distance between source and signal layers, helping to increase signal latency by 35%. Supporting XMP 2.0, users can overclock to 3200 MHz, CL16-20-20-40 with just one click in BIOS. By default, when XMP is disabled, T-Force Delta will run at 2400 MHz, CL15.

The height of the RAM is a point to pay special attention to before buying the T-Force Delta. Normally, RAM sticks have a height (at the highest point) around 35-40mm, but T-Force Delta goes up to 49mm. This can affect the installation of other components, especially if you are interested in playing with mATX cases, so consider the size before ordering.

Good performance, not much room for overclocking 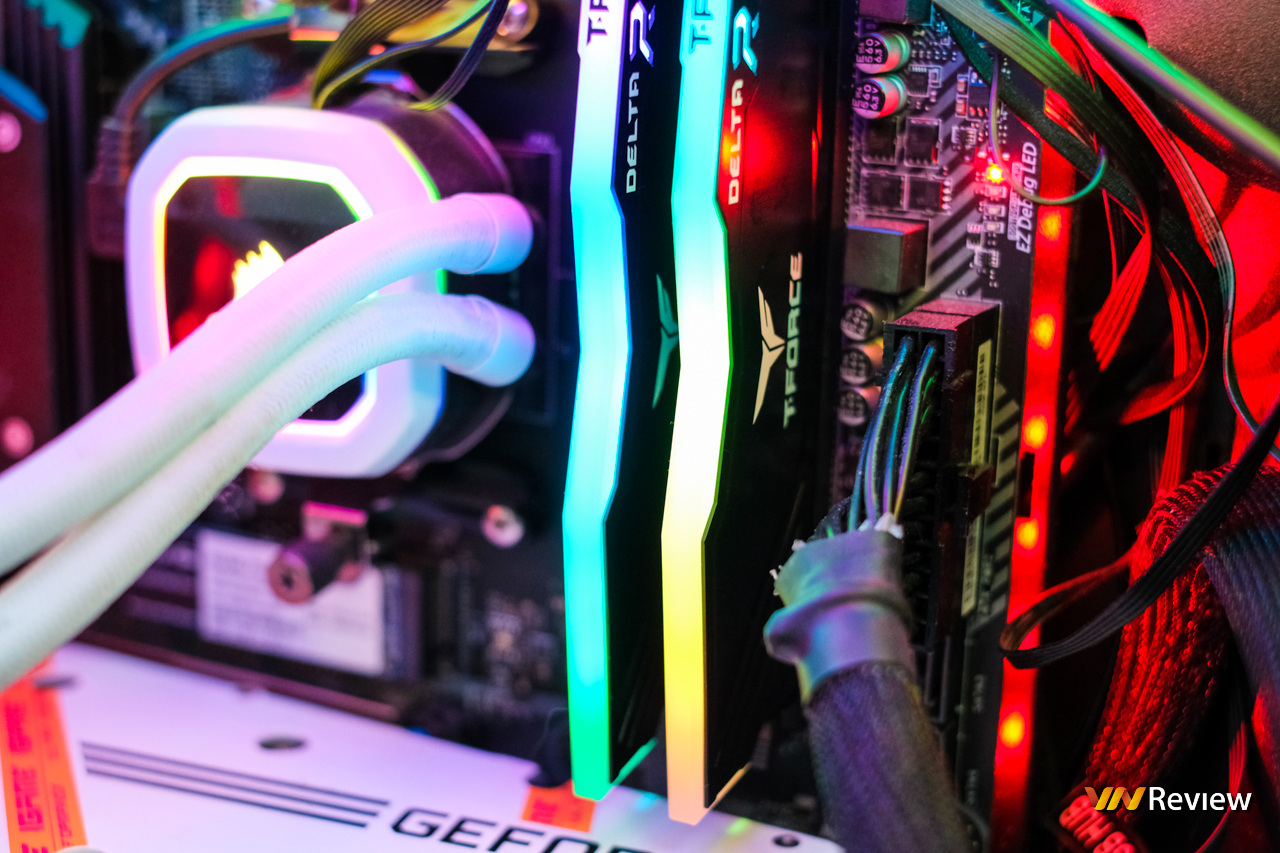 To evaluate the performance of T-Force Delta, VnReview uses a system including:

With AMD, specifically the 3000 series CPUs, the optimal clock rate for RAM will be at 3600 MHz to 3800 MHz, because at this time the fabric clock runs at a 1:1 ratio and the highest clock around 1900 MHz. Take advantage of the Memory Try it feature! on the MSI board, I was able to overclock the T-Force Delta from 3200MHz to 3600MHz with timings CL18-22-22-42 respectively, the voltage remaining at 1.35V. Lowering the timing to CL18-20-20-40, the writer’s system can still enter Windows, but it is unstable, applications often crash. In addition, although TeamGroup offers an operating voltage of 1.2 to 1.4V for T-Force Delta, the writer does not recommend users to exceed the default 1.35V voltage on Ryzen computer systems.

The DA64 has a built-in Memory Benchmark, which measures the read/write/copy speed of RAM in MB/s . units

As can be seen, in the benchmarks, the T-Force Delta proved to be on par with the Corsair Vengeance Pro RAM kit in terms of performance, and only slightly inferior to the top T-Force XTreem. Overclocking to 3600 MHz helps the score on performance measurement applications increase by 3-5%, although it is quite unfortunate that this is already the “ceiling” level of this RAM kit. Tried with a few higher clock levels, accepting increased timing, T-Force Delta did not improve performance, even decreased, and the system proved unstable. 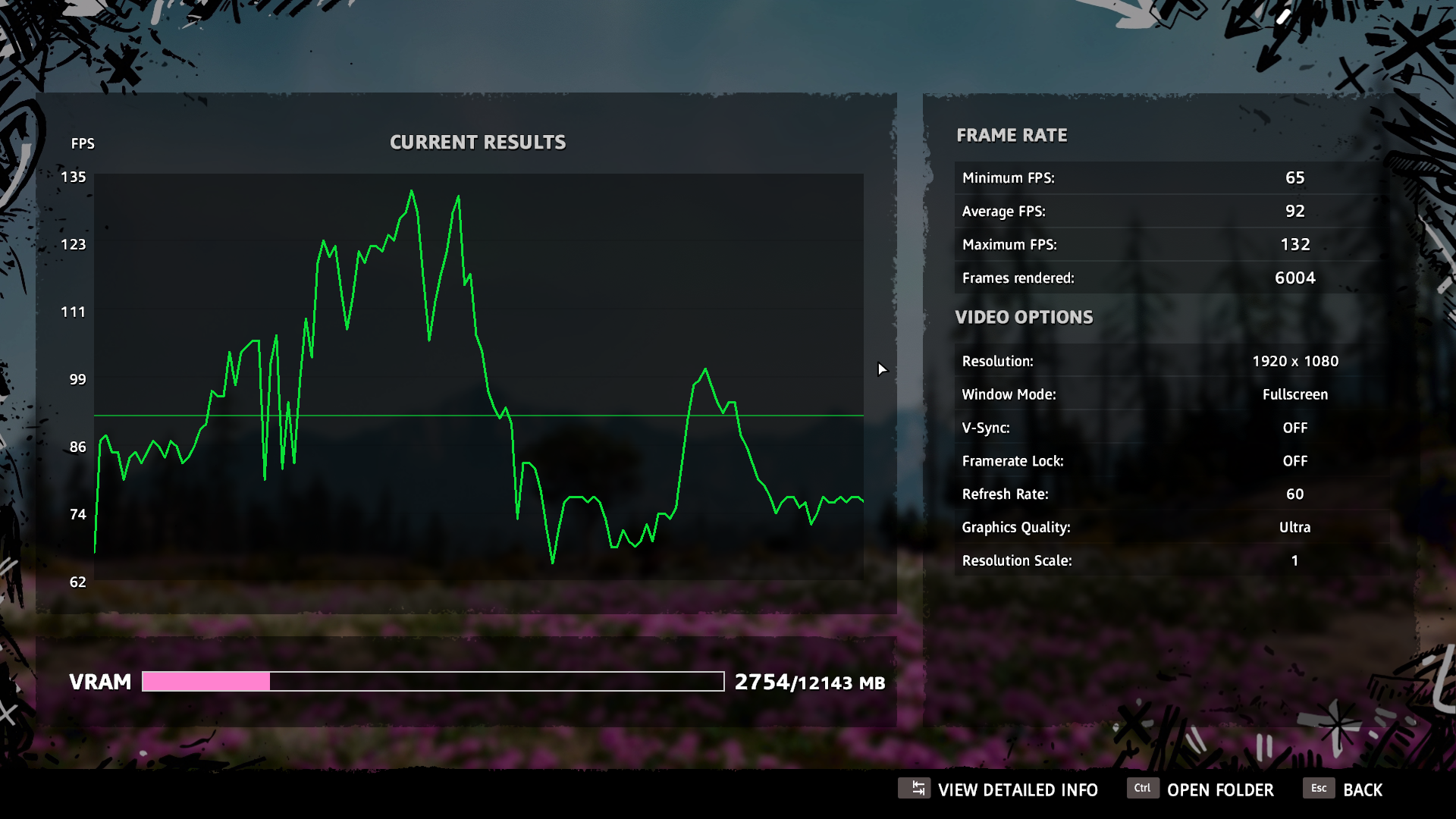 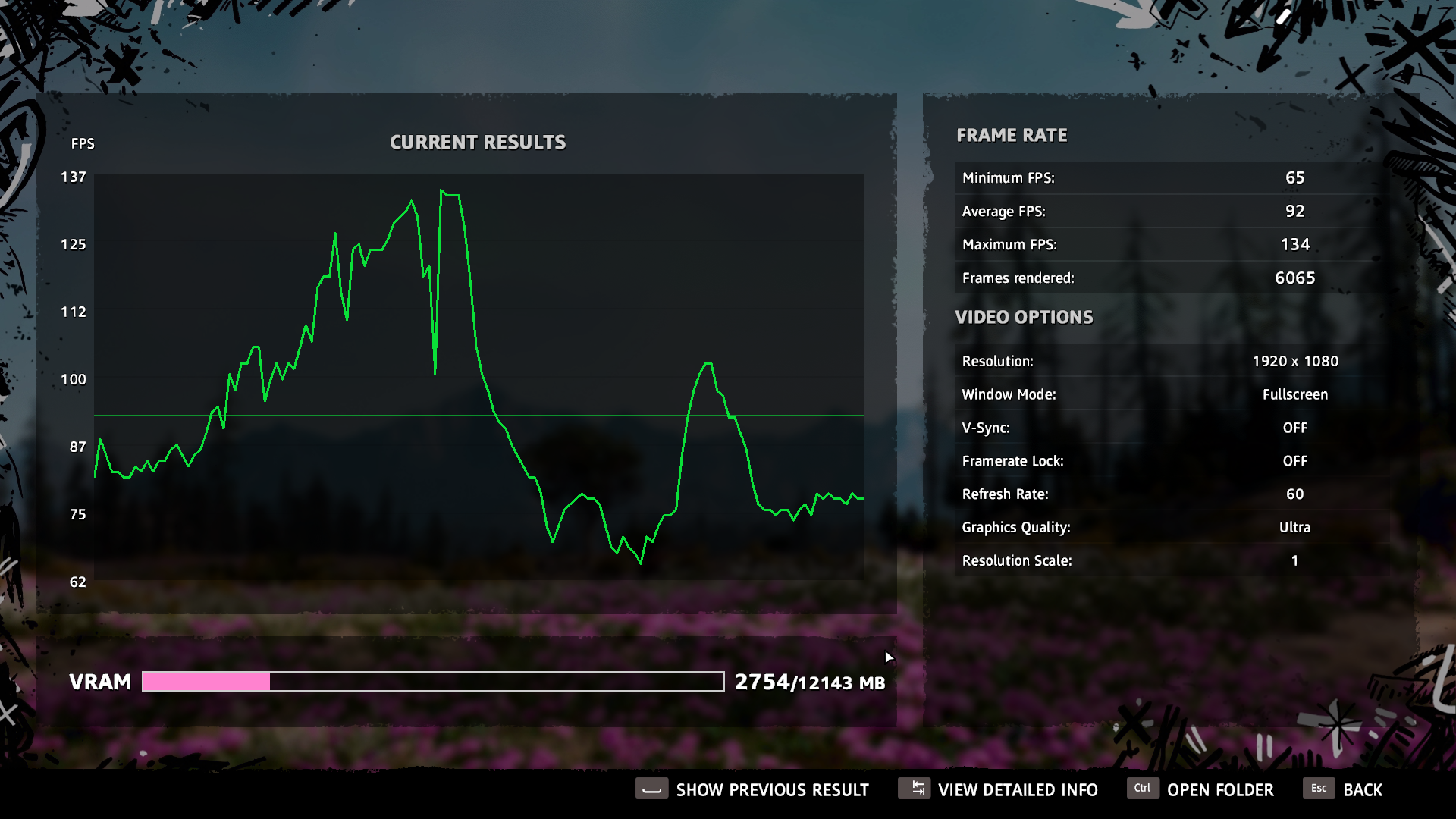 … and after overclocking the RAM T-Force Delta

In addition, the fast experience with Far Cry New Dawn, T-Force Delta overclocking helps the maximum number of frames per second (fps) increase from 132 to 134, and the number of rendered frames increases from 6004 to 6065. The difference is not so obvious that we can see with the naked eye, anyway, the RAM clock does not have too much impact on fps when playing games, the main role still belongs to the GPU.

In general, TeamGroup T-Force Delta possesses many plus points such as eye-catching design, beautiful bright RGB LED, good performance in the tasks put into the test. Although there are a few small limitations related to overclocking, this is still a RAM kit worth buying when the price is just under 4 million VND for 32GB capacity. If possible, you should decide early, when the shortage of chips is forecasted to increase the price of computer components in the second half of this year.